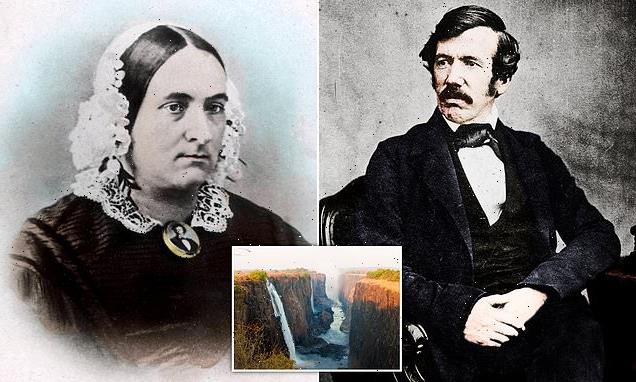 Mrs Livingstone, I presume? Her husband took the credit for exploring deepest Africa. But, as a major new exhibition reveals, it was all thanks to his even more fearless wife

For generations, the people of Tabora in what is now Tanzania told stories of the legendary Scottish explorer, Christian missionary and anti-slavery hero, Dr David Livingstone.

How, in 1855, he had discovered a spectacular waterfall which he named ‘Victoria Falls’, and subsequently reached the mouth of the Zambezi on the Indian Ocean to become the first European to cross the width of southern Africa.

‘Livingstone was like a man that had three wives, and yet none of them were women,’ they liked to say. ‘One was a river. The river they call the Nile. The second was the struggle against slavery. The third, religion.’

But there was also a real wife, whom Livingstone once described in a letter to a friend as ‘a little thick-black-haired girl, sturdy and all I want’; and, to another, as ‘like an Irish manufactory’ in her ability to produce children. 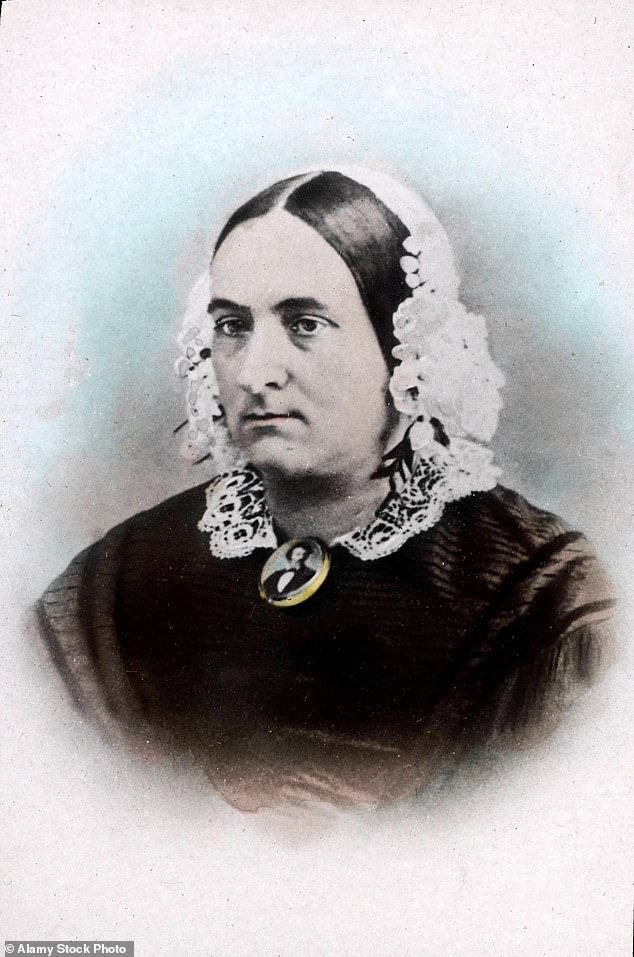 For generations, the people of Tabora in what is now Tanzania told stories of the legendary Scottish explorer, Christian missionary and anti-slavery hero, Dr David Livingstone. Mary Moffatt (pictured) however, was far, far more than that

Mary Moffatt, however, was far, far more than that. She was strong, educated, fearless, spoke six African languages and was a seasoned traveller. Crucially, as the daughter of missionaries, she was renowned in South Africa.

In fact, it was her father, Robert Moffatt, famed translator of the Bible into Setswana (spoken in Botswana and South Africa), who inspired Livingstone to become a missionary in the first place.

So it was Mary who, in remote areas, opened doors for her singularly driven husband with her languages and connections. And Mary to whom tribal leaders would often insist on addressing first.

And, of course, Mary who, as well as running a home and an infant school, was by her husband’s side — with their young children — as they crossed the Kalahari desert, not once, but twice, surviving for months on biscuits and beans and once even going for an entire week with no water at all.

She endured appalling hardship, long separations, a sporadic paralysis caused by a post-natal stroke, and a final battle with malaria.

But none of that, for one minute, dimmed her adoration for her husband. So what a shame this amazing woman — once described as ‘Livingstone’s greatest asset’ — was all but wiped from the annals of history by macho biographers. 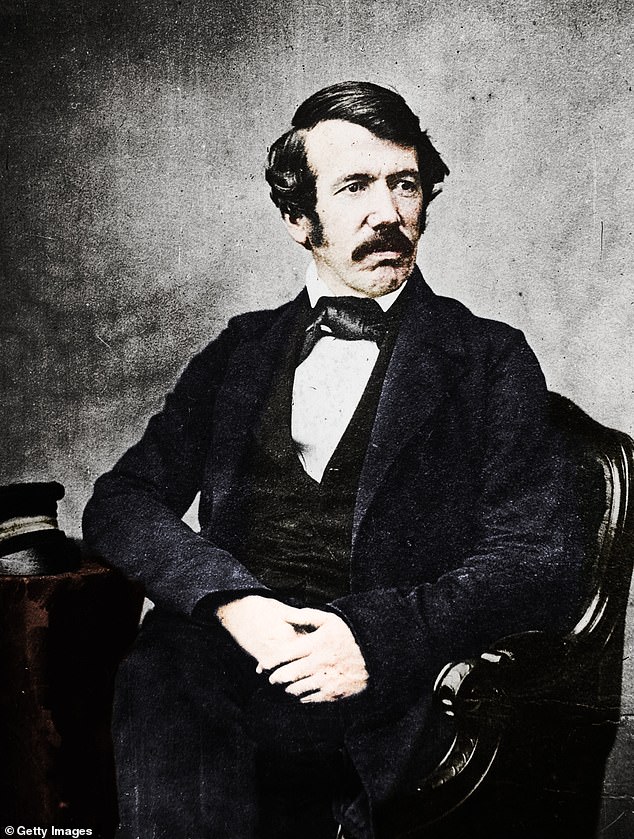 ‘Livingstone (pictured) was like a man that had three wives, and yet none of them were women,’ they liked to say. ‘One was a river. The river they call the Nile. The second was the struggle against slavery. The third, religion’

They, instead, created the myth of the fearless lone expeditionist, the single man missing in the African bush until, one day in 1871, he was supposedly rediscovered by Welsh cartographer and explorer Henry Stanley with the words: ‘Dr Livingstone, I presume?’

Happily, not for much longer. Because when the David Livingstone Birthplace museum in Lanarkshire reopens next month after a £9.1 millon revamp, Mary’s contribution will finally be given due credit.

As Dr Kate Simpson, a Glasgow University academic and museum trustee, puts it: ‘She was determined and independent and had a rod of iron. She did everything Livingstone did, and a lot more.’

Such as keeping house, producing baby after baby, running a school — as well as being the first European woman to cross the Kalahari Desert.

Mary was always going to be a bit different from her Victorian peers. The eldest of nine children born to Scottish missionaries, she grew up on a station in South Africa where she was encouraged to be independent from a young age — travelling hundreds of miles alone to school in Cape Town. She was 23 and training to become a teacher when she met Livingstone at the Moffatt missionary station in South Africa, where he — a 31-year-old medical missionary — was recovering after being bitten by a lion.

‘Sturdy’ Mary may not have been a great beauty, but she clearly had something special, because Livingstone wooed her with letters detailing his ‘strong desire to become better acquainted’, all signed ‘your confiding lover’.

Within weeks, his lifelong vow never to marry went up in smoke. 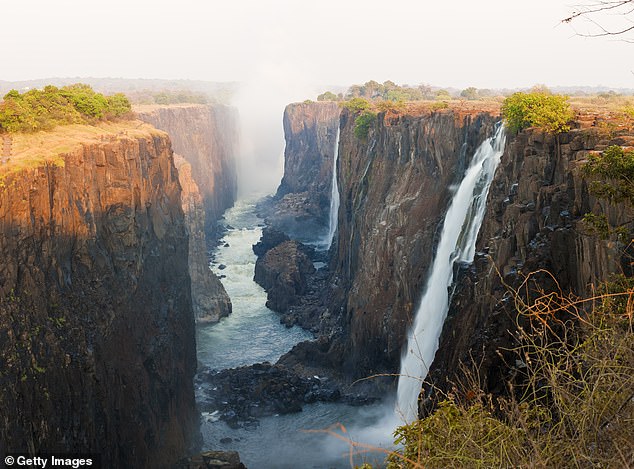 How, in 1855, he had discovered a spectacular waterfall which he named ‘Victoria Falls’ (pictured), and subsequently reached the mouth of the Zambezi on the Indian Ocean to become the first European to cross the width of southern Africa

They wed in 1845 and, in just seven years, built their own house, created three mission stations from scratch and weathered two years of droughts, failed crops and the constant threat of lions.

Through it all, the children came thick and fast while Livingstone took himself off on solo expeditions and started obsessing about crossing the Kalahari and single-handedly opening up Africa to trade and Christianity.

Of course, many wives would happily have waved him off. But not Mary. ‘She did it willingly. She wasn’t forced on expeditions,’ says Dr Simpson. ‘She loved him. And he loved her, very much.’

Crucially, Livingstone also realised how much he relied on his wife — not just for food, comfort and making his pants (or ‘my inexpressibles’ as he called them), but to smooth his passage. Some tribal leaders refused to speak to him, unless Mary was present.

It was a disaster. One of their ox wagons overturned, the children needed constant supervision and they all lived on rations and dangerously muddy water.

They were plagued by tsetse flies, bitten by mosquitoes, and soon two of the three children were suffering from malaria.

Just when it seemed things couldn’t get any worse, Mary gave birth in the bush, in a procedure so traumatic it caused a stroke and partial paralysis. Her poor, malnourished baby, Elizabeth, survived just six weeks.

When the family limped home, suffering etched on their skinny frames, Mary’s parents finally lost all patience with their son-in-law and his reckless endeavours.

But Livingstone was insulated by his godly zeal, and Mary by love. In April 1851, once again, they all set off back across the Kalahari and as far as the Zambezi River.

This time, they were so dehydrated their tongues turned black. Again Mary gave birth, ‘quietly and without complaint’, to Oswell. And so it continued. Because the further Livingstone travelled, the greater his ambition. ‘He’d justify it by saying ‘I’m doing God’s work’, but he chose to travel above being a missionary,’ says Dr Simpson.

Which meant that, having encountered the Zambezi, he was desperate to explore it fully: a trip he realised would take at least two years and was better done alone.

So this time Mary and the children were sent to Scotland to stay with his elderly parents while he set off with his team.

Two years stretched to four-and-a-half, as Livingstone forged through Africa. Mary, meanwhile, struggled in Lanarkshire with her in-laws and four children.

Despite endless entreaties to the missionary society for funding (and to her husband to come home), she was penniless and lonely, finding comfort in alcohol.

Yet when her husband eventually turned up, instead of threatening him with divorce, Mary wrote him this poem:

‘Do you think I would reproach you with the sorrows that I bore?

Since the sorrow is all over, now I have you here once more.

There’s nothing but the gladness, and the love within my heart.

And the hope so sweet and certain, that again we’ll never part.’

Then — after leaving the four children and yet another new baby, Anna Mary — she followed him back to Africa to accompany him on his second Zambezi trip.

This time, sadly, the joy had gone. Still drinking heavily, struggling with her faith and thousands of miles from her beloved children, Mary contracted malaria.

Aged just 41, she died under a baobab tree in her husband’s arms. Bowed by grief, he dedicated the rest of his life to exploration. ‘I am left alone in the world by one whom I felt to be a part of myself,’ wrote Livingstone. ‘The loss of my ever dear Mary lies like a heavy weight on my heart.’

Theirs was an unusual union. Mary adored Livingstone and there is no doubt that he loved his ‘thick-black-haired girl’, too. He just loved exploration and adventure a bit more.