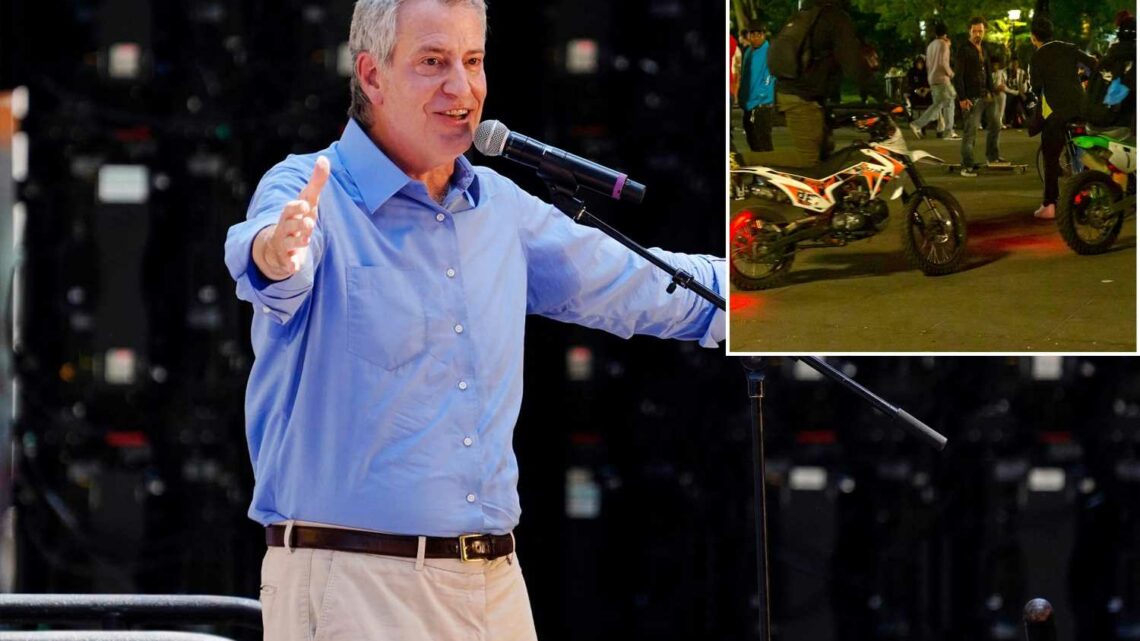 Hizzoner sent a nothing-to-see-here message to New Yorkers on Monday, as he shrugged off concerns about the mayhem and violence overrunning the famed Greenwich Village green space in recent weeks.

“We’ve had some particular issues for a limited period of time in Washington Square Park, and there’s been an effort to figure out the right approach,” de Blasio said during a news briefing at City Hall.

Those “particular issues” include a weekend of park pandemonium, in which two people were knifed, a man was beaten and robbed and an elderly cook was left bloodied after a vicious attack at a near-by diner.

De Blasio’s statements also came after at least 200 people were allowed to remain inside the park past the midnight closing time Sunday into Monday, dancing, drinking and swimming in the iconic fountain.

Despite that, de Blasio thinks things are generally okay at the park.

“We’ve had a number of nights where things went pretty smoothly,” he downplayed. “We had a few nights where they didn’t, but it’s going to, I think, lead to a natural outcome here.”

Area residents scoffed at de Blasio’s idea that the situation would resolve itself.

“Not everyone has the luxury of living in Gracie Mansion,” a neighbor who gave her name as Caroline C., 37, told The Post on Monday.

“I don’t foresee the nightly mayhem in the park going away naturally,” she added. “ I just see a continuation of sleepless nights for me.”

Lindsey Clapp, 40, said she no longer feels safe cutting through the park after 8 p.m. because “I’m scared someone will mug me.”

“There is no respect for people that pay money to live in a neighborhood that typically felt like home,” said Clapp, who works in marketing. “Now it feels like I’m the stranger, and after two years of COVID, I expected more out of my fellow New Yorkers.”

“Problems tend not to solve themselves naturally and you have to do something about them — especially when you’re the mayor of New York,” said 82-year-old Patricia Spadvech, a neighborhood resident of 30 years.

“The buck stops with de Blasio,” she said.

But the regular midnight closing time was reinstated this weekend — and the space once again devolved into a chaotic free-for-all.

Still, the mayor took a rosy view of the situation, saying that “I really think that what the Parks Department and NYPD are trying to do is reset the balance properly. They’re experimenting with different approaches to get it right.”

“We’re going to keep working on it, led by Parks Department, determine the right closing time, and I think we’ll get into a pattern that works pretty soon.”

“We’ve seen historically that closing times are implemented pretty smoothly all over the city, Parks Department, and if sometimes they need some NYPD help, that’s fine,” he told reporters.

On Sunday, one man was arrested about a block away from the park just before 9 p.m. for allegedly vandalizing eight vehicles in the area with white spray paint.

Later, cops appeared to turn a blind eye to a group of men doing loops around the space on loud motorcycles after 12:30 p.m. on Monday morning.

No arrests were made overnight on Saturday, when chaos reigned once again, with a man dressed as “The Joker” assaulting another in the wee hours of Sunday.

Violence also spun out of control in and around the park on Friday into Saturday.

Law enforcement sources told The Post that cops didn’t close the space over the weekend because the parks department didn’t request their help in doing so.

According to the parks department, the last time closure was enforced was June 5, when the 10 p.m. curfew was still in effect. That night, cops in riot gear clashed with the curfew-breaking revelers, leading to 22 people being arrested and five officers getting injured.

Another police source said that, “Of course our hands are tied.”

“Everything we do, we’re on display,” the longtime officer said. “Guys are worried about their pensions and careers.”

The NYPD’s 6th precinct will be holding a public meeting on Wednesday to hear public safety concerns around the park.

A department spokesperson previously told The Post that, “Any changes of park closing times, earlier or later, are at the direction of the Parks Department.”

“We continue to work with PD to find the right balance of education and enforcement against illegal and after hour activities that impact the park and the neighborhood,” the parks department said in a statement.

“Closures can change in real-time when circumstances are warranted.”