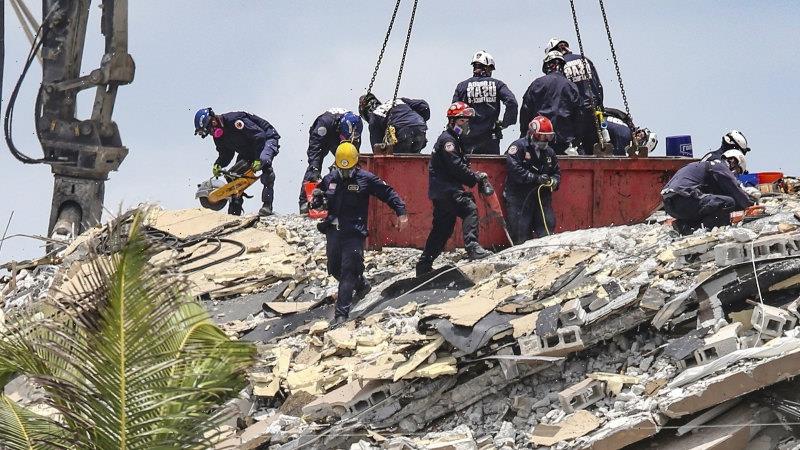 Miami: As the death toll rose to nine with more than 150 people still missing, rescue teams on Sunday kept picking through the rubble of the Florida condo building that collapsed three days ago, as questions swirled about the tower’s structural integrity.

Officials in Surfside, the shore town near Miami where the building stood along the oceanfront, said hope remained that search teams would discover survivors in air pockets that may have formed in the pancaked debris.

Even so, Fire Chief Alan Cominsky said on Sunday crews had yet to find any signs of life. 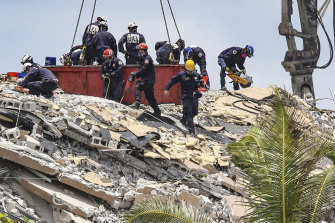 Searchers continue the challenging search as the death rose. Credit:

A smouldering fire beneath the rubble that produced thick smoke and hindered the work of rescuers has abated, officials said. The mayor said a trench was dug to separate the areas of smoking debris from the rest of the rubble and rescuers are also using tunnels.

Some families of those missing have provided DNA samples to officials while others recounted narrow escapes. Police released the names of four victims who ranged in age from 54 to 83.

One of the residents, Erick de Moura, considers himself very lucky. He was supposed to be home when the building collapsed, but his girlfriend persuaded him to spend the night at her place less than 3km away in Miami Beach, likely saving his life.

“Only by God. To me this is a miracle,” the 40-year-old Brazil native told Reuters. 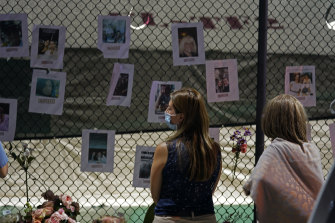 A makeshift memorial displays photos of some of the missing people. Credit:

Photographs of the missing were posted on a nearby fence, along with flowers and messages. On Saturday, family members prayed and kept a silent vigil at a barrier erected on the beach by authorities several hundred yards north of the building site. They declined to comment.

Officials said on Saturday that Miami-Dade County would audit all buildings more than 40 years old within the next 30 days to ensure their safety.

“Once we understand, legislation will be taking place so that this will never happen again,” County Commissioner Pepe Diaz said.

Surfside officials have released documents including an engineer’s report from 2018 that found major structural damage beneath the pool deck and “concrete deterioration” in the underground parking garage of the 12-storey condominium.

The report estimated it would cost $9.1 million ($11.9m) to make the recommended repairs. Berger said the board had taken out a $12 million line of credit to pay for the repairs and asked owners to pay $80,000 each. Work had started on replacing the roof, but the pandemic slowed the project, she said.

Gregg Schlesinger, a lawyer and former general contractor who specialises in construction-failure cases, said investigations and the inevitable lawsuits will eventually paint a full picture of what caused the disaster.

He said all seaside buildings in the area should be inspected every five years to ensure they have not been degraded by the corrosive salt air, not just those over 40 years old.