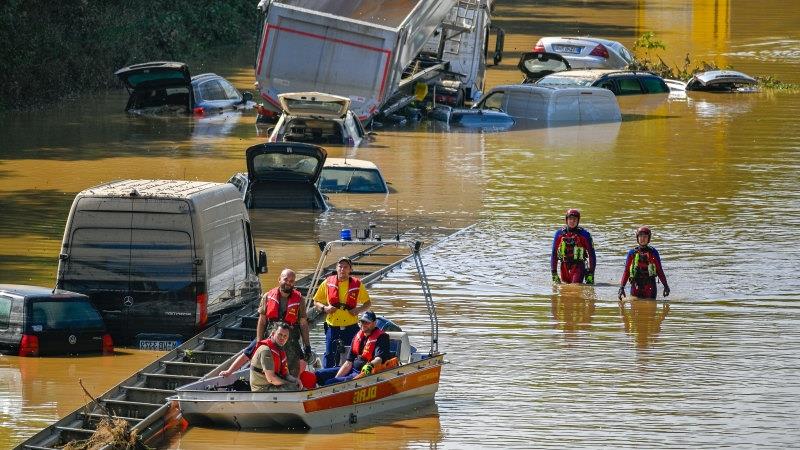 Germany: The death toll in devastating flooding in western Germany and Belgium rose to at least 170 on Saturday after burst rivers and flash floods this week collapsed houses and ripped up roads and power lines.

Some 143 people died in the flooding in Germany’s worst natural disaster in more than half a century. That included about 98 in the Ahrweiler district south of Cologne, according to police.

Hundreds of people were still missing or unreachable as several areas were inaccessible due to high water levels while communication in some places was still down.

Residents and business owners struggled to pick up the pieces in battered towns.

“Everything is completely destroyed. You don’t recognise the scenery,” said Michael Lang, owner of a wine shop in the town of Bad Neuenahr-Ahrweiler in Ahrweiler, fighting back tears.

German President Frank-Walter Steinmeier visited Erftstadt in the state of North Rhine-Westphalia, where the disaster killed at least 45 people.

“We mourn with those that have lost friends, acquaintances, family members,” he said. “Their fate is ripping our hearts apart.”

Around 700 residents were evacuated late on Friday after a dam broke in the town of Wassenberg near Cologne, authorities said.

But Wassenberg mayor Marcel Maurer said water levels had been stabilising since the night. “It’s too early to give the all-clear but we are cautiously optimistic,” he said.

The Steinbachtal dam in western Germany, however, remained at risk of breaching, authorities said after some 4,500 people were evacuated from homes downstream.

In Belgium, the death toll rose to 27, according to the national crisis centre, which is coordinating the relief operation there.

It added that 103 people were “missing or unreachable”. Some were likely unreachable because they could not recharge mobile phones or were in hospital without identity papers, the centre said. 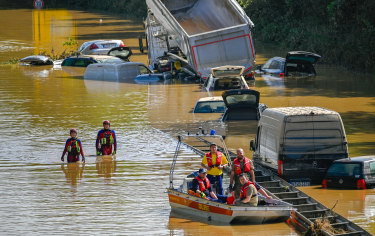 Search and rescue teams are seen on a flooded and damaged part of the highway in a German town. Credit:

Over the past several days the floods, which have mostly hit the German states of Rhineland Palatinate and North Rhine-Westphalia and eastern Belgium, have cut off entire communities from power and communications.

Emergency services in the Netherlands also remained on high alert as overflowing rivers threatened towns and villages throughout the southern province of Limburg.

Tens of thousands of residents in the region have been evacuated in the past two days, while soldiers, fire brigades and volunteers worked frantically throughout Friday night to enforce dykes and prevent flooding.

How to live longer: Best protein to slash risk for premature death up to 24 percent