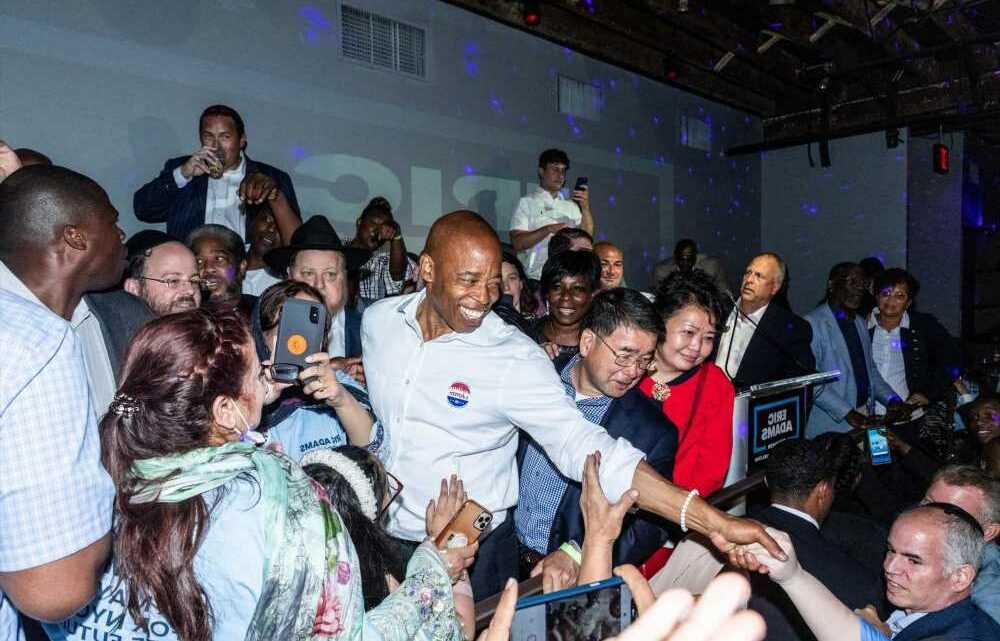 Eric Adams is our shot to restore order in NYC: Goodwin

It’d be a crime if NYC's next mayor is not the anti-de Blasio: Goodwin

With his declaration that “I am the face of the Democratic Party” and vow that “I am going to show America how to run a city,” Eric Adams is putting bold markers on the future, and not just his own. He is right that solving New York’s crime problem would lift his party’s fortunes — but the reverse is true, too.

A failure by Adams could usher in the end of the Dems’ dominance in urban America.

That the stakes are so high even before Adams secures his party’s nomination for mayor and wins the general election illustrates how murder and mayhem have rocketed to the top of voters’ concerns.

A year ago, Joe Biden accepted the nomination for president at a virtual convention where the rioting and looting in American cities was barely mentioned.

Just last week, Biden finally addressed the raging violence by saying crime-ravaged cities could use their COVID-relief money to hire more cops. That’s certainly a switch from a president who fueled the anti-police movement by repeatedly calling law enforcement and the criminal-justice process “systemically racist.”

That phrase was thankfully absent when Biden spoke Thursday. He will shelve it for good if he really wants public safety as well as police reform.

To be sure, race and policing are linked at the hip, and because Adams lives on both sides of the combustible issue, his mayoralty would have a special resonance. A former captain in the NYPD, he said he was brutalized by police as a teenager and, while on the force, was a constant critic.

One result of that history is widespread skepticism among many police veterans and other New Yorkers about his crime-fighting commitment.

At the same time, his experiences added to his credibility among many nonwhite voters who suffer from high crime but are not always enamored of the police response.

Election patterns show Adams built his margin of 75,000 votes in working-class black and Latino neighborhoods outside Manhattan. Facing seven other well-funded candidates, he won more than 60 percent of the vote in Jamaica in Southeast Queens and more than 45 percent in Mott Haven in The Bronx, according to one analysis.

The optimistic view is that a Mayor Adams would have the opportunity to write a new chapter in urban policing. The “broken windows” theory that Rudy Giuliani and Bill Bratton adopted to begin the taming of New York nearly three decades ago has been discarded in Gotham and many other places where it was adopted.

Because it was never replaced with an effective alternative, criminal violence and disorder filled the vacuum. Now the burden falls on Democrats to find a new way to establish and keep the peace.

All true — but first Adams has to back up his promise with results. Statistics will tell much of the story, but the real test will be whether New Yorkers actually feel safer because of his policies.

To achieve that, he’ll need to shape a new consensus about acceptable police tactics and get prosecutors and legislators to end the revolving doors at courthouses where too many arrested suspects are immediately released. Those are enormous hurdles and Adams should begin the selling job early, while he still enjoys a political honeymoon.

His plan to reinstitute an undercover anti-gun team is essential, but he must also protect it from inevitable criticism. If it is not well thought out and creates so many problems that he has to backtrack, that would be a green light to thugs.

There is also the crucial matter of managing flashpoint incidents. As it stands, much of the left in New York starts by assuming cops are always wrong, making every police shooting a potential spark for disturbances.

Adams could do worse than follow one of Giuliani’s habits. To stop the stampede of public opinion, Giuliani urged that officers involved in controversial actions be given the benefit of the doubt until all the facts were known.

Far more often than not, those facts showed police were justified by revealing mitigating circumstances that were not immediately apparent.

Of course, public patience is harder to achieve now that both police and witnesses have cameras. Still, it is worthwhile for Adams to emphasize that not everything is as it appears and to lead by example in allowing time for the facts to emerge.

His most important appointee will be his police commissioner, whom he said would be a woman. In addition to stopping the endless gunplay, it will be her responsibility to prevent violent protests from getting out of hand. Nothing saps public confidence in City Hall faster than unchecked rioting, whatever the initial spark.

Giving police the benefit of the doubt would also help change the attitude of the officers themselves. It is no secret that many in the NYPD feel abandoned by the public and political class.

Retirements are hitting record highs and it is understandable that many active officers have become more reluctant to engage in situations where they will face resistance.

In that regard, Adams was on target with his criticism of the City Council for passing a chokehold ban without consulting police organizations.

“I’m opposed to the chokehold . . . but when you’re saying you cannot touch someone’s chest . . . it’s just not realistic” he said on MSNBC.

The long journey to a safe and orderly New York is beginning, and Adams’ initial steps are promising. Godspeed to him in this essential mission.

Never again ask why Sen. Kirsten Gillibrand is considered by all of Washington to be irrelevant. Her latest stunt explains all.

In a news conference and in an e-mail, New York’s very junior senator pushed high-speed passenger rail for the entire nation, at a cost of how many gazillions she doesn’t say.

To entice New Yorkers to back the spend-a-palooza, she offers this come-on: “Imagine,” she writes, “New York City to Albany in 36 minutes.”

Whoa, heart be still — if you’re a legislator or lobbyist and forced to go to Albany.

Otherwise, imagine we get a real senator.

That’s a cold hard no

Headline: The Cryonics Industry Would Like to Give You the Past Year Back.

From The Wall Street Journal:

“U.S. intelligence officials reviewing dozens of reports of mysterious flying objects found 18 in which the objects displayed no visible propulsion or appeared to use technology beyond the known capabilities of the U.S. or its adversaries, according to an intelligence report released Friday.”

In other words, they’re out there — and have superior technology.

Gemini weekly horoscope: What your star sign has in store for June 27 – July 3