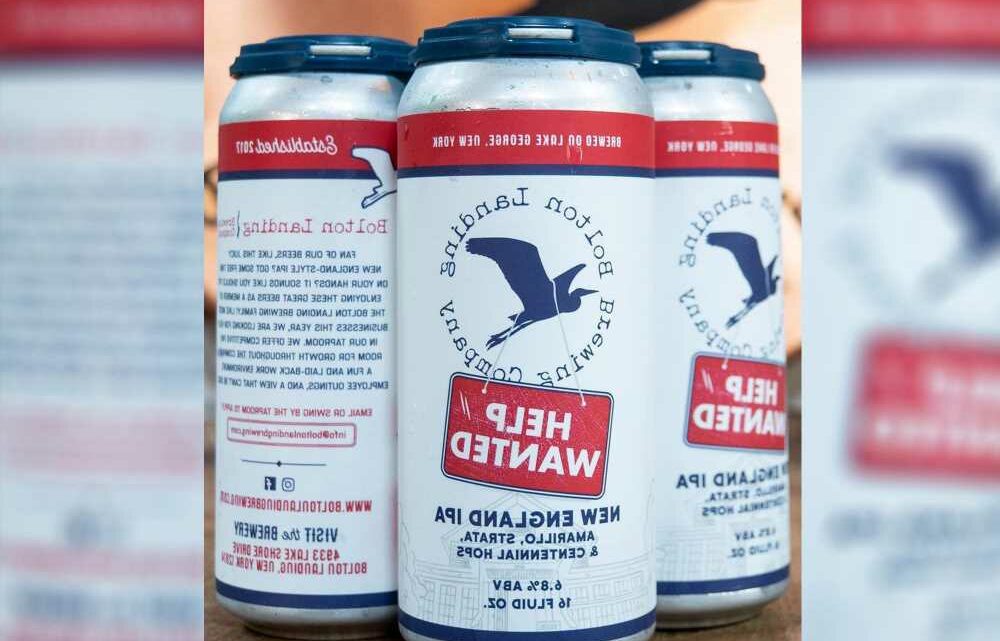 Can I reveal my amorous feelings to someone on my staff?

Nearly 2M Americans have turned down jobs due to unemployment benefits: poll

NYC’s next mayor faces $5.4B deficit after de Blasio adds another $300M

An upstate brewery is so desperate in its search for workers amid New York’s attempted pandemic recovery that it has created a new beer called “Help Wanted” — with a job posting on the can.

“Like most businesses this year, we are looking for help in our taproom,” says the ad from the brewery, which is located less than a mile from Lake George and about a 20-minute drive from the popular summer resort’s main drag.

“We offer competitive pay, room for growth throughout the company, a fun and laid-back work environment, employee outings, and a view that can’t be beat. Email or swing by the taproom to apply,” the blue-and-red-lettered advertisement reads.

Company President Brendan Murnane, 34, told The Post that since he opened the business in 2017 with his father, John Murnane, 68, they previously had little problem hiring extra workers to help out with the busier summer season.

But this year, not a single applicant inquired between May and June about any of the company’s seven open full- and part- time positions.

The positions include a key kitchen job vacated by a worker who told Murnane he was leaving because he would rather cash unemployment checks.

“If you’re getting paid to stay at home and enjoy the lake for the summertime, a lot of people would be crazy to not take [the government] up on that,” Murnane said.

“Yeah, it would be nice to spend the summer on the lake,” he said. “But you have to go to work, too.

“Now, everyone is coming up here, and we’ve been doing a lot of business, but we’re dealing with the fact that we don’t have enough bodies to serve everyone,” lamented the owner, whose business includes a tap room and kitchen.

He noted that he has been working seven days a week in his normal role managing the business — which also helping to prepare lunch and dinner so his chef can take days off.

Murnane said the workforce crunch — as well as the fact that some of his food suppliers are unable to get the items he needs post-pandemic — have forced the brewery to cut its menu in half, removing all sandwiches and burgers.

The owner said the worker strain is also putting pressure on his current labor force: The company’s indoor taproom fills up at a 40-person capacity, but the back yard could pack up to 100 people.

The idea for the “Help Wanted” beer surfaced several weeks ago, when Murnane called a staff meeting to brainstorm solutions surrounding the hiring crisis, he said. The owner said his head brewer, Shaw Kerr, suggested they stick a job posting on the back of a soon-to-be released beer.

The beer was first released Friday, June 9, and so far, the brewery has received seven applicants — and one prospective hire.

The beer is sold for $7 on tap at the brewery and as a four-pack for $16 in-house. The four-packs are also peddled by beverage distributors across the state.

Murnane said the current supply is selling fast, and even though it should last a few more weeks, the company will be brewing another batch.

Customers are getting a kick out of the creativity but also sympathizing with the small business’s plight, Murnane said.

The state took a massive economic hit at the pandemic’s height. In May 2020, New York’s unemployment rate was more than 16 percent, according to its Labor Department.

The most recent figures posted in May 2021 show an improvement, with the figure at 6.9 percent statewide.

Individuals eligible to receive payments through New York’s unemployment system and federal pandemic emergency unemployment compensation program can collect up to a combined estimated $800 weekly. The latter program is set to expire Sept. 5.

Other businesses across the state have also complained it’s been tough to attract workers as the Empire State kicks into recovery mode while continuing to lift restrictions.

The New York City subway system had to cancel trains last month thanks to a shortage of staffers as the Big Apple’s underground transit artery resumed 24/7 service.

Some food suppliers have even resorted to hiring out-of-state truckers to deliver local goods and are paying to put them up in hotels, The Post has exclusively reported.

Ex-FDA head: Delta variant will be most serious virus for unvaccinated
Recent Posts