Harry and Meghan’s not-so-warm welcome: Duke and Duchess of Sussex run gauntlet of boos from 100-strong group of protesters – including one holding a sign accusing them of being ‘fake royals’ – while in UK for pseudo-royal tour

The Duke and Duchess of Sussex ran a gauntlet of boos as they arrived at the first public engagement of their pseudo-royal tour.

Harry and Meghan were met by demonstrators as they pulled up at Manchester’s Bridgewater Hall, despite using a decoy car and entering through a back door.

In the building, where Meghan would later give a keynote address at the One Young World summit for youth leaders, the welcome was warm.

But minutes earlier, as the couple climbed out of their car, many in a 100-strong crowd booed from behind a barrier just yards away, with onlookers saying it was so loud ‘there was no doubt they would have heard’. One protester was carrying a sign that read: ‘FO Harry and Me-Gain Fake Royals.’

A woman who gave her name as Janet, from Manchester, accused Meghan of being a ‘liar and a hypocrite’ and of launching an ‘attack’ on the Royal Family. 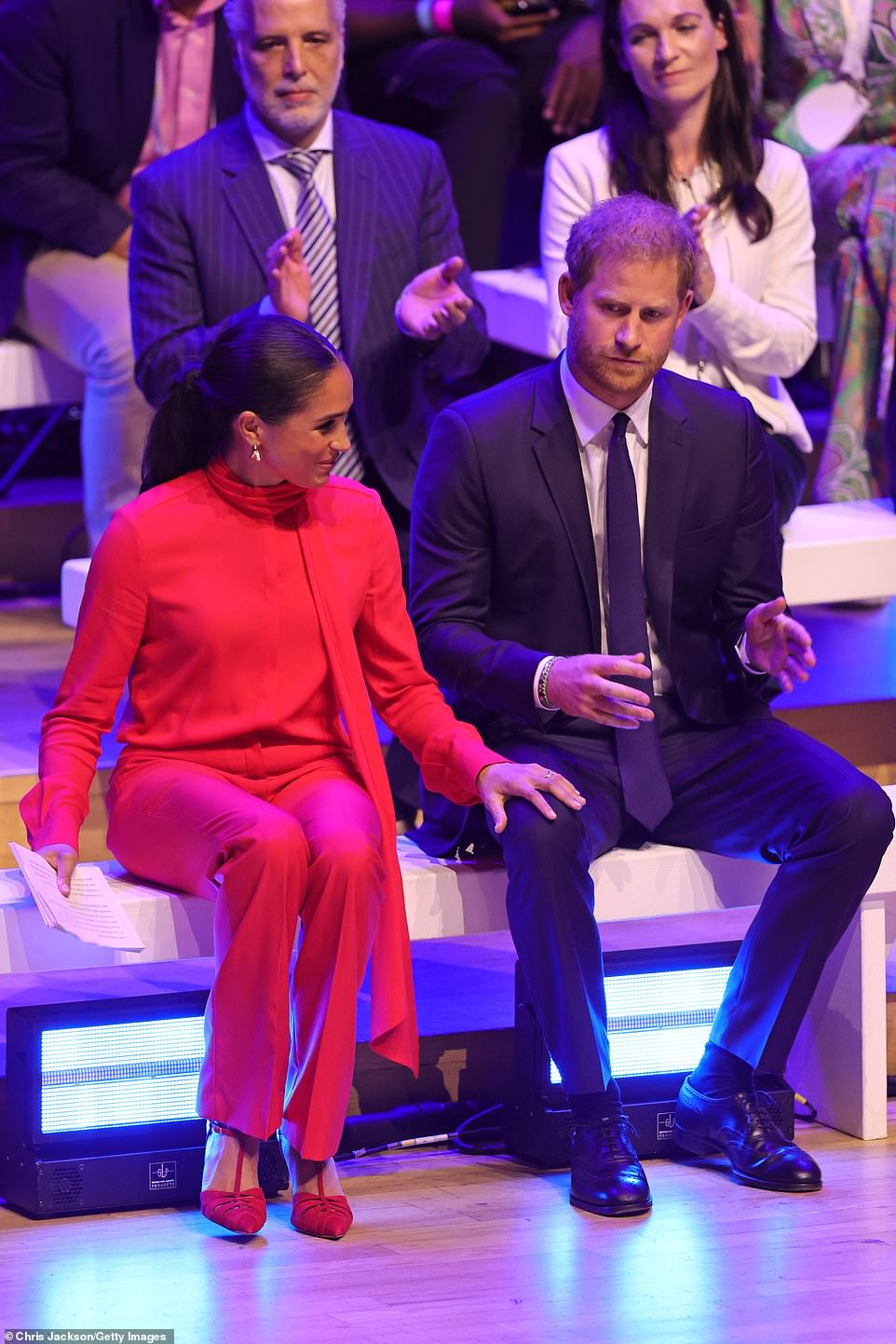 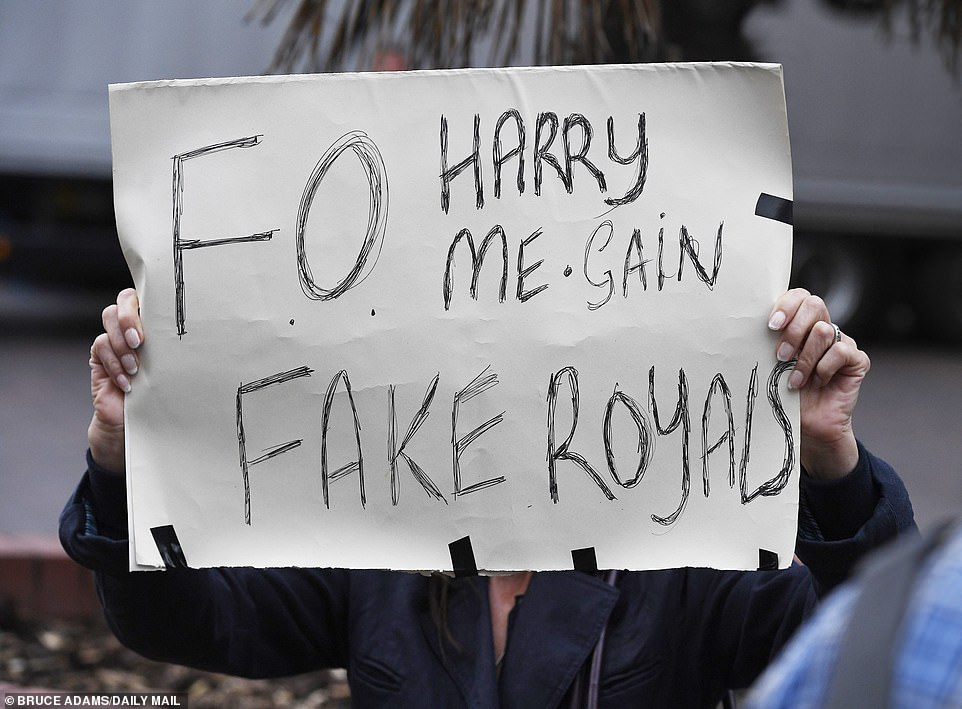 One protester was carrying a sign that read: ‘FO Harry and Me-Gain Fake Royals’ 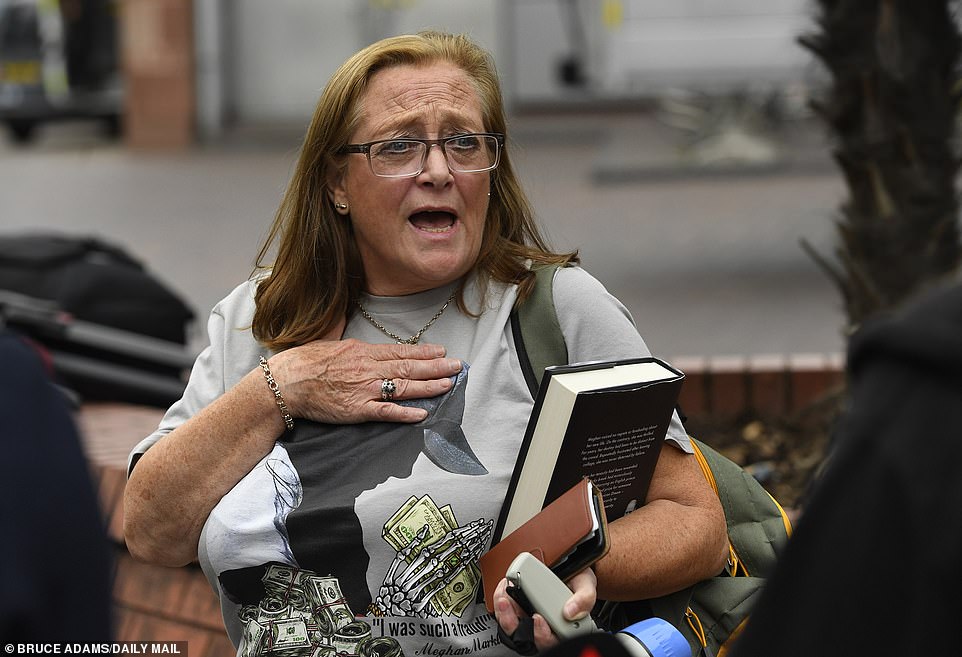 A woman who gave her name as Janet (pictured), accused Meghan of being a ‘liar and a hypocrite’

Meghan, Duchess of Sussex, gave a keynote speech about gender inequality to the audience of 2,000

‘She’s a fake humanitarian and a fake feminist,’ she said. ‘She’s a social climber… she thought she could be a celebrity in the Royal Family and she’s the most toxic, divisive woman I’ve ever heard of in my life.’

The woman, who was wearing a T-shirt bearing a skeletal hand clutching money and a quote from the duchess, said: ‘The Queen has been on the throne for 70 years and she’s had to put up with all this trouble. Meghan has used every card she can – racism, mental health, feminism. She’s not a feminist, she’s just a hypocrite.’

Another protester, called Anna, said: ‘I thought Meghan was going to be a breath of fresh air. But she’s had an ulterior motive from the start.

‘I’ve come here today primarily to make a point. She needs to live more honestly and she should have shown more respect as a member of the Royal Family.’

But Patricia Downs, 50, who travelled to Manchester from London because she’s a fan of the couple, said: ‘Meghan’s done nothing wrong. The only thing she did wrong – as a bi-racial woman – was marry a member of the Royal Family.

‘The media and the Royal Family have got an agenda against her.’

The duchess attended a round-table session with delegates on gender equality before making a speech at the One Young World summit’s opening ceremony. 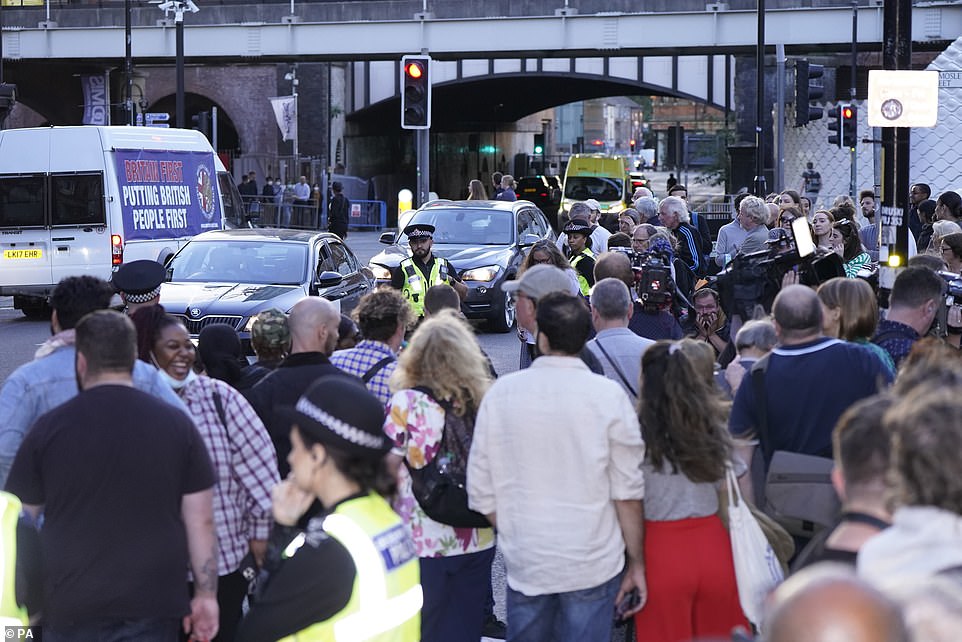 There was a large crowd gathered outside the building, many of the 100-strong crowd booed from behind a barrier 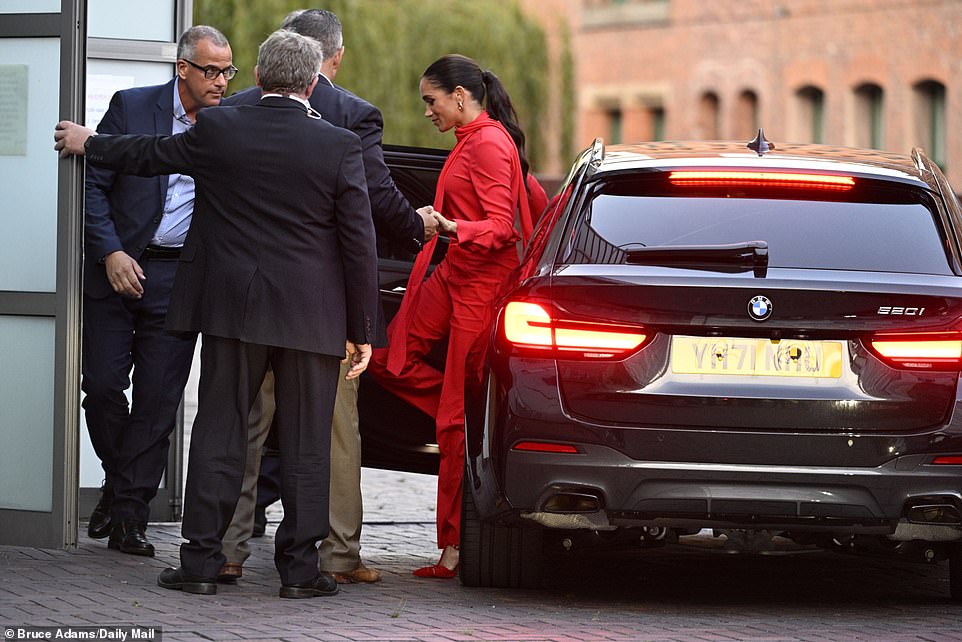 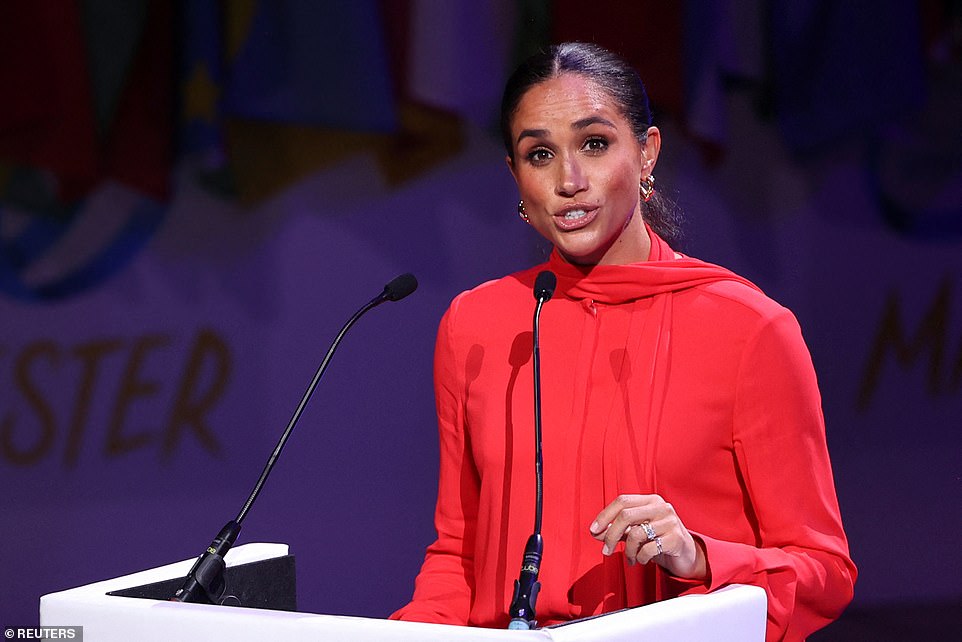 Meghan Markle left the stage to applause and a smattering of cheers, rather than boos

Addressing the 2,000-strong crowd, with representatives from 190 countries, she said it was ‘nice to be back in the UK’ and described them as ‘the future, but also the present, driving the positive and necessary change needed across the globe’.

She spoke of how she joined the One Young World organisation as a counsellor in 2014, describing her then-self as ‘young, ambitious and advocating for things I deeply and profoundly believed in’.

But the duchess said she was filled with self-doubt, branding herself ‘the girl from Suits’, adding: ‘I was surrounded by world leaders, humanitarians, prime ministers and activists that I had such a deep and longstanding respect and admiration for… and I was asked to pull up a seat at the table.’

She and Harry left the stage to applause and there were also a smattering of cheers, rather than boos this time, as they got into their car to catch the train back to London Euston.

The couple, who are staying at Frogmore Cottage on the Windsor estate, will today be in Germany for the launch of the Invictus Games Dusseldorf 2023, the Paralympic-style event for servicemen and women founded by the prince.

They will meet officials and potential competitors ahead of selection later this year, as well as athletes’ friends and family. On Thursday the couple will attend the WellChild Awards, which celebrate the bravery of young people from across the UK who have coped with a serious illness or disability. Harry is a long-term patron of the charity and kept the role after quitting royal duties.

Notably, media access to the awards, normally open to all, has been severely curtailed this year without any explanation. The structure of the Sussexes’ trip and nature of the engagements have the appearance of a typical royal tour.

One insider said archly that it was ‘ironic given they profess to hate everything about the institution and royal life’.

There was a time when the appointment of a new Prime Minister and the bowing out of the Home Secretary would have been no match for the stellar pulling-power of the Duchess of Sussex. But that was when she just seemed like a rather glamorous addition to a slightly fusty Royal Family: A ray of LA sunshine to brighten our – and Prince Harry’s – days.

Since then, a few truths have transpired – not all of them perhaps as she might have hoped. And the great British public – away from whom it seems the Duchess cannot get far enough – have, not entirely unreasonably, become somewhat more circumspect about her motives and intentions.

And so, what even six months ago might have been a whirlwind of flashbulbs and flowers began quietly, as the Duke and Duchess of Sussex spent the night in Frogmore Cottage, just a short walk from Harry’s brother and his family, newly installed on the Queen’s Windsor Estate.

Despite their proximity, they rather sadly spent the evening alone, before yesterday quietly boarding the 12.20pm Avanti West Coast Service to Manchester Piccadilly, where Meghan was due to deliver a speech on gender equality at the One Young World summit, an event which brings together young leaders from more than 190 countries. 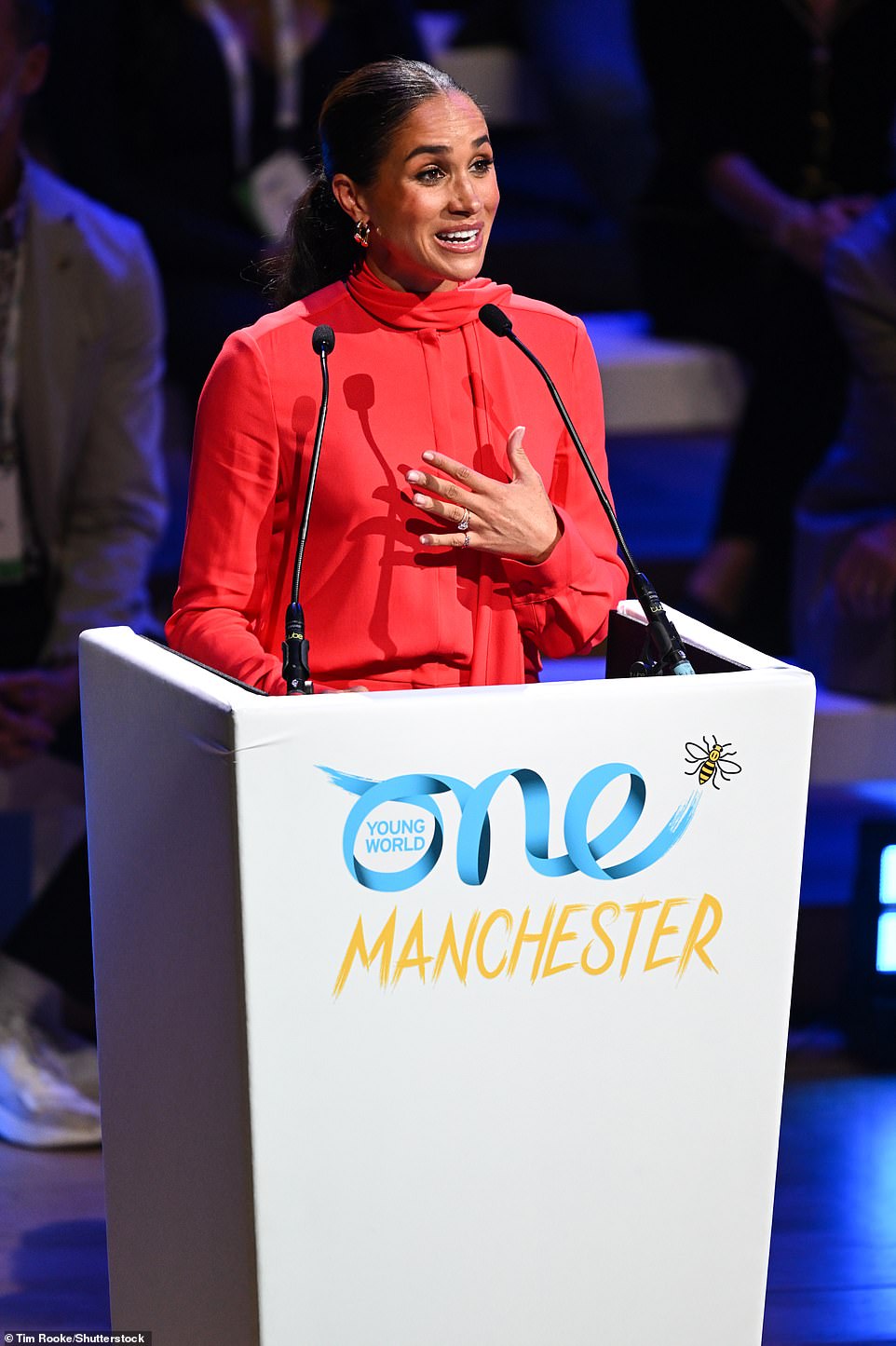 SARAH VINE: There was a time when the appointment of a new Prime Minister and the bowing out of the Home Secretary would have been no match for the stellar pulling-power of the Duchess of Sussex

By 6pm, barely a peep or a paparazzo shot appeared to have escaped the cordon of security surrounding them – paid for by the Prince himself, who is still in litigation with the Home Office about his right to police protection when on UK soil.

Could it be that, following a disastrous week in which the Duchess’s various utterances had earned her less-than-rave reviews, they had finally read the room and decided to keep thing rather more low key?

As the couple were pictured greeting the organisers on stage – Meghan resplendent in red – the online feed from the venue remained silent, a few hundred viewers waiting patiently for the main event.

Then, suddenly, we were live. A procession of young people took to the stage – from Moldova to Montenegro, waving flags to the strains of Move On Up. 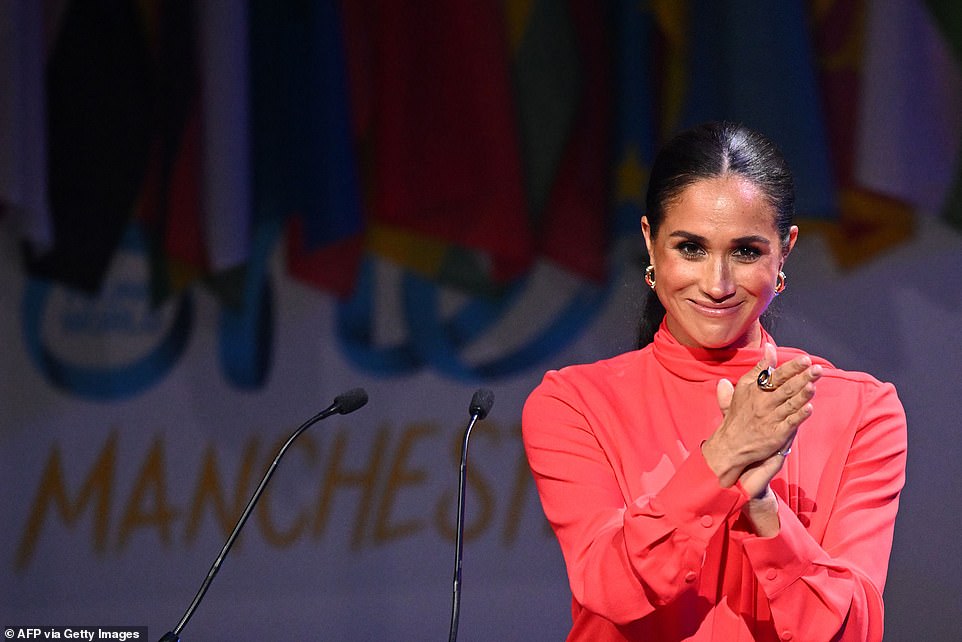 The great British public – away from whom it seems the Duchess cannot get far enough – have, not entirely unreasonably, become somewhat more circumspect about her motives and intentions

Harry and Meghan sat in the front row, smiling and clapping as the various representatives processed and the crowd cheered. Harry looked characteristically furious. Meghan had her best ‘interested’ smile on as the music segued into Aretha Franklin’s Respect. The American flagbearer waved encouragingly in her direction. Everyone stood up and did a bit of slightly awkward dad-dancing.

First up, a brief but heartfelt speech from the chair of the organisation, former Irish President Mary Robinson, quoting Nelson Mandela. Oh dear, had she not been briefed on the Duchess’s little recent faux pas – when Meghan claimed that her marriage to Prince Harry sparked scenes of joy in South Africa comparable to those on show when Mandela was released from prison? Next, Sir Bob Geldof himself. A big cheer when he mentioned Manchester’s mayor Andy Burnham, as well as the obligatory f-bomb and a dig at Boris Johnson.

And then it was Meghan’s turn. Poised, smiling, she took to the podium to tell the audience all about… Meghan. About how she has been with the organisation since 2014, about how humbled (tick), in awe (tick), nervous (tick) she felt about being in such incredible company. 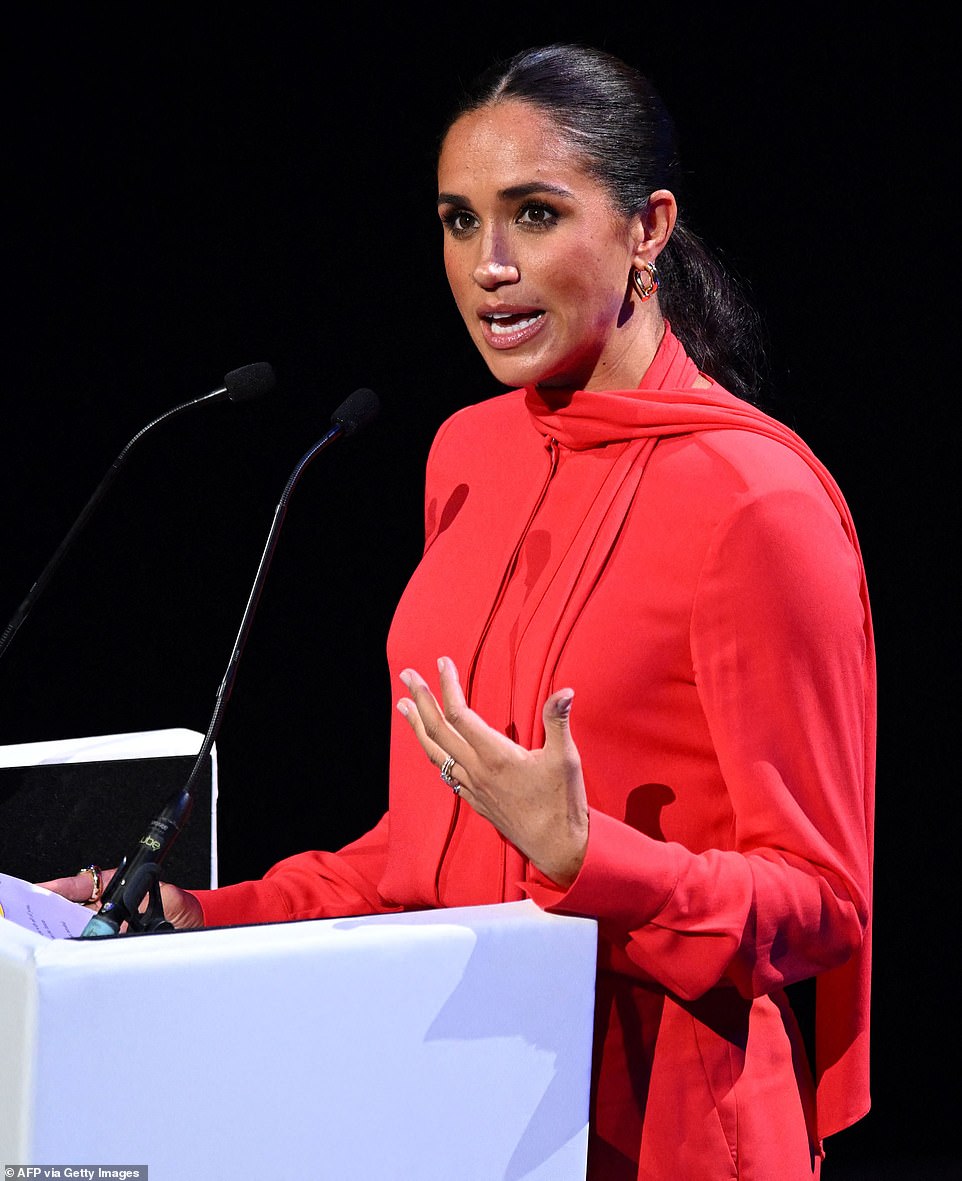 And then it was Meghan’s turn. Poised, smiling, she took to the podium to tell the audience all about… Meghan

Why, she even saved her little paper place-card that had her name on it, such was her disbelief. She was so nervous, doubted herself so much. Was she even good enough to be there (shy giggle, conspiratorial smile)?

As for gender equality, she didn’t mention it once. But no matter. She was grateful, she was humble, her pantsuit was awesome. It ended with a short fanfare, followed by Harry hastily ushering her toward the exit, pausing briefly for a few selfies.

The audience, of course, loved her. And she was undoubtedly impressive: Beautifully turned out, wonderfully poised. But it’s hard to come across as genuinely self-deprecating, genuinely modest – when all you’re really doing is talking about yourself. Again.