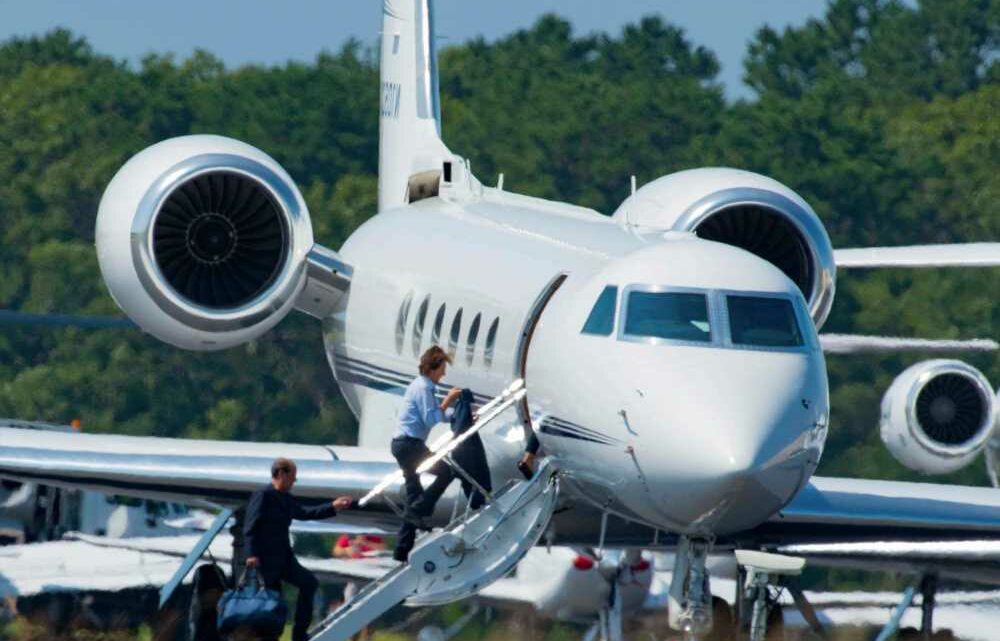 Robert Kraft massaged a deal for a $43M Hamptons home

Beyoncé, Jay-Z, Jon Bon Jovi and other jetsetters who take flight to reach the Hamptons could soon be grounded as the fate of the East Hampton Airport is up in the air.

The East Hampton Town Board is deciding whether to shutter the airport, a perk for the 1 percenters who use jets, seaplanes and choppers to beat summer traffic — and a nuisance to residents who abhor the noise and pollution it creates.

“This is not the haves versus the have nots. It’s the have everythings versus the have-a-lots,” said Barry Raebeck, a former high school English teacher who lives 1.5 miles from the airport and is a leader of Say No to KHTO, a group that wants to close the airport. The acronym refers to the airport’s navigation code.

The turning point for opponents may have finally come. The town’s agreement with the FAA, which required it to keep the airport open in exchange for receiving grant money — funds it last accepted in 2001 — comes to an end in September.

The town’s options include a complete closure and then possibly transforming the 600-acre property into a park, or a temporary shutdown which would allow it to reopen as a “new” airport with greater restrictions, according to a report.

Shuttering the airport could have repercussions all the way back to the East River, where the noise from helicopter and seaplane departures from companies like Blade to points east — a trip that can take just 35 minutes — have also roiled residents.

In East Hampton, Raebeck called the airport a “pollution engine” that grew from a small landing strip for hobbyist pilots to a destination for the rich and famous. Some come in so low over his house, he says it feels like an invasion of privacy.

“My daughter doesn’t like to take outdoor showers in the summer. That’s how low they are,” Raebeck said.

Patricia Currie, who also leads the anti-airport group, said past noise abatement attempts have been a failure.

“The people who are flying these planes — and flying in these planes — are just untroubled by what they leave in their wake from their journeys. They just couldn’t care less,” Currie said. “So we feel the same way about them.”

A study commissioned by the town and released earlier this month found that in 2019, about 24,000 passengers arrived by air, with some 10,000 heading to Southampton.

Those who stayed in East Hampton spent an estimated $500 to $1,300 per trip, or a upward of $20 million in total. The report noted that the spending generated just 1 to 3 percent of the town’s taxable sales.

The East Hampton Community Alliance, which supports keeping the airport open, did its own study that found a greater economic impact to the region with airport passengers spending a total of $78 million in 2019 and about 800 jobs tied to its operation.

Meanwhile, the airport generated 47,000 noise complaints from the end of June through September 2019, with helicopters the leading source of the gripes.

Gianpaolo de Felice, a former professional pilot who owns local restaurants and is the son-in-law of fashion designer Donna Karan, is a founder of the alliance. It has crafted a pilot’s pledge to “fly neighborly” including observing a voluntary airport curfew between 9 p.m. and 7 a.m.

Melissa Tomkiel, the president of Blade — which charges up to $798 for a one-way ticket to East Hampton — said it was focused on transitioning to electric aircraft, which would be silent, and called it “shortsighted” for the town to “take drastic measures.”

Tomkiel said closing East Hampton Airport would not resolve complaints about air traffic because there was still nearby Gabreski Airport in Westhampton Beach and Montauk Airport.

“It’s like squeezing the balloon, the volume’s going to go elsewhere,” Tomkiel said. “It’s not going to eliminate the problem.”