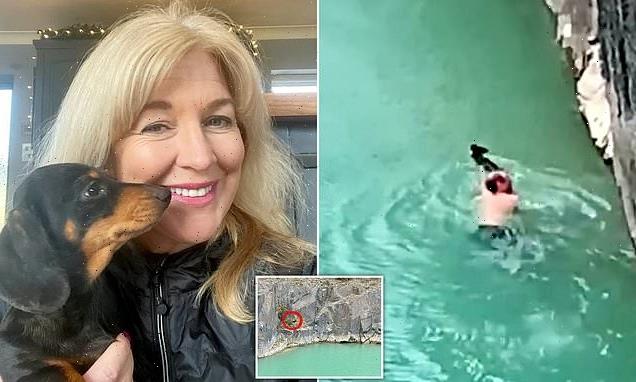 A retired policeman swam through a flooded quarry in order to rescue a two-year-old dachshund who had been missing for 26 hours.

Juan Kinley, 57,  a former DCI, heroically came to the rescue of Bebe, a two-year-old pooch, after she was found on a ledge at the bottom of the quarry on the Isle of Man on January 3.

Footage shows Juan make his way across the freezing water before grabbing hold of the canine as she sits on the ledge.

He then holds the canine and keeps her head above the water as he swims back. 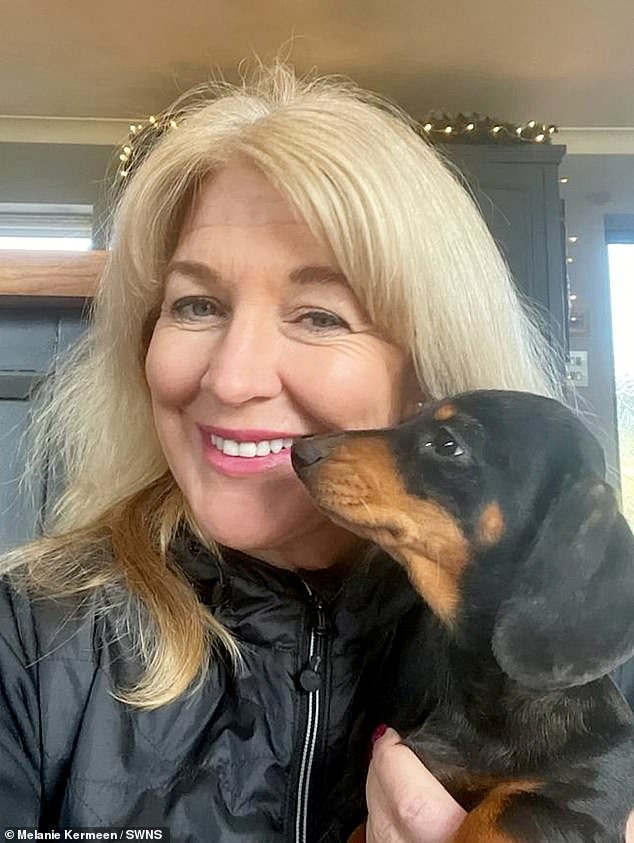 The dog’s owner Melanie Kermeen (pictured with Bebe), 51, thanked Juan and the local community for their help 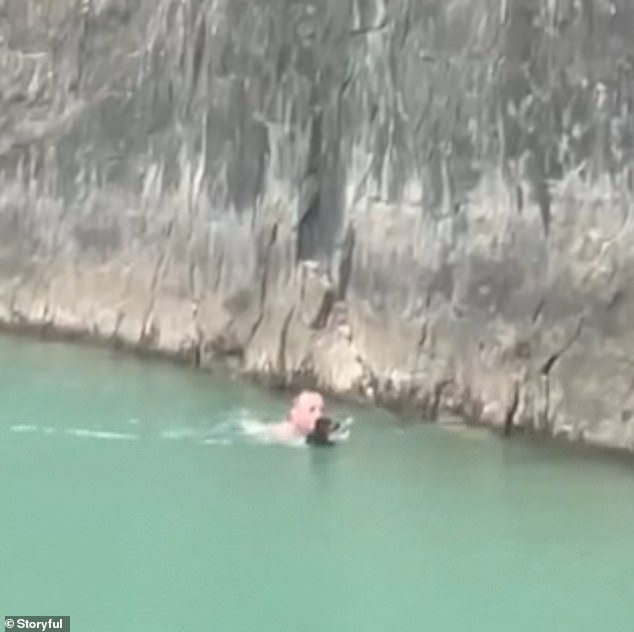 Retired policeman Juan Kinley, 57, holds onto two-year-old Bebe as he swims across the flooded quarry on the Isle of Man on January 3 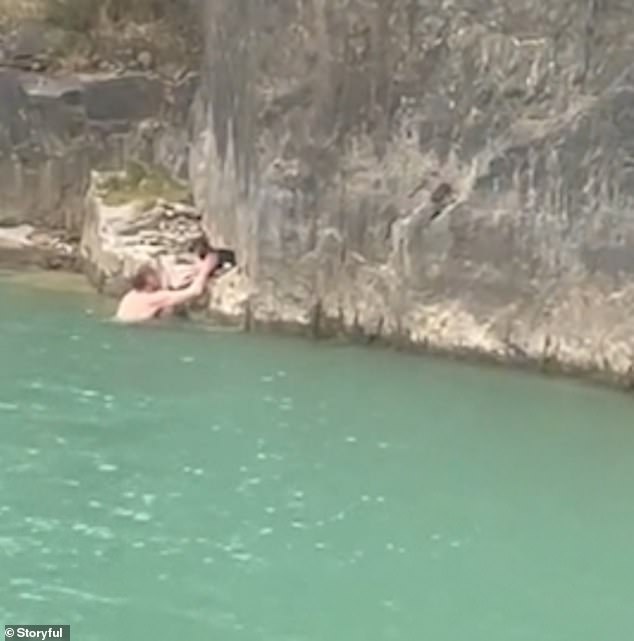 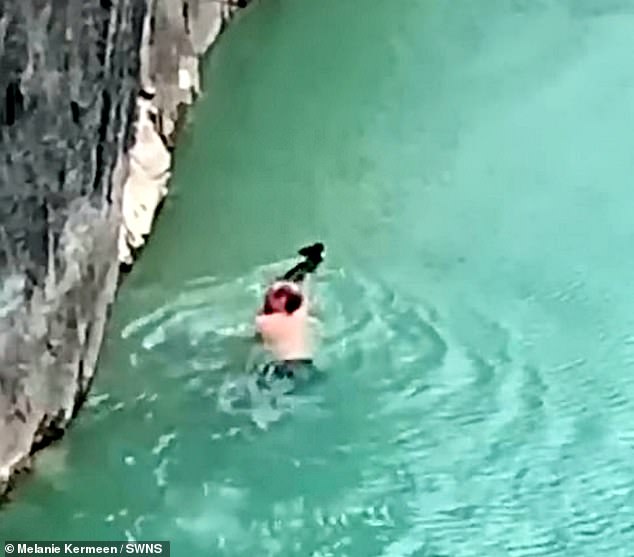 The dog’s owner Melanie Kermeen, 51, said she had been out with her two dogs – Bebe and six-month-old Lulu – when they became separated from her on January 2.

Lulu managed to make her way back home, but Bebe was only found when her owner heard her frightened yelps from the bottom of the pit, after surviving a 30ft fall.

While waiting for the emergency services, Juan decided to take matters into his own hands by jumping into the freezing cold water and rescuing the terrified dog.

Melanie said: ‘There have been tragic stories where dogs get lost, so it was just a harrowing 26 hours.

‘But the way it ended was quite spectacular, and her fall down off the ledge was quite miraculous.

‘We’re just really, really lucky that we had someone like Juan with us, with his capabilities, because she was looking like she was going to jump in the more distressed she was getting.’ 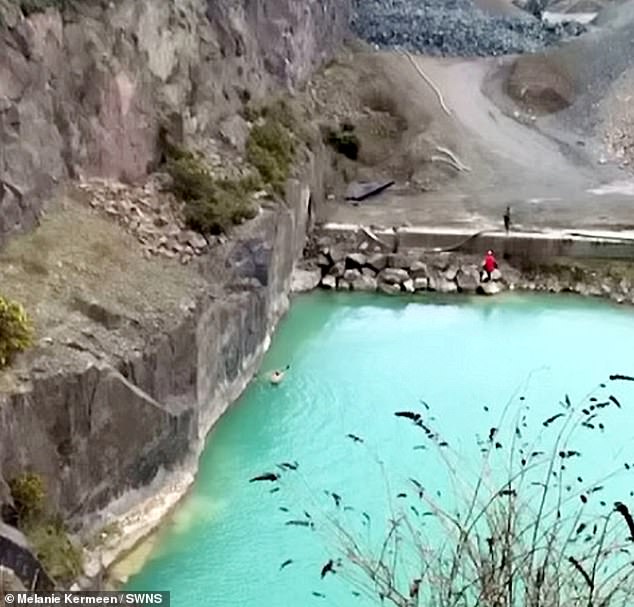 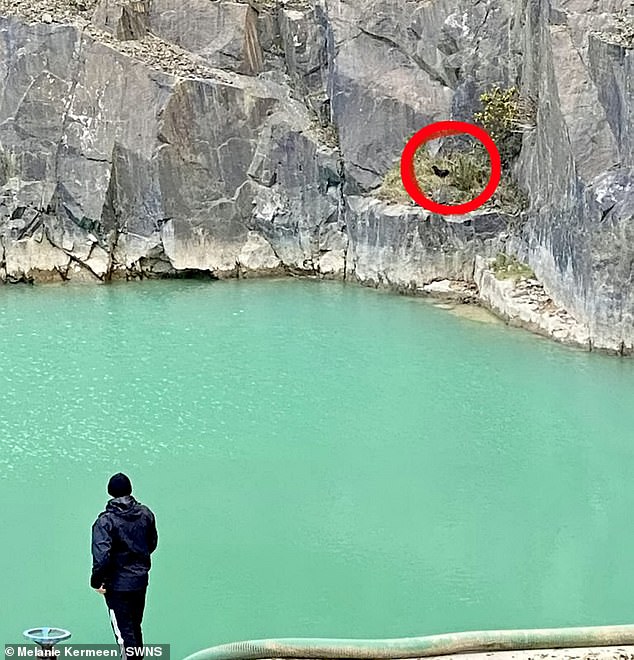 Fundraising director Melanie said the search for the hounds began last Sunday morning, when they went missing from her rural home in St. John’s, on the West Coast of the Isle of Man.

The adventurous duo would often run off to chase rabbits in the fields surrounding her smallholding, but when they didn’t return for several hours, she began to panic.

Following frantic social media appeals and a local search that went on late into the night, exhausted Lulu arrived back at her door in the early hours of the next morning.

Melanie said ‘small footprints’ eventually led rescuers to the location of her lost dog and when the search party ventured close to a local quarry on January 3, they heard Bebe’s tiny bark.

Melanie said: ‘I was shouting to her, and I actually heard her yelp, so I knew she was alive, which by then was 26 hours from her being away.

‘She must have fallen 30ft down onto this ledge, just 4-5ft above the water.

‘This water is very deep – 3.5 metres deep. She was amazingly lucky to have fallen down there.’ 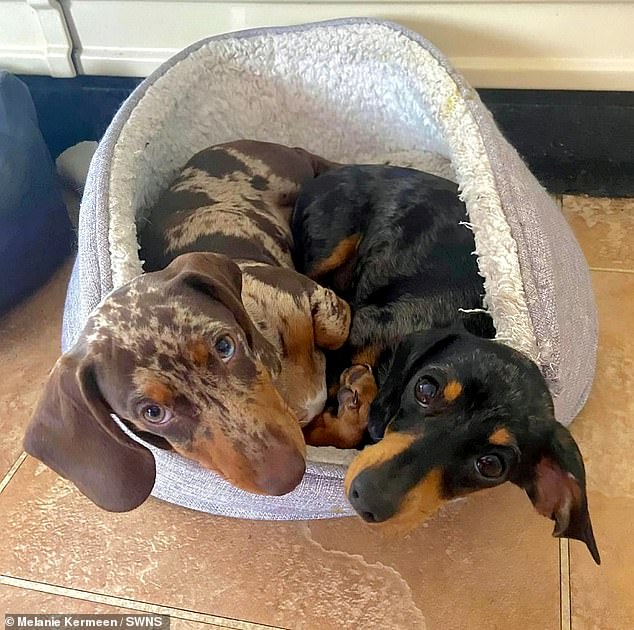 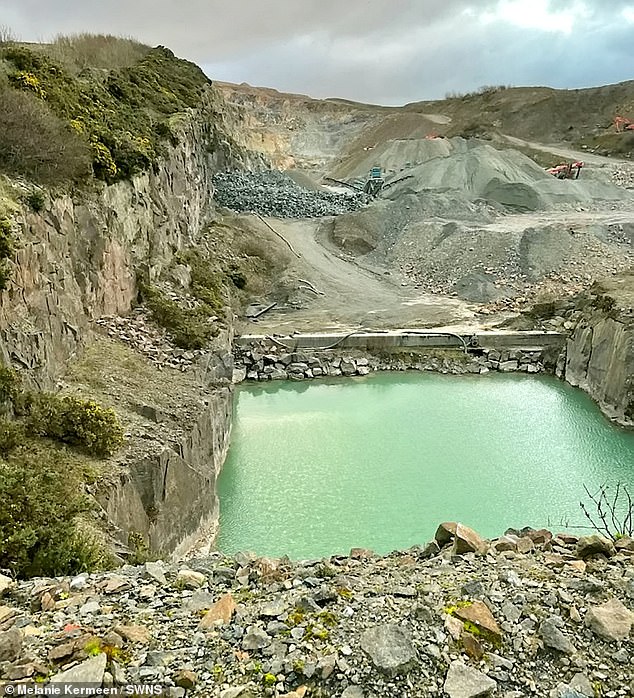 Melanie said the search for the hounds began last Sunday morning, when they went missing from her rural home in St. John’s 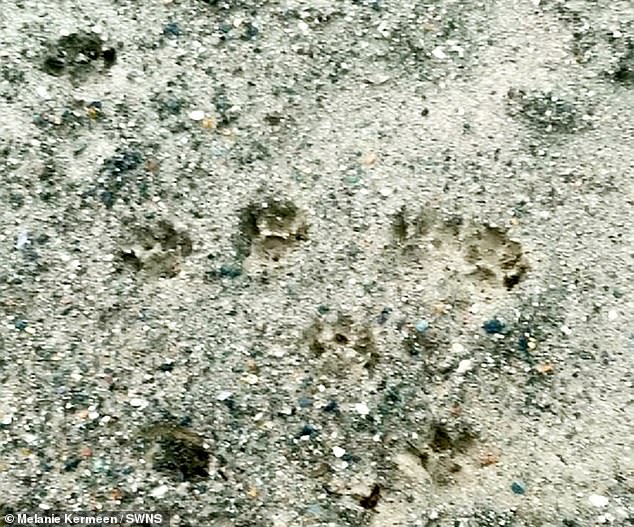 Melanie called the emergency services for help and was waiting for a fire safety officer to arrive.

But with Bebe becoming ever more distressed, five-time Iron Man veteran Juan decided to embark on the daring rescue mission himself by swimming over to save her.

Melanie said: ‘He just jumped off and launched in, but he’s quite used to open water swimming.

‘He’s the chair of the triathlon club over here and organises lots of those type of things, and he’s done five ”Iron Mans”, so he’s fairly tough.

‘He swam about 30 metres to Bebe and checked if she was alright. She was delighted to see him.

‘She didn’t seem to be hurt, so he picked her up and made the swim back, which was pretty tough as by that time it was pretty cold.

‘She was trying to help with her little doggy paddle, which was just scratching his face and eyes and chest.’

Now back home safe and sound, Melanie thanked the local community for their help and said she would not be letting the two mischievous pooches off their leads again.

She also took to social media to share a picture of her canines curled up beside each other next to the caption: ‘Bebe and Lulu are now fast asleep in their bed in the warm kitchen.’

She said: ‘We’re just so thankful to the island community, it’s just amazing.

‘I guess it’s that animal-loving instinct that the British people have with dogs and animals – just an amazing response from people.

‘It’s a real comfort and real help, and really heartening. It was 26 long hours, but a really good, happy outcome.’

She added: ‘We’ve got two big extender leads now, so they won’t be getting off!’