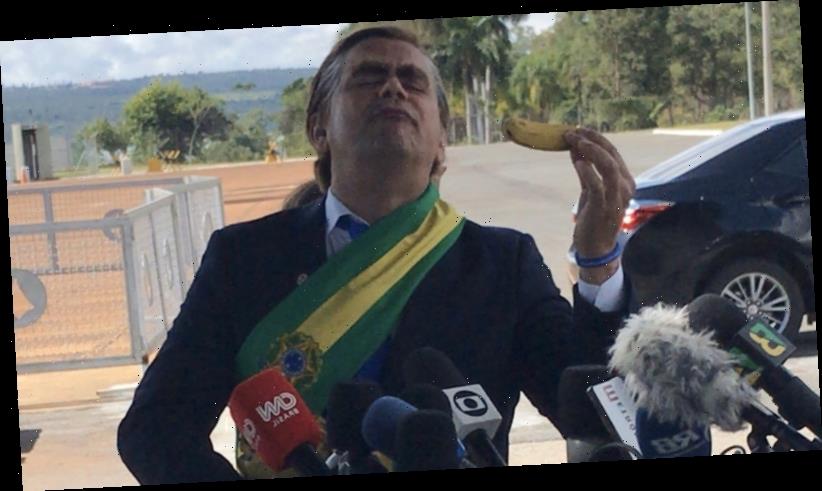 Fake Bolsonaro shows up to presser in place of Brazilian President

Rio de Janeiro: Brazil's Jair Bolsonaro sent out a trumpet-playing, banana-throwing impersonator to his daily press doorstop in Brasilia on Wednesday, before joining him for a stand-up routine in one of the most surreal moments of his unorthodox presidency.

Journalists were expecting the far-right former army captain, who has vowed to kickstart Brazil's economy and end years of crime and corruption, to answer questions about new figures showing the country's GDP to be the worst in three years, when the impersonator appeared. The bizarre scene, was broadcast live on Bolsonaro Facebook page. 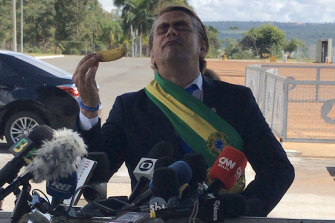 Comedian Marvio Lucio stands in front of members of the media while dressed as Brazilian President Jair Bolsonaro in Brasilia on Wednesday. Journalists were expecting Bolsonaro to answer questions about the country’s GDP, the worst in last the years.Credit:Bloomberg

The impersonator, donning a sash with the yellow and green of Brazil often worn by the President and mimicking his trademark drawl, was named by local media as comedian Marvio Lucio dos Santos Lourenco. Reuters was unable to confirm his identity.

As the fake Bolsonaro greeted journalists and supporters gathered outside the President's residence, he struck up a tune on a trumpet and gave bananas to the crowd, offering some to the waiting media, an apparent reference to an obscene hand gesture known locally as "giving a banana" that Bolsonaro has used in recent weeks to dismiss journalists. It is equivalent of giving someone the finger. Bolsonaro's son, MP Eduardo Bolsonaro, has also been using the gesture in reference to media.

When the real President arrived, journalists attempted to ask about the data released by statistics agency IBGE on Wednesday showing the economy grew at 0.5 per cent in the fourth quarter. It points to a weak recovery from the 2015-16 recession this year.

The economy grew at 1.1 per cent last year and was already off to a soft start to 2020, well before the coronavirus outbreak that has suddenly cast a huge shadow over the world economy.

The economic outlook is likely to pile pressure on Bolsonaro and his powerful Economy Minister Paulo Guedes as private sector economists slash their 2020 growth forecasts to below 2 per cent.

The President seemed to direct the economy question to the impersonator who in turn responded by repeatedly saying Guedes' name and nickname. Guedes is a Chicago-trained economist who has pledged to steady the economy and lower unemployment. He remains bullish.

"What did I say at the beginning of the government? First year we are going to grow 1 per cent. It came out 1.1 per cent, so it is on track. Second year, after reforms, we will grow above 2 per cent," he told reporters separately in Brasilia.

Bolsonaro proceeded to pat Lourenco on the back before taking selfies with supporters and sign autographs along the barrier. The two then shook hands and parted ways.

It was one of the stranger moments of Bolsonaro's time in office. BBC World reported while supporters laughed, members of the media felt it was "incredibly disrespectful".

With his folksy, avuncular style and willingness to circumvent traditional media in favour of direct communication with his supporters via social media, some have even labelled Bolsonaro the “Trump of the Tropics”.