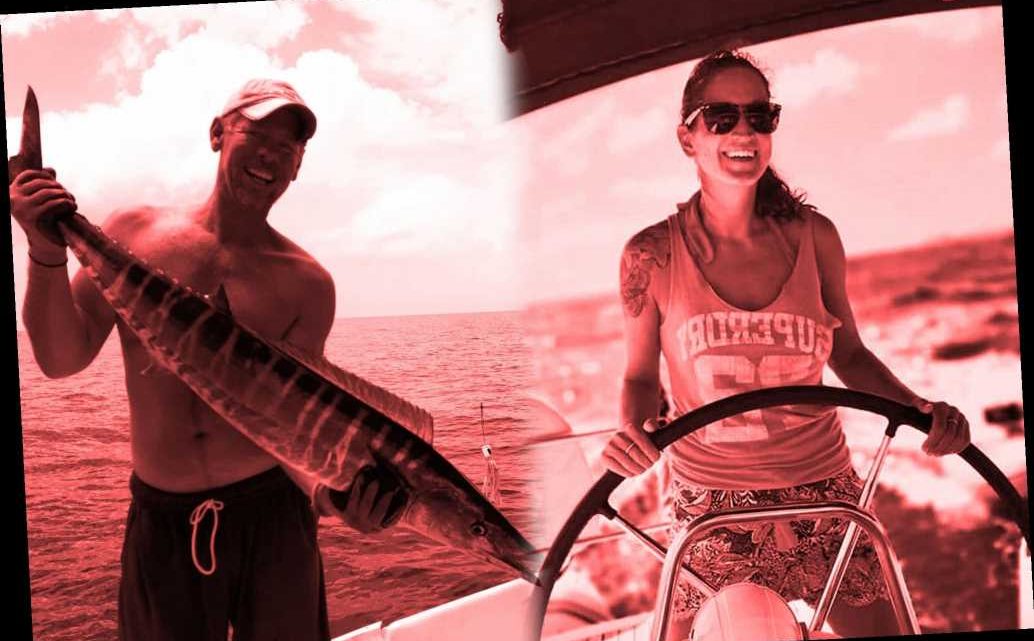 Boyfriend of missing woman was reportedly jailed for beating ex-wife

Woman goes missing from catamaran moored off US Virgin Islands

Before she vanished without a trace earlier this month from a serene bay off St. John in the US Virgin Islands, Sarm Heslop was happily working to improve her culinary skills.

Along with images of azure waters and beach sunsets, Heslop’s Instagram account features photos of garlic, chili and soy fried shrimp on a bed of coconut rice and baby spinach; an artful display of banana and peanut butter muffins wreathed in fresh strawberries and mango chunks, and ham-wrapped eggs garnished with slices of avocado.

It was among the last photos the suntanned brunette with the colorful shoulder tattoo of a seahorse, bird and flower would post before she disappeared from her new boyfriend’s charter yacht where she’d been working as a cook since January.

Three weeks after she was last seen on March 7, Heslop’s mysterious disappearance has sparked an island-wide manhunt that now includes the FBI. It has also revealed a dark side of Ryan Bane, the handsome sailor she met on Tinder last year. Bane, 44, went to jail for beating up his ex-wife, who recently confessed that she slept with a shotgun under her pillow during the final months of their marriage.

And now, Bane has disappeared. A source told The Post that he sailed away from St. John on Thursday. FBI agents scrambled to find him and chartered a boat for the search.

Sarm Joan Lillian Heslop is a former flight attendant from Southampton, England, with a restless sense of adventure. By the time she ended up in the Virgin Islands at the end of 2019, she had already traveled the world. And, over the last few years, she had discovered a passion for sailing, friends told The Post.

Nearly two years ago, Heslop sailed the Atlantic on a whim with two friends from La Linea de la Concepcion, a city in southern Spain near Gibraltar where she had been living on a boat.

They landed in the US Virgin Islands in late 2019, and Heslop instantly fell in love with the Caribbean, a friend told The Post. Then last fall, Heslop, whose Instagram handle is “sarmaluvin,’” fell in love with Bane, a self-described entrepreneur who left a successful business in Michigan to work as a charter boat captain in St. Thomas, according to his Siren Song charter company’s website.

Like Heslop, Bane, who calls himself Captain Ryan, has a sense of adventure and loves the outdoors. A passionate life-long sailor, the sun-bleached blonde lists his hobbies as deep sea diving, surfing, “dancing in flip flops and just having a blast.” Bane, who grew up in the Detroit suburbs and started sailing on Lake Michigan when he was 10, studied at Michigan State University. While still a student there, he took his first trip to the Virgin Islands for a natural science study-abroad program in 2000. “He knew he found the perfect paradise,” according to a bio on his website.

After completing an MBA at Central Michigan University, Bane became an automotive parts salesman, working for Fortune 500 companies, his website says. But after growing disenchanted with Michigan winters, he sold his home and returned full time to the Caribbean where he worked on acquiring a deep-sea diving masters certificate and started his charter boat company. Bane is also a seaplane pilot, according to public records.

Friends on the island say Bane first met Heslop in the fall of 2020 in Grenada, where Bane had gone to ride out hurricane season.

By that time, Heslop had quickly adapted to hopping from island to island in the Caribbean, posting selfies from Mustique, Antigua and St. Lucia. “Goodbye to St. Lucia. It was a great week #sarmaluvin meeting new people,” she wrote on February 25, 2020, next to photos of the island and sharing a beer with two friends at an outdoor restaurant. About a week later, she posted pictures of herself snorkeling in a bikini and holding hands with an islander in long shorts and plastic sandals who is staring deeply into her eyes. “Snorkelling and a declaration of love all in one day #sarmaluvin the Caribbean,” she wrote on March 4, 2020.

After a brief trip to Malta to visit friends last year, Heslop returned to the Virgin Islands in January, moving onto Bane’s 47-foot catamaran where she cooked for the tourists who spend up to $2,000 a day for tours around the Caribbean.

“Becoming the chef on the boat was a way for her and Ryan to be together,” said Zan Lawther, a friend of Heslop’s, in an email to The Post. “All reports from Sarm and the few that met him were that they were very happy.”

Heslop’s more recent social-media posts feature photos of her posing on the boat in twilight, and lying on a hammock with a flower in her hair. There are also photos of Bane’s Labrador retriever, Hunter, at the beach, but no photos of Bane.

Although outwardly funloving and carefree, Bane has been described as having an almost split personality by his former wife. In 2011, he pleaded guilty to domestic violence and spent three weeks in a Michigan jail, according to a police report.

Bane’s ex-wife Cori Stevenson claimed that Bane dragged her out of their car when they arrived at their Orion Township home near Detroit on Nov. 27, 2011, after attending a wedding. Once inside, Bane “grabbed her in the dining room, threw her to the ground, and smashed her head into the floor, chipping one of her teeth,” according to the report.

Bane told police that Stevenson, whom he married in 2008, had attacked him first. But police found Stevenson with a chipped tooth “that appeared to be fresh. Her right ear lobe was bloody and scratched. Her right shoulder and the right side of her neck showed red scratches. Her right eyelid was scratched and red.”

“He was a total Jekyll and Hyde character,” said Stevenson in an interview with The Sun from her home in Melbourne, Fla., last week. “He would have a good week, and then all of a sudden he changed. There was never a day when I didn’t fear him. I slept with a shotgun the whole time I went through my divorce.”

Stevenson reportedly has spoken with Virgin Islands authorities about Bane’s past and has provided them with court documents related to their marriage and divorce.

Heslop vanished after a night of drinking with Bane at 420 the Center, a popular dive bar in Cruz Bay. According to Bane, the couple returned to his boat, which was anchored about 100 feet from the shore on nearby Frank Bay, on an inflatable dinghy and went to bed just after 10 pm. Bane told authorities that he noticed Heslop was missing at 2 am when he was woken by the boat’s anchor alarm, which sounds if the boat drifts too far from where it’s anchored. The weather was calm although the current near the bay was rough, according to locals. At 2:30 am, he reported her disappearance to local police, who told him to call the US Coast Guard. Bane did not make that call until several hours later. The dinghy was still on Bane’s boat, according to a local sailor whose own boat was anchored close by.

The mystery deepened when Bane reportedly refused to allow authorities to search the boat the next day.

“If she left the boat at night, she didn’t take the dinghy, but had to swim to shore,” said Rick Smith, who runs Cimarron Yacht Charter in St. John. “It’s only 100 feet but the current is really strong and very dangerous in that area. The whole thing is pretty perplexing.”

Heslop’s friends and family in England are also baffled and deeply worried. They have started the “findsarm” website, posting daily articles and photos and urging anyone with information to contact authorities.

“We have heard that Sarm’s phone, passport and all belongings were left on the boat, where she was living with Mr. Bane,” said Andrew Baldwin, a friend from England. “She would not just disappear, leaving no trace. She is savvy and sensible. It’s not like her at all. It just doesn’t add up.”

Bane’s catamaran remained anchored off the coast of St. John until a few days ago, according to Smith. He said that a Coast Guard helicopter appeared on the scene the day after Heslop was reported missing. But he told The Post that he did not see Coast Guard divers or boats searching the waters.

Bane handed over Heslop’s phone and other possessions to police, according to Cattie, who claimed to the Detroit News that Bane is actively cooperating with authorities to find Heslop.

But on Thursday, the Siren Song disappeared from Frank Bay where it had been anchored for weeks after Heslop’s disappearance. “He could have gone anywhere — to a Dutch, French, or even British island where there is no extradition,” said Smith. The British Virgin Islands is only five miles away from St. John, he said.

The FBI would not comment on the case, other than to say its division headquartered in San Juan, Puerto Rico, was assisting the U.S. Virgin Island Police Department.

If Heslop somehow managed to swim to shore at night, locals worry that “something could have happened” on the island. Although St. John, pop. 4,170, is considered relatively safe, the US Virgin Islands has one of the highest crime rates in the Caribbean. Last year, there were 49 homicides in the archipelago, which has a population of 106,000.

“Certainly something could have happened to her wandering around alone at night,” said Smith, who has lived in the Virgin Islands for 12 years. “Wherever she is, she’s long gone.”

As daily deaths near 4,000, worst may lie ahead for Brazil