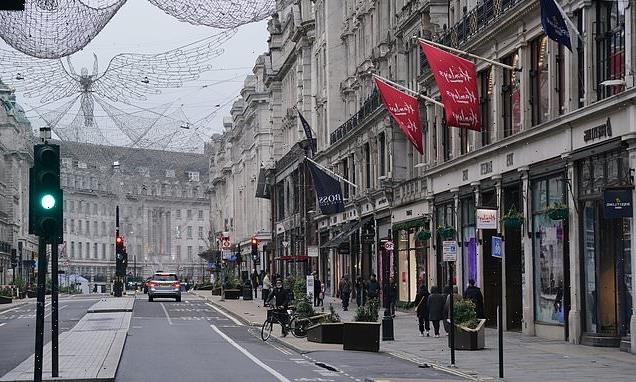 Fears Britain could be crippled by millions forced into isolation

Britain could be crippled by millions of people being forced into self-isolation, with Covid-19 infections higher than ever amid the Omircon wave.

Around 1 in 10 people in London were likely infected with COVID-19 on Sunday, new official estimates said, underlining the relentless advance of the variant.

Many industries and transport networks are struggling with staff shortages as sick workers self-isolate, while hospitals in Britain have warned of the risk of an impact on patient safety.

Daily modelled estimates produced by the Office for National Statistics showed around 9.5 percent of Londoners had COVID-19 as of Sunday, within a 95 percent confidence interval of 8.43 percent to 10.69 percent.

Meanwhile, hospitalisations in London were dangerously close to the Government’s threshold of 400 for more national restrictions, reaching 386 on December 22. 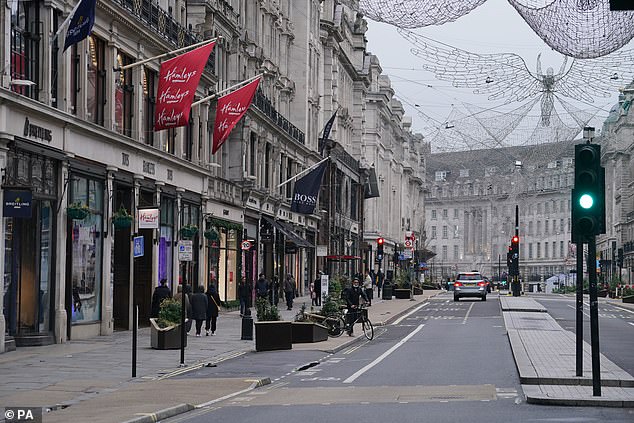 Regent Street in central London as it lies empty on Christmas Day. Around 1 in 10 people in London were likely infected with COVID-19 on Sunday, according to new official estimates that underlined the relentless advance of the Omicron variant of coronavirus 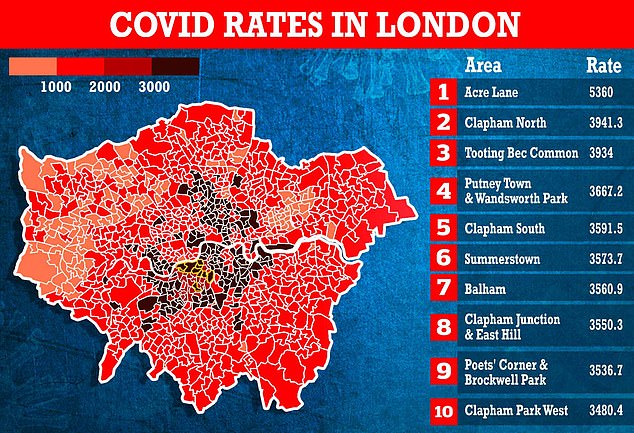 London is being battered hardest by the new variant, with as many as one in 10 infected with the virus and ten of the worst hit postcodes in England located within a three square mile stretch between Wandsworth and Lambeth (highlighted in yellow above) 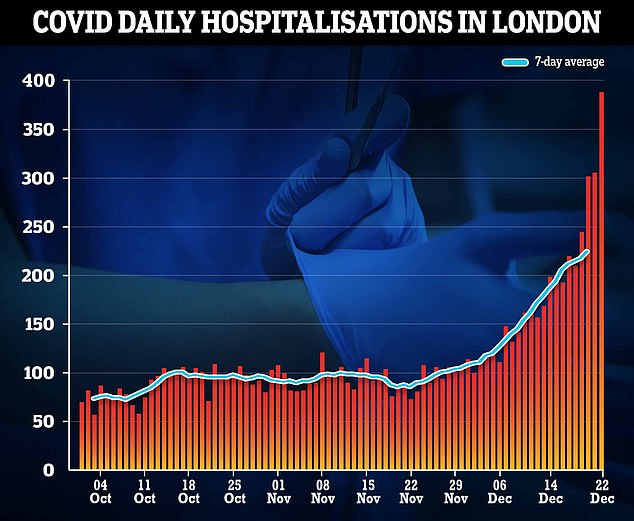 Reports have claimed ministers are watching hospitalisation numbers in the capital, with a two-week ‘circuit breaker’ lockdown set to be imposed if daily numbers surpass 400

The figures came a day after Britain recorded a record number of new coronavirus cases as the Omicron variant swept across the country, with the daily tally reaching 119,789 from 106,122 a day earlier.

The ONS report also showed a record 1 in 35 people in England had COVID-19 between December 13 and December 19 – compared with a previous estimate published on Thursday of 1 in 45 in the week to December 16.

Omicron’s rapid advance has driven a surge in cases in Britain over the last seven days, with the total rising by 678,165, government data showed on Thursday.

Meanwhile, shopper numbers in central London on Christmas Eve were 30.3 percent lower than the previous Friday as Omicron variant kept many people from the high streets, according to data from Springboard.

City centres outside London saw a 10 percent drop in shoppers in the hours up to midday versus a week earlier, the data showed.

Footfall across all destinations rose 13.9 percent on a week ago, but was 21 percent lower than on Christmas Eve 2019, Springboard said.

As Prime Minister Boris Johnson struggles to limit the economic impact of the latest COVID-19 outbreak, it said on Wednesday it was reducing the legal self-isolation period in England to seven days from 10.

On Christmas Eve, SAGE warned that the UK is about to be hit by a large wave of Covid hospitalisations and said the peak could be even higher than last winter despite the reduced severity of Omicron.

In minutes from a meeting on December 23 published last night, the Government’s Scientific Advisory Group for Emergencies warned that the peak on hospital admissions ‘may be comparable to or higher than previous peaks’ – including the second wave in January.

MPs and hospitality bosses have warned not to bring in new restrictions before New Year’s Eve or risk ‘devastating’ businesses.

The new data comes after millions of families had their festive plans disrupted after more than 3,000 flights were cancelled worldwide on Christmas Eve.

Britain has been besieged by travel woes in the run-up to Christmas, with rail strikes and line problems cancelling hundreds of trains in the last week.

And yesterday, several airline companies said they had been forced to cancel over 1,500 flights because they were unable to staff them due to the rapidly-spreading Omicron variant.

According to the flight tracking website FlightAware, 2,348 flights were grounded on Christmas Eve, while a further 1,556 have already been cancelled ahead of tomorrow.

The most impacted airlines today were China Eastern with 477 cancellations, United with 189 and Air China with a further 188.

United said the nationwide spike in Omicron cases has had a ‘direct impact’ on its staffing levels, forcing the airline to cancel flights. 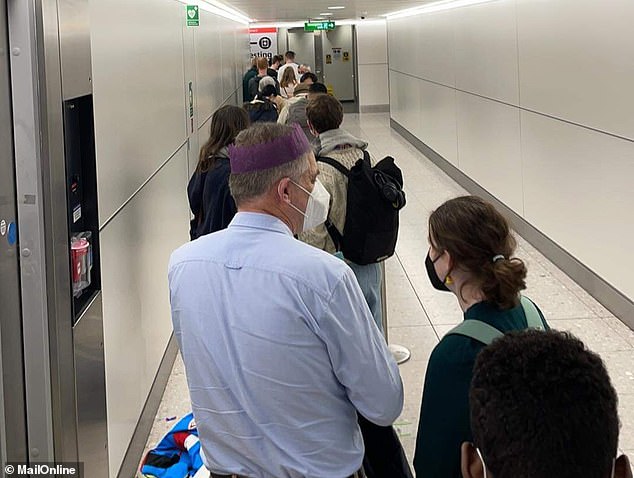 The huge travel hold-up is believed to have been caused by staff closing one of its testing centres, meaning extra pressure on the one open facility

Images from Terminal 2 on Saturday showed endless lines of weary travellers in corridors waiting to pick up their arrival Covid tests.

Some irate passengers were reported to have been waiting up to four hours.

The huge hold-up was believed to have been caused by staff closing one of its testing centres, meaning extra pressure on the one open facility.

‘They appear to have booked in people in two test centres, and then closed one of them – so the queues are insane.

‘I’ve been here for 45 minutes, but been told by a staff member that the wait has been four hours for some people today.

‘The queue is barely moving. Staff are working as hard as they can, but someone has clearly f***ed up. Christmas is very much about to be ruined for myself and most others here.’

Tomorrow a ‘Covid-O’ committee of Ministers and officials will discuss the frontline staff shortages as a result of Omicron spreading.

The meeting will include Chancellor Rishi Sunak and Health Secretary Sajid Javid.

The appeals from MPs and business leaders came as new Sage papers and fresh modelling warned that Omicron may yet lead to a higher peak of hospitalisations than last winter’s – despite its lower severity and widespread vaccination. 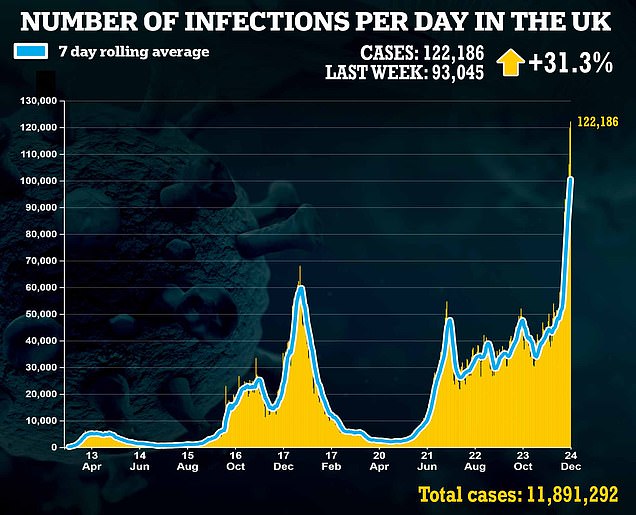 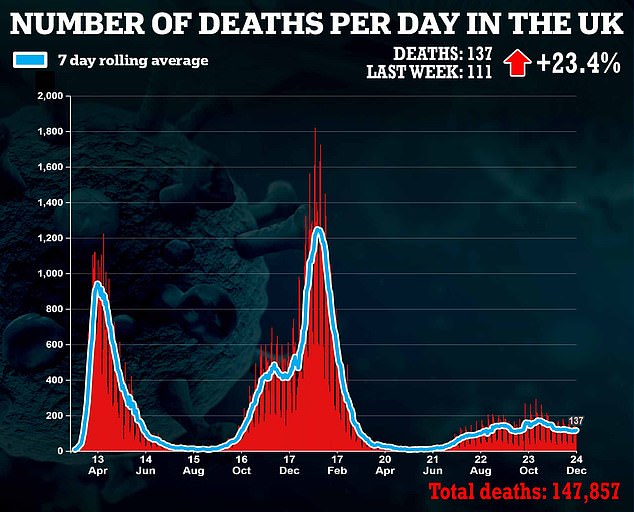 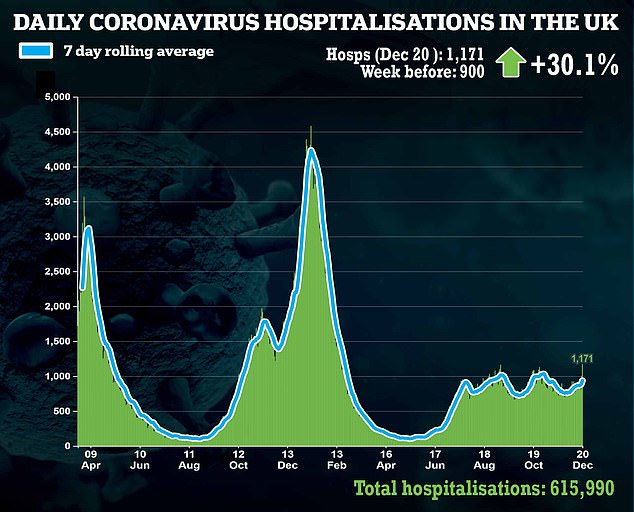 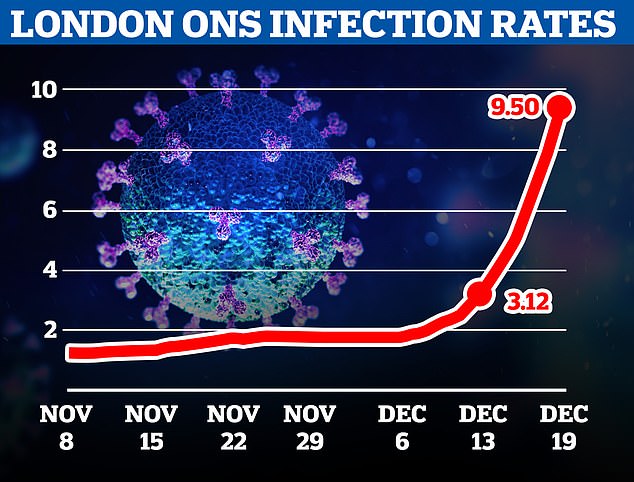 But although three UK studies last week found that Omicron was much less virulent than Delta – between 15 and 70 per cent less likely to lead to hospitalisation – Sage cautioned against optimism.

It warned these figures were largely based on younger people who have formed the bulk of infections so far.

Those who shared news of their positive test results on social media included a woman who was forced to cancel plans to host her family on Christmas Day after her nine-year-old son tested positive in the morning.

One user said her whole family had tested positive for Covid-19, while another woman said she tested negative in the morning and when she tested again in the evening she was positive.

While another Twitter user said he was due to visit his in-laws for the first time since 2019, only for his youngest to test positive two hours before they got together.

‘I literally know so many people who have tested positive on Christmas Day. That’s not very Christmassy’, said another.

But while some people were disappointed, others said they had ‘made the most of it’.

As the wave of infections continues across the UK, ministers are planning to send door-to-door teams armed with Covid jabs to reach the estimated five million people yet to be inoculated.

Government dashboard data shows there were 122,186 positive tests across the country on Friday, which was up about 30 per cent on the week before and more than double the figure a fortnight ago.

The new infections meant nearly 900,000 Britons who tested positive in the last 10 days faced spending Christmas Day in self-isolation — although people who tested positive a week ago in England can be let out early if they come back negative on lateral flows.

Meanwhile separate ONS figures revealed nationally there were 1.69million infections per day in the week up to December 19 — last Sunday — rising 55 per cent compared to the previous week.

The survey — based on swabs of more than 555,000 people — is regarded as the most reliable indicator of Britain’s Covid pandemic because it uses random sampling rather than relying on people coming forward for tests.

Despite there being a record number of infections last week, the ONS’ findings are out of step with gloomy Government modelling that has suggested Omicron was doubling nationally every two days.

Discussions between the Department of Health, NHS England and No 10 over the past week have looked at a nationwide drive to send vaccine teams to areas with low uptake rates as a crucial way to avoid lockdown and other restrictions.

It is also seen as a way to get jabs to rural areas or households where people cannot easily get to a vaccination centre.

This comes as SAGE warned the UK is about to be hit by a large wave of Covid hospitalisations and the peak could be even higher than last winter despite the reduced severity of Omicron.

The rising statistics came as SAGE warned the NHS still faces a wave of Covid hospital admissions on par with or worse than previous peaks.

Mounting evidence — including findings of three key UK studies — has indicated the Omicron variant is up to 70 per cent less likely to cause hospitalisation than Delta.

But SAGE — which has advised Government throughout the pandemic — warns the variant is spreading so fast that it could offset any reduction in severity.

In minutes from a meeting on December 23 published last night, the Government’s Scientific Advisory Group for Emergencies warned that the peak on hospital admissions ‘may be comparable to or higher than previous peaks’ – including the second wave in January.

But MPs and hospitality bosses have warned Boris Johnson not to bring in new restrictions before New Year’s Eve or risk ‘devastating’ businesses.

The vaccination drive continued throughout Christmas Day. NHS England said thousands of first, second and booster jabs were given yesterday.

Meanwhile more than 220,000 first doses of the vaccine were administered in the week to 21 December, up by 46 per cent compared to the previous week.