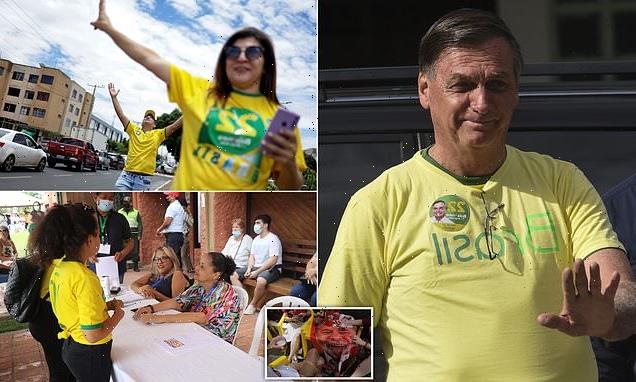 Brazil is on a knife-edge tonight as millions of voters across the country head to the polls, as fears have been raised that the current far-right President may refuse to accept the election the result if he loses and spark armed protests on the streets.

The divisive campaign has left the nation of 215 million people deeply split between supporting the conservative, ex-army captain Bolsonaro and the charismatic ex-metalworker, Lula.

Polls opened at 8am local time and are due to close at 5pm, (around 8pm in the UK), bringing the end to the fierce contest between the pair. The winner will be sworn in as President in January.

Lula, from the Worker’s Party, narrowly beat President Bolsonaro, from the Liberal Party, by five percentage points in the first round four weeks ago, with the final result expected to be close. 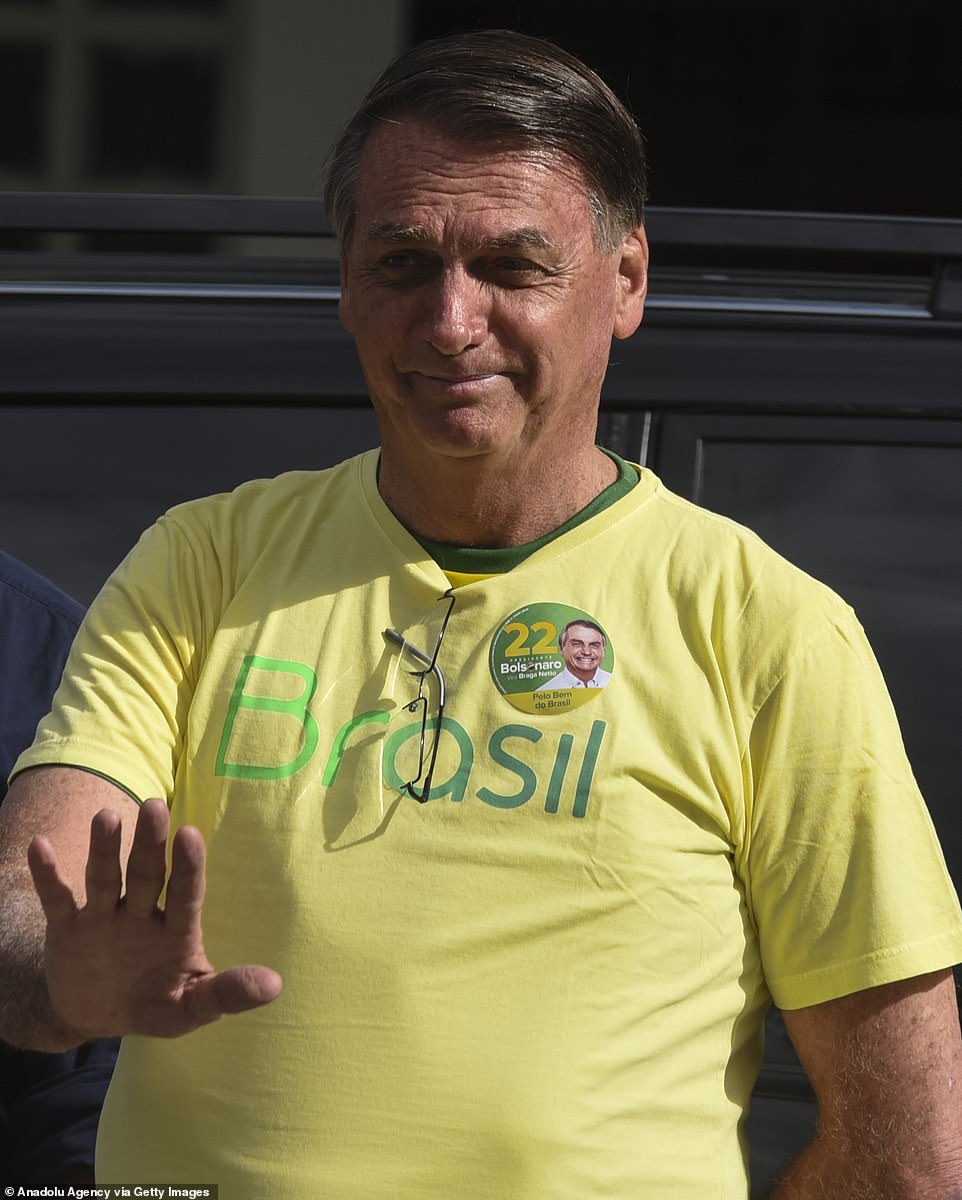 Concerns have now been raised that if Bolsonaro, dubbed ‘Trump of the Tropics’, were to lose, he may refuse to admit defeat.

If he fails to accept the election result, there are fears his armed supporters will take to the streets in protest.

But on Friday night, he pledged to respect the election result, though possible accusations of rigging and backlash from his supporters loom large.

One concerned voter, on her way to a Lula rally in Sao Paolo, said she was concerned that Bolsonaro would ignore the electorate’s decision.

Marcia dos Santos, 27, said: ‘He is a dictator by nature, he and his family have attacked our state structures. 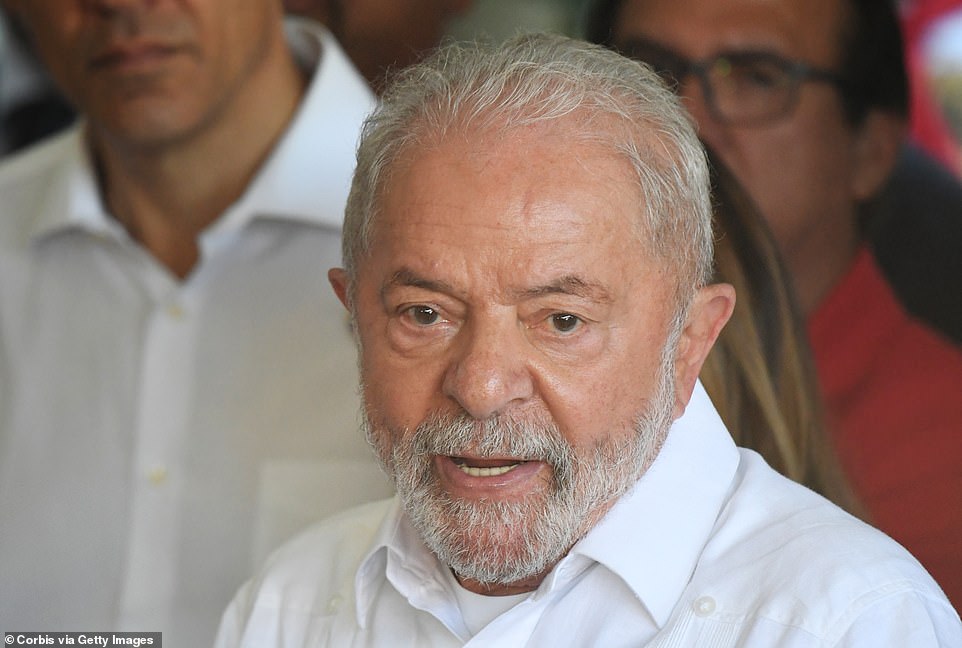 Former President of Brazil, and candidate for the 2022 election Luiz Inacio Lula Da Silva speaking at a press conference shortly after casting his vote his morning in Sao Bernardo do Campo, near Sao Paulo, Brazil

‘Everyone is worried. My mother does not want me to be out on the streets after the result. But we have got to come out, we need to come out to defend the vote.’

Her friend, 33-year-old teacher Antonia Luiz added: ‘We have had disaster after disaster with Bolsonaro. This is a chance to start putting the country right with Lula. He is a good man.’

The President previously came under fire for his disastrous handling of the Covid-19 pandemic, which left more than 680,000 dead in Brazil, as well as his vitriolic style and disdain for political correctness.

However, in recent months, falling unemployment figures, slowing inflation and a recovering economy have given him a boost. 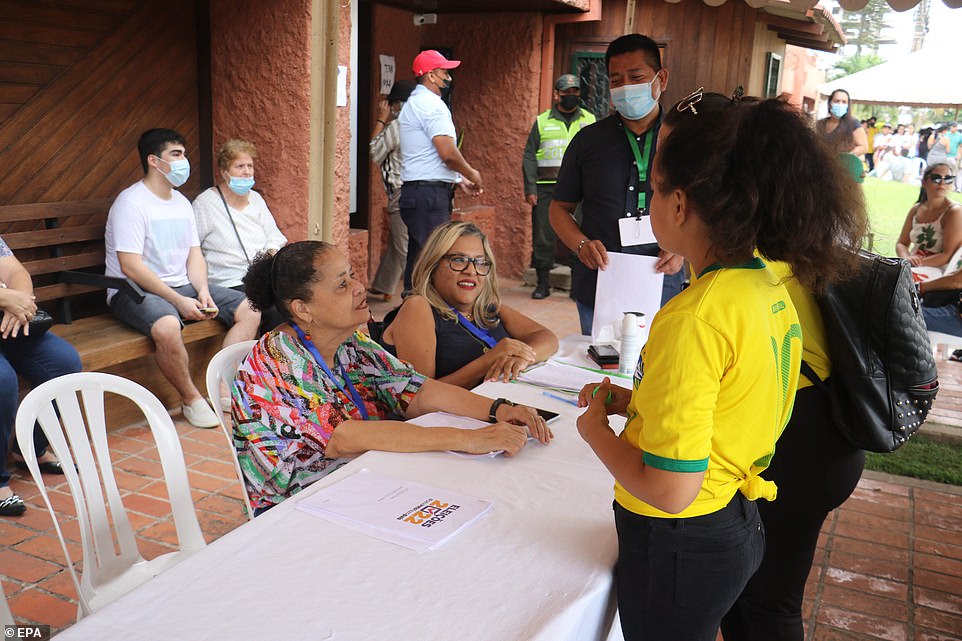 Concerns have now been raised that if Bolsonaro, dubbed ‘Trump of the Tropics’, was to lose, he could refuse to admit defeat. If he refuses to accept the election result, there are fears his armed supporters will take to the streets in protest. Pictured: Brazilian’s heading to the polling station this afternoon

Mr Trump, who continues to falsely insist he beat President Joe Biden in the 2020 election, referred to the left-wing candidate as ‘a radical left lunatic who will quickly destroy your country’.

He had previously referred to the current Brazilian President as a ‘great friend’.

Mr Trump said: ‘Jair Bolsonaro and I have become great friends over the past few years for the people of the United States.

‘He is a wonderful man and has my complete and total endorsement.’ 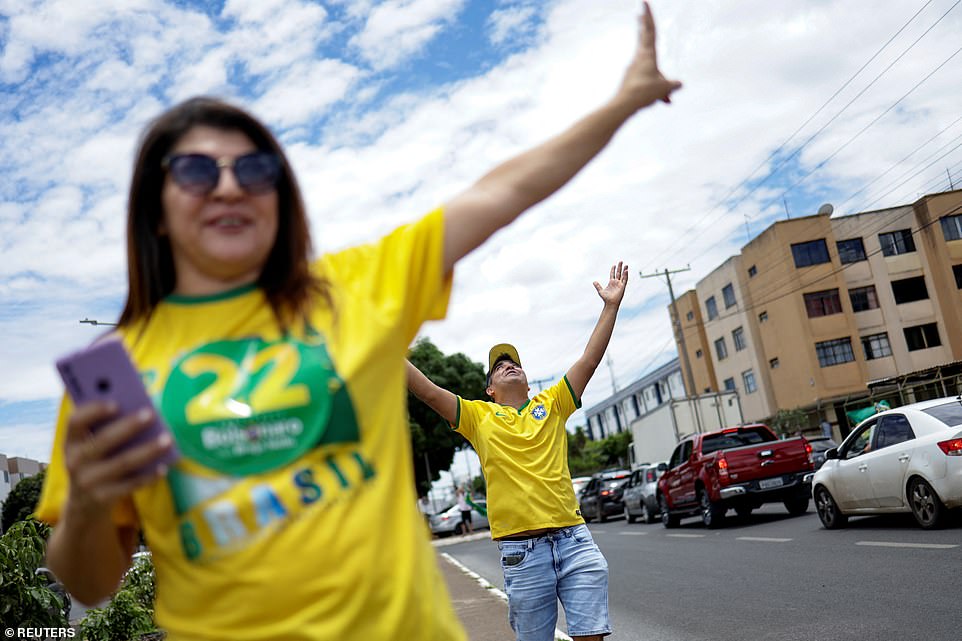 Supporters of Brazil’s current President Bolsonaro on election day in the country’s capital Brasilia. The President previously came under fire for his disastrous handling of the Covid-19 pandemic, which left more than 680,000 dead in Brazil, as well as his vitriolic style and disdain for political correctness

President Biden’s administration quickly stepped in to add that it will move quickly to recognise whichever leader is democratically elected.

The government urged Brazil to ensure a ‘free, fair, credible, transparent and peaceful’ election, adding that it would review relations with the South American country if anti-democratic methods are used.

Earlier this month, one of Bolsonaro’s sons, Eduardo, met Trump supporters in the US where he alleged that his father would be ‘the victim of the largest electoral fraud ever seen’ – words almost identical to Trumps after he lost the 2020 election. 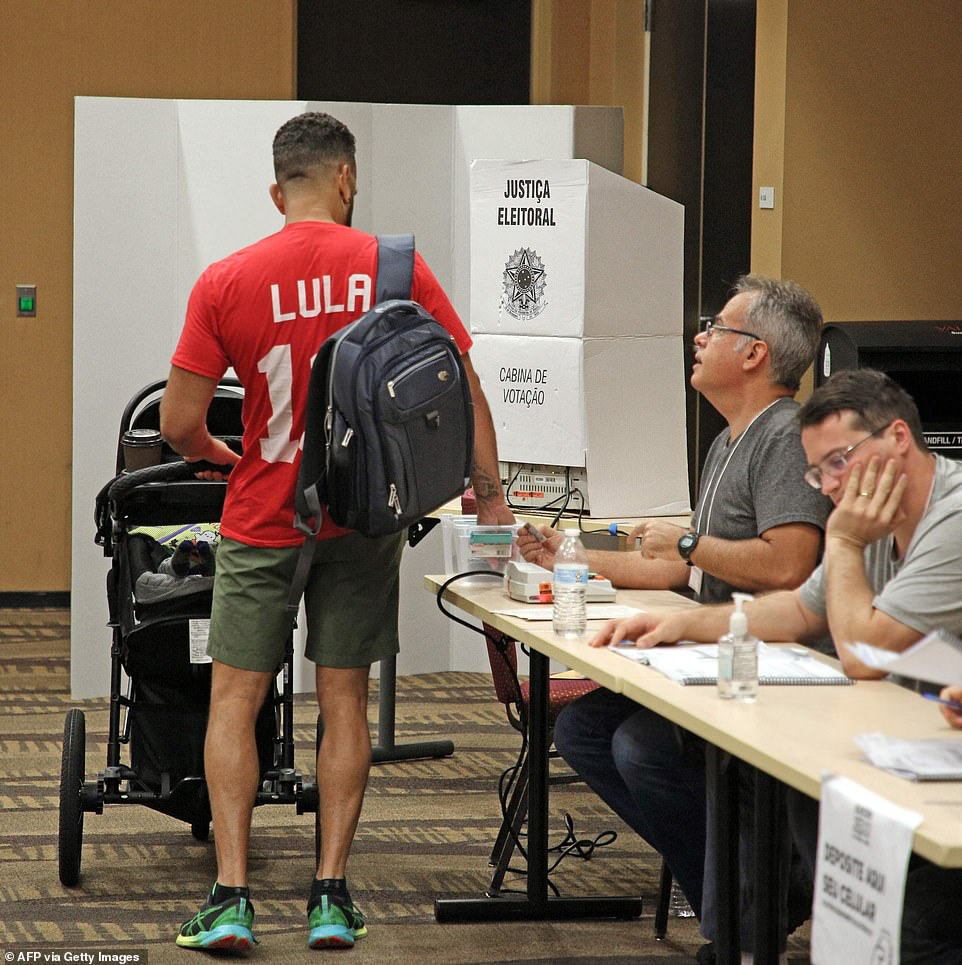 A Lula supporter leaves his phone with election officials at a polling station before casting their vote in the ballot in Florida. Florida has the second largest number of Brazilians voting in the United States

The final poll from Datafolha institute on Saturday revealed that 52 per cent of voters were in favour of the left-wing candidate, with 48 per cent supporting the current leader. But when Bolsonaro was last elected, he performed better than any predictions.

President Bolsonaro was seen wearing a yellow and green t-shirt casting his vote in Rio de Janeiro minutes after the polls opened while Lula voted in his hometown of São Bernardo do Campo in São Paulo state.

Greeting supporters outside the polling station, Bolsonaro said: ‘God willing, we’ll be victorious later today. Or even better, Brazil will be victorious.’

The left-wing candidate, however, said he was ‘confident in the victory of democracy’ and that he would seek to ‘restore peace’ in the divided nation if elected. 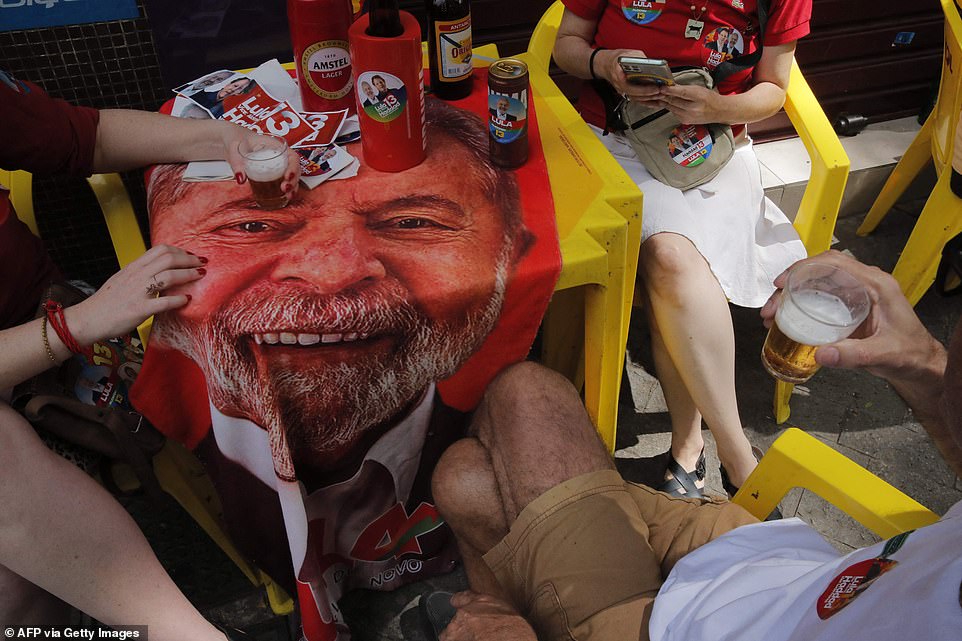 Brazilians still remain split over which man is best to lead their country as the fraught election closes.

Eliane de Oliveira, a 61-year-old lawyer who voted in Rio, said: ‘I think this has been the best government Brazil has ever had.’

She added that she was happy to have a Government that ‘was not corrupt’ alluding to the corruption scandal surrounding Lula.

The former president was the country’s most popular leader when he left office in 2011, after lifting millions out of poverty with social programmes. 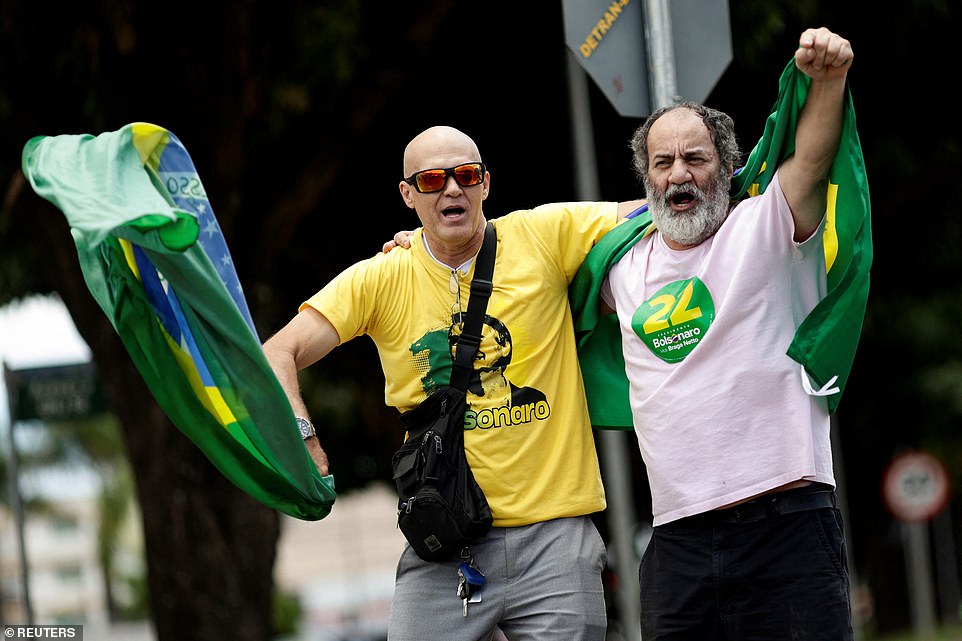 But he then became mired in a massive corruption scandal and was jailed for 18 months, before his convictions were thrown out last year. The Supreme Court found the lead judge was biased, but Lula was not exonerated.

If he wins, he faces a hostile Congress dominated by Bolsonaro lawmakers and allies.

Others are happy to support the former leader. One P.E. teacher, Gustavo Souza, voted for Lula in ‘the hope of improving people’s lives’.

Like many, he said he was ‘scared’ about the outcome and had fears that Bolsonaro would not accept the result.

The teacher added: ‘People have become so radical. They will need some maturity… or it will turn into the third or fourth world war.’

Brazil’s 156 million voters on the electoral ballot will cast their vote tonight until 8pm UK time. The result of the election is expected to follow within a matter of hours.

Oscar Contender ‘All That Breathes’: When Birds Fall From The Skies Of Delhi, Two Brothers Come To Their Aid
Recent Posts