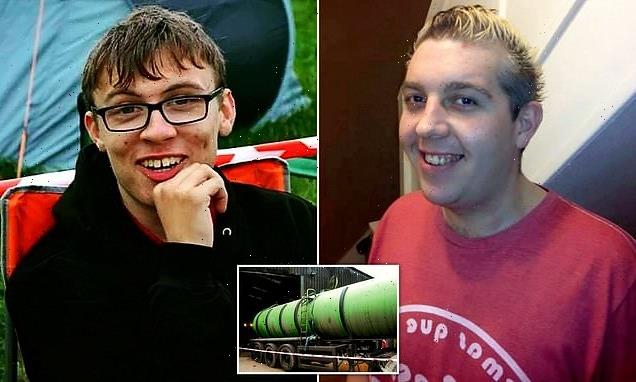 Food waste recycling firm where father-to-be, 19, and his colleague, 35, drowned in tanker of semi-liquid PIG feed during their shift is found guilty of corporate manslaughter

A food waste recycling firm where a teenage father-to-be and his colleague drowned in a tanker of semi-liquid pig feed has been found guilty of corporate manslaughter.

Nathan Walker, 19, and Gavin Rawson, 35, were working at Greenfeeds Ltd when they were overcome by toxic fumes and collapsed.

The two men, who were yard workers at the firm’s base, were found face down in the liquid inside the tank on the afternoon of December 22, 2016.

They were pronounced dead at the scene at Church Farm, on Normanton Lane, Normanton, Leicstershire.

Following a six-week trial at Leicester Crown Court, the company was found guilty of two counts of corporate manslaughter.

The firm’s directors, Ian Leivers, 59, and his wife Gillian, 60, of Newark, Nottinghamshire, were also convicted over the deaths alongside employee Stewart Brown, 69.

Mr Leivers was found guilty of breaching health and safety rules while his wife was convicted of two counts of gross negligence manslaughter.

She was also convicted of health and safety breaches.

Brown, of Mansfield, Notts, was found guilty of health and safety breaches but was cleared of two counts of gross negligence manslaughter.

Nathan Walker (left), 19, and Gavin Rawson (right), 35, were working at Greenfeeds Ltd when they were overcome by toxic fumes and collapsed

Jurors heard the company produced bio-fuel and pig feed from recycled products which were then delivered using road haulage tankers.

On the afternoon of the tragedy Mr Walker had climbed into a tanker to clean it with a power washer so that it could be emptied of pig feed.

Tragically, he got into difficulties and when he shouted for help, Mr Rawson dashed over to help.

He selflessly climbed inside the tanker and tried to haul Mr Walker to safety but both men became overcome by the fumes and drowned in the liquid.

Both men were pulled from the tanker after a saw was used to cut holes in the side of it.

A post-mortem examination concluded they died as a result of drowning in the animal feed.

The court heard the men had been instructed to clean the tanker by Mrs Leivers and Brown despite no risk assessment being in place.

Police found that staff at the company had previously expressed concerns after dangers of cleaning the tankers without breathing apparatus but they were ignored.

Detective Constable Kirsty Iqbal, of Leicestershire Police, said: ‘Both men went to work on the day of 22 December 2016 at Greenfeeds Ltd where they should have been looked after and their safety should have been paramount.

‘Instead investigations showed that the system which was used to clean out the tankers at Greenfeeds Ltd was so fundamentally dangerous that fatal consequences were virtually certain.

‘Mr Walker and Mr Rawson had their futures taken away from them simply because the firm did not have the correct safety procedures and equipment in place. Their deaths should never have been allowed to happen.

The two men’s families released poignant tributes to them following the verdicts. 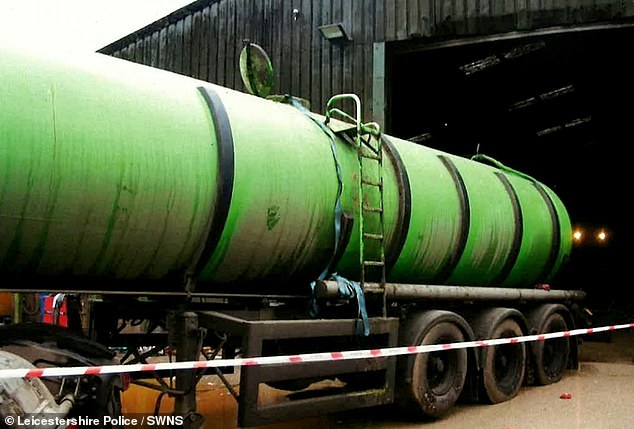 The two men, who were yard workers at the firm’s base, were found face down in the liquid inside the tank on the afternoon of December 22, 2016

In a statement, Mr Walker’s family said: ‘Nathan was only 19 years of age when his life ended through no fault of his own.

‘Nathan was expecting his first child with his partner when he died. His son was born 15 days after his death. Nathan was so excited about becoming a dad.

‘He should have been here to see his son born. He should be here with his son now.

‘He was a healthy, young man with his whole life ahead of him.

‘Nathan’s death was cruel and there was no sense in it. The shock, horror and grief of hearing that our son had been killed will stay with us for the rest of our lives.

‘Nathan had only worked for Greenfeeds Ltd for two months.

‘The company had no safety measures in place and that has cost two young men their lives as not only did Nathan die that day but Gavin Rawson also lost his life bravely trying to save our son.’

In a statement, Mr Rawson’s family paid tribute to their ‘hero’.

They said: ‘Three days before Christmas 2016, our much loved son, brother and uncle, Gavin was snatched away from us in seconds with no warning, no reason and no explanation.

‘No one should have to hear about their son’s death like we did. If only Health and Safety guidance had been followed, Gavin would still be here. We just want him back in our lives but know we can’t have him.

‘Although it breaks our hearts, we are so proud of Gavin and what he did that day. He did what he always did and went to help someone in need, despite the danger to himself.

‘He was our hero and we will always remember him that way.’

The Leivers and Brown were released on bail and ordered to return to court on June 16 for sentencing.