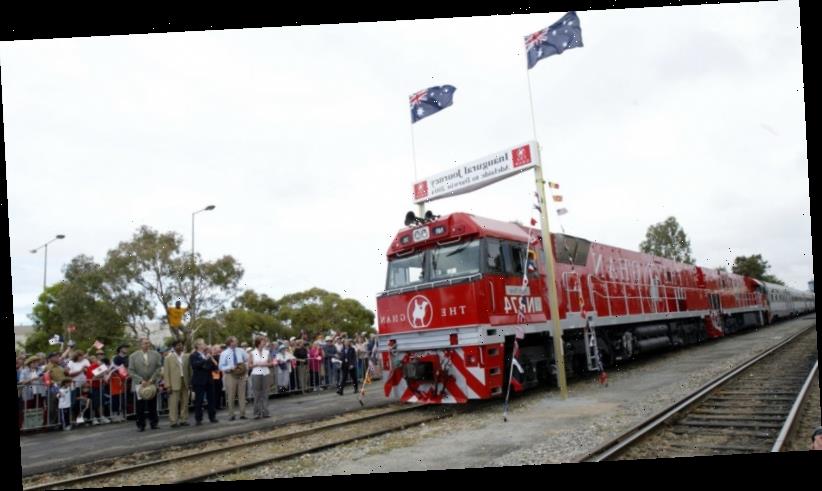 From the Archives, 2004: After 74 years the Ghan reaches Darwin

The Ghan, the train that showed it can

The train that never-never would, proved it could. The Ghan arrived in Darwin yesterday after its 2979-kilometre inaugural journey from Adelaide, breaking through a giant banner at Darwin Station at 5pm local time. 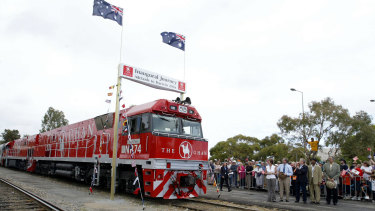 The Ghan leaves Adelaide for the inaugural trip to Darwin.Credit:Bryan Charlton

Thousands of locals lined the track to wave on the train in typical Aussie fashion. Some chose to celebrate the historic journey by drinking a tinny and waving while others chose to give a Top End welcome with their rear end. Dozens of men and women flashed their backsides at the passing train. It wasn’t even moonlight, but they showed their moonshine.

Perhaps the most excited VIP was train buff Tim Fisher who threw his Akubra up in the air after arriving in Darwin. “It’s fantastic. I salute the Ghan,” Mr Fisher said. “This train is bound for glory right through the territory and well done everyone involved.“

The longest passenger train trip in Australian history left Adelaide on Sunday after 74 years of political procrastination and wishful thinking, but what a sight it was: a 2000-tonne, one-kilometre-long procession with two locomotives and 43 carriages.

The journey was broken up with public celebrations in Port Augusta, Tennant Creek and Katherine, where many locals were stunned at the sight of the train, especially many Aboriginal children who had never seen a train before. 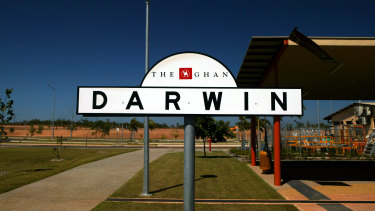 The new Darwin station awaits the Ghan on its inaugural trip.Credit:Peter Braig

Two of the luckiest people on board were Ann and Bill Wiechel from the Mornington Peninsula who won a prize in 1982 to travel on the inaugural journey. Some 22 years later, they were able to collect. “It’s fabulous, it’s marvellous,” Mrs Wiechel said.

Despite being in the back seat of the large passenger carriage, Mrs Wiechel enjoyed the social nature while mingling with the other passengers who had paid $2500 for a day-night seat, which will cost $440 when regular services start on February 8. “It’s far more friendly and social being down here instead of being stuck in a cabin,” she said.

At the public welcome in Darwin yesterday, Ms Martin said the train would bring 30,000 passengers to the territory each year in superb style. Mr Rann said the Ghan trip would become one of the world’s great train journeys, up there with the Trans Siberian and the Orient Express.

The journey was marked by an incredible show of public spirit, especially at Darwin where the Dorman family came to celebrate the Ghan’s arrival. Margaret Dorman and husband Simon, with children Ned, Matilda and Clancy, came to see the first freight train last month, and they wanted to be part of the latest celebrations.

“It’s been such a build-up, and now for it to come to fruition, it’s fantastic.“

A national dream came true yesterday as 400 people embarked on The Ghan’s inaugural passenger journey from Adelaide to Darwin.

The historic rail trip began when the mighty train broke through a giant banner at Adelaide’s Keswick Rail Terminal at 12.20 pm.

It was 10 minutes late, but the 2979-kilometre route is the realisation of 74-year-dream of transcontinental travel. The train is due to arrive in Darwin tomorrow afternoon.

Mr Fischer, a South Australian rail envoy, was carrying a laminated list of standard rail gauges. “The trip will be a buzz. It has a dual purpose, for freight and tourism. It will go well.“

He said it would help make Adelaide the mini-Chicago of Australia – a transport and tourism hub. The Ghan began hauling freight last month.

Mr Collins, a Darwin resident and a former federal transport minister, said the extension of the line from Alice Springs to Darwin was a nation-building exercise and a commitment of faith. “I’m taking this trip, because like thousands of others I’ve been working to get this railway built for 35 years,” he said. “It’s going to be absolutely magnificent once she gets on the track with 43 silver, shining carriages. I would not have missed this for anything.“

During the official celebrations at Keswick railway station, light showers sent some VIPs scurrying for cover to a nearby marquee, where dignitaries snacked on mini-hamburgers, curried chicken, nori rolls and lamingtons, and drank champagne and beer.

Premier Mike Rann said: “Today we are celebrating nation-building and building a bridge between our past and the future. This is the joining of Australia with the last transcontinental railway line to be built in the world.

Some Gold Kangaroo guests – a business class – paid $12,000 one-way for the privilege of being an inaugural passenger, considerably more than the normal fare of $1740.

Jo and David Chitty from Sydney, celebrating their 40th wedding anniversary, parted with $24,000. The English-born couple became Australian citizens last year and declared the pioneering spirit was not dead. “We are going into the unknown,” Mrs Chitty said. “What a way to celebrate 40 years of marriage.“

The $1.3 billion extension of the 1420-kilometre Alice Springs to Darwin rail line is impressive enough 74 years after the first Ghan left Adelaide for the Alice. But there are many more impressive statistics. The Ghan, at one kilometre long, is the longest passenger train in Australia’s history. It comprises two locomotives, 43 carriages and weighs more than 2000 tonnes.

During the six-day return trip, more than 8000 meals will be prepared by eight chefs.

The journey will be broken by community receptions at Port Augusta, Alice Springs, Tennant Creek and Katherine, allowing passengers to stretch their legs and work off any excess consumption.

The regular Adelaide to Darwin service starts on February 8 and ticket sales have surpassed $15 million. International bookings account for 35 per cent of sales. Fares for the one-way trip are $440 for a Red Kangaroo day/nighter seat, $1390 for a sleeper cabin and $1740 for the Gold Kangaroo sleeper cabin, which includes all meals in the restaurant car.

Great Southern Railway had appointed the Crocodile Hunter, Steve Irwin, as ambassador to The Ghan and named a locomotive after him. But the Irwin locomotive was missing yesterday. The official word was it crashed last month in Port Macquarie and is being repaired. 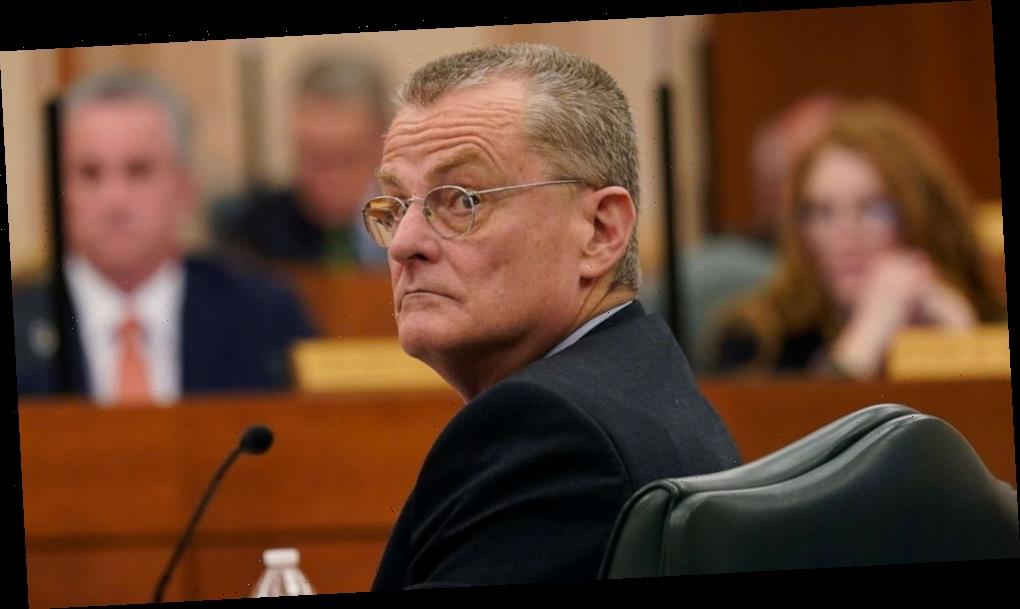 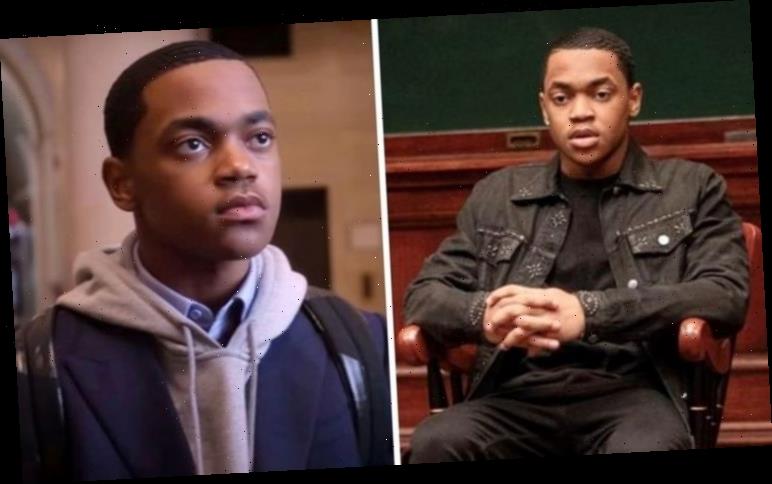