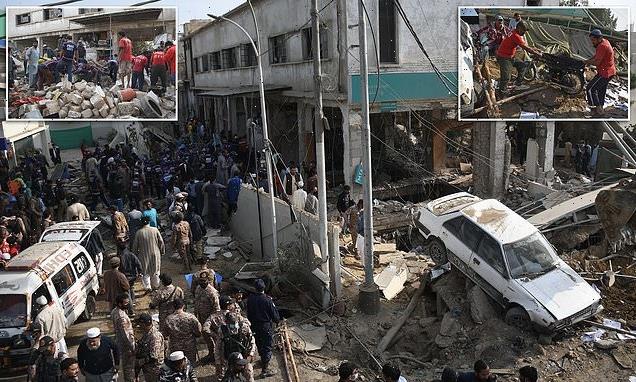 A powerful gas explosion in a sewage system in southern Pakistani killed at least 12 people and injured 11 others on Saturday, police and health officials said.

Police spokesman Sohail Jokhio said the blast was caused when something ignited gas that had accumulated in the sewer beneath a local bank building in the Shershah neighborhood of the port city of Karachi.

The powerful blast destroyed an HBL bank building. The entire structure of the Shershah bank branch was damaged and police have not ruled whether it was the work of militants.

The floor was blown out and furniture was mired in sewage from below. The impact of the blast damaged several cars parked nearby and threw debris onto a petrol station on the other side of the building. 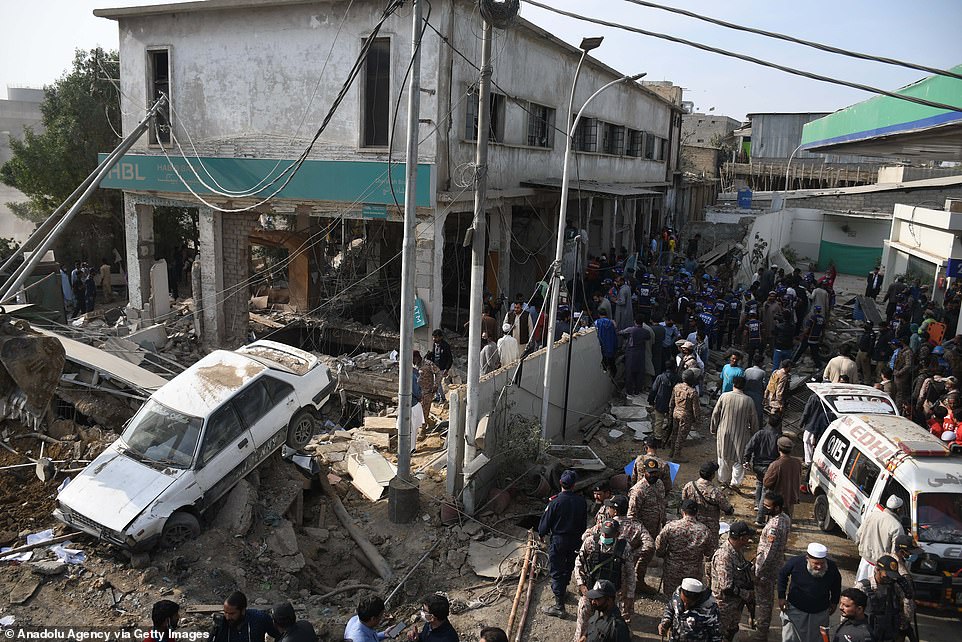 A view of the site after a gas explosion near a bank in Karachi, Pakistan today. Police have not ruled whether it was the work of militants 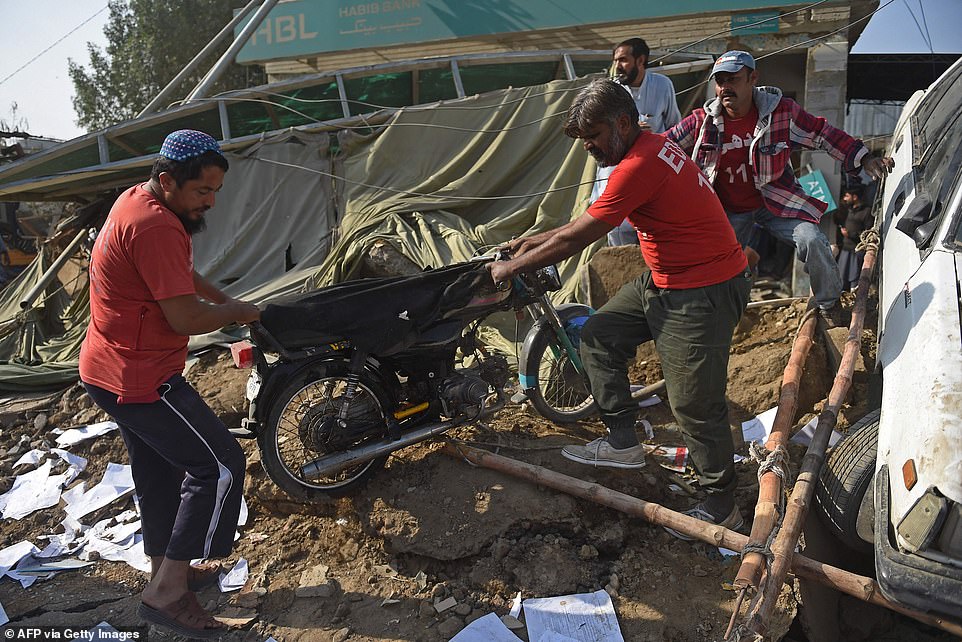 Rescuers hold a motorbike amid the debris of a bank building that collapsed after the gas blast in Karachi, the largest city in Pakistan 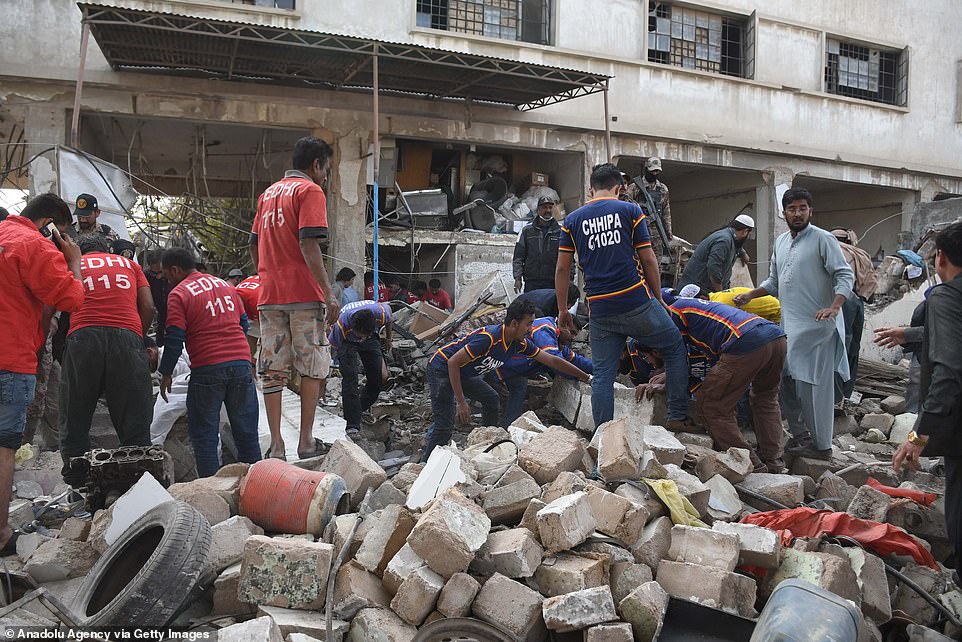 The blast took place in the Paracha Chowk area of the Shersha, on northern bank of the Lyari River in Karachi 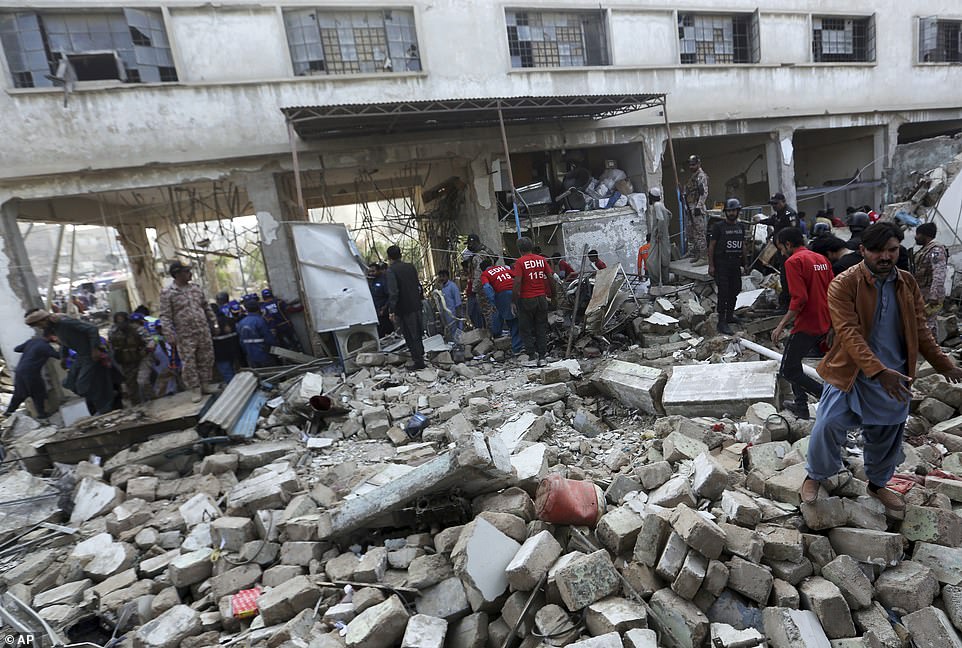 Mr Jokhio said it was not yet clear what ignited the gas but a team of explosives experts had been summoned to investigate.

Passerby Mohammad Sameer said he was in the crowded bank branch moments before the blast but left shortly before the explosion, and then rushed back to the damaged bank to rescue victims.

He said: ‘Thank God I left the venue otherwise I would also been among the affected ones.’ 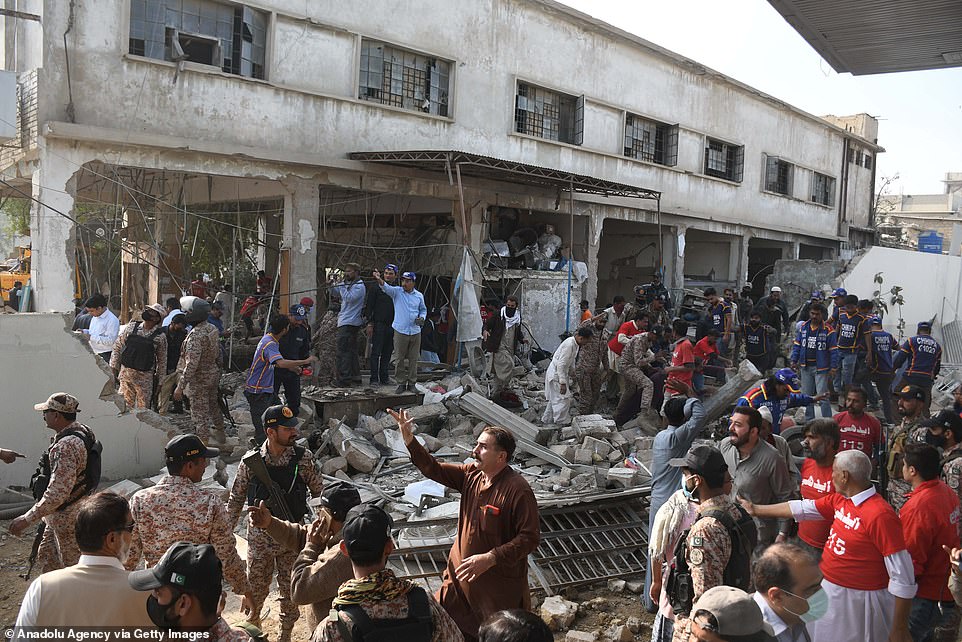 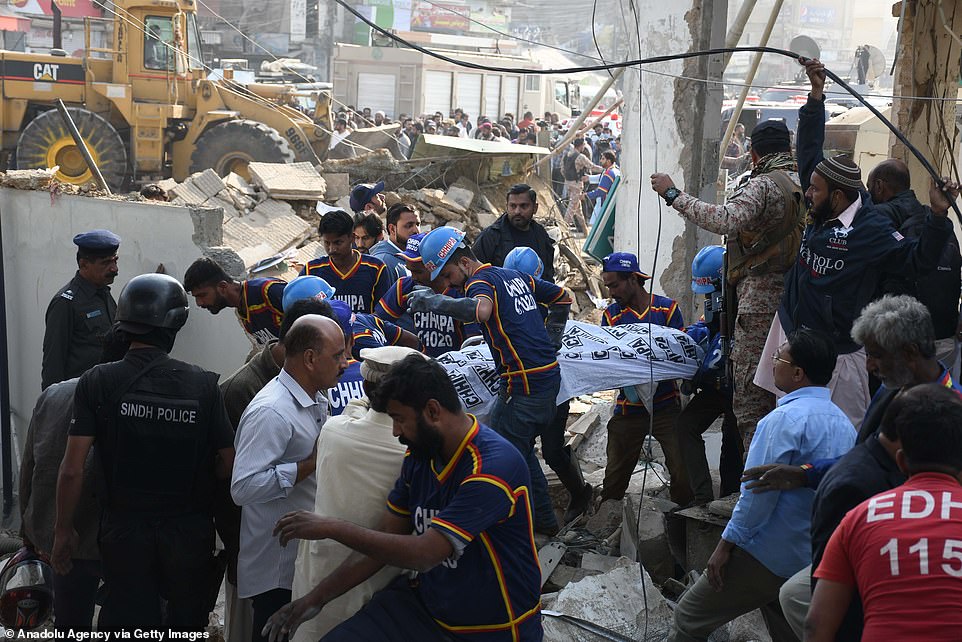 At least more 11 people were injured by the blast. A faded yellow digger was deployed to clear some of the debris at the scene

Dr. Sabir Memon at Trauma Center Karachi said 10 people were killed and 13 others were injured, at least three critically. He said several injured were sent to the intensive care unit.

He said investigators were not ruling out the possibility the explosion was the work of militants.

‘We will come up with a clear version once the explosives experts complete their job,’ he added. 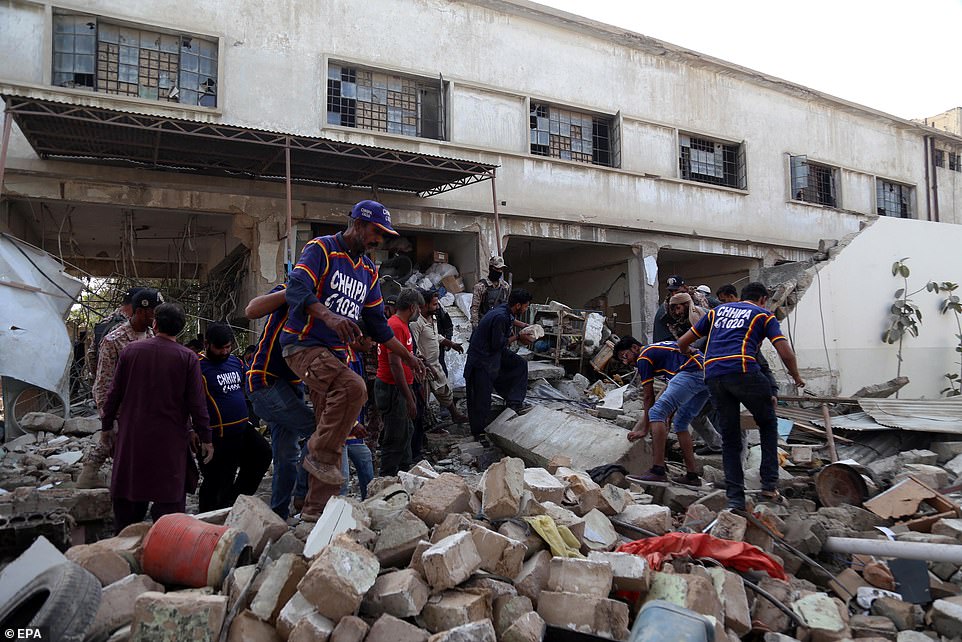 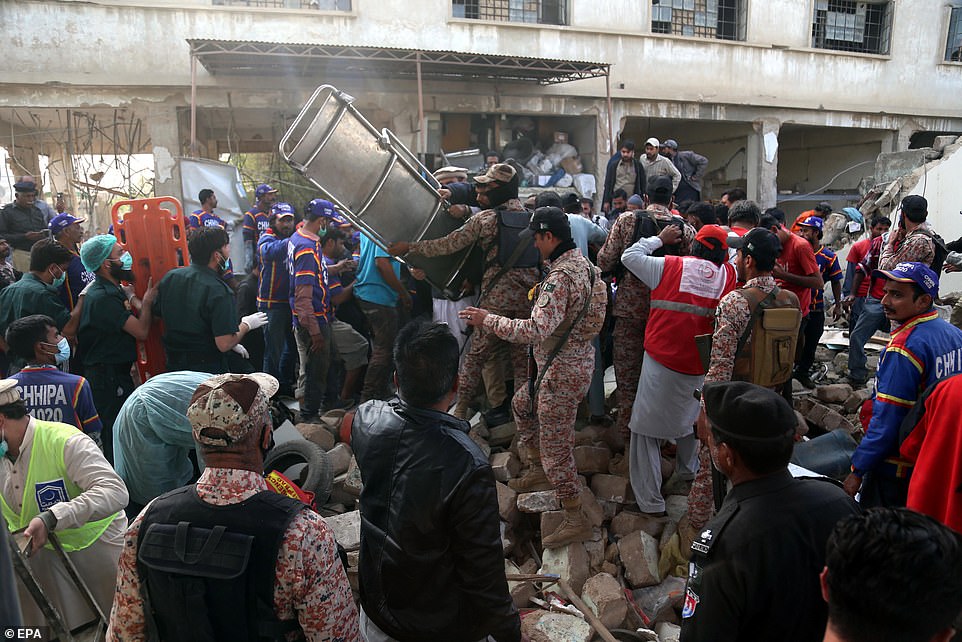 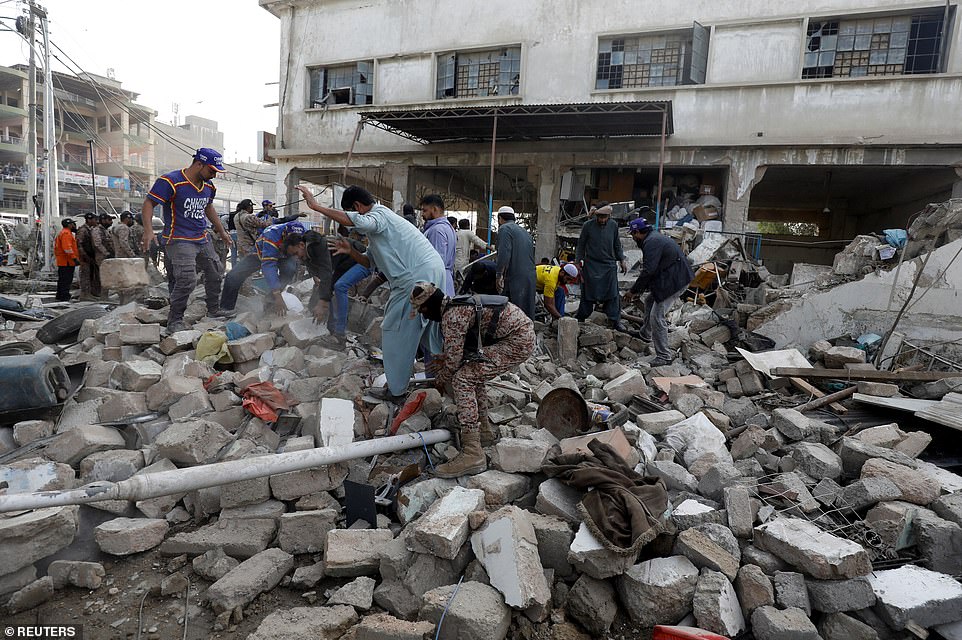 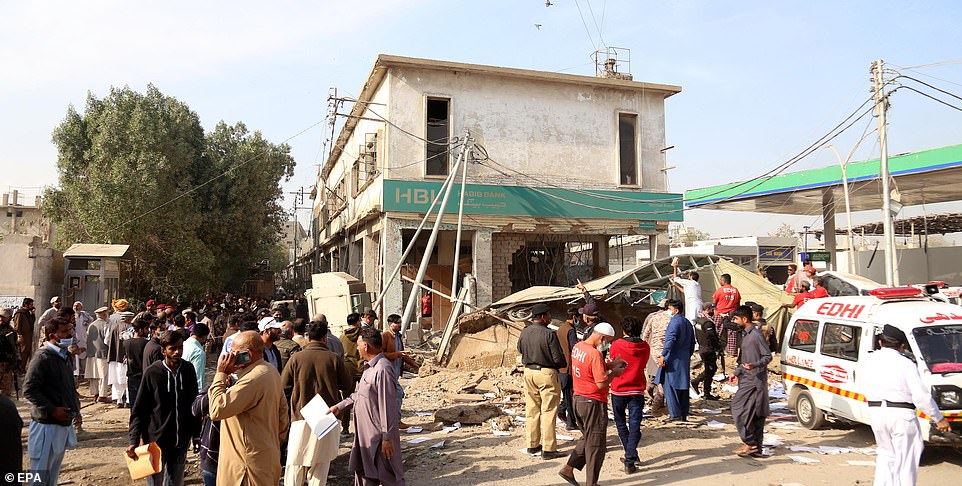 Much of the bottom floor of the building was blown apart, with debris flying across the road and landing in the petrol station opposite 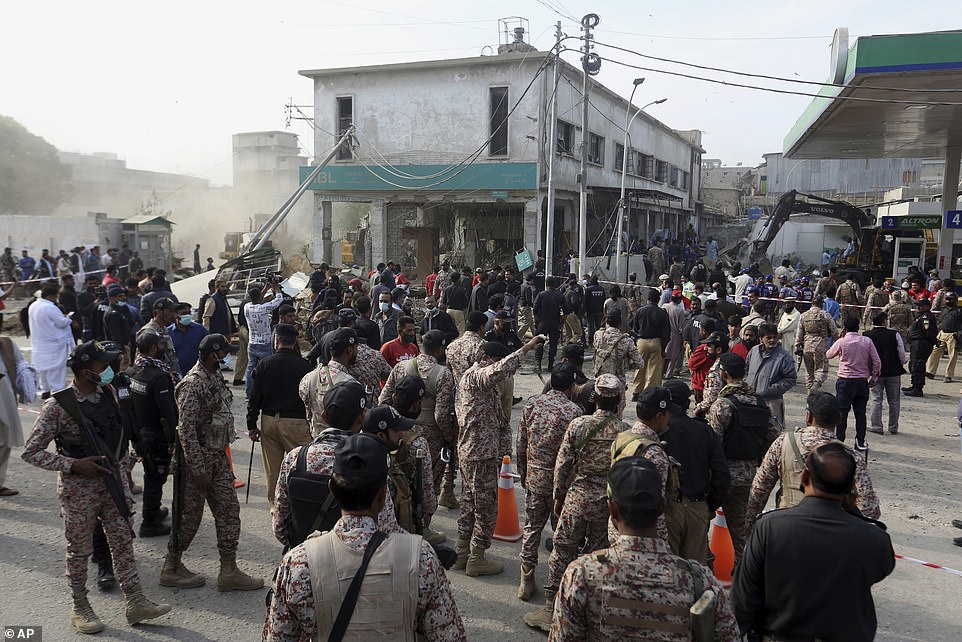 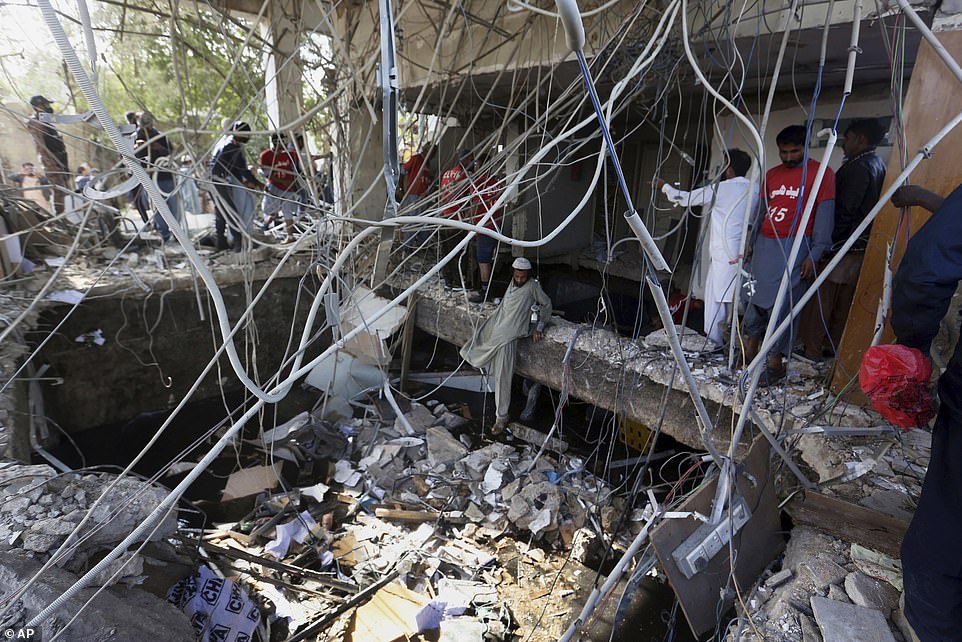 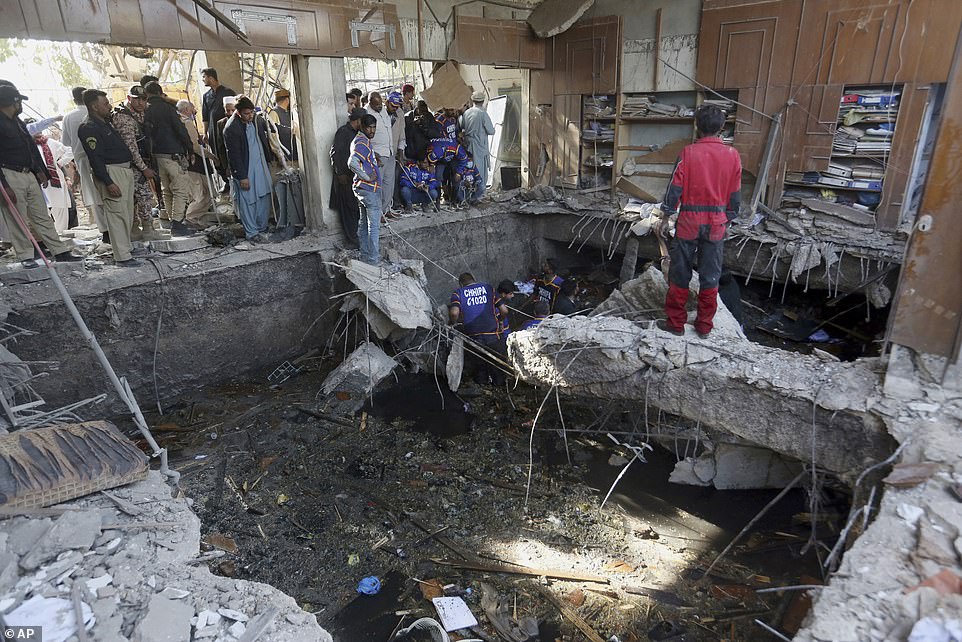 The explosion ripped through the framework of the building, revealing concrete ripped apart and metal poles within its structure

Many sewage channels in the city have been covered, mostly illegally, by constructing concrete structures over them.

Mukhtar Abro, a local administrator, said illegal construction over the sewage area of the explosion was under notice to vacate and the structures were to be demolished.

On Saturday evening another bomb, allegedly planted in a motorcycle parked in a bazar, exploded in the southwestern city of Quetta, killing one passerby and wounding four others.

Senior officer Fida Hussain said two of the wounded were transported to hospital in critical condition. No one claimed responsibility for the blast.