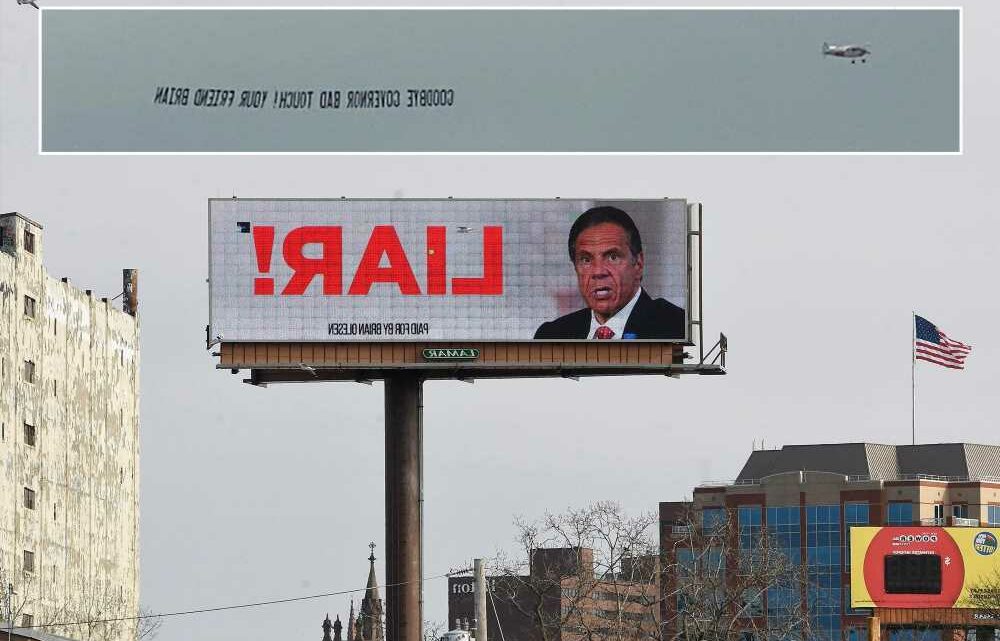 Cuo is me: Former ‘Cuomosexuals’ lament fall of the groping gov

So much for the friendly skies.

An Albany man who rented billboards bashing Gov. Andrew Cuomo hired a plane to fly over the Capitol Wednesday with the message: “GOODBYE GOVERNOR BAD TOUCH! YOUR FRIEND BRIAN.”

Brian Olesen, 50, was inspired to take his frustrations to new heights after the disgraced New York leader’s “sickening” press conference Tuesday, “where he was attacking victims and his justifying actions.”

“Without a doubt, it’s a celebration,” Olesen said of his high-minded stunt.

The “friend” bit is “obviously sarcastic,” he added, quipping, “I’m one of his biggest supporters.”

He continued, “No, I think the man is a disgusting human being.”

Olesen, the owner of Albany-area gun store American Shooter Supply, previously took out an electronic billboard along Interstate 787 that first targeted Cuomo with his photo and the word “Impeach!” then “Resign Now!”

It was changed in March to read “Liar!” in big red letters to coincide with the soon-to-be-former governor’s scandals — starting with the nursing home crisis and alleged cover-up of the true death count of residents from COVID-19 to the sexual harassment accusations that brought him down.

“I didn’t want to spend the money but after being exposed to that psychotic I had to,” said Olesen, adding he spent around $12,000 on the flyover missive and billboard, which now reads “Pig.”

“Between the senior citizens and the 11 women he harassed that we know of, this man will go down as the worst political servant we’ve ever seen in my lifetime,” he said.

Olesen, who said he is part Italian-American, was also outraged that Cuomo appeared to try to write off his creepy behavior with women as “cultural behavioral differences” during his resignation announcement.

“He insulted every single Italian-American in the country by blaming his heritage for how he treats women,” Olesen said. “It shows how out of touch he is.”

Asked whether he would have any other eye-grabbing messages for Cuomo, Olesen said “stay tuned.”

For now, he thinks the fallen politician — who officially leaves office Aug. 24 — should get “counseling” and “move out of the country.”

“What an embarrassment he is to the state of New York,” Olesen said.