Singapore: Malaysian Prime Minister Muhyiddin Yassin has fallen on his sword and resigned after his ruling bloc was stripped of its parliamentary majority when 14 MPs of its biggest party withdrew their backing.

An embattled Muhyiddin, 74, had sought to cling to power with an offer last Friday for a bipartisan solution to the political crisis in which he proposed to allow opposition MPs to chair half of the government’s committees and pledged to call a new election by the end of July 2022.

However, the deal was rejected by the main opposition bloc, Pakatan Harapan, and the biggest coalition party, the United Malays National Organisation (UMNO), which had attempted to remove him for months.

After a meeting between Muhyiddin and King Sultan Abdullah Ahmad Shah on Monday the royal palace said now was not the time for a general election because of the COVID-19 pandemic.

The palace said Muhyiddin would remain in caretaker capacity until a new prime minister was appointed. 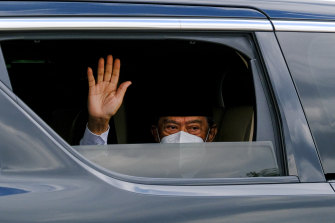 In a national address, Muhyiddin said he did not have the majority and had no choice but to resign.

He said he was asked by many people to stay and wanted to preserve the ruling coalition until the pandemic was over but took aim at “greedy people who want to take power”.

“They do not care about the health of the people,” he said. “I will never align myself with kleptocrats or the sacrifice of the judiciary and constitution.

“I have tried my best in this crisis we are facing. I hope the new government can be formed soon to carry on the work.”

The question now turns to who will succeed him and whether any can convince the king that they can command a majority in the 222-seat lower house. Deputy Prime Minister Ismail Sabri of UMNO, who was only appointed to that position last month, has been regarded as the front-runner, but other candidates include Opposition Leader Anwar Ibrahim and senior UMNO MP Tengku Razaleigh Hamzah.

Having been installed in March 2020 after the collapse of the historic multi-ethnic government led by Dr Mahathir Mohamad, Muhyiddin becomes the shortest serving prime minister in Malaysian history.

In the end, the king himself was a key player in Muhyiddin’s demise.

It was an unprecedented public rebuke of the government late last month by the Yang di-Pertuan Agong, as the king is known, that triggered UMNO to move on him. The leaders of the party, which dominated Malaysian politics for decades, accused Muhyiddin and his cabinet of disrespecting the monarch by not gaining his approval to revoke a series of laws it had introduced during a state of emergency that ran from January until August 1.

After more than a dozen of its MPs pulled support Muhyiddin flagged that a confidence vote would be held in parliament on September 7, setting the stage for weeks of horse-trading.

But the king’s request last week that the vote be brought forward ultimately forced the issue.

The political instability comes with the country in the midst of a COVID-19 outbreak that has been the worst in south-east Asia on a per capita basis.

The silver lining for Malaysia has been in its procurement and administering of vaccines. It has had one of the fastest national vaccination programs in the world in the past six weeks, with 53 per cent of its 32 million population now having had at least one shot and 33 per cent now fully vaccinated.

The vaccination scheme has been led by Oxford-educated Science, Technology and Innovation Minister Khairy Jamaluddin, who revealed the resignation of the cabinet on Monday.

“Thank you for the opportunity to, once again, serve the nation,” Khairy said on Instagram.