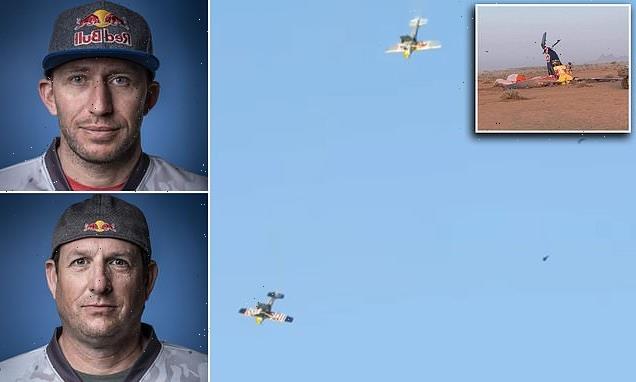 Red Bull DOESN’T give you wings! Groundbreaking mid-air plane SWAP sponsored by energy drink fails after aircraft nosedives and crashes – but neither pilot is injured

A never-before-attempted aerial stunt which saw two cousins attempt to swap planes via skydive in mid-air ended in failure after one of the aircraft nosedived out of control and crashed.

Sunday’s stunt over the Arizona desert involved Luke Aikins, 48, and Andy Farrington, 39, leap out of Red Bull sponsored single-engined Cesnas, then attempt to freefall into the other’s plane.

The stunt began well, with both men leaping out while their aircraft flew in a pre-prepared formation.

But moments later, Farrington’s planes began to spiral, and nosedived to the ground. Thankfully, neither man was injured. Aikins – whose plane crashed – did manage to make it into his cousin’s Cesna – with the other man left to parachute to safety.

‘It just went and instead of stopping in that 90 degree dive, it just kept going and got over on his back,’ Farrington said afterwards. ‘It was just not a chance.’

‘I thought I left Andy a good plane. I’m trying to think of what else I could have done to make it better for him when I left,’ Aikins said to USA Today. ‘We do what we can to prepare for this stuff and we hope it never happens. This is the best outcome of a bummer situation, really.’

‘You’re just happy everybody’s here and good and all that stuff, but just disappointed,’ he added.

The FAA said it did not grant a safety exemption for the stunt, which was livestreamed by Hulu, and will now investigate.

It remains unclear what, if any, authority it had to prevent the flight from taking off, and what consequences its organizers could now face.  DailyMail.com has contacted the FAA for a comment. 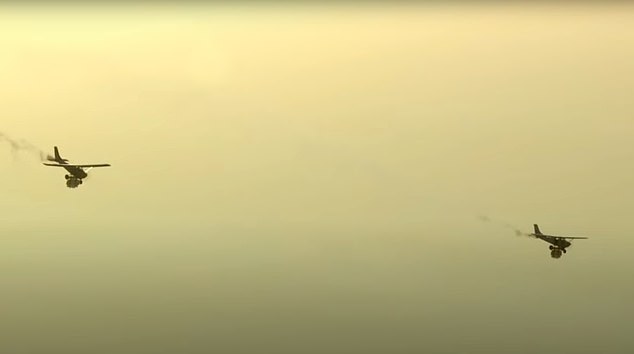 Skydiving cousins Luke Aikins, 48, and Andy Farrington, 39, attempted to make the first-ever dual skydive into separate airplanes but it all ended in failure 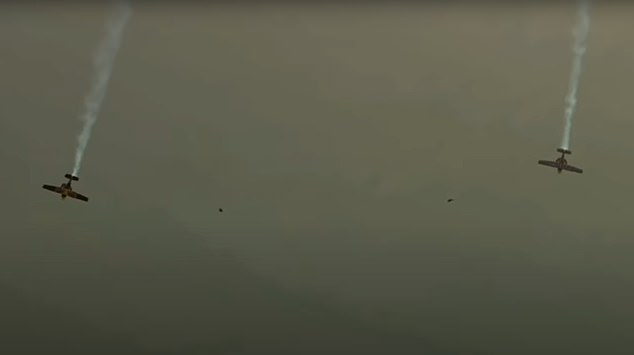 Initially it appeared as though the switchover was going well, but things suddenly spiraled out of control 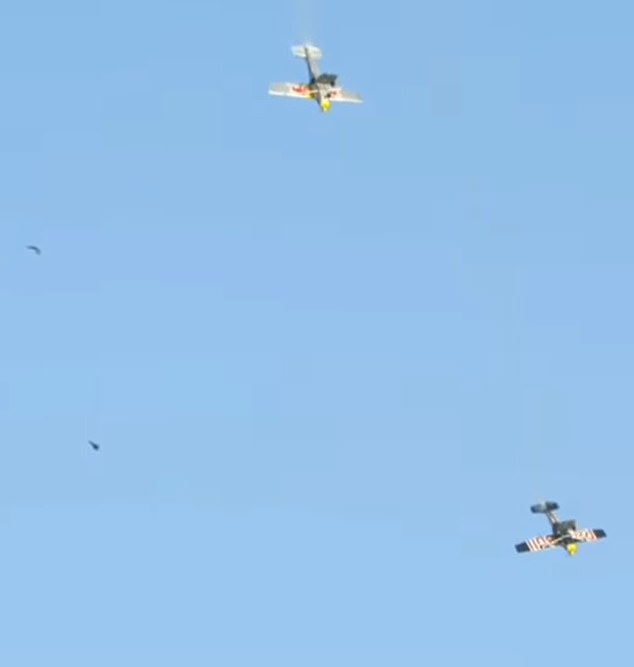 Although things appeared to be going well, seconds later, the blue aircraft went into a spin

The pair jumped out their respective aircraft at an altitude of 12,100 feet with the  airbrake system engaged on both planes.

Aikins was able to successfully get into the other plane, but Farrington couldn’t make it as the aircraft he was aiming for plummeted to the ground.

Farrington then deployed his parachute and safely landed in a remote area.

‘One of the two single-engine Cessna 182 aircraft used in the stunt crashed after it spun out of control. The pilot landed safely by parachute. The other pilot regained control of the second aircraft and landed safely,’ the FAA said.

The FAA said its agency is investigating the crash which occurred crashed west of Eloy. 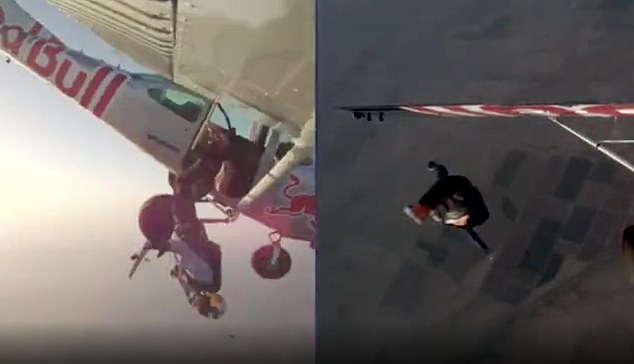 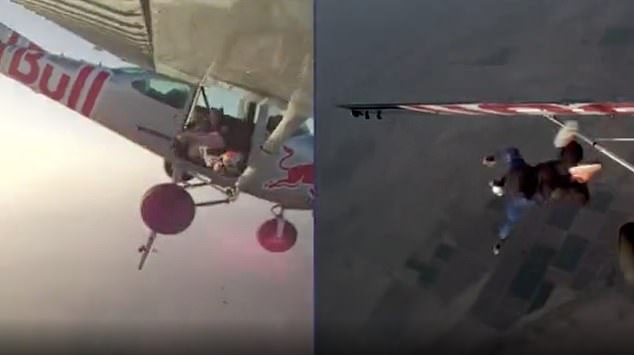 The experienced skydivers can be seen jumping out of their aircraft 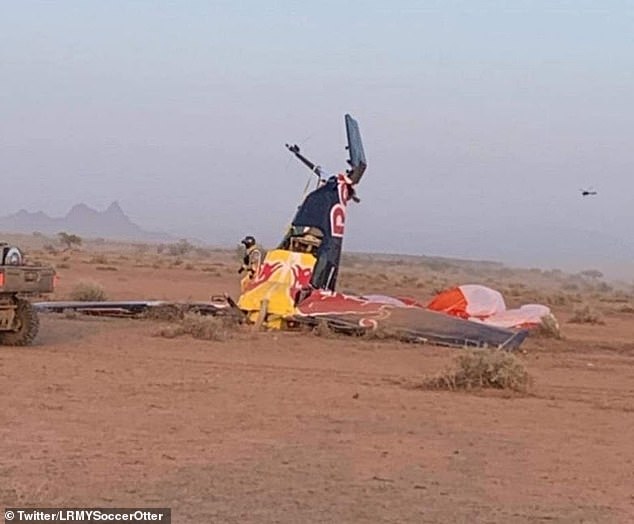 Just as both skydivers attempted to switch, one of the planes lost control and ended up crashing into the Arizona desert floor 12,000 feet below 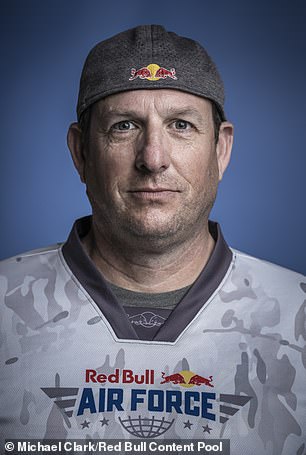 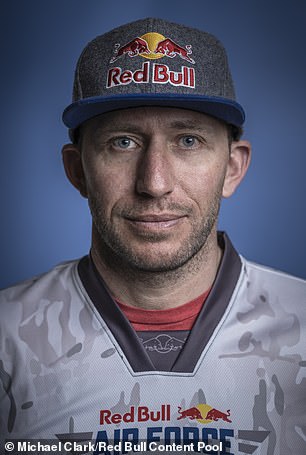 Luke, left, and Andy, right, are experienced pilots and free fallers who have been skydiving for decades 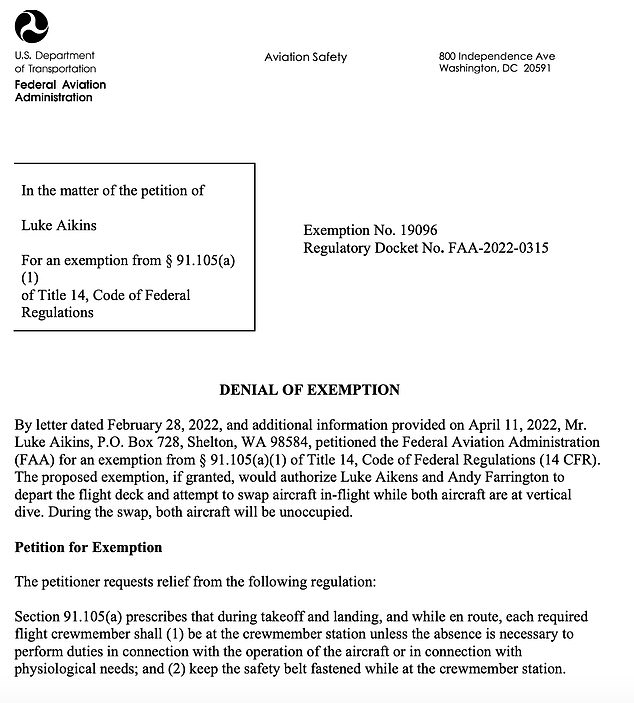 The FAA also revealed that it had denied Red Bull’s request for an exemption from FAA regulations regarding the safe operation of an aircraft.

It stated that the aerial demonstration was not in the public interest and that the flight would impact safety.

It is unclear what authority the body had to stop the flight from going ahead, and what penalties may now result from both pilots breaching FAA regulations.

Nobody was hurt in the accident as the skydiver without an aircraft simply used his parachute to make a routine landing on the desert floor.

The other plane was also able to land safely after the pilot regained control having managed to make it inside.

The cousins, based out of Washington, are experienced pilots and free fallers who have been skydiving for decades.

In 2019, Luke became the first person ever to survive a skydive with no parachute. He jumped out of a plane at 25,000 feet, then used special sensors to guide himself to a landing net.

In 2016, Aikins set a world record by freefalling 25,000 feet without a parachute and Farrington won the Red Bull Championship in 2003 and has recorded over 27,000 jumps- 100 of those with his older cousin.

On Sunday the pair took off from Sawtooth Airport in Elroy, Arizona, both piloting their own Cessna aircraft.

Once side by side in the air the planes were pushed into a nosedive at 120 mph, using a custom airbrake that was supposed to hold the aircraft in a controlled decedent. 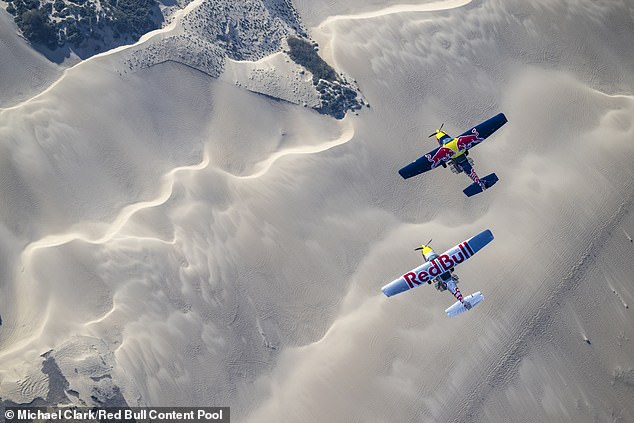 On Sunday the pair will take off from Sawtooth Airport in Elroy, Arizona, both piloting their own Cessna 182 single-seat aircrafts 14,000 feet in the air 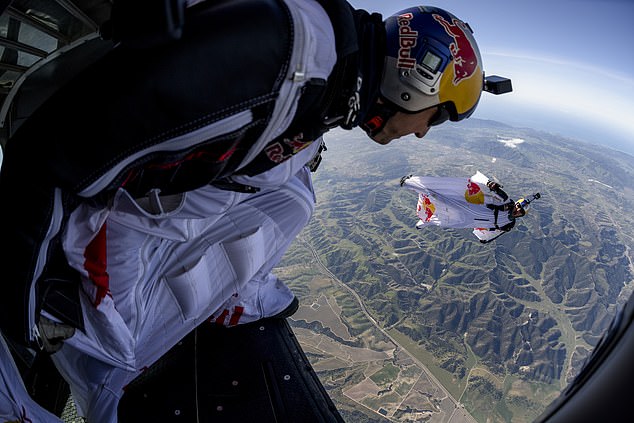 Aikins and Farrington will freefly skydive into the others aircraft and once inside the cockpit disengage the airbrake systems and take control of the planes, completing the plane swap 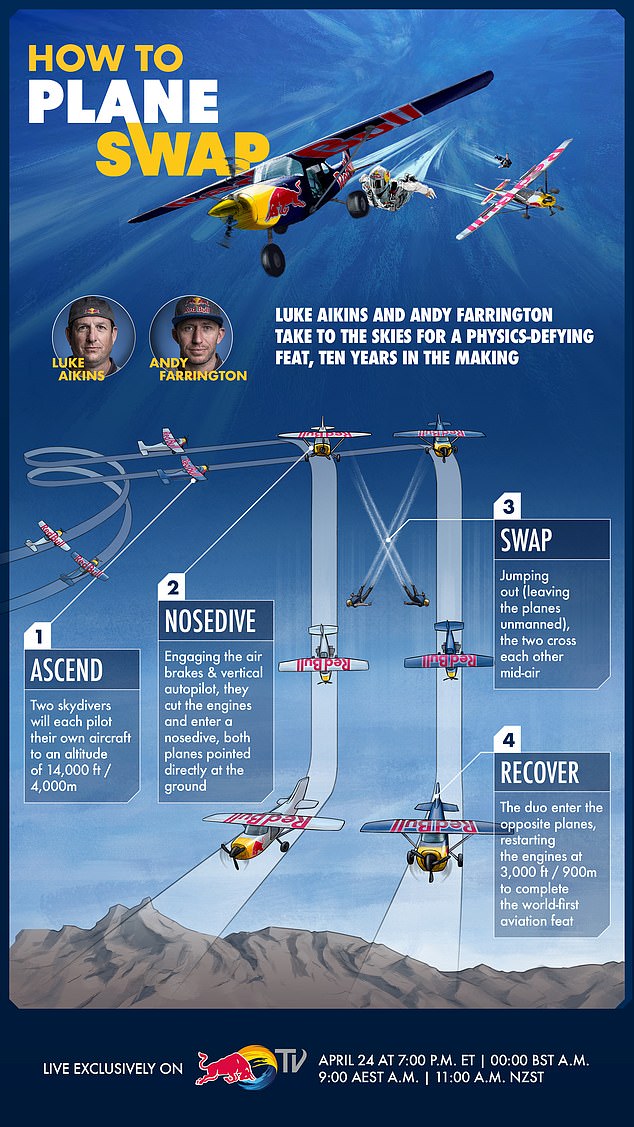 The cousins worked with fellow pilot and engineer Paulo Iscold to make the ‘plane swap’ stunt come to life.

He worked on designing the air-brakes that will keep the planes in a controlled vertical descent, slowing the planes down as they freefall towards the ground.

The cousins have already done several practice jumps from planes with the speed brakes installed and Farrington told Redbull they almost have it down.

‘It’s taking almost every notion of flight and almost crumpling up and throwing it away,’ Farrington said. ‘Like, we’re trying to create some drag. We’re trying to make the airplane fly straight down at a reasonable speed and making it so it works for our needs. With the science behind it, the data and everything that we adjusted and tweaked, it’s really close to being the way we want it.’

‘It’s the pinnacle of my career, and my goal is to inspire the world and show that anything is possible,’ Aikins said in a statement before Sunday’s stunt.

‘You can set your mind on something that at times seems wild, crazy and unattainable, but through ambition and creativity, you can make it happen.’ 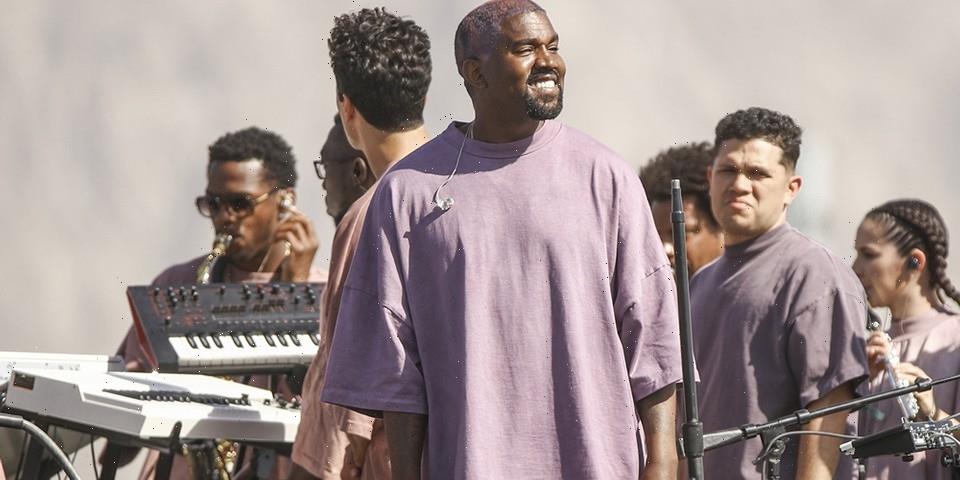 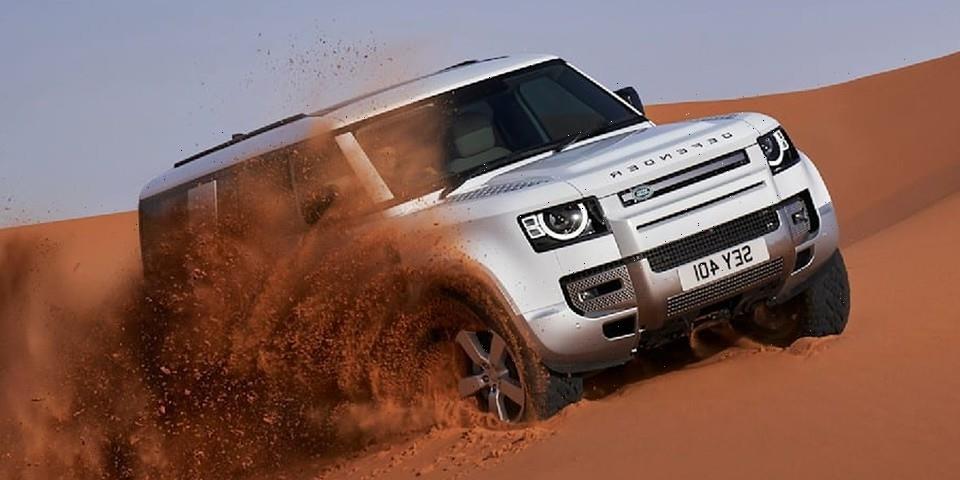