Buffalo: They were the innocent victims Joe and Jill Biden had come here to mourn.

The father of six who had gone to the grocery store to buy a birthday cake for his three-year-old son. The devoted parishioner who sang in the church choir and cared for her grandkids. The retired police officer who worked as a security guard to keep his community safe. 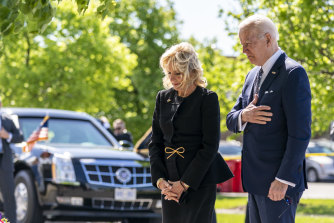 US President Joe Biden and first lady Jill Biden pay their respects to the victims of Saturday’s shooting at a memorial across the street from the TOPS Market in Buffalo, NY.Credit:AP

But Biden didn’t just visit this shattered city to grieve with the families of the victims. He also denounced white supremacy as “poison”, pushed for Congress to finally act on gun reform, and urged Americans to reject the “hateful and perverse ideology” that inspired Saturday’s Buffalo shooting in the first place.

Speaking after meeting victims’ families, Biden called out sections of the media and political figures for radicalising “angry, alienated, lost and isolated individuals” into believing racist ideas that falsely suggest white Americans are being replaced by minorities.

“Hate and fear have been given too much oxygen by those who pretend to love America but don’t understand America,” he said.

“I call on all Americans to reject the lie and I condemn those who spread the lie for power, political gain and profit. We cannot remain silent.” 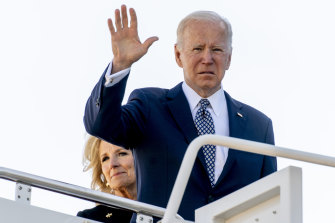 US President Joe Biden and first lady Jill Biden board Air Force One for Buffalo. Credit:AP

It was a searing speech, coming three days after 18-year-old gunman Payton Gendron walked into the Tops Friendly Market on Saturday afternoon, and opened fire on unsuspecting strangers. His actions, livestreamed on the internet and inspired by New Zealand’s Christchurch tragedy, killed 10 people and wounded three others, most of whom were black.

But whether Biden’s words will change anything is another question altogether. After all, all as Kayla Jones, the granddaughter of 65-year-old victim Celestine Chaney put it today, America has been here many times before.

“It’s getting ridiculous – we’re tired of burying loved ones to gun violence and hate,” the 24-year-old said after the speech.

“I truly believe that if we can’t get the guns off the streets we should just make it illegal to have them. Why do we need them?” 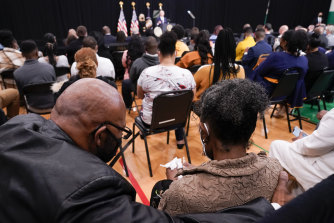 People listen as President Joe Biden speaks in Buffalo, in the aftermath of the racially-charged mass shooting.Credit:AP

Americans have a right to feel sceptical. While Australia banned all semi-automatic rifles and shotguns after the Port Arthur massacre, the right to bear arms has always been a fiercely protected right in the US.

Congress, too, has a history of inaction. Indeed, even after Sandy Hook Elementary School massacre of 2013, the pace of change was painstakingly slow.

Now facing a hostile Senate almost ten years later, the most Biden can do is repeat his calls for Congress to pass laws expanding background checks and assault weapons, or merely tweak around the edges with executive orders.

There’s also the question of mental health checks. Gendron evaded New York “red flag” laws that could have prevented him from owning a gun.

The law was designed specifically to ensure that people who exhibit signs of being dangerous to themselves or others can be denied access to guns, by order of a judge.

Yet, Gendron did exhibit such signs. As police confirmed earlier this week, he was held for a mental health-evaluation last year after making a threatening remark at his high school, in which he suggested he was plotting a murder suicide.

However, he later suggested he was merely making a joke, and was ultimately released from the hospital and then continued to slip under the radar of authorities.

As for the issue of domestic terrorism? Figures from the Anti-Defamation League suggest about 450 US murders have been committed by political extremists over the past decade – and nearly half of those murders were specifically tied to white supremacists.

But while such extremism is clearly a problem in America, it can also involve violence other than mass shooting, such as the January 6 Capitol attack (which involved fatalities), or the dangerous language or actions of right-wing politicians elected to office.

Before she entered Congress, for instance, Donald Trump supporter Marjorie Taylor Green appeared to support the idea of executing Democrats. In one post, from January 2019, Greene liked a comment on social media that said “a bullet to the head would be quicker” to remove House Speaker Nancy Pelosi.

Likewise, her Republican colleague Paul Gosar once posted an animated video that had been altered to depict himself killing Alexandria Ocasio-Cortez, a member of the Democrats so-called “Squad.”

Political reality aside, this was nonetheless a moment perfectly suited to Biden, a “Consoler-In-Chief” who lost his first wife Neilia and their 15-month old daughter Naomi in a car crash four decades ago, followed by their eldest son Beau, who died of cancer in 2015. 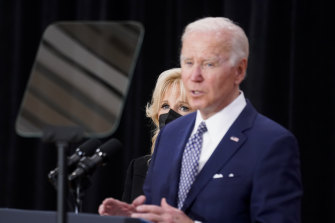 Calling out white supremacy as ‘poison’: US President Joe Biden.Credit:AP

The president and the first lady spent part of the morning visiting the Tops supermarket site, laying flowers under a tree that has become a makeshift memorial, before meeting with the victims families at the Delavan Grider Community Centre.

Members of the audience were moved to tears as Biden shared some of their victims’ stories during his speech: how Celestine Chaney was in the store to buy strawberries to make a shortcake, how Roberta Drury had been helping her brother who had a bone marrow transplant; how former police officer Aaron Salter was a hometown hero.

But it was his comments on white supremacy that drew the most applause – and perhaps the most cause for cautious optimism.

“Jill and I bring you this message from deep in our nation’s soul: In America, evil will not win, I promise you,” he said. “Hate will not prevail. And white supremacy will not have the last word.”