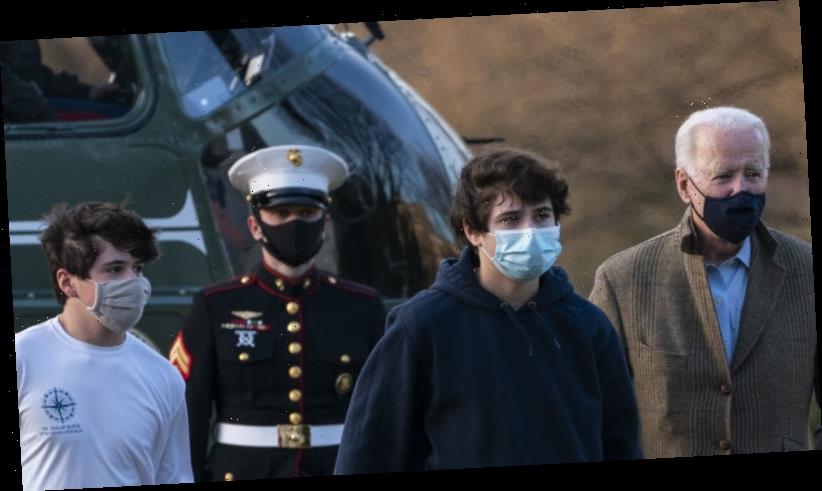 Washington: US President Joe Biden kicked off the White House’s effort to highlight the benefits of his huge COVID relief plan on Monday (Tuesday AEDT), declaring that “hope is here in real and tangible ways” as his administration began fanning out across the country to promote the new spending.

Biden, Vice-President Kamala Harris and their spouses have begun an ambitious, cross-country tour this week to promote the $US1.9 trillion plan as a way to battle the coronavirus and boost the economy. 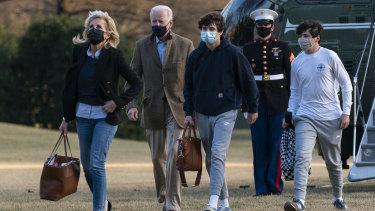 President Joe Biden and first lady Jill Biden with their grandchildren Hunter Biden, walk on the South Lawn upon arrival at the White House in Washington from a weekend trip to Wilmington, Delaware. Credit:AP

The road show — dubbed the “Help is here” tour by the White House — began on Monday with Harris heading to a COVID-19 vaccination site and a culinary academy in Las Vegas and first lady Jill Biden touring a New Jersey elementary school.

The President will hit the road later in the week — Pennsylvania on Tuesday, Georgia with Harris on Friday — but he stayed at the White House on Monday to declare that the bill will help put “shots in arms and money in pockets. That’s important.”

Hours earlier, Air Force Two lifted off from Joint Base Andrews and headed west to Nevada, and Harris will also make a stop the following day in Denver to meet with small-business owners. Wednesday sees Jill Biden in Concord, New Hampshire, and Harris’ husband, Doug Emhoff, in Albuquerque, New Mexico.

The stops at vaccination sites, businesses, schools and more are meant to educate the public about different aspects of the giant American Rescue Plan and how the administration says it will help people get to the other side of the coronavirus pandemic. 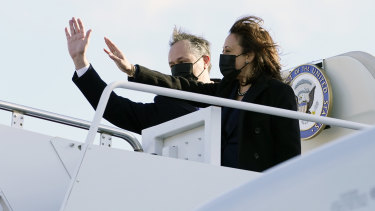 Vice-President Kamala Harris and her husband, Doug Emhoff, wave as they board Air Force Two at Andrews Air Force Base, Maryland. Credit:AP

Biden has said president Barack Obama’s administration, in which Biden was vice-president, failed to adequately educate the public about the benefits of its economic recovery plan. The President wants to do a better sales job this time around on the details of his first big legislative victory, and he began last week with high-profile speeches, one in prime time, the other from the Rose Garden.

Biden has chosen Gene Sperling, a longtime Democratic economic policy expert, to oversee the massive stimulus package, the role he himself had in 2009’s economic rescue package, to lead efforts “to stay on top of every dollar spent.”

“I learned from my experience implementing the Recovery Act just how important it is to have someone who can manage all the moving parts with efficiency, speed and integrity and accountability,” said the president.

Biden declared on Monday that within the next 10 days, his administration will clear two important benchmarks: distributing 100 million stimulus payments and administering 100 million vaccine doses since he took office. 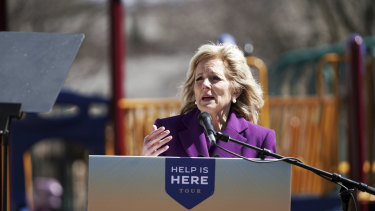 First lady Jill Biden speaks at a playground outside of the Samuel Smith Elementary School in Burlington, New Jersey.Credit:AP

The plan’s key features include direct payments of $US1400 ($1805) for most single taxpayers, or $US2800 for married couples filing jointly, plus $US1400 per dependent — for a total of $US5600 for a married couple with two children. The payments phase out for those with higher incomes.

Restaurants and bars that were forced to close or limit service can take advantage of a new multibillion-dollar grant program, and the plan also has tens of billions of dollars to help people who have fallen behind on rent and mortgage payments.

The bill cleared Congress without any backing from Republicans, despite polling that found broad public support. Republicans argued the bill was too expensive and included too many provisions not directly linked to the virus.

The “Help is here” tour is taking Harris on her first domestic trip as vice-president. Her husband, the nation’s first “second gentleman,” was breaking off for separate events in Las Vegas on Monday and New Mexico on Wednesday.

Since taking office, Harris has presided over swearing-in ceremonies for members of Biden’s Cabinet. She has stood with the President at his speeches, delivered remarks of her own, spoken by telephone with assorted world leaders and made appearances in the Washington area, including at funeral services for Washington power broker Vernon Jordan.

Harris also cast three tie-breaking votes in the 50-50 Senate in her role as president of the Senate.

The White House has detailed a theme for each day, focusing on small businesses, schools, evictions and direct checks. Jill Biden was joined by New Jersey Governor Phil Murphy on a tour on Monday of Samuel Smith Elementary School in Burlington, where she spoke about how the plan will help families and communities and highlighted steps the school took to reopen.

But her tour revealed the challenges ahead: In one classroom she visited, only two students were in attendance for in-person learning while the other 17 were virtual. Biden sat down at a computer to say hello to the remote learners.

“I just love being here at a school again: Educators, parents and students, the entire school has come together to bring kids back to the classroom,” she said. “But even with your best efforts, students can’t come, they can’t come in every day, which means that their parents are still having to take time off of work, or figure out childcare solutions. And this school like schools across this country can’t fully reopen without help.”

Emhoff, an entertainment lawyer, also has made a few appearances in the Washington area in between his stint teaching at Georgetown Law School. He planned to visit a food relief organisation Monday in Las Vegas and participate in a listening session with the organization’s partners.

In addition to the President, Vice-President and their spouses, Cabinet secretaries will also be out on the tour. Hundreds of mayors and governors, including Republicans, are being lined up to give interviews to discuss what the plan means for their communities.