TALIBAN thugs have attacked women and children with whips and sticks before firing their guns amid chaos at Kabul airport, reports claim.

At least half dozen were wounded, within the hour of violent escalation, including a mother and young son. 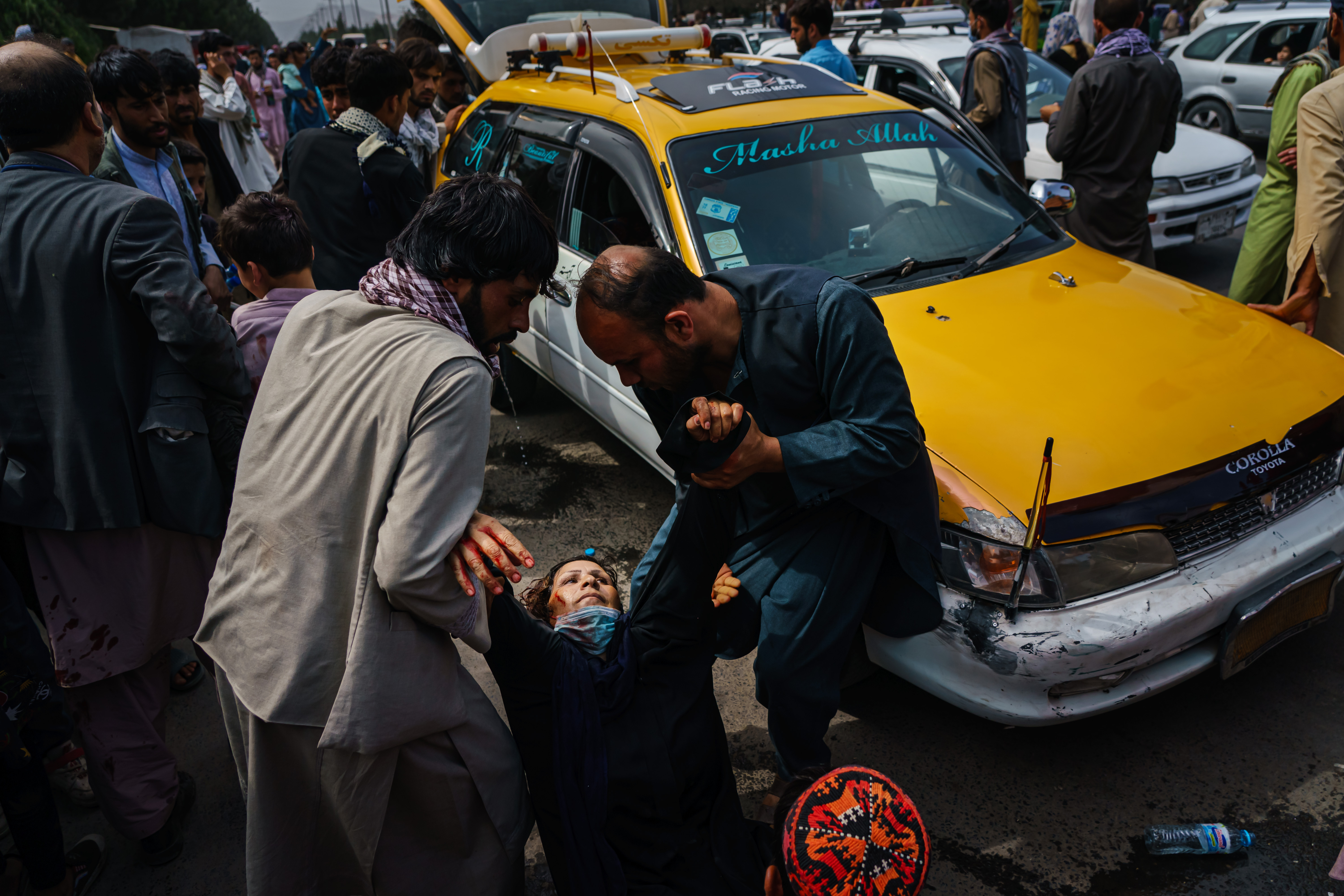 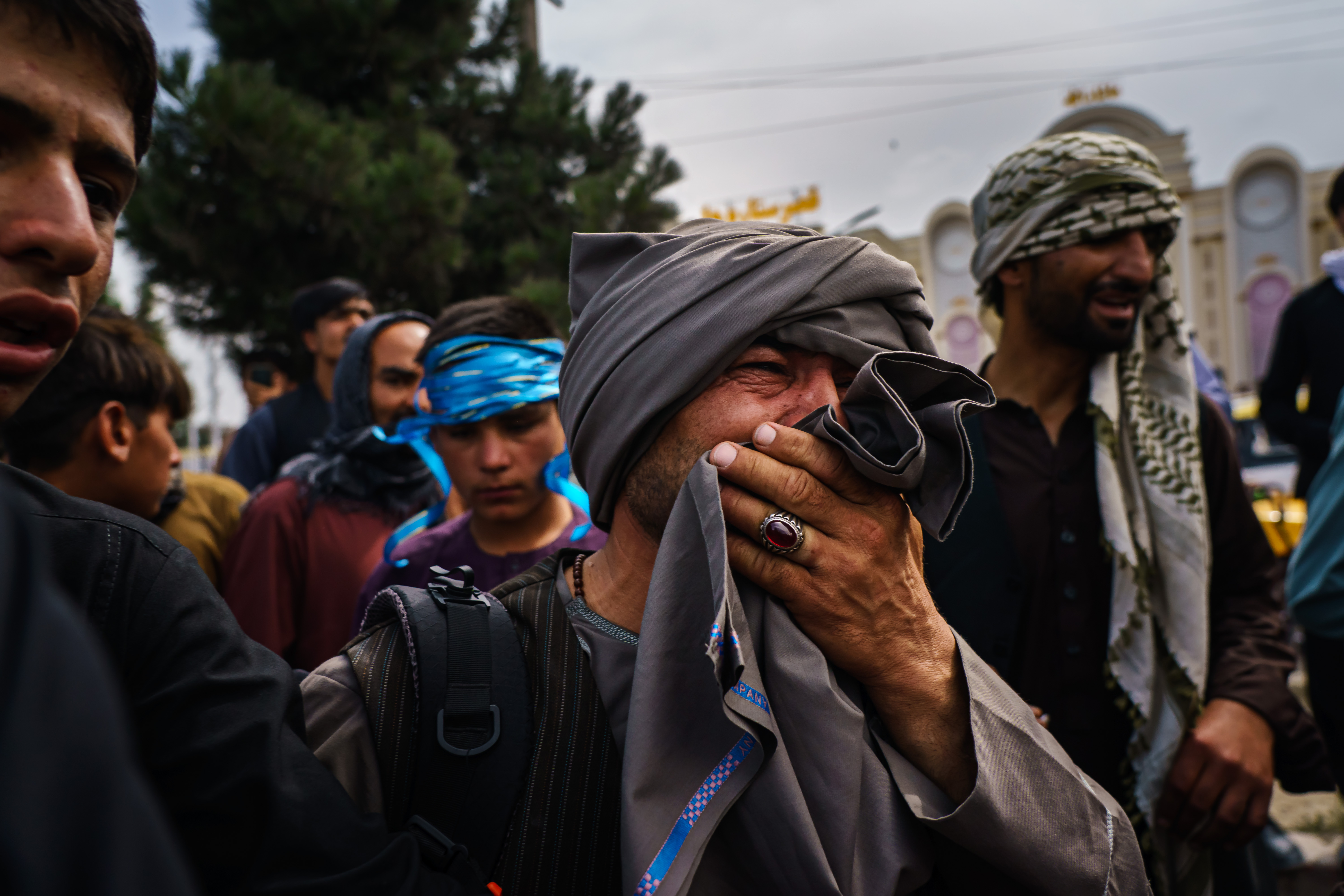 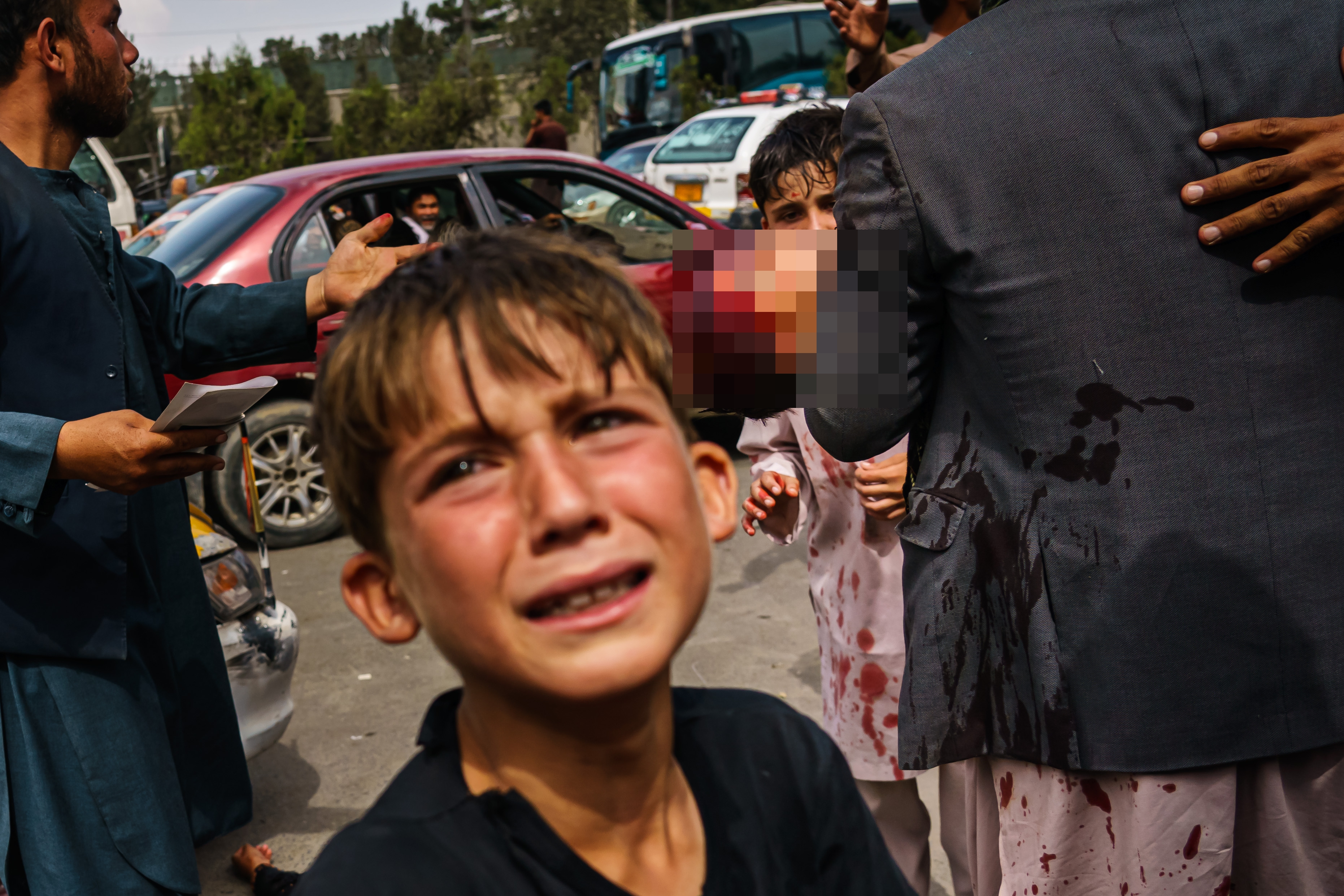 These shocking photos show the horror reality for Afghans who are trying to escape the Taliban-infested territory.

Thousands of citizens have been wait outside the Kabul Airport for a way out – but today Taliban forces used gun fire, whips, sticks and sharp objects to maintain the crowds.

One devastating snap shows a man carrying a bloodied child while another lad cries directly into the camera.

In another a woman lies on the street wounded while two men attempt to save her.

It comes as around 20,000 Afghans will be flown to Britain to escape the Taliban in one of the biggest resettlements in our history.

The PM will today vow to rescue women and girls in particular from the clutches of the fanatics.

He will vow to honour the “debt” the country owes the Afghan people by rescuing the most vulnerable.

The programme — one of the biggest of its kind in British history — will focus on giving asylum to women, girls and religious minorities fleeing persecution.

It will run for five years, with 5,000 Afghans offered asylum this year alone. 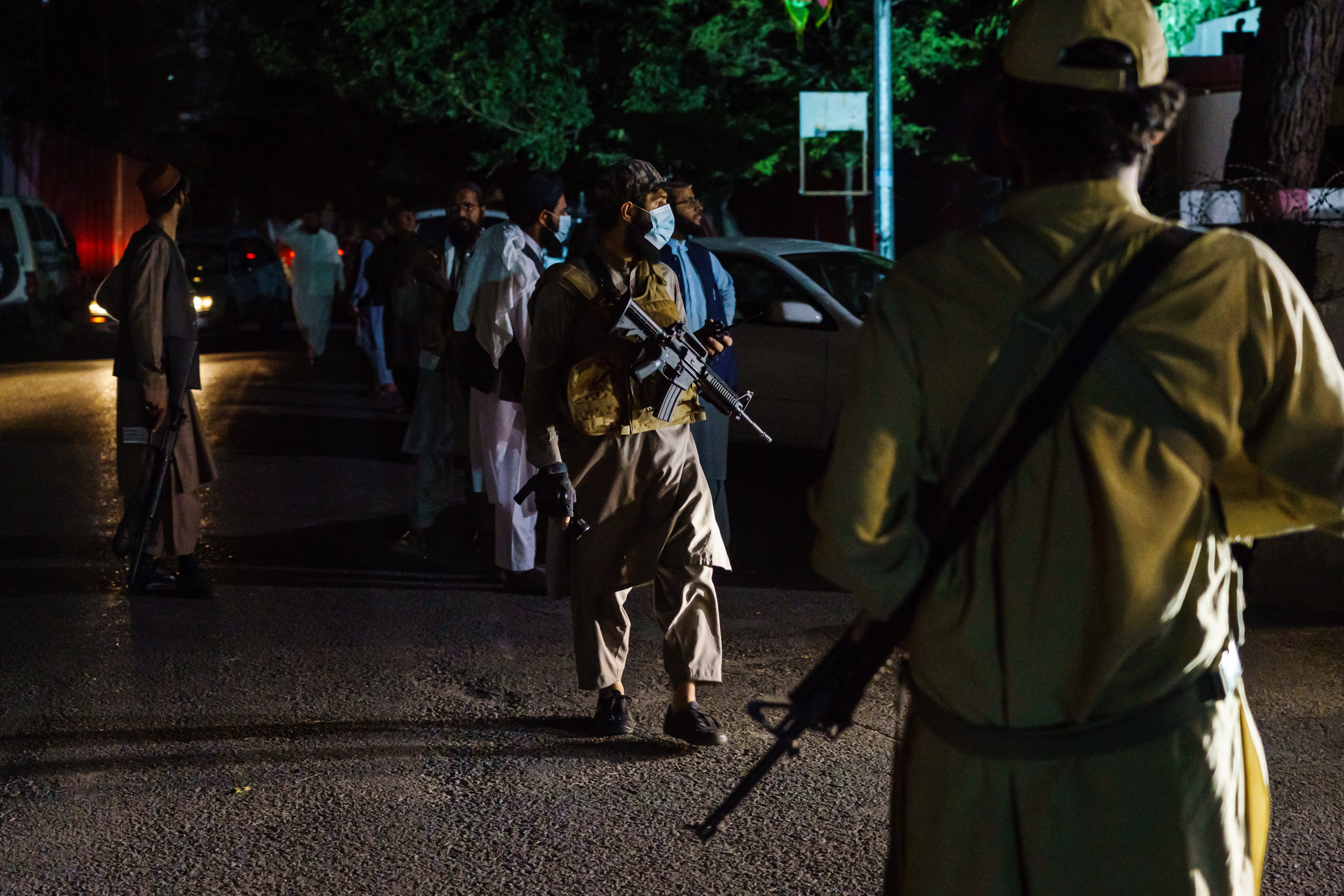 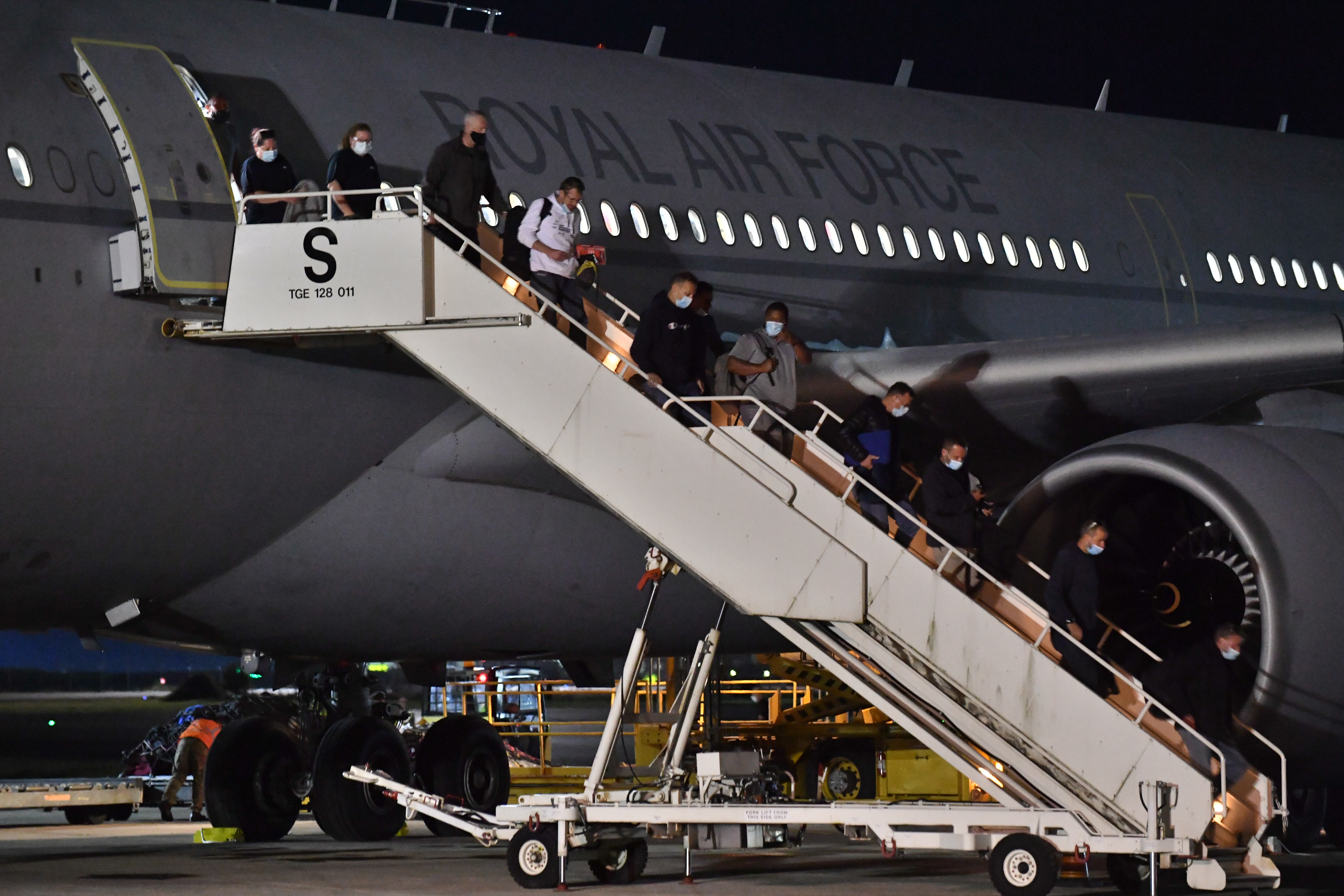 It comes on top of the existing ARAP scheme, which will give asylum to 5,000 interpreters and other Afghans who worked with Britain over the past 20 years.

And last night an RAF Voyager carrying the first Afghans cleared to come to the UK touched down at Brize Norton.

Yesterday a taliban leader declared their victory a “proud moment for the nation” and vowed to impose Sharia law on Afghanistan.

Zabihullah Mujahid appeared in public for the first time after 20 years in the shadows after the fanatics' stunning success in defeating the government.

Mujahid said the Taliban “are committed to the rights of women” but added that would be “under the system of Sharia".

Many had doubted he even existed but in an extraordinary moment he took to the stage to say "after 20 years of struggle we have emancipated our country and expelled foreigners".

"This is a proud moment for the whole nation," he said.

The Taliban are now tightening their grip on power following their lightning victory that has shocked the world.

While Sharia simply refers to laws that are derived from Islam, in practice the Taliban have an extreme interpretation of what this means in practice.

They have forbidden women from leaving the house alone without an adult male relative and for them to work or be educated.

Already there have been reports of the houses of prominent women being marked and many have spoken about their fear about what the future holds under the Taliban.