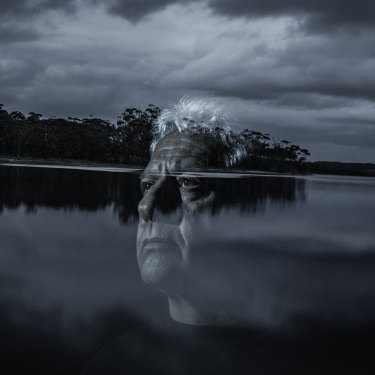 Gunai man Wayne Thorpe on Country at Lake Tyers in East Gippsland. He tells the story of his ancestor Boonjil Noorook who first saw the Endeavour and Captain Cook sailing towards Gunai country.Credit:Justin McManus

Early one morning, a young fella named Boonjil Noorook was out spearing seals to get some ngulli [meat] for his family when he heard a big noise out in the ocean. Boom, boom, boom. Before long he spotted something strange, what looked like a big canoe with white wings on it coming in towards the coast.

Well, that was the Endeavour with Lieutenant Cook, later known as Captain Cook. This is when the Endeavour was coming from New Zealand and they were heading straight for Gunai country, the south-eastern parts of Australia, and doing the soundings with the ship’s cannon.

Boonjil Noorook spotted them out there and it looked like trouble. He went back to his elders and told them about it, what he’d seen. They said to him, “Send a smoke signal and a song and forewarn all the people up along the coast.” The south-westerlies were blowing fairly strong and the Endeavour was turning up along the east coast.

So, this is a story about Boonjil Noorook discovering Cook.

Boonjil Noorook sent off the smoke signals to communicate with all the different mobs up along the coast. Our people were communicating and sharing information with our family and friends, our neighbours, our alliance groups, to forewarn them about something out there that looked like danger.

Since the first sighting of the Endeavour coming, there were messages sent to other peoples. It was a form of resistance, of looking after our country, forewarning the people that it could be danger: “Keep an eye on them people out there, whoever that is out there.”

Each group would relay their own song and story within the smoke they sent. It was a form of awareness and therefore resistance to what was coming, especially up around Gulaga, what Cook called Mount Dromedary, the place near Wallaga Lake.

As the ship went up further along the east coast, these become fires. In Joseph Banks’ journals and in Cook’s journals they both write about the sighting of land and various landmarks and where the locations were, and where they sighted these smoke signals and fires.

I’m told that when they went out around Barunguba (Montague Island), the mob sent smoke signals. But then when the Endeavour came back, the mob lit big fires. From there, that’s when you see a series of fires up along the coast. That message also got relayed, “You keep away from here. This is not welcoming smoke here.” And in fact, Cook even wrote that in his journals. So he got the message, he got the feeling. The people are resisting them coming on shore. 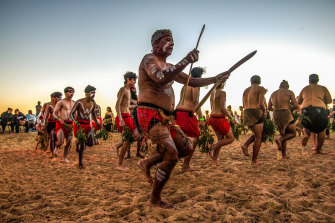 When they got to Kamay Country, what they call Botany Bay now, and the Gweagal people were on the shore, well, Cook and his men started firing shots. They were under orders not to do that, so they broke the law in that sense. They broke their own law and their orders from their king.

And they broke our law.

It’s important for people to realise there are two points of view here. Two laws were at play, and there still are. We never ceded any sovereignty and there’s been no agreement. And there still hasn’t been a treaty. So we are looking at ways of resolving some of these situations. We’re always looking for solutions because we need to be better looked after and treated better on our own country.

“We need to have our own debrief and then make informed decisions. There’s a bit of consensus then, and that’s a tribal way.”

I remember reading about and hearing a lot of stories from our elders, who talked about the connection with the different clan countries up along the coast, and even inland from the start of the Snowy River, and how they’d come down the Snowy to Cape Conran.

Now there might be a whale that’s beached itself, so they’d call on the different peoples to come. They did not just use smoke signals for Captain Cook out there, but also to say “come and cook the feed, there’s a beached whale, come and share the food”. Then there’d be the bogong moth season when we travelled up and met together again.

There weren’t these hard perimeters like they want for Native Title that cause so much tension and grief in our communities today.

There were alliances formed with the different tribal groups around the east coast part and over the mountains right up to country on the Murray River.

But there were also stories about how we didn’t get on so well with the west side of Gunai Country. It was over swan egging rights and it was a seasonal thing. For instance, down Yiruk – at Wilson’s Prom – well, that’s a shared place for food at seasonal times. You see? When that food resource season’s finished, well, season’s finished, time to go home. So people did, but then there were some people who came back, stealing the last couple of eggs. That caused fights.

When it kept happening there was a fight, then payback – a hard sort of fighting. And at a point in time, then we became enemies. But before that we were in alliance, some sort of agreement, you see. 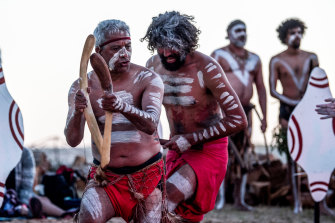 The boundaries between clans, tribes and groups are not always as clear as the Native Title Act would like, says Wayne Thorpe.Credit:Justin McManus

And so when Native Title started asking us, “Where’s your boundaries, where’s the line that cut you off from that one?” I thought, well, from my awareness, there’s no single, hard line. Now with the eastern part of the country, we had great alliances, and it’s even in the language that it’s Gwan-Dhang, which is rough throat speech, mixed speech, and a dialect of Maak-Dhang, the overall language continuum.

Now the language is mixed because there’s a lot of trade. There’s a lot of interaction between the groups from that area. Even the dialect indicates that.

But it seems like Native Title was designed to separate and divide again, to weaken. You weaken the alliances, then people are standing alone.

I think what the people need before the [Yoo-rrook Justice] Commission comes to Bung Yarnda (Lake Tyers) is the opportunity to speak among ourselves. What do we want? When do we want it? What have we got? We can ask one another this. Because we’ve been blinded by the white all the time. You see? And they’re in our faces. It’s in our faces.

It might take a couple of visits before we talk. We need to have our own debrief and then make informed decisions after that. There’s a bit of consensus happening then, and that’s a tribal way.

We need an opportunity to speak within ourselves, to establish ourselves, so we are talking in the same direction. Because we’ve had an informed discussion with our elders, with our peoples who will talk in these meetings, but also won’t talk up properly in these meetings. You see? So we need to organise ourselves in our structures.

Another important thing is that Truth-telling is supposed to be about both sides telling the truth. Right? That doesn’t happen, and I noticed it with reconciliation. When they first talk about reconciliation, it’s always, “Oh, come on all your blackfellas, tell us about your story. And will you dance for us too? And will you do this for us too?”

Well, wait on. What are you fullas going to do?

Uncle Wayne Thorpe is a Gunai man on Krowathunkooloong Country in Bung Yarnda (Lake Tyers). He was talking to Jack Latimore.