The ACT government is probing how Pfizer vaccine doses reserved for specified critical and high-risk workers were provided to ineligible Canberrans after the number of a dedicated vaccine registration hotline was widely distributed at the weekend.

A medical centre established to vaccinate people in the first two phases of the national rollout was inundated with bookings after a phone number reserved for frontline workers was shared in an unauthorised message via text and social media groups. 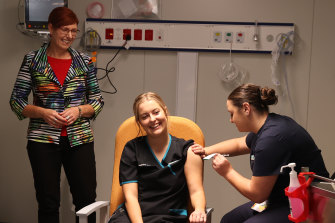 ACT Health Minister Rachel Stephen-Smith accused those who received the vaccine despite knowing they were ineligible of skipping the queue, saying their actions were “unhelpful”, “inappropriate” and “unnecessary”.

Health authorities also stressed that vaccine doses were not going to waste and only on occasion were specialised clinics offering vaccinations to ineligible residents, such as carers or those accompanying the patient to the vaccination clinic.

One text message circulated, seen by this masthead, says: “heya super weird message but garran surge centre has an excess of pfizer this weekend and are offering them to the general public.

“Below are the details if you’re keen to get jabbed Pfizer is pretty much guaranteed this weekend as we are low on booking and prioritizing this vaccine. Don’t need to meet criteria for 1A or 1B just call … ignore the recorded messages.” 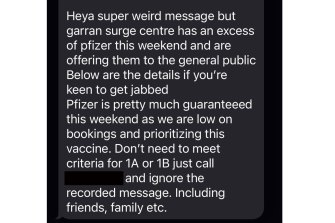 The unauthorised message that was circulating in Canberra over the Anzac Day long weekend.

Among those to have received the vaccine on Monday was a senior ABC journalist, Jane Norman, who alerted her followers on social media platform Twitter that “word got around” there were Pfizer supplies available and “not enough people booking”.

“So I called the vaccine hotline, told them I was not currently eligible and they booked me in last night,” she tweeted.

In a separate tweet she wrote: “I’m not in 1A or 1B so I’m very grateful and can confirm the booking + #COVID19 vaccination process went smoothly!”

“If you are not in one of these groups, please use the Commonwealth government’s COVID-19 Vaccine Eligibility Checker or speak to your GP to find out how, when and where you can book an appointment,” the recording says.

The national COVID-19 vaccination rollout has been hit by a number of controversies, including export bans from Europe and recommending against the AstraZeneca vaccine for under-50s. The rollout remains two million vaccinations behind where it had originally planned to be four weeks ago.

A senior government source said those who registered at the ACT clinic were not vetted at the centre for their eligibility because the phone number they had used was only given out to those identified as a priority and vaccinations were not yet open to the general public.

Ms Stephen-Smith said it had been “clear the whole way through” the current phase of the vaccine rollout was only for those identified as a priority.

“It was really unfortunate there was clearly a text message circulating among groups of people who were told that they should call the COVID-19 line and they could get an appointment,” Ms Stephen-Smith said.

“We have seen appointments that have been falling and clearly staff were being generous in their interpretation of who could access the surge centre for Pfizer vaccination. It has been reinforced this morning that they really do need to ensure that people are eligible for vaccination before they book them in.”

Authorities are now investigating how the clinic’s hotline number, which was provided only to those eligible, was widely shared and are reviewing vaccination booking procedures.

ACT Health was unable to estimate how many people who received the vaccine were not eligible.