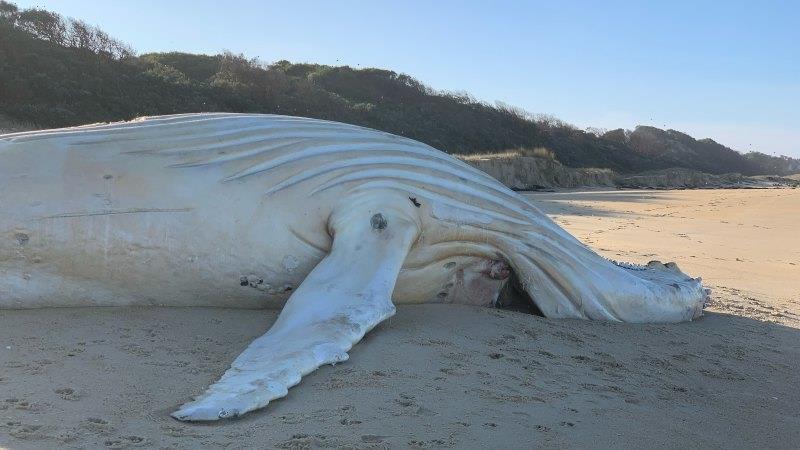 Is it Migaloo? White whale washes up on remote Victorian beach

A white whale carcass has washed up on a remote beach on Victoria’s far eastern coastline sparking fears it could be the famous albino whale Migaloo, which hasn’t been spotted in Australian waters for two years.

Images shared by beachgoers online show the large carcass on a beach near the popular tourist town of Mallacoota. The carcass appears to be mostly intact and white in colour. 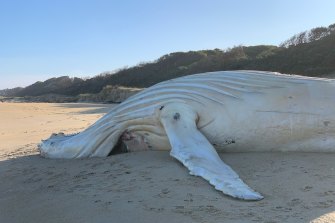 The white whale carcass which washed up near Mallacoota this week.Credit:Tyler Hing

A spokesman for the Department of Environment, Land, Water, and Planning confirmed a carcass suspected to be that of a humpback whale had washed ashore and reminded beachgoers it was an offence to interfere with the remains, which were discovered by abalone fishermen.

Dr Vanessa Pirotta, a marine scientist with Macquarie University, said a pod of whales Migaloo had been spotted swimming with in the past had recently been sighted off Port Macquarie. However, she warned it was too early to know for certain whether the stranded whale in Mallacoota was the world-famous albino humpback.

“Obviously, when anyone says a white whale is washed up on the beach, people will immediately think it’s Migaloo,” she said. “But it is really important to caution that at this stage we don’t yet know who this individual is.” 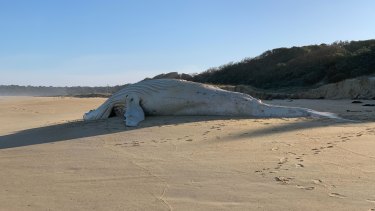 The whale carcass on the remote beach near Mallacoota.Credit:Tyler Hing

Pirotta said other rare albino whales had been known to swim up and down the Australian coastline. Saltwater can also weather the skin of whales when they die at sea, turning it a whitish colour by the time they wash up along the coast.

Migaloo, whose name means “white fella” in several Indigenous languages, is believed to have been born in 1986 and was first spotted in 1991 off the coast of Byron Bay. But the last sighting of Migaloo, aged in his mid-30s, off Australia was in June 2020.

Pirotta said the best way to identify the whale would be to look at the ridges on its tail and carry out genetic analysis of the carcass and compare it to samples taken from Migaloo. Scientists can then opt to undertake a whale necropsy, an animal autopsy to determine the cause of death.

“If a necropsy can be undertaken, this is a huge contribution to science,” she said “Scientists will be able to take data, sample collection, learn more about why this animal has passed which might infer information about our marine environment.”

Pirotta said that could point to the presence of pollutants on the water, underlying health problems, or the impact of human activity in the area and highlight potential risks to marine life.

However, the remoteness of the location of the carcass could pose a challenge for officers and researchers seeking to collect samples or transport the remains.

The discovery comes during Australia’s whale season when large numbers of humpback whales migrate from waters around Antarctica to the Great Barrier Reef.

Pirotta said whale stranding was largely uncommon, but it was not an unusual occurrence during migration season, due to the sheer number of whales travelling up and down the coast.

Matt Tebbutt red-faced over outfit choice chat with BBC host Not a conversation for TV!