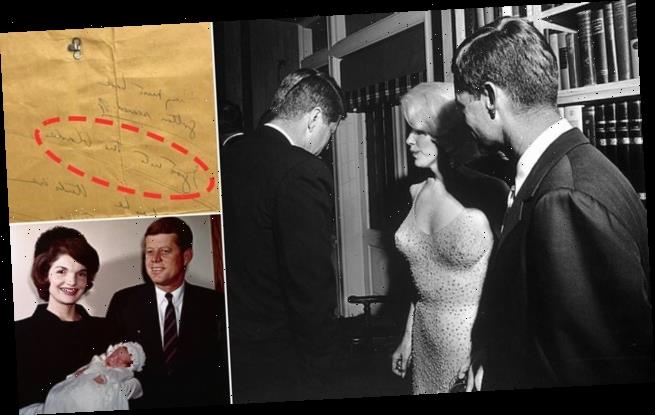 JFK's taste in women revealed in notes to aides from 1960

‘I got in to the blondes’: JFK’s sexual preferences – and his fear of being exposed as an adulterer – are revealed in notes he wrote to aides after losing his voice on 1960 election trail

Remarkable no-holds barred notes by JFK have revealed his sexual preferences and his fears about being outed as an adulterer in 1960.

The 98 pages of notes were made throughout 1960 as John F. Kennedy was in the midst of a fiery presidential campaign.

Kennedy wrote down his thoughts to communicate with aides when he lost his voice on the election trail. 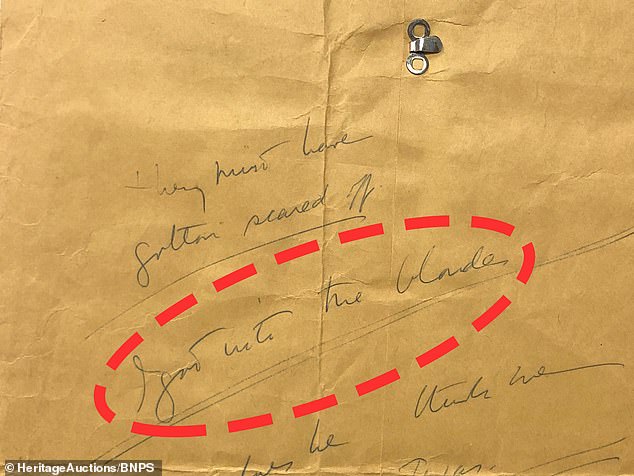 Kennedy, who married his dark haired wife Jackie in 1953, scribbled down: ‘I got into the blondes’, when he lost his voice on the election trail in 1960 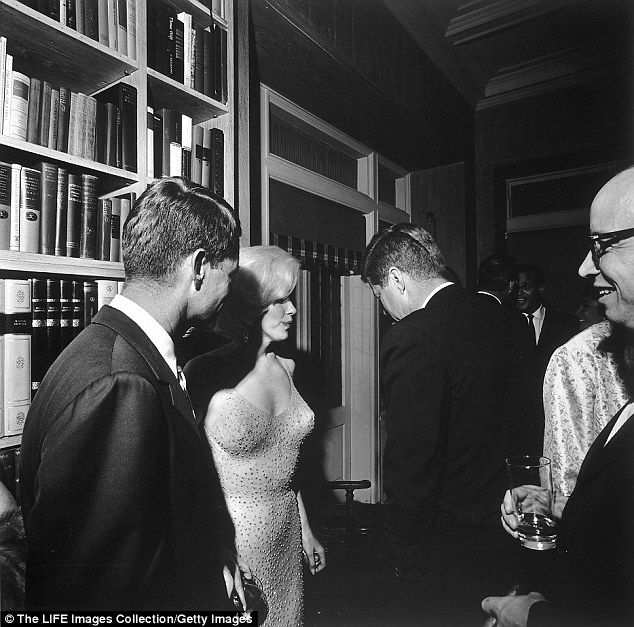 Marilyn Monroe is pictured flanked by the two Kennedy brothers, with Robert on the left and John on the right at a party in 1962

‘I suppose that if I win my poon (an old naval term for sex) days are over.’ He added in another note in 1960. ‘I suppose they are going to hit me with something before we are finished’

Most researchers agree that Marilyn Monroe and JFK had slept together before she performed at his birthday address in 1962.

In late March 1962, it’s thought they spent the night together after a party in Palm Springs.

On May 19, Marilyn was sewn into a special outfit for her legendary performance.

She launched a breathy, sexually charged rendition of ‘Happy Birthday’, cheered on by the audience.

Most researchers believe that this turned out to be the last interaction in their affair.

In one note, he confided that his love of blonde women could come back to haunt him if it became common knowledge ahead of the vote.

In another note, thought to date from October 1960, when asked about potential post-election holiday plans, he wrote: ‘If I win maybe Florida or Puerto Rico. If I lose around the world in 180 days.

‘I suppose that if I win my poon (an old naval term for sex) days are over.’

He then expresses his fear about this becoming public: ‘I suppose they are going to hit me with something before we are finished.’

On the reverse is another sexual reference. JFK, who married his brunette wife Jackie in 1953, scribbled down: ‘I got into the blondes.’

His love of blonde women clearly didn’t desert him after becoming president as he reportedly had an affair with film icon Marilyn Monroe. 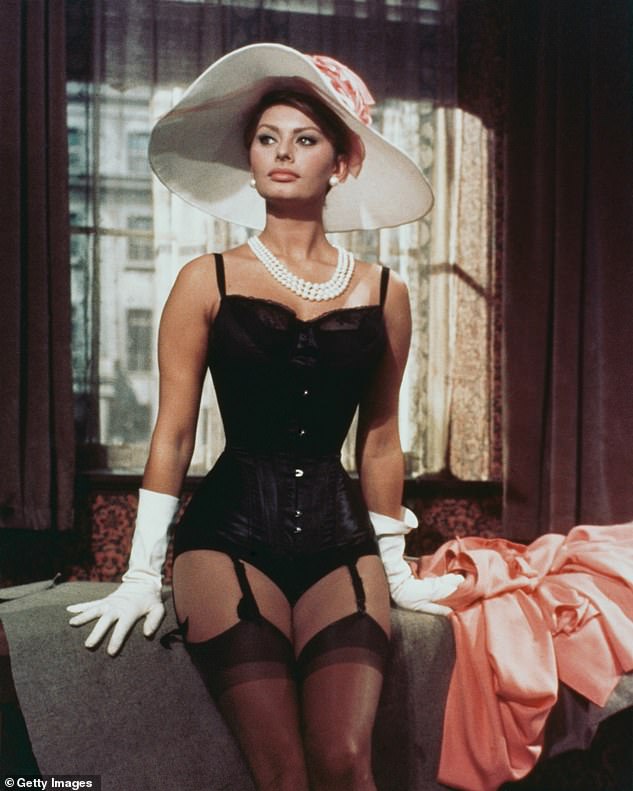 A book published in 2018 revealed the long list of John F. Kennedy’s lovers. One star is said to have not fallen for Kennedy’s charm was actress Sophia Loren, who the president allegedly asked out twice to no avail 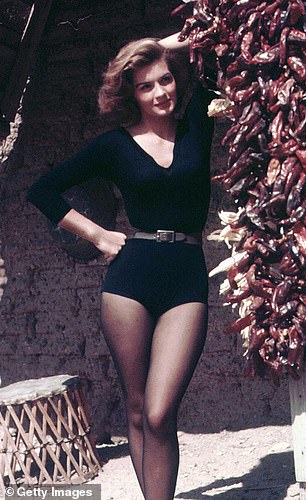 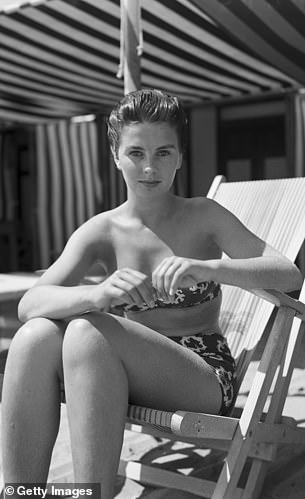 Actress Angie Dickinson (left) known for her role as Beatrice in 1960 film Ocean’s Eleven, described sex with Kennedy as the most ‘exciting seven minutes’ of her life. British actress Jean Simmons (right) claimed the former president  ‘practically broke down’ her hotel room door to demand sex with her in 1958

It was Kennedy’s affair with Marilyn Monroe – his most famous mistress – that most worried wife Jackie, who feared he would be impeached for his bad judgment if it was exposed.

Decades after his assassination, new revelations continue to surface about his lovers who include actresses Anita Ekberg, Gene Tierney, and Marlene Dietrich, and White House intern Mimi Alford, as well as two White House secretaries.

Kennedy’s other affairs included British-born actress Jean Simmons who said that he ‘practically broke down’ her hotel room door to demand sex with her.

Angie Dickinson, who starred in the original Ocean’s 11 in the 1960s, called sex with Kennedy, ‘the most exciting seven minutes of my life.’

One White House secretary, Mary Gallagher, told Andersen that she recalled seeing Hepburn come in to see Kennedy when he was a young senator.

‘I remember Audrey Hepburn and I remember how the whole office was impressed when she walked in. She was as graceful as a swan and carried a long, slim red umbrella,’ she said.

At the time Hepburn had just won an Oscar for Roman Holiday and was about to start filming Sabrina with Humphrey Bogart.

Andersen writes that she ‘out-Jackied Jackie’ with how she presented herself.

Kennedy’s other targets allegedly included Hamlet star Simmons who was filming 1958 film Home Before Dark in Boston when he tried to barge into her hotel room but she rebuffed him.

Lee Remick, the blond star of Days of Wine and Roses, also had a fling with him when she was 22, six years younger than Jackie.

Remick was described as ‘drop dead gorgeous’ and the ‘epitome of class and intelligence’, Andersen writes.

Angie Dickinson described Kennedy as ‘the killer type, a devastatingly handsome, charming man – the kind of man your mother hoped you wouldn’t marry.’

Her assessment of sex with the former president: ‘It was the most exciting seven minutes of my life.’

But not everyone fell for Kennedy’s charm, including legendary actress Sophia Loren, who at the time was 24 and had just refused a marriage proposal from actor Cary Grant, her co-star on the film Houseboat.

Instead she intended to marry the film’s producer Carlo Ponti.

As well as his adulterous side the notes also provide a fascinating insight into his volatile state of mind as the pressure ratcheted up in the contest.

He often used foul language unbecoming to his polished image while insulting his opponents and members of the press, calling one of them a b*****d.

He wrote of his colleague ‘did you hear me stick it up Myles a*s today’.

In other musings, Kennedy delivers a withering critique of his competitors including Minnesota senator Hubert Humphrey who he describes as ‘bitter’.

Fearful of Humphrey’s debating skills, he observes that ‘we shouldn’t have this (debate) before a live audience’.

The notes reveal Kennedy was aware of the importance of the ‘racial issue’ in America and how crucial it could be to his election chances.

On one occasion, he wrote: ‘Should I bring in the racial issue. I had planned to speak about Civil Rights earlier in the day.’

JFK was stuck down by laryngitis on the campaign trail and was instructed by his doctor and speech coach not to speak while travelling.

An assistant by the name of Janet DesRosiers was tasked with making sure that he didn’t speak.

The notes, made on yellow legal pads, have been owned by many years by a private collector.

They have emerged for sale with Heritage Auctions, of Dallas, Texas, where they are expected to fetch $20,000.

Curtis Linder, specialist at Heritage, said: ‘A woman by the name of Janet Des Rosiers, who had been Joe Kennedy’s long-time mistress and personal assistant and who was now traveling on Kennedy’s plane, was tasked with making sure that he didn’t speak.

‘She kept him supplied with legal pads so he could communicate with those around him and still keep enough of his voice to make speeches and talk to reporters.

‘JFK was a prolific doodler and these notes give a fascinating insight into his state of mind during the vigorous campaign.

‘Some of the language and content of these notes would certainly have shocked many members of the electorate of that day.

‘He would certainly not have wanted his note about liking blondes to go public!

‘There was always debate about whether he was having affairs with Marilyn Monroe and interns at the White House.

‘This archive deserves to be prized for the historical treasure it is, as it is highly unlikely that original material offering such an insight into the landmark 1960 election will be offered again.’ 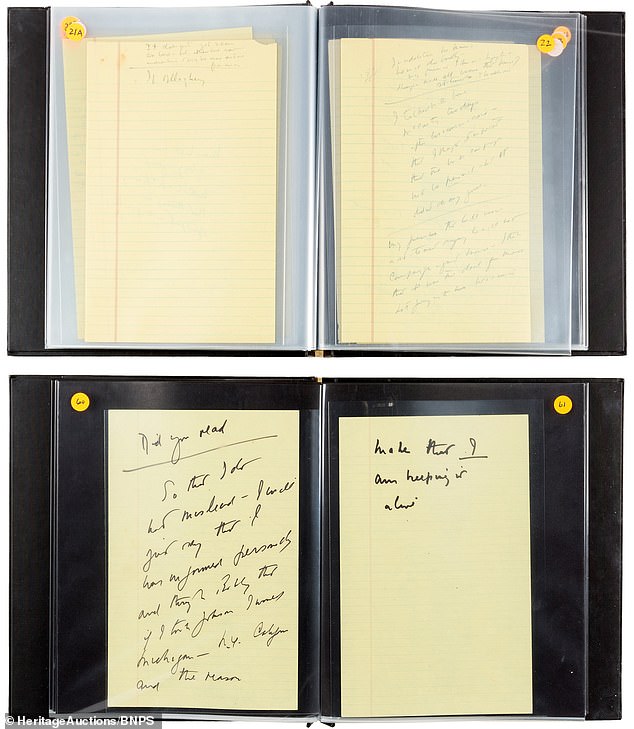 The remarkable no holds barred notes penned by JFK have emerged for sale with Heritage Auctions, of Dallas, Texas, where they are expected to fetch $20,000 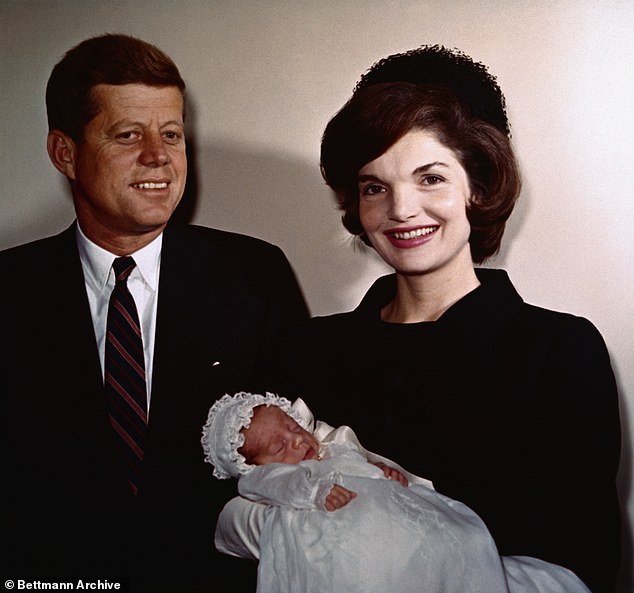 President John F. Kennedy with wife Jackie who is holding their son, John Jr., during his christening 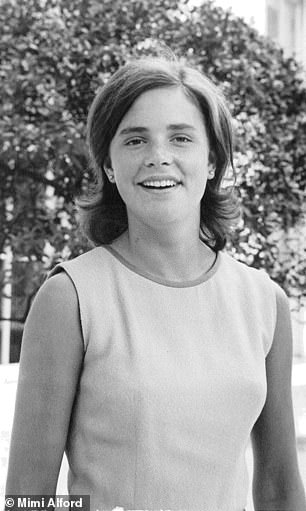 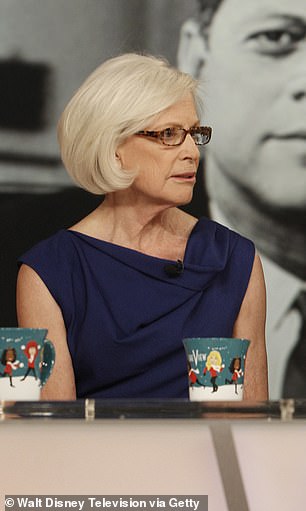 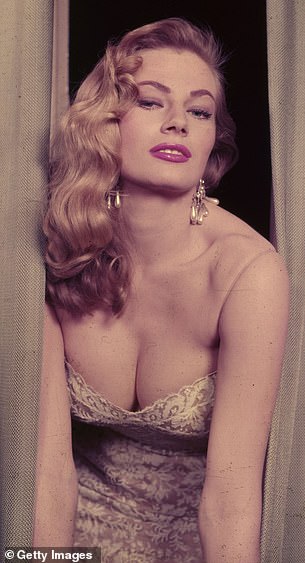 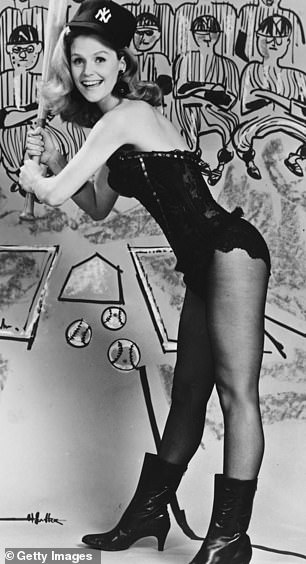 Decades after his death, new revelations continue to surface about Kennedy’s lovers who include Swedish actress Anita Ekberg (left) and Days of Wine and Roses star Lee Remick (right) who had a fling with him when she was only 22

Singer-songwriter Carly Simon revealed last year that Jackie was very much aware of her husband’s infidelities.

Simon spoke about President John F Kennedy and Aristotle Onasis’ extramarital relationships in an interview with NBC News, and how they affected her good friend.

‘In a cheerful but resigned way, she told me that of course she knew about them,’ the You’re So Vain singer wrote in her book, Touched By the Sun: My Friendship with Jackie.

‘She just didn’t mind their presence as much as she might have. Because she knew he [Kennedy] loved her much, much more than any of his dalliances.’

‘For instance, his not being there for the birth of a child, his being off with a mistress while she was in the hospital,’ said Simon of President Kennedy being absent for the birth of one of his children.

‘There are various things that he did that by comparison to having a mistress must have hurt more.’

President Kennedy was present for the birth of his two sons, John jr and Patrick, as well as daughter Caroline.

He was not present however when Jackie delivered a stillborn daughter in 1956, and as was reported at the time was instead on a yacht with friends – and his alleged mistress.