JobMuddle: Why didn’t we just bring back JobKeeper?

JobKeeper then JobSeeker, JobMaker, JobTrainer and now JobSaver … Scott Morrison’s coronavirus programs are starting to look like the most aggressive brand extension since Apple tried to trademark the letter ‘i’ in 2010.

But for businesses scrambling to keep their heads above water amid the lockdowns, the ever-changing systems are creating confusion and delay. 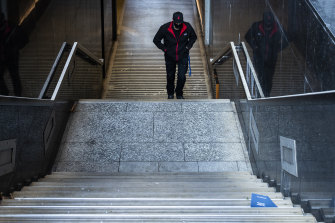 Locked down and locked out of business … JobKeeper could have had a second coming.Credit:Louie Douvis

Many NSW businesses in particular are struggling to understand a new support system that changes every week and takes a long time for cash to arrive. Business owners and many employees are all asking the same question: why didn’t we just bring back JobKeeper?

Reason No. 1 is lack of planning. Australia didn’t have a clear plan to support business through subsequent shutdowns after JobKeeper ended in March 2021. That was despite the multiple waves of COVID-19 we saw in many countries around the world and the obvious vulnerability of our slow vaccination rollout.

Reason No. 2 is short-sightedness. Early in the Sydney outbreak the federal government insisted that reintroducing JobKeeper wasn’t necessary. But why rule out an option before you know whether it’s needed? It was unwise not to have a plan, but irresponsible to take the most obvious option off the table.

As soon as the Prime Minister ruled out JobKeeper, other policies were needed to fill the vacuum. First the NSW government cobbled together a short-term solution involving small cash grants and payroll tax deferrals. Then, when the Commonwealth could no longer reasonably ignore the state’s pain, they created a new JobSaver program, whose first version was entirely inadequate.

Once it became clear last week that NSW was a full-blown disaster and something of the scale of JobKeeper was needed, it was impossible to bring it back. NSW and the Commonwealth couldn’t retract their other payments, which meant it would be too much to have JobKeeper over the top.

So they tinkered with JobSaver instead, putting in a raft of changes on July 28 to lift the turnover threshold from $50 million to $250 million and increasing the maximum payment from $10,000 to $100,000.

By this stage small business heads were spinning and their bank accounts were emptying.

Instead of a clean and simple plan that everyone was used to, we now have a new system featuring multiple programs, more complexity and slower payments.

How did we end up in this JobMuddle? And why was the Commonwealth so hesitant to bring back JobKeeper?

The reason is that, despite its popularity, JobKeeper had a number of flaws.

First, it included a lot of waste.

According to Parliament’s budget watchdog, an estimated $25 billion was paid through JobKeeper to firms that did not see their revenue fall as much as expected. That’s an amazing number. That means more money was wasted on JobKeeper than the Commonwealth spends each year on schools.

Second, even for the firms that did see their revenue fall significantly, much of the JobKeeper payment wasn’t necessary.

Research by the Reserve Bank of Australia suggests JobKeeper “saved” 700,000 jobs last year out of 3.5 million workers who received the pay subsidies via their employers.

This implies that the employers of some 2.8 million workers (75 per cent of the workers covered) may have received the windfall unnecessarily. The ‘one in all in’ rule meant that every employee of a company was subsidised by JobKeeper – even though only some of the jobs in each company were at risk.

The third element of waste was overpayments.

JobKeeper gave $1500 per fortnight to everyone, even if they didn’t normally earn that much. Nearly 10 per cent of workers on JobKeeper were earning less than that, so taxpayers were effectively giving them a pay rise.

Young people were the most likely to get a JobKeeper pay rise. Between mid‐March and late‐June, the number of jobs for Australians aged under 20 fell by 5.2 per cent, yet the wages paid to this group increased by 11.6 per cent. This suggests that the average young worker received about 20 per cent more than usual.

After adjusting for population size, Britain’s equivalent of JobKeeper cost $37 billion compared to Australia’s $90 billion over the same period. That means the British program cost less than half as much despite the virus outbreak being more severe and having much larger economic consequences.

The upshot is that JobKeeper was incredibly effective, but not very efficient. Only about 16 per cent of the money went to directly subsidising jobs that would have been lost.

It’s hard to be too critical of the Commonwealth for the flaws in JobKeeper early on in the pandemic. The program was put together with incredible speed. And it’s impossible to perfectly target any government program – a goal of zero waste is unrealistic.

The Prime Minister, the Treasurer and the Treasury deserve credit for rapidly pulling together a program that worked.

What is harder to understand is why JobKeeper hasn’t been improved over time. Why didn’t we use the year that’s passed since its launch to learn from its strengths and weaknesses? Why didn’t we have a renovated version of the program ready to support businesses as soon as another lockdown was forced on us?

There is so much uncertainty in this pandemic. We should be light on criticism when good policies like JobKeeper aren’t perfect. But we should also demand that we learn from mistakes, iterate quickly and stay on top of future risks. If we had done that on JobKeeper, the small businesses bearing the brunt of this shutdown wouldn’t be in such a muddle.