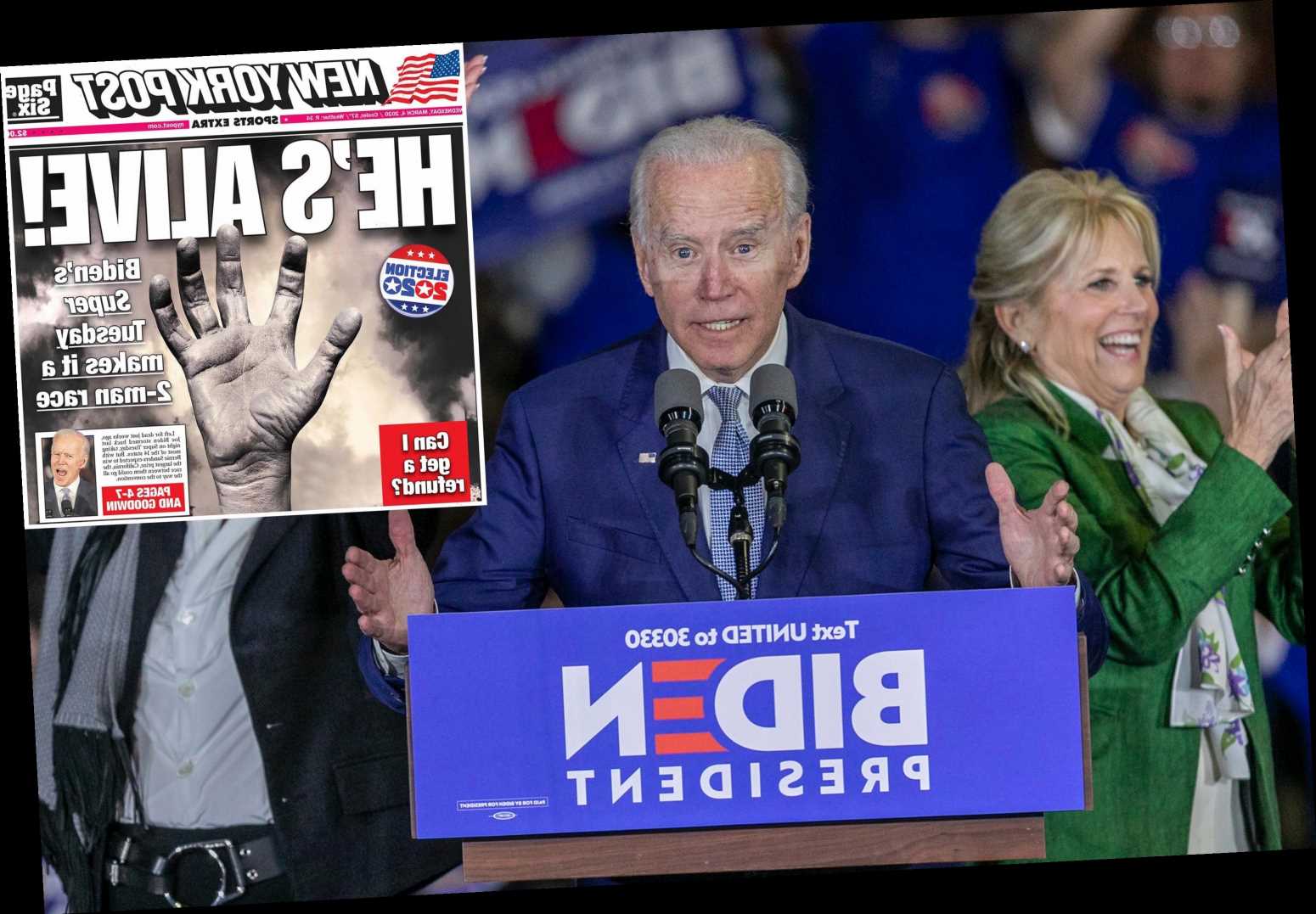 Joe Biden rises from the dead on Super Tuesday: Goodwin

It wasn’t pretty and there wasn’t a moment to spare, but the “Saving Joe Biden” campaign did something remark­able. It brought a dead man back to life.

For weeks, the former veep looked to be one gaffe away from elimination but, Lazarus-like, he rose from the grave to turn in a startling Super Tuesday performance. He won all the states he was expected to win, pulled an upset in Minnesota, put up a good fight across the board and won a nail-biter in Texas.

He’ll do very well in delegates and now has Big Mo on his side at exactly the right time. With the field of candidates shrinking and most of his former rivals backing him, Biden has leapfrogged Bernie Sanders and reclaimed the front-runner spot he held almost until the voting started last month.

His victory speech Tuesday night displayed his new vigor. Full of fire and rattling off short, simple sentences from a teleprompter, he pledged to fight for every vote and heal the nation’s divisions. It’s a good message, ­albeit from a flawed and fragile messenger.

It’s been a remarkable journey back to the top, but Biden couldn’t have done it without Sanders — or rather the fear of Sanders that swept the Democratic establishment like a virus and spurred it to action.

Party leaders were so desperate to stop the Vermont fellow traveler that all Biden had to do was win his first primary in three presidential races and — presto! — he was anointed the savior. If he wins the nomination, he will owe it all to South Carolina, specifically to the endorsement of Rep. Jim Clyburn and the solid support of the state’s black voters.

His smashing victory there last Saturday gave the party confidence that, with the right help, Biden had a good chance to go the distance. In short order, there was a well-staged parade of support from former rivals, and while Pete Buttigieg and Amy Klobuchar are not exactly heavyweights, their serial endorsements helped to create a sense that the tide was turning.

To be sure, there are still big doubts about Biden’s ability to win the nomination. The scrutiny of his past, and that of son Hunter Biden, will resume now that he’s a serious contender again and a relapse into somnolence could be fatal.

It should also be noted that almost all of the states he has won in the South will go for Donald Trump in the fall, meaning their significance comes with a discount in the overall scheme of things. For example, the last time South Carolina voted for a Democrat in the general election was 1976, when it backed Jimmy Carter from Georgia.

There is also another wrinkle to the Biden revival. The scramble for an alternative to Sanders was all about solving a problem without admitting its cause or identifying the guilty parties.

Put it this way: Who is responsible for radicalizing the party to the extent that Sanders, a red since the 1960s, could become the front-runner?

The culprits are the very same people who were panicked over a Sanders’ nomination. Start with Chuck Schumer and Nancy Pelosi, the ostensible congressional leaders who abdicated their jobs to become followers of the hate-Trump mob.

They foolishly refused to act like adults and work with the president for the good of the country.

Instead, they joined the juvenile resistance club and launched Dems on a three-year bender that started with Russia, Russia, Russia and ended with the most shameful and partisan impeachment in American history.

The nonstop effort to remove Trump — on false charges, no less — was nothing more than a vessel for far-left activists to hijack the power of Congress to attack the presidency. At the end, the failure was obvious, but it was too late to change the course of the presidential campaign.

Shaped by the lynch-mob madness, the candidates competed to see who could come up with the most outlandish and radical positions. It’s as if they decided to express their hatred of Trump and his supporters by trying to ­destroy the institutions and culture of the country.

The atmosphere was tailor-made for Sanders, who simply reprinted most of his insane, unaffordable and unworkable 2016 platform. Amazingly, nearly all his rivals signed on to virtually every harebrained idea that Rep. Alexandria Ocasio-Cortez and her ilk produced. Open borders, Green New Deal, higher taxes, impeachment and massive giveaways in health care, college tuition and even student debt. The nuttier the better.

Most striking, all the major candidates, and some, like Cory Booker, who thought they were major, agreed on the basics. Having failed to oust Trump, their answer was to parrot Sanders in calling for the reordering of American society by turning all its institutions upside down and inside out.

Sanders called it “total transformation,” and the others were 80 or 90 percent with him. Belatedly, Pelosi, Schumer and other swamp creatures realized only a sliver of the country was with them.

Desperate and running out of time, they seized on Biden as their alternative. Not necessarily because they think he can beat Trump, but because they feared that a Sanders’ nomination would have cost them their jobs, too.

So their man Biden is standing and taking nourishment but getting him a majority of delegates before the convention won’t be easy. And now that he’s the top dog, his policy ideas will be a fat target for Trump.

While it’s true Biden is more moderate than Sanders, that’s not saying much. If he should become the nominee, Biden’s platform would be the party’s most radical since George McGovern’s in 1972.

We know how that election ended.

When you drink celery juice every day, this is what happens to your body
Recent Posts