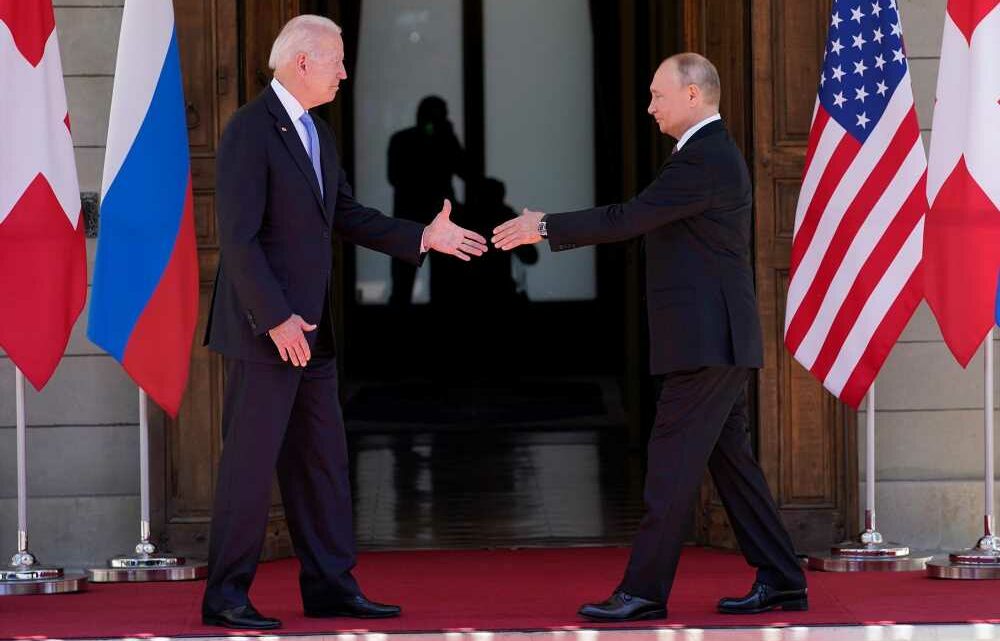 It's been a year of Antifa and unchecked anarchy: Devine

In a contest between Vladimir Putin and Joe Biden, there’s no comparison. Anyone in the world who cares about freedom wants to pull for the American president. The problem is Biden gives us so little to work with.

But the Russian strongman can’t polarize the country any more than our own president has done.

Biden — or his handlers — even found the time to send a tweet from Europe to decry the “Jim Crow” racism of red states trying to improve election integrity, mainly through enhanced voter identification.

“We’re seeing a coordinated attack on voting rights in this country. It’s Jim Crow in the 21st century, and it must end.”

Worse is Biden’s persistent misinformation about the Capitol Hill riot. At his post-summit press conference, he misled the world when he said a police officer was killed that day.

He described the scene on Jan. 6 as, “literally criminals . . . break through the cordon, go into the Capitol, kill a police officer.”

The riot was appalling enough without lying to make it worse. ­Officer Brian Sicknick died of a stroke the day after the riot, as the medical examiner concluded, and as his family acknowledged. There is no causal link between the riot and his death. He wasn’t hit in the head with a fire extinguisher by Trump supporters, as The New York Times reported. Nor was he poisoned by bear spray. In fact, in the court appearances of two men charged with assaulting him with bear spray outside the Capitol, the FBI conceded that the bear-spray can was never opened.

But Biden clings to the lie to justify his authoritarian war on domestic terrorists, aka Trump supporters, with expanded surveillance of dissidents deemed guilty of thought crimes. That sounds like something Putin would do.

Biden was responding to a question about Putin’s attempt at drawing a moral equivalence between his own persecution of political opponents and the Biden administration’s handling of the Capitol ­rioters: “People rioted and went into the Congress in the US with political demands and many people were declared as criminals and they are threatened with imprisonment for 20 to 25 years,” Putin said.

Biden dismissed the comparison as “ridiculous” but the fact he had to embellish his answer with a lie puts him on shaky ground. If the Capitol riot was the “worst attack on our democracy since the Civil War,” as Biden asserts, why exaggerate?

A united, confident America should easily be able to counter Putin’s whataboutism. How dare Russia criticize America’s human-rights record when Putin’s political opponents are regularly poisoned and whacked and locked up?

But since coming to office, Biden has eroded America’s moral high ground with his crackdown on the mythical bogeyman of “white ­supremacy” using Jan. 6 as the pretext to go after his political opponents.

He has used the FBI and DOJ with their “sedition” task forces and threats of “shock and awe” to demonize 75 million Trump supporters and lock up dozens in solitary confinement without trial.

His party has undermined America’s moral authority by weaponizing the false narrative of “systemic racism” and disparaging this country and its founding. Did they expect the rest of the world wouldn’t notice, or our enemies would not capitalize on the self-flagellation?

It’s not enough for Biden to cite “decency” and say “this is who we are.” He has to uphold American values, not just talk about them.

But he will chalk up his risky encounter with Putin as a win, because he squeaked through without a major gaffe, unless you count his vitriolic spray at CNN reporter Kaitlan Collins at the end of his teleprompter-assisted press conference in Geneva.

Biden was walking out when Collins called out an innocuous-enough question: “Why are you so confident [Putin will] change his behavior, Mr. President?”

Biden responded angrily, wagging his finger: “Where the hell — what do you do all the time? When did I say I was confident? . . . I’m not confident of anything . . . If you don’t understand that, you’re in the wrong business.”

It was a sour note for a press that had been on starvation rations when it came to presidential access for the eight-day European odyssey.

Wags online said Biden was tougher with Collins than he had been with Putin.

Later he approached the media before getting on Air Force One for the flight home to apologize for being a “wise guy” and told them: “You’re the brightest people in the country.”

But his explanation for his outburst only exposed a brittle ego. The reason he erupted at Collins was because he thought she was accusing him of being naïve and trusting, when he wants to be seen as a shrewd and tough operator on the international stage.

That’s what we want of the president, too, but it’s not how he comes across.

He is too desperate for affirmation from world leaders. At the G-7 and NATO, he kept wandering around saying: “America is back,” which was his way of fishing for compliments.

Sometimes he would add a thumbs-up, or a little fist pump, humbly inviting them to tell him how much better he is than Donald Trump. Besting Trump, erasing all his works and humbling his voters seems to the driving motivation of his presidency.

“I really do think — not me, but I think the country, has put a different face on where we’ve been and where we’re going,” he told reporters on the tarmac as he tried to schmooze his way back into their good graces.

“There was a good deal of skepticism about, ‘would the G7 sign on and give America back its leadership role.’ I think it did . . . They’re glad America is back.”

America never went away during the Trump years, except in Biden’s imagination.

“America is back” is a divisive, foolish slogan. It only baffles America’s allies and emboldens our adversaries.