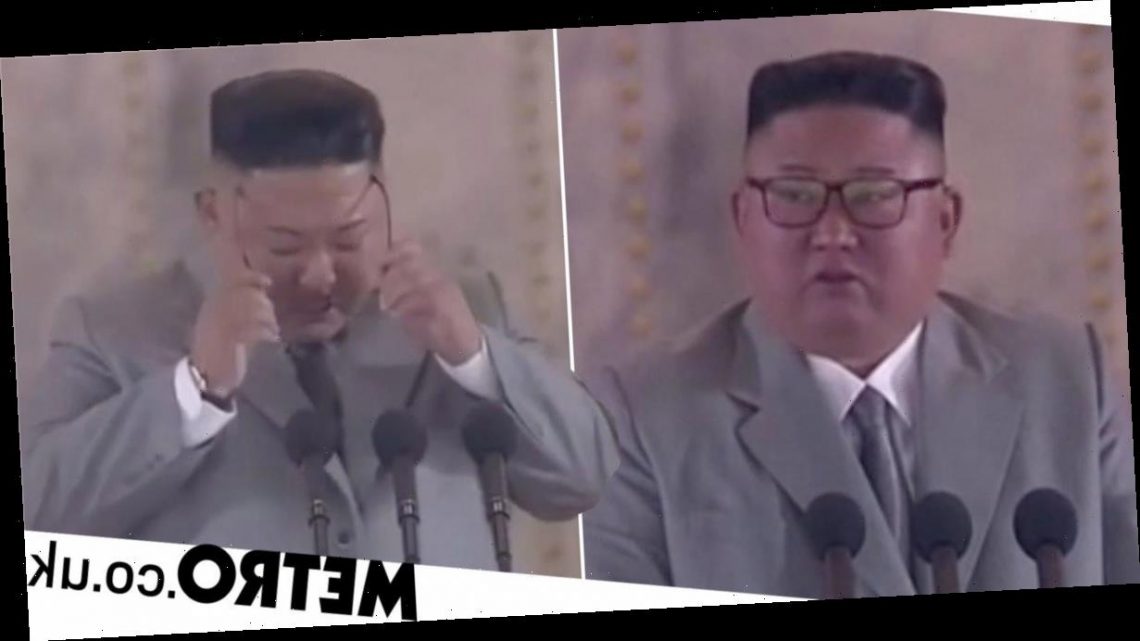 Footage has emerged of North Korean dictator Kim Jong-un weeping as he made a rare apology for unspecified failures on his part.

It’s believed the secretive state’s hardships have multiplied since the coronavirus pandemic, following years of international sanctions in response to its nuclear programmes and multiple natural disasters.

Experts have cast doubt on Kim’s claims that North Korea has not had any cases of the virus, while trade with China, his biggest economic partner by far, has fallen since borders were closed in response to the outbreak.

Speaking at a military parade celebrating the 75th anniversary of the communist Workers’ party, he said: ‘Our people have placed trust, as high as the sky and as deep as the sea, in me, but I have failed to always live up to it satisfactorily. I am really sorry for that.’

‘Although I am entrusted with the important responsibility to lead this country upholding the cause of the great comrades Kim Il-sung [his grandfather] and Kim Jong-il [his father] thanks to the trust of all the people, my efforts and sincerity have not been sufficient enough to rid our people of the difficulties in their lives.’

As expected, the highly-choreographed parade was centred around the unveiling of a new intercontinental ballistic missile.

The missile, shown on a transporter with 11 wheel axles and described by nuclear weapons experts as a ‘monster’, was exhibited alongside an array of military equipment, and the dictator warned he would ‘fully mobilise’ it if threatened.

It featured alongside the Hwasong-15, the longest-range missile ever tested by dictatorship, and what appeared to be a new submarine-launched ballistic missile.

But experts were surprised by how much his address was aimed at showing sympathy to the North Korean people.

Hong Min, director of the North Korea division at the Korean Institute for National Unification, told the Korea Times: ‘It is important to look at why he has come to shed tears at such an occasion.

‘Underneath his message, one can sense that Kim is feeling a lot of pressure on his leadership.

‘This shows that he is having a really hard time governing, and he feels pressured from worries that his people might be upset or swayed by this kind of difficulty. That is why he put a lot of emphasis on the people in this speech.’

‘It was appalling to see him shed crocodile tears after shooting our citizen to death.’