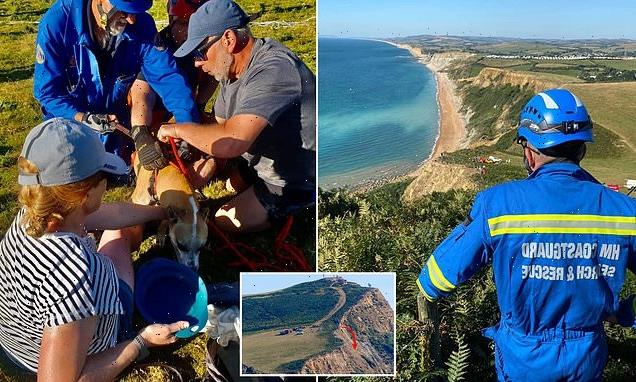 A pet dog has incredibly survived a fall over the edge of a 515ft cliff as the Coastguard came to the rescue when her owner got stuck in the mud attempting to find her.

Laney was being walked along a coastal path off her lead when she spotted an animal and chased after it before tumbling over the cliff edge in Eype, Dorset.

The Whippet crossed American Bull Dog plummeted over the steep drop at Thorncombe Beacon before landing on a plateau 150ft below.

Horrified owner Mark Hetherington walked 2.5miles to get to the bottom of the beach and started climbing towards Laney’s position, but got stuck in the mud 30ft up. 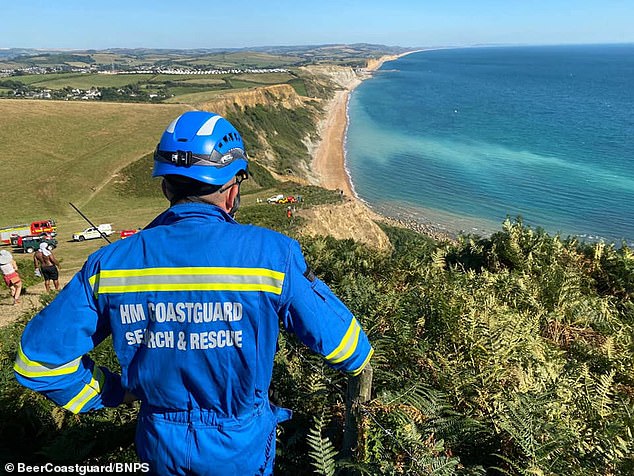 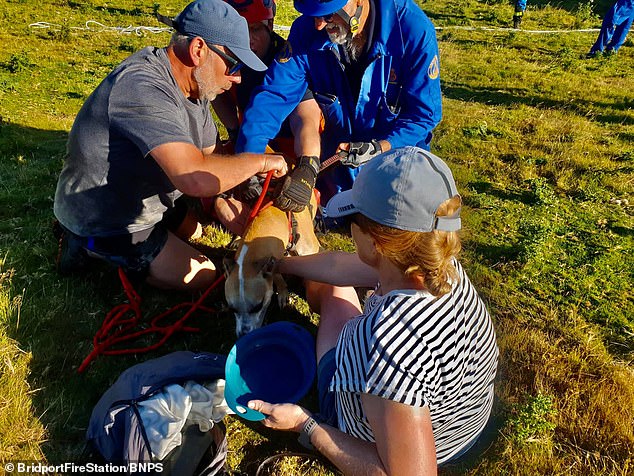 In a bid to rescue Laney (pictured), owner Mark Hetherington (left) headed down to the beach before climbing up the cliff face but got stuck in the mud himself and also had to be rescued

A fire service rescue team was dispatched to him and coastguard cliff rescue technicians went over the cliff-edge to look for four-year-old Laney.

They eventually found her in undergrowth apparently unharmed. She was placed in an animal rescue bag and lifted back to the cliff-top, where she was reunited with her relieved owners.

Mr Hetherington, paying tribute to them afterwards, said: ‘A massive thank you to all those that attended and the coastguard Control who responded to my original call.

‘Seeing Laney go over the cliff was the scariest thing I have ever witnessed.

‘To all you guys who either went over or helped those going over especially those volunteers THANK YOU!’ 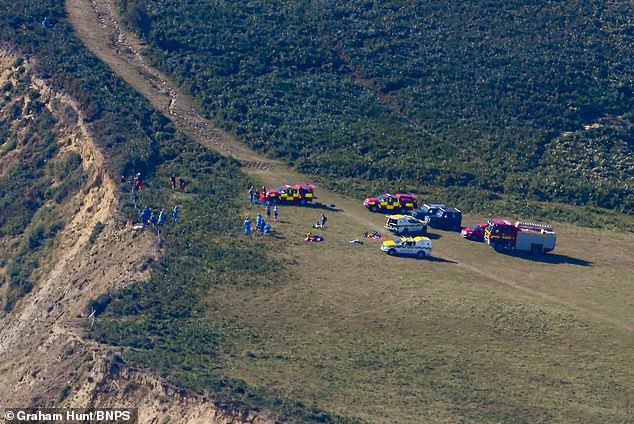 Pictured: the rescue teams at Thorncombe Beacon in Dorset who rescued Mark and Laney

He said: ‘Laney was off her lead and must have seen something and chased after it over the cliff edge.

‘It is a 150ft near-enough sheer drop to the plateau where she landed so she was very lucky to survive.

‘The owner walked 4km (2.5miles) to the beach at the bottom and started climbing the cliffs towards where he thought Laney landed but got stuck in the mud. He didn’t get very far up.

‘After the owner was rescued, the fire service and our cliff rescue team went down the cliff to try and locate Laney in thick brambles and undergrowth.

‘We had to move location but eventually Laney was spotted and put in an animal rescue bag to be lifted to the cliff top, where the owners were waiting. 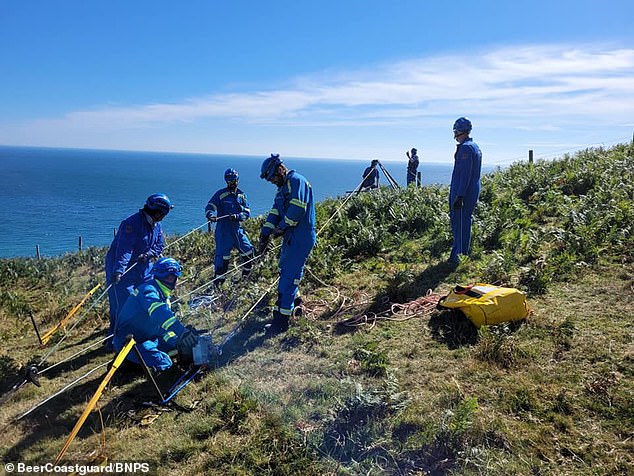 Pictured: The crews used specialist equipment to rescue Mark and his dog Laney and have since warned pet owners against allowing their dogs off the lead near coastal paths

‘It was an emotional reunion and miraculously Laney was uninjured. She just carried on walking along the path, this time on a lead.’

A Lyme Regis Coastguard spokesperson said: ‘On arrival at the top of the cliff, reports were received that the owner was now stuck in mud at the base of the cliff.

‘A full mud rescue of the dog owner was also now required with access to the base of the cliff requiring a round trip of at least 4km.

‘Additional resources were requested from Beer Coastguard and fire crews from Lyme Regis, Bridport and Colyton and special rescue teams from Weymouth and Poole were dispatched.

‘Lyme Regis lifeboat was also tasked to provide help with communication, conduct a shoreline search, and help move equipment and personnel by sea to the location.

‘As assets were relocated to the cliff base, the owner managed to free himself from the mud.

‘Both coastguard and fire rope rescue teams then carried out several descents off the cliff face to try and locate the dog.

‘After four and half hours the dog was found and recovered to the cliff top. The dog was then reunited with the owners.

‘We urge people to keep their dogs on a lead when walking on the coast path.

‘They should also not be tempted to try and rescue the pet themselves.’