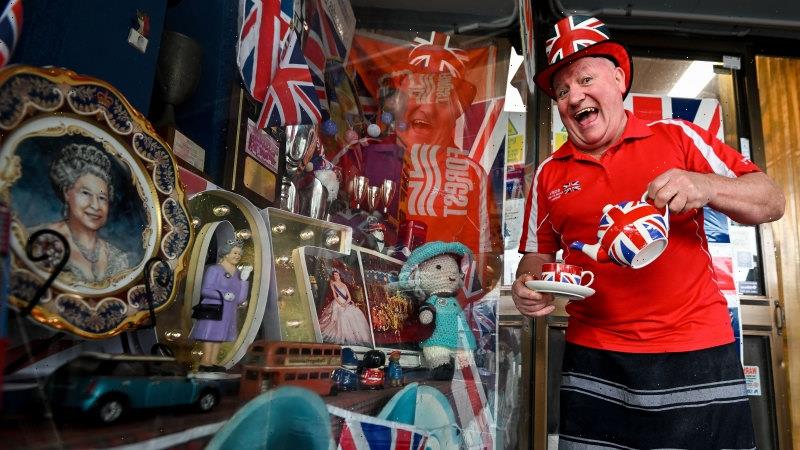 Busting out the bunting for his annual Queen’s birthday window display is one thing. But for British-born butcher Rob Boyle, the Queen’s Platinum Jubilee decorations have taken his window display at his Dandenong butcher shop to the next level.

The window at Rob’s British Butchers, in Melbourne’s south-east, is bursting with bunting and comes complete with plates featuring the Queen’s face, as well as puppets of the Queen. 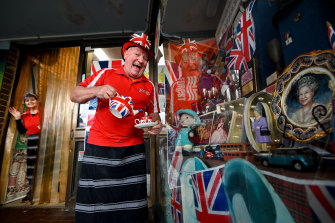 English-born Rob Boyle and his wife Jill are in full celebration mode at their butcher shop.Credit:Joe Armao

Boyle has created his own jubilee sausages: a “platinum pork piccalilli” and an aptly named “Queen’s tipple”, a herbed pork with thyme, basil and sage.

His staff have also made batches of Battenberg cakes, Bakewell tarts and Eccles cakes.

While most of his regular customers are British expats who crave the taste of home, Boyle’s jubilee-themed window display is also drawing in locals and passersby.

“I get people popping their heads in the shop door three to four times a day to compliment [me on] the window,” he said. “It’s a bit like the Myer Christmas windows.

“I know some people don’t like the royal family, but we are a democratic country and if the people can vote to become a republic, I’m not too fussed.”

As for future jubilees, Boyle said he has big plans. “We’d have to go crazy if she made it to 100. It calls for a street party.”

British expat Vicki Little admits she has “gone a bit crazy” decorating her home for a party to celebrate the Queen’s Platinum Jubilee.

Vicki and her husband Mike will host a party on Saturday with their three children and about 15 friends – “mainly Pommies” – at their house in Point Cook, in Melbourne’s west, to mark Queen Elizabeth II’s remarkable 70 years on the throne. 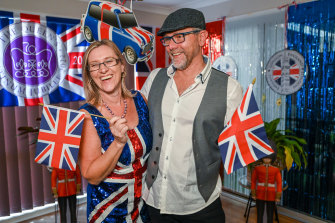 Vicki Little and husband Mike are all set for hosting a Jubilee party at their home in Point Cook.Credit:Joe Armao

Vicki will dress as 1990s British pop superstar Ginger Spice, while Mike will dress as a character from British period gangster TV series Peaky Blinders. Their children won’t be dressing up – they are “Aussie as far as they’re concerned”.

The family will play music from British bands such as Duran Duran, Spandau Ballet and Madness.

Vicki, a former Londoner who moved to Australia in 2003, has decked out their home in red, white and blue bunting, flags and crepe paper. They will be serving Victoria sponge, cupcakes and scotch eggs – and beer and tea, of course.

She wants to celebrate the “significant milestone” because “I don’t think we’ll get to see another Platinum Jubilee”.

“Being so far away from England, it’s time to come together. It’s a good thing to celebrate,” she said.

Among jubilee-related events elsewhere in Melbourne, there will be a church service on Sunday at 10am at St John’s Anglican church in Toorak where representatives of loyal Commonwealth societies will say prayers for Her Majesty and sing God Save the Queen.

At Christ Church in South Yarra, at 3pm on Sunday, the church’s choir and trumpeters from Melbourne Grammar School will play music from Queen Elizabeth’s Coronation in 1953.

On Saturday, from 11am, the British-born owners of Kings Creek Vineyard in Balnarring, on the Mornington Peninsula, will host a cellar door party, where a sausage sizzle, scones and drinks will be on offer. About 50 British expatriates, mainly Peninsula locals, are expected to attend.

A federal government website lists Platinum Jubilee events around Australia, including more than 80 buildings and monuments that will be lit up in royal purple, after dusk, over the weekend.

Melbourne buildings to be illuminated on Sunday night include Flinders Street Station, the Bolte Bridge and the MCG.