Irvine, California: A man has been arrested and charged for allegedly obtaining $US5 million ($6.3 million) in COVID-19 relief funds for his “sham businesses”.

He is accused of using the money to buy luxury sports cars, US federal authorities said.

Mustafa Qadiri, 38, was named in a federal grand jury indictment charging him with six counts of money laundering, four counts of bank fraud, four counts of wire fraud, and one count of aggravated identity theft. 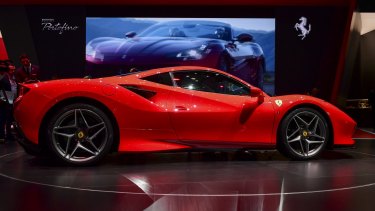 Authorities allege the man bought a Ferrari among other luxury cars with funds aimed at helping small businesses survive the COVID pandemic.Credit:Bloomberg

In May and June 2020, he submitted false Paycheck Protection Program loan applications to three banks on behalf of those companies, according to the indictment.

Those loans were made available through the recently CARES Act, designed to provide emergency funding to help Americans suffering from the economic effects of the COVID-19 pandemic. Part of the funds were forgivable loans to small businesses to retain employees and for other expenses.

He is also accused of using someone else’s name, social security number and signature to apply for one of the loans.

None of the businesses are operating, according to the indictment, and the banks funded the PPP loans and transferred funds into the accounts Qadiri controlled.

Once Qadari received the money, he bought luxury cars such as a Ferrari, a Bentley and a Lamborghini, federal authorities said, and he also went on lavish holidays and paid for other personal expenses.

Federal agents have since seized the cars along with $US2 million from his bank account.