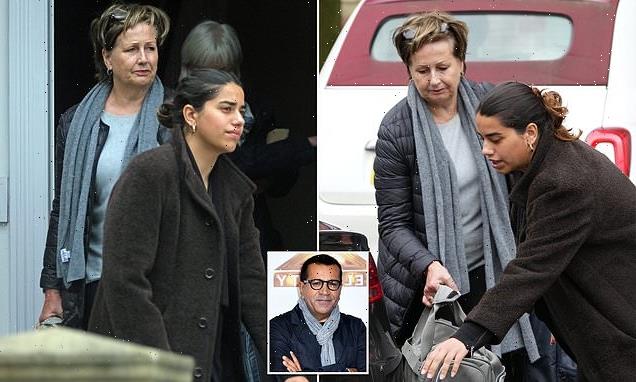 Martin Bashir’s wife and daughter left their £1.7million family home this morning one day after the BBC journalist was condemned over how he secured his bombshell Panorama interview with Princess Diana.

The father-of-three’s wife Deborah Bashir, 63, and daughter Eliza, 25, were photographed carrying a suitcase and two overnight bags into a waiting Audi A5 outside their six-bedroom detached home in Hampshire.

The couple, who only recently moved into the Edwardian house after selling their large North London townhouse for £1.8million last November, also have two older children – Phoebe, 30, and Samuel, 32.

Today, the Audi pulled up outside before the driver got out and ushered in Mrs Bashir and Eliza – who did not say anything to waiting photographers – along with another woman before driving off.

Ten minutes later a woman from the BBC’s press office came over to the gathered media and gave a contact phone number for any further questions, saying that Mr Bashir’s family would not be commenting.

Neighbours at the scene told photographers that they did not know who 58-year-old Mr Bashir was, and had seen him going in and out of the property but without introducing himself to them.

It comes after Lord Dyson’s report yesterday savaged Mr Bashir and several senior BBC executives over their handling of the infamous 1995 broadcast that triggered one of the biggest crises in the Royal Family’s history. 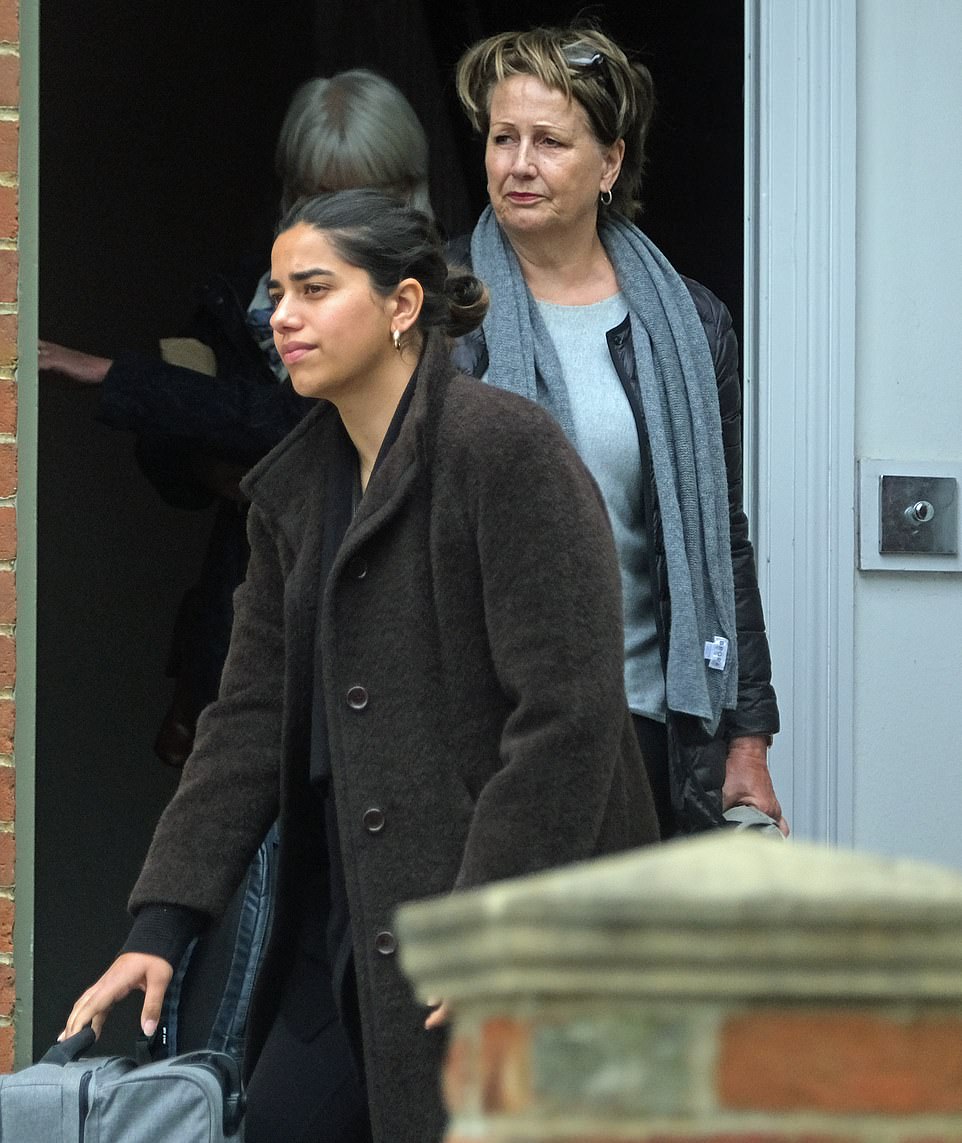 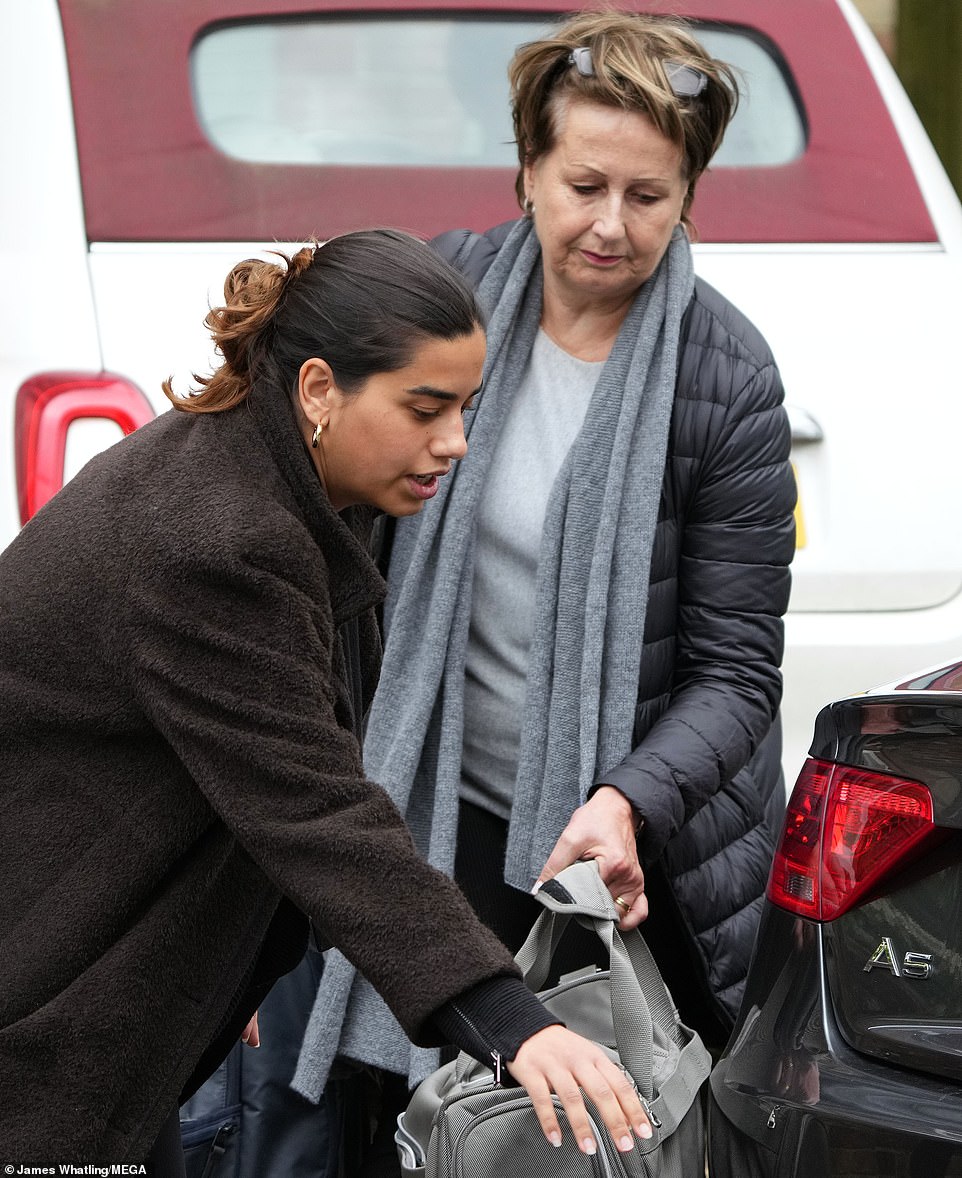 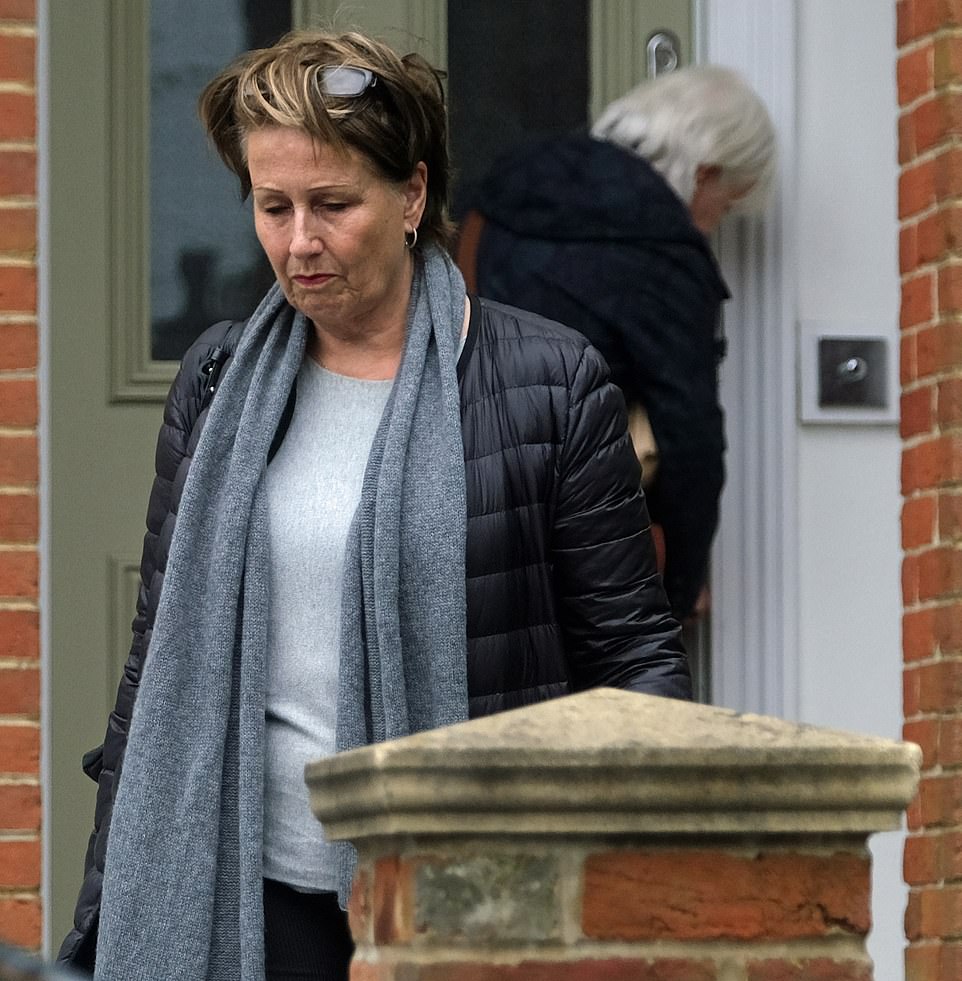 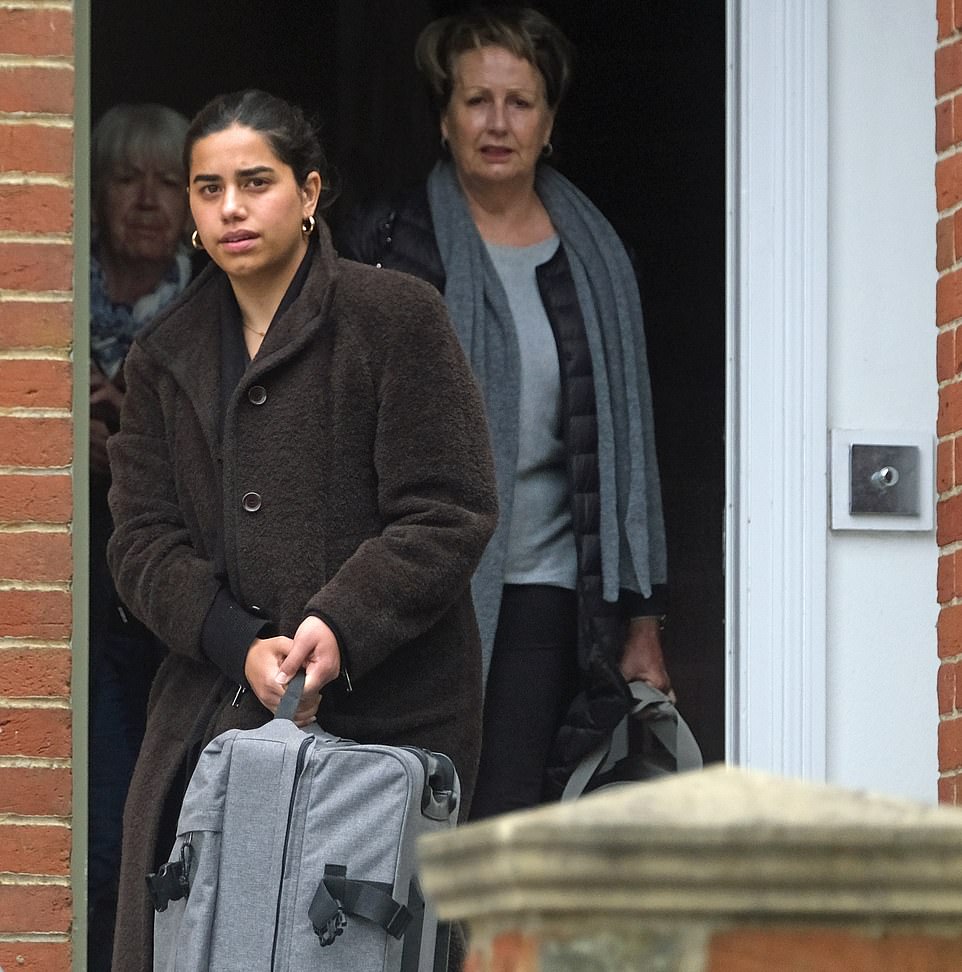 Mr Bashir’s daughter Eliza holds a suitcase as she leaves the family home in Hampshire today, followed by her mother

Mr Bashir was pictured in The Mail On Sunday earlier this month looking glum outside his home on April 30 before driving away in his £66,000 dark grey electric Mercedes EQC 400 car parked nearby.

The Hampshire house was bought just days before the BBC announced that Lord Dyson would examine allegations that Mr Bashir forged bank documents and spun a web of deceit to land his career-defining scoop.

Smooth-tongued Martin Bashir could ‘charm the birds from the trees’ 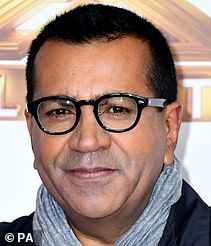 Martin Bashir was a smooth-tongued reporter who could ‘charm the birds from the trees,’ a report into his explosive interview with Diana, Princess of Wales said.

Mr Bashir, 58, made his career at the BBC with the stunning scoop, but an official inquiry found the corporation covered up his ‘deceitful behaviour’.

He faked bank statements and showed them to Diana’s brother Earl Spencer to gain access to the princess for the 1995 sit-down, a report by Lord Dyson said.

The inquiry painted the picture of a gifted reporter who was especially skilled at getting people to spill their secrets.

Though not a household name before the Diana interview, the report noted, he had been steadily building his experience as a TV reporter.

He joined the BBC’s current affairs department in 1989 on a programme called Public Eye, before switching to Panorama in 1992.

During his time on the investigative documentary series, Mr Bashir remained lesser-known than some of his colleagues – until his career-defining scoop in November 1995.

According to the report: ‘Although he did not have great experience, it is beyond doubt that he was an effective and skilled reporter.

‘Anyone who watched the interview with Princess Diana must have been impressed by his qualities as an interviewer. Quietly spoken and gentle, he exuded charm, warmth and, above all, empathy.’

Mark Killick was a senior reporter/producer on Panorama between 1988 and 1995 and knew Mr Bashir well, the report said.

He told Lord Dyson: ‘Martin’s greatest skill was he could persuade people to talk to him and on the record. It is a cliche, but he really could charm the birds from the trees.’

The report added: ‘Mr Bashir seemed to have no difficulty in persuading Princess Diana in the interview to disclose some most intimate personal matters as well as to express her views on all manner of other things, including the future of the monarchy.’

After the Diana interview Mr Bashir went on to forge a successful career on both sides of the Atlantic.

He later moved to the US where he co-anchored the current affairs show Nightline on ABC before moving to MSNBC, where he served as a political commentator until 2013.

He subsequently returned to the BBC as the broadcaster’s religion editor, a role from which he resigned this month citing ill health.

Mr Bashir has apologised for faking the documents and said it was ‘a stupid thing to do’, and ‘an action I deeply regret’, but added it had ‘no bearing whatsoever on the personal choice by Princess Diana to take part in the interview’.

According to estate agent details, the property, bought last November without a mortgage, Land Registry documents show, boasts a large landscaped garden, is ‘beautifully refurbished throughout’ and has ‘elegant reception rooms’ arranged over three floors.

One onlooker said at the time: ‘He seems to be keeping a very low profile. His car is very flashy, so maybe that’s why he hasn’t got it parked on his drive. I don’t think he wants to be recognised.’

The father-of-three moved to the leafy county after selling his London townhouse to Lucy Litwack, owner of the Coco de Mer lingerie firm, last November.

It comes as William and Harry condemned the BBC for its treatment of Diana, saying their mother’s Panorama interview fuelled her ‘fear, paranoia and isolation’ and a wider ‘culture of exploitation and unethical practices ultimately took her life’.

The furious royal brothers issued scathing statements on the corporation’s actions after an inquiry found the broadcaster covered up ‘deceitful behaviour’ used by Mr Bashir to secure his headline-making interview with their mother in 1995.

Mr Bashir was in ‘serious breach’ of the BBC’s producer guidelines when he faked bank statements and showed them to Diana’s brother Earl Spencer to gain access to the princess, a report by Lord Dyson said.

The findings of the 127-page document have prompted developments, with Scotland Yard, which previously said it would not launch a criminal investigation into Bashir’s actions, now saying it will ‘assess’ the report to ‘to ensure there is no significant new evidence’.

Speaking during a visit to Portsmouth today, Prime Minister Boris Johnson said he was ‘obviously concerned by the findings of Lord Dyson’s report’.

He said: ‘I can only imagine the feelings of the royal family and I hope very much that the BBC will be taking every possible step to make sure nothing like this ever happens again.’

Justice Secretary Robert Buckland said ministers would be looking into whether there were BBC governance issues outside of the remit of Lord Dyson’s reports that needed reviewing.

Mr Buckland told ITV’s Good Morning Britain: ‘My colleague the Culture Secretary, Oliver Dowden, has rightly said that we should look at the governance structures of the BBC.

‘They have apologised, which is appropriate, but clearly the wider issues of governance and the way things are run now need to be looked at.’

In his rebuke of the BBC, the Duke of Cambridge said: ‘The interview was a major contribution to making my parents’ relationship worse and has since hurt countless others.

‘It brings indescribable sadness to know that the BBC’s failures contributed significantly to her fear, paranoia and isolation that I remember from those final years with her.

‘But what saddens me most, is that if the BBC had properly investigated the complaints and concerns first raised in 1995, my mother would have known that she had been deceived.

‘She was failed not just by a rogue reporter, but by leaders at the BBC who looked the other way rather than asking the tough questions.’

Calling for the documentary never to be aired again, William, 38, said: ‘In an era of fake news, public service broadcasting and a free press have never been more important. These failings, identified by investigative journalists, not only let my mother down, and my family down; they let the public down too.’

Away from the Panorama scandal, Harry has admitted in his new documentary series with Oprah Winfrey, the trauma of his mother’s death led him to use alcohol and drugs to ‘mask’ his emotions and to ‘feel less like I was feeling’.

The Duke of Sussex, 36, said in his statement about Diana’s interview: ‘Our mother was an incredible woman who dedicated her life to service. She was resilient, brave, and unquestionably honest. 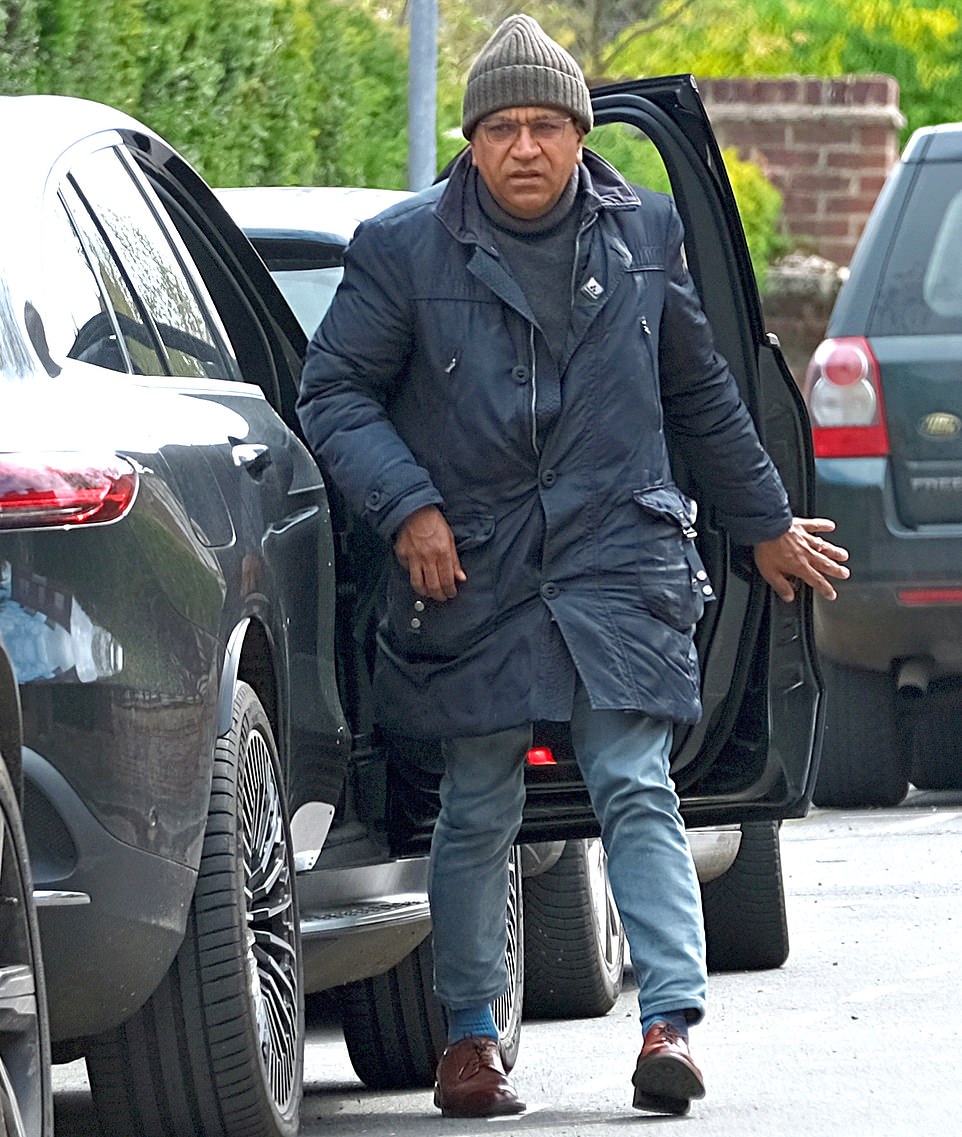 Mr Bashir is pictured last month looking glum outside his home before driving away in his £66,000 Mercedes EQC 400 car 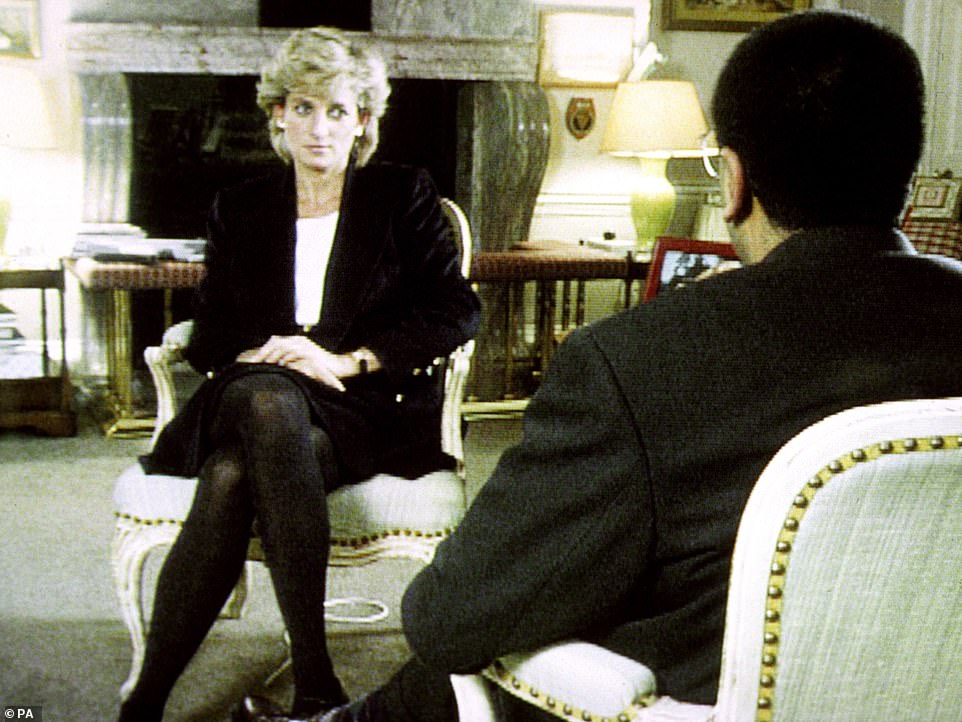 Diana, Princess of Wales is pictured during her bomshell Panorama interview with BBC journalist Martin Bashir in 1995 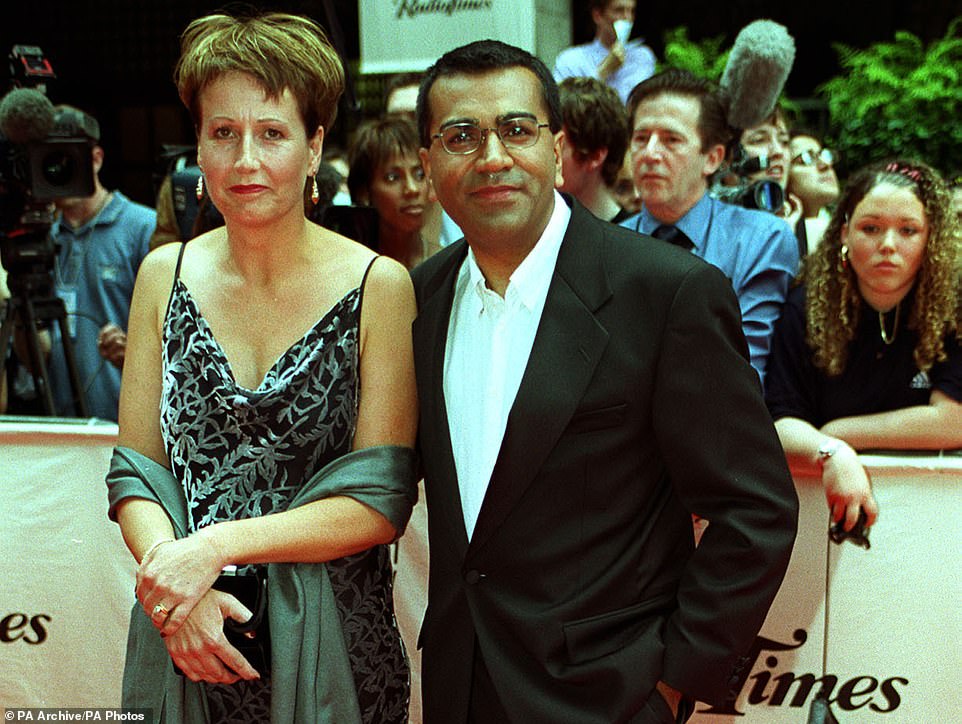 ‘The ripple effect of a culture of exploitation and unethical practices ultimately took her life. To those who have taken some form of accountability, thank you for owning it.

‘That is the first step towards justice and truth. Yet what deeply concerns me is that practices like these-and even worse-are still widespread today.

‘Then, and now, it’s bigger than one outlet, one network, or one publication. Our mother lost her life because of this, and nothing has changed.

‘By protecting her legacy, we protect everyone, and uphold the dignity with which she lived her life. Let’s remember who she was and what she stood for.’

Jenelle Evans: Freakin’ Jace Is Ruining My Relationship With My Mom, Dude!