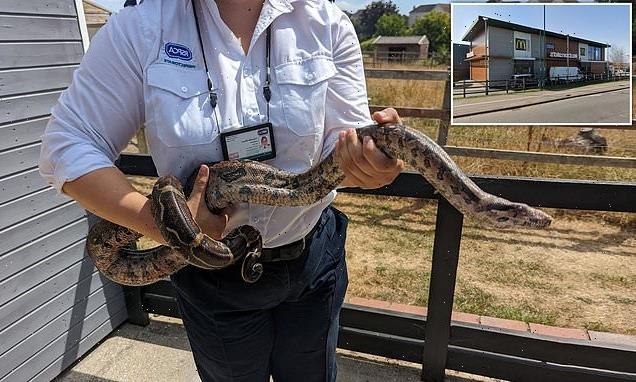 Not that kind of wrap! McDonald’s staff left in shock after discovering FIVE FOOT boa constrictor – usually found in South America- roaming around near drive-thru in seaside town

McDonald’s staff rallied round to help save an injured five foot boa constrictor found near their drive-thru restaurant, 5,000 miles from its native South America.

The stray snake was spotted roaming around outside the fast-food chain in Bognor Regis, West Sussex and handed in to restaurant workers who boxed it up and called the RSPCA.

The finder thought the snake was a native British adder which had been injured in a road accident but it turned out to be a boa constrictor, a large, non-venomous snake found in tropical South America, as well as some islands in the Caribbean. 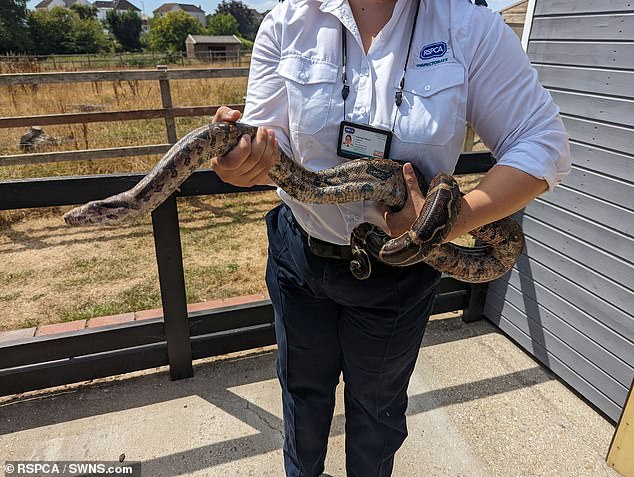 RSPCA inspector Hannah Nixon, who answered the call, said: ‘Based on the report that was phoned in, I was expecting an adder, which is a fairly common native British snake.

‘But when I peeked in the box, I was confronted with a full 5ft of boa constrictor – a full, non-native snake and not what I was expecting at all.

‘The poor animal did look like he had been in the wars a bit, with a few scratches and cuts, so I have taken him to our Stubbington Ark animal centre in Fareham, Hampshire to get him checked out.’

She added that snakes get particularly active in hot weather and thinks it may be an escaped pet. 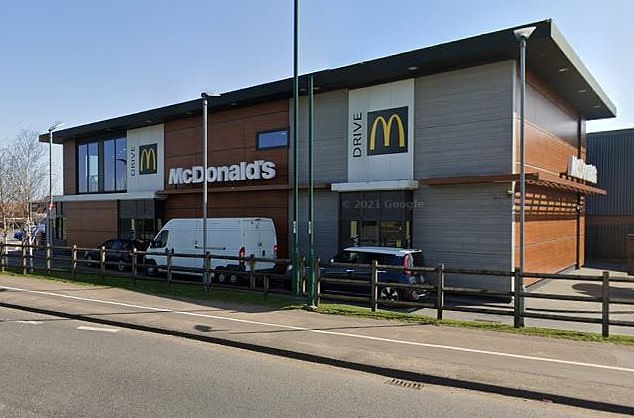 The RSPCA said many owners take snakes outside in the summer and that while sunlight is good for the reptiles, owners should make sure their pet is secure as they can warm up and move quickly on hot days.

Ms Nixon added: ‘Snakes are excellent escape artists and will take the opportunity of a gap in an enclosure door, or a loose-fitting lid to make a break for it.

‘Last year, we took over 1,200 reports about snakes, with the highest number of calls coming in during the summer months.

‘This is not surprising, as snakes become more active during hot weather.

‘So we would urge all pet snake owners to be extra vigilant at this time of year, invest in an enclosure suitable for the particular species and make sure that enclosure is kept secure and locked, if necessary, when unattended.’

The RSPCA said most exotic pets are unlikely to survive in the UK without human care and recommends that anyone wanting to keep a boa constrictor as a pet should make sure they are fully able to care for its needs as they are completely dependent on their owners.

Ms Nixon added: ‘Exotic pets such as snakes often end up in the RSPCA’s care after people realise they’re not easy to care for or the novelty wears off.

‘Others are rescued after they have been abandoned or been released on purpose, which then could pose a risk to our native wildlife.

‘The needs of reptiles can be challenging to meet because they are just the same as they would be in the wild and are fundamentally linked to certain behaviours, diets or environmental conditions that can be difficult to replicate in a domestic environment.

‘The RSPCA urges prospective owners of reptiles such as snakes to thoroughly research the needs of the particular species and what is required in the care of the animal, using expert sources.

‘People should only consider keeping a snake if they can ensure they are fully able to provide for these needs.’

Never mind the sharks, look out for the snakes! Surge in venomous ADDERS on Britain’s beaches threatens staycationing families

By Alice Giddings for MailOnline

Many of the reports have come from coastal areas where the snakes are basking in sand dunes close to crowded bucket-and-spade beaches.

Adders are Britain’s only venomous snake and are not usually aggressive, preferring to slither away, but they will bite if they feel cornered, or threatened by dogs.

In Wales, Bridgend council has seen an increase, specially in the Rest Bay area of Porthcawl.

It follows new research published in the Clinical Toxicology journal which revealed that more people in the UK are reporting injuries caused by snakebites than ever before.

Most are said to have been caused as a result of exotic snakes being kept as pets, but the risk of adder bites in the countryside and along coasts will grow as the summer progresses.

Between 50 and 100 people in the UK are bitten each year, but three in four victims have only a ‘negligible’ reaction.

However the elderly and frail can die without urgent treatment and the Reptile and Amphibian Conservation Trust say there have been 14 recorded human deaths from adder bites since 1876, the last in 1975.

Bridgend council warned: ‘With people flocking to the coast, the stunning bays and beaches of Porthcawl are proving to be popular with more than just tourists and visitors.

‘If you think that you may have been bitten by an adder, stay calm and do as little walking as possible.

‘Go directly to A&E or call 999 for assistance, and remove any jewellery and watches from the bitten limb. Never tie a tourniquet, try to cut or suck the venom out or attempt to catch or kill the snake.’

Councillor John Spanswick, cabinet member for communities, said: ‘Most reported incidents involve dogs rather than humans, and in the vast majority of cases, a full recovery is made.

‘Adders and grass snakes, which are also native but are harmless, can often be seen at the side of rural paths, and can be identified by their distinct markings.

‘Adders have a zig-zag pattern running along their backs, while grass snakes have a distinctive yellow collar and two small black triangles just below their heads.

‘The council and its partners have produced a handy guide called Snakes of the Bridgend Coast to help people spot snakes and other reptiles within Bridgend County Borough, and which offers advice on what to do if you come across one.

‘The best advice for anyone who encounters a snake while out and about is to simply leave them alone, and try not to disturb them.

‘All British reptiles are protected under law, and the adder is a species that is considered to be particularly at risk.’

In April the parents of eight-year-old Jake Closier, of Camden Town, London, told how they were on a day trip to Hemsby beach in Norfolk when he was bitten.

His hand ballooned to nearly five times the normal size and he needed anti-venom treatment at James Paget University Hospital in Great Yarmouth to stop him going into anaphylactic shock.

Pet owners were also warned in April after a dog on a Norfolk holiday beach was attacked by one of the hissing vipers.

Indi, a Hungarian Vizsla, was saved after treatment at the vets, but owner Rebekah Mann says it was a close-run thing.

Three-year-old Indi was being monitored for long-term effects after she was bitten in Winterton on the Norfolk coast.

Rebekah, a 38-year-old pharmacist, was walking the dog with friends along the sand dunes on the beach.

Indi was bitten by an adder’s fangs but surprisingly did not react at the time.

It was only when she was back at home in Norwich that Rebekah noticed her pet’s leg was swollen and getting worse all the time.

Rebekah called the vets, not realising at the time what had happened.

At the surgery in Taverham, the dog’s leg was shaved, revealing the tell-tale puncture wounds where the poison had entered.

Taverham Vets posted advice on its Facebook page advising people carry their dog if they suspect it has been attacked to prevent the venom circulating around the body.

Penmellyn Vet Group in Cornwall, who had to treat six dogs in a five-day spell after they were bitten last year, urged people to keep pets on leads, specially while walking in sand dunes or grassland.

The vets said: ‘Keep your eyes to the ground and if you do see any black and white snakes do give them a very wide berth.’

Only about a foot to 18 inches long, their venom can even put humans in hospital though they rarely attack unless they feel threatened or they’re defending their young.

There are two other species of snake found wild in Britain – the grass snake, which can grow to four or five feet, and the much smaller and rarer smooth snake – but they are harmless.

Adders love open heaths and grassy banks, and are often found on clifftops and seaside dunes.