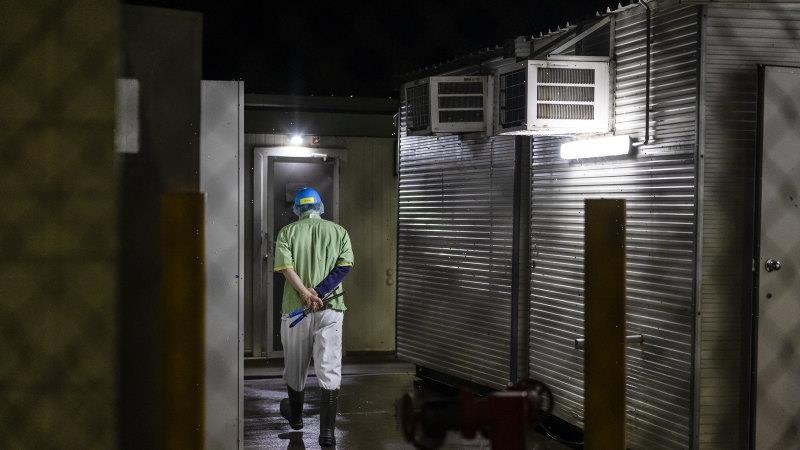 A Tax Office investigation into Chinese labour supplier Scott Shi, who placed thousands of foreign workers into Australian meatworks, will be heard before the High Court as he tries to keep secret the whereabouts of more than $100 million in assets believed to have been moved offshore.

The Australian Taxation Office is seeking an order from the High Court to force Mr Shi, also known as Zu Neng Shi, to give access to a sealed document. He is resisting because he fears it could be used to bring criminal charges against him. 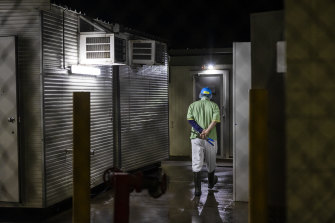 A worker at Midfield Meats.Credit:Nicole Cleary

Mr Shi, an accused tax evader, has for two years refused to provide the information to Tax Commissioner Chris Jordan and his investigators. The High Court is now being asked to weigh the right of an individual – Mr Shi –to be protected from self-incrimination against the public good in the recovery of a multimillion-dollar tax debt.

Mr Shi has been of interest to Tax Office investigators since 2014. His wealth is built on his many years of operating 29 companies supplying 1100 Chinese, Taiwanese and other Asian workers a year to the meat industry. His businesses earned revenues of $349 million between 2008 and 2017.

His empire came crashing down in 2018, when the Australian Federal Police executed search warrants on several of his properties. The warrants listed Mr Shi as being suspected of 11 criminal offences, including money laundering, tax fraud, secret commissions and breaches of migration laws. He was ordered by the Federal Court in 2019 to pay $42 million to the Tax Office. This amount remains unpaid.

Lawyers for the Tax Office argue the case has ramifications for the “effective operation, supervision and enforcement of freezing orders”, and represents the first time the High Court has had to consider the power of lower courts to issue certificates to protect criminal suspects against self-incrimination.

In responding to the court order, Mr Shi provided one document to the Tax Office which said his Australian-based assets were worth just $360,000. He provided a photocopied version of another document in a sealed envelope with details of the enormous sums his companies had transferred from Australia to China over several years.

Mr Shi then initiated legal action to ensure that document was never shown to the Tax Office because he feared it contained information that could be used in a criminal prosecution against him. Mr Shi has still not been charged with any criminal offences.

Most of Mr Shi’s companies now no longer exist, and the Tax Office has accused him of overseeing a massive “phoenixing” operation. Phoenixing is a process in which companies are deliberately liquidated to avoid paying debts, then replaced by new ones to carry on the business. The Tax Office has claimed Mr Shi owed as much as $163 million in unpaid taxes.

The ATO was unable to comment on the case because it was before the courts, but a spokesman said Australians would expect the commissioner to do all in his power to identify assets hidden overseas to avoid the payment of debts.

The Tax Office’s barrister, Simon White, SC, has argued Mr Shi’s claims of self-incrimination were speculative because there were no criminal charges against him and the Tax Commissioner had only ever sought access to the document for the purposes of recovery.

Mr Shi’s barrister, Tim Game, SC, told the court in April that “this was no ordinary criminal investigation and no ordinary tax case”. Mr Game said Mr Shi’s secret document would be a “very useful tool of investigation”.

The trial judge who heard Mr Shi’s application to protect against self-incrimination was the then Federal Court judge Simon Steward. Justice Steward was appointed to the High Court in December and is not involved in hearing the Tax Office’s appeal.

Justice Steward ruled that it was in the public interest for the Tax Office to have access to the “most complete information concerning the worldwide assets of Mr Shi” to aid in the recovery of money.

However, he said it was in the interests of justice that the tax commissioner use his powers of compulsion under the Tax Administration Act to get the information from Mr Shi rather than from the document.

The High Court has yet to rule on the case.