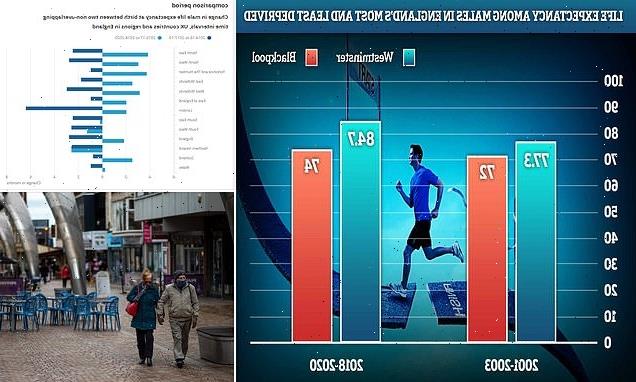 Men in the wealthiest areas of England now live 10 YEARS longer than those in the poorest, analysis reveals

Men in England’s wealthiest areas now live for a decade longer than those in the poorest, an analysis has revealed.

But over the same period men in Blackpool saw their life expectancy rise just two years on average, from 72 to 74.1 years.

Veena Raleigh, who uncovered the figures and is a fellow at the think-tank, said the regional differences were likely a reflection of the North/South economic divides.

Ms Raleigh added: ‘The divide in life expectancy has amplified. Reducing the gross health inequalities has never been a steeper mountain to climb.’

Improvements in life expectancy across England have stalled in recent years, with the pause being blamed on bad flu seasons, fewer improvements in cardiovascular treatment, economic deprivation and Covid.

The findings underline the mammoth task Health Secretary Sajid Javid now faces, with No10 committed to ‘levelling up’ the whole of the UK. 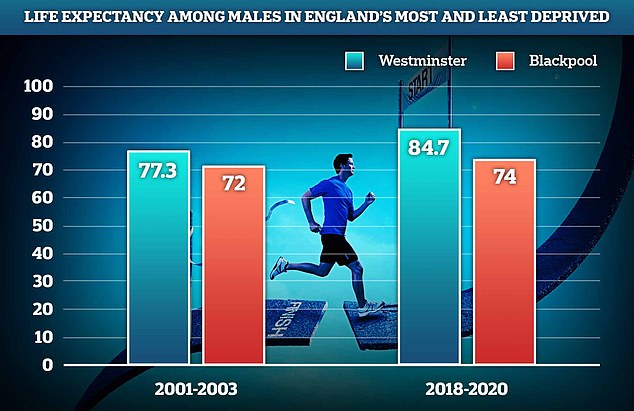 In Westminster (blue) life expectancy rose to 84.7 years for men by 2020, while in Blackpool (red) it was 74 years by the same date (shown above) 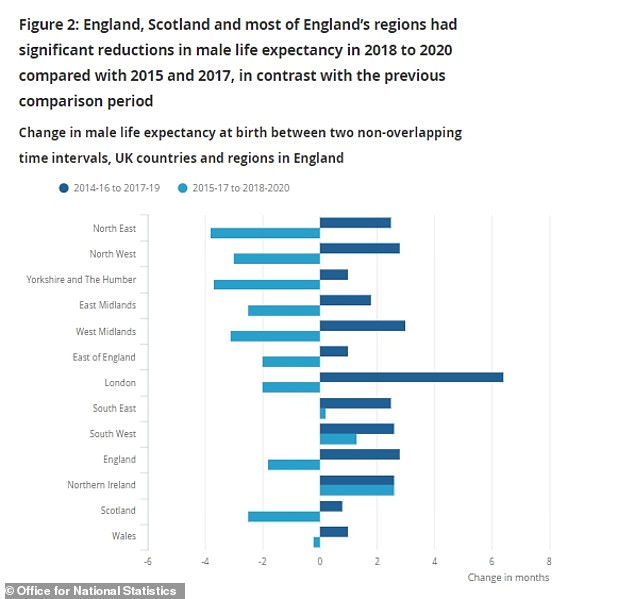 The report was based on an Office for National Statistics report on regional inequalities. It revealed that between 2015 to 2017 and 2018 to 2020 the South West and the South East were the areas to see a growth in life expectancy for men 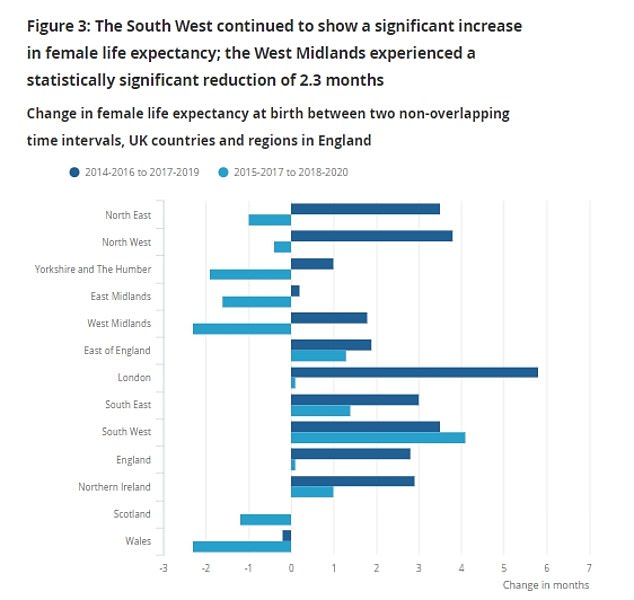 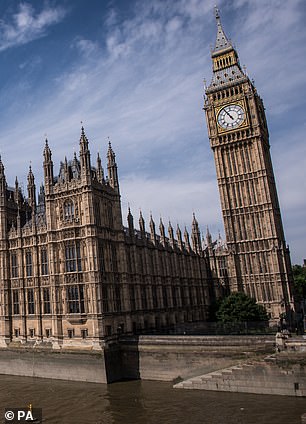 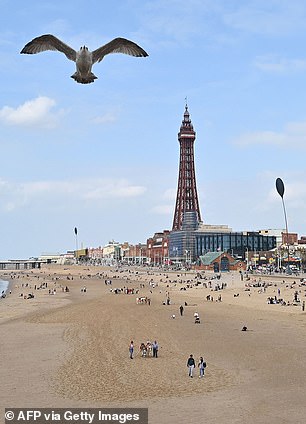 Life expectancy among men in Westminster was 84.7 years by 2020, but in deprived Blackpool it was 74 years.

Official figures have repeatedly pointed to the South of England having a higher life expectancy than the North.

The Office for National Statistics report showed that men in the South East could expect to live 80.6 years on average in 2018 to 2020.

For comparison, in the North West — where the country’s most deprived area Blackpool is based — the life expectancy for men over the same period was 77.9 years.

Veena Raleigh, a fellow at the King’s Fund, says that the differences are likely a reflection of economic disparities.

Ms Raleigh said this is likely down to a range of factors including bad flu years, fewer improvements in cardiovascular treatments and economic deprivation — alongside the Covid pandemic.

The King’s Fund analysis painted a similarly bleak life expectancy picture among women, where the gap is now eight years between England’s most and least deprived areas.

A comparison between the areas with the highest and lowest life expectancies among men twenty years ago and today reveals a similar picture.

The data for the King’s Fund analysis comes from an Office for National Statistics report looking into disparities in life expectancy between regions.

It showed life expectancy among men grew in the South East and South West between 2015 and 2020, but fell in every other region.

And among women life expectancy over the same period only grew in the East of England, London, South East and South West.

Life expectancy growth in England has stalled over the last decade, figures show.

But just 0.3 years of this improvement happened after 2010.

‘They symbolise and are the product of wider socio-economic inequalities, with devastating impacts on individuals, their families and communities, and a waste of human and social capital.

‘If the Secretary of State’s call that it is time to level up in health is to mean anything, the OHID (Office for Health Improvement and Disparities) will need to take a multifocal lens to addressing the many and cross-cutting dimensions of inequality, its challenges made greater by the fall in life expectancy to 2010 levels and exacerbation of inequalities caused by the Covid pandemic.’

Mr Javid used a recent keynote speech in Blackpool on ‘levelling up’ health to pledge to tackle ‘the disease of disparity’.

Boris Johnson said in his speech at Conservative Party Conference last week that levelling up was ‘the greatest project that any Government can embark on’.

The Prime Minister pledged his team would ‘get on with our job of uniting and levelling up across the UK’, and made it his mission to solve the country’s ‘imbalanced society’ to ‘promote opportunity with every tool we have’.

The Department of Health said: ‘Covid has exposed fractures and inequalities within our health and care system, and in many places the pandemic has deepened them.

‘This Government is committed to levelling up from the pandemic and the new Office for Health Improvement and Disparities will drive the mission to tackle health inequalities.’

The OHID opened at the start of this month with the explicit aim of tackling health inequalities across the country.

The analysis was based on the Office for National Statistics’ National life tables report and life expectancy for local areas report published last month.

The figures were published by the King’s Fund in a blog post.