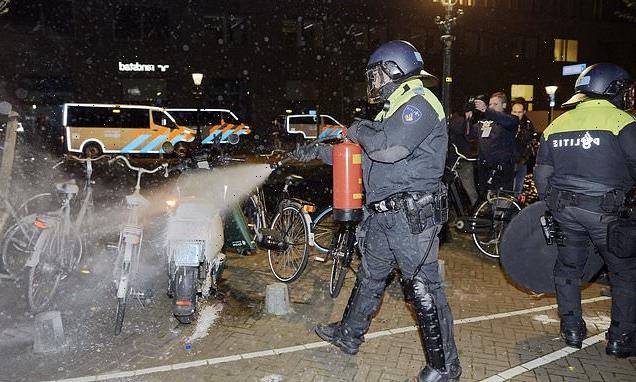 Has PM’s early ‘Freedom Day’ gamble paid off? Ministers privately believe that falling UK Covid cases – and rising cases on the continent – are down to decision to release lockdown rules earlier than European countries

Ministers privately believe that falling Covid infection levels in the UK – and rising cases on the continent – amount to a vindication of Boris Johnson’s decision to release lockdown restrictions earlier than European countries.

The latest figures from the Office for National Statistics (ONS) show that about one in 60 people in England had Covid in the week to November 6 – down from one in 50 the previous week.

Government sources are pointing to the contrast with Germany, which is in the grip of a devastating fourth wave with the number of confirmed daily cases quadrupling in a month. 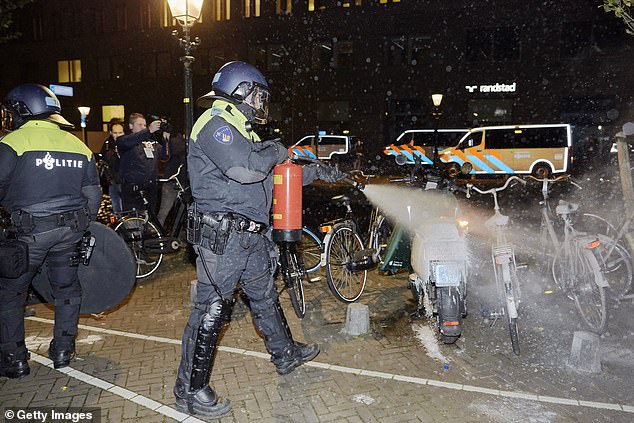 FLASHPOINT: Riot police officers face anti-lockdown demonstrators as they gather in The Hague on Friday night

The Netherlands has returned to a three-week partial lockdown after its prime minister, Mark Rutte, said: ‘The virus is everywhere and needs to be combated everywhere.’

The move was greeted by anger on the streets of The Hague on Friday night as demonstrators hurled stones, fireworks and bicycles.

Riot police retaliated by firing water cannon after warnings that hospitals would be overwhelmed without closing bars, restaurants and supermarkets early. Austria is also set to impose a lockdown on unvaccinated people.

The UK is in a different position and yesterday Professor Neil Ferguson said Britain was ‘in quite a different situation from those European countries’.

The epidemiologist, dubbed Professor Lockdown for his modelling that influenced the first UK shutdown, added: ‘I think it is unlikely we will get anything close to what we had last year, that catastrophic winter wave.

‘We might see slow increases as we did in October, for instance, but not anything as rapid as we saw last year.’

Speaking to BBC Radio 4’s Today programme, he continued: ‘We can’t be complacent, but at the moment I don’t think we’ll be in a situation the Netherlands is coming into where they really do need to get on top of rising case numbers using social distancing. I very much hope we can avoid that in this country.’ 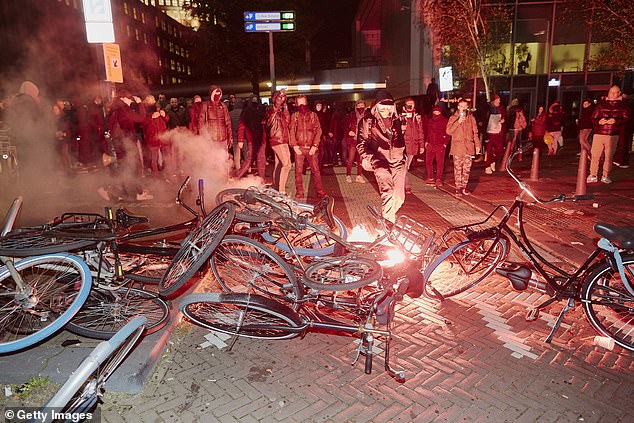 The Netherlands has returned to a three-week partial lockdown after its prime minister, Mark Rutte, said: ‘The virus is everywhere and needs to be combated everywhere.’

Mr Johnson took the decision to open up in July based on advice that it would be better to experience a spike in infections before winter set in. It led to a surge in cases among school pupils and young adults, which is now starting to abate.

A Government source said: ‘It was a bold move but it looks as if it has paid off – getting the worst out of the way while the evenings were still light and without the compounding effect of flu.’

No 10 was also quicker off the mark in launching booster jabs for older people. The decision, which was made despite opposition from parts of the medical establishment who wanted to send stocks to poorer nations, has helped to protect the most vulnerable members of society from severe Covid illness.

On Friday, Mr Johnson warned of ‘storm clouds’ gathering over Europe as a warning to encourage the over-50s to get their jabs as soon as they are eligible.

After a faltering start, 12 million people have now had their booster across the UK with 2.4 million given in the last week alone. 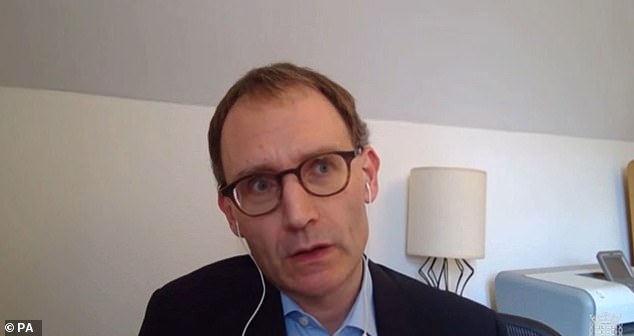 Epidemiologist Professor Neil Ferguson told BBC Radio 4’s Today programme Britain was ‘in quite a different situation from those European countries’. Pictured speaking to the House of Lords Science and Technology Committee in June 2020

A new report on the booster’s effectiveness in Britain is due to be published this week. But Professor Ferguson said the UK’s quick booster rollout might be a fundamental reason it is now faring better than Germany, the Netherlands, and other continental countries.

By the start of November, Germany had only administered about two million boosters, with health minister Jens Spahn lamenting: ‘That is much too few – the pace of boosters is not sufficient.’

The German effort has been hamstrung by fighting between its vaccination committee – which has taken a cautious approach, only approving boosters for the over-70s – and politicians who want to go faster.

‘If every country waited for data before they do anything, we wouldn’t have any data,’ a frustrated Mr Spahn has said.