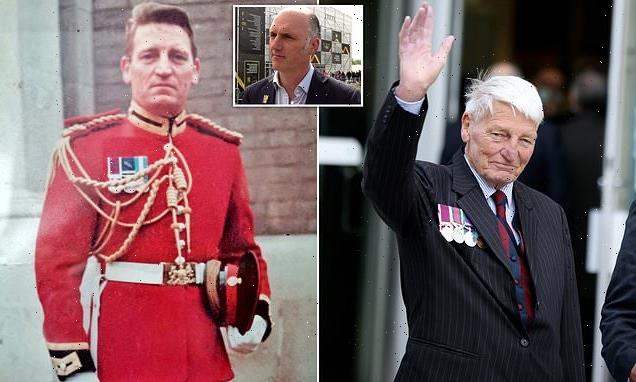 Ministers plan to ban prosecutions of Troubles veterans next month

The Government is likely to try and ban prosecutions of Northern Ireland veterans who were involved in the Troubles within the next six months, according to a report.

The plan to introduce legislation is expected to be a key pledge in the upcoming Queen’s Speech next month.

Once in place, the law is believed to put an end to trials linked to the Troubles after a number of high-profile cases collapsed due to a lack of admissible evidence.

The family of Northern Ireland veteran, Dennis Hutchings, who died while on trial last year over shooting during the Troubles, demanded apology from prosecutors over ‘lost’ evidence.

The cases relied partly on statements the soldiers gave soon after the shootings, but these were later found to be inadmissible as they were not cautioned before giving the statements.

For cases that date back decades, the trials often rely on statements like these in the absence of other evidence.

Recently there has been concern from MPs and veterans that the Prime Minister would not deliver on his 2019 manifesto commitment to block further ‘unfair prosecution’. 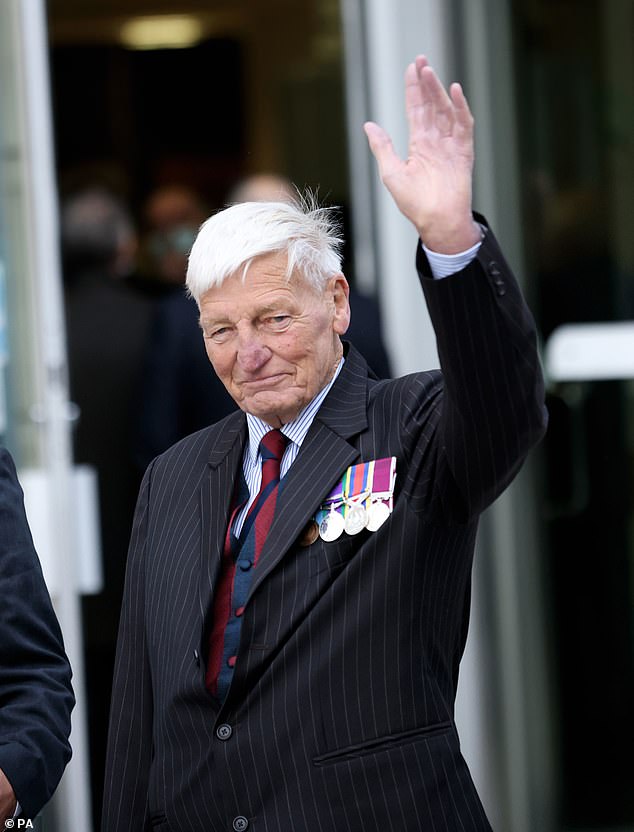 Trials for Troubles veterans like Dennis Hutchings’s, who died at the age of 80 during his trial last year, may not take place in the future amid reports the Government is looking to introduce a statute of limitations 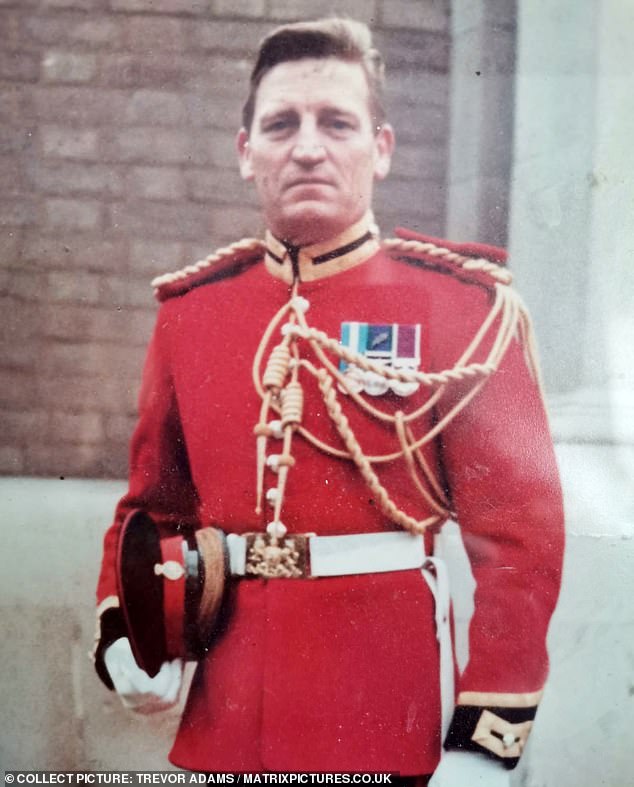 Mr Hutchings contracted Covid and died while he was on trial for attempted murder last year (picutred at  Knightsbridge Barracks, 1978) 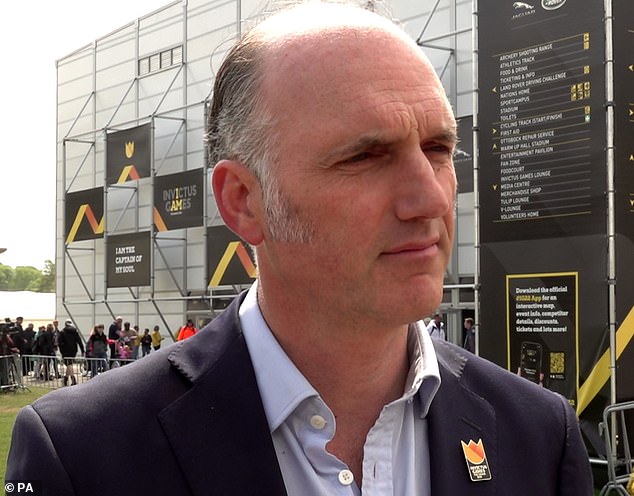 Veterans minister, Leo Docherty (pictured), hopes the bill will give veterans who were involved in the Northern Ireland operation closure

It is now expected the Legacy Bill will be pledged in the Queen’s Speech next month as part of the Government’s legislative agenda for the coming year, according to the Sunday Telegraph.

The Bill would impose a statute of limitations on criminal prosecutions for offences committed during the Troubles up until the signing of the Good Friday Agreement in 1998.

Leo Docherty the veterans minister said that he expected the legislation to be introduced within the next six months.

Mr Docherty told the Sunday Telegraph: ‘If this was easy, we would have done it already – and it is very complicated because it is Northern Ireland.

‘But, I’m pleased to say, we expect from the Northern Ireland Office a bill that will give closure to veterans of (Operation) Banner, of whom there are some 300,000.

‘We expect this bill to give closure with honour and finality and I expect that to come forward very soon.

‘It’s really about ensuring that it was legally watertight – it has taken this long because we’re trying to get it right.’

The proposals, which Boris Johnson said would allow Northern Ireland to ‘draw a line under the Troubles’. 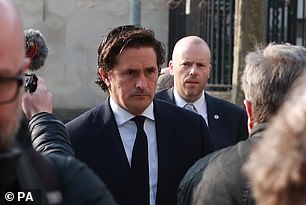 Former veterans minister Johnny Mercer (pictured), quit the role due to slow progress on the bill

But the plan has been criticised by political parties in Northern Ireland as well as the Irish Government, and a number of victims’ and survivors’ groups.

Former veterans minister Johnny Mercer, who quit as the minister last year over the lack of progress on the legislation,  said he would ‘believe it when I see it’.

Mr Mercer said:  ‘A named bill in the Queen’s Speech is a significant move forward on this legislation that should have been enacted years ago.

‘The delays have cost lives and put Northern Ireland veterans through hell needlessly. My thoughts are with them today.’

In response, a Government source told the newspaper: ‘It is absolutely our intention to include this legislation to be introduced in the third session.

‘Pressure on the parliamentary timetable meant it wasn’t introduced before the pre-election period in Northern Ireland.

‘Our hope is for a swift introduction, as we are able to bring forward proposals having reflected on all our engagement following our command paper last summer, as we promised.’ 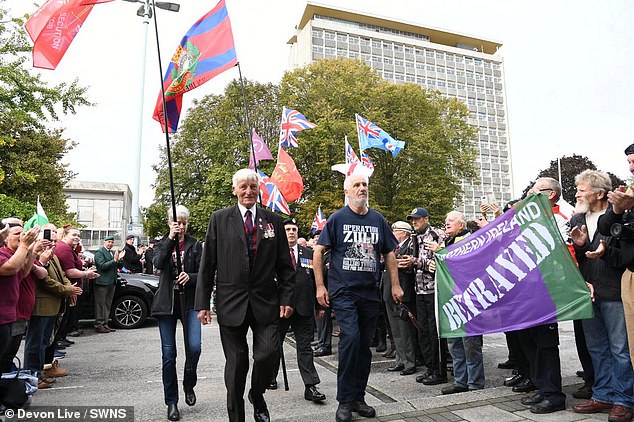 Mr Hutchings had been ill with kidney failure and required dialysis three times a week but travelled to Belfast to stand trial.

At the time, the family of the Army veteran called on prosecutors to ‘unreservedly apologise’ for bringing charges amid claims police lost key evidence.

Lawyers acting for great-great-grandfather Dennis Hutchings, ended up filing a formal complaint to police and Northern Ireland’s prosecution service insisting he should never have been prosecuted.

Mr Hutchings was accused of the attempted murder of John Pat Cunningham, 27, who was shot dead in the village of Benturb, County Tyrone, in June 1974.

In evidence presented to the court shortly before Mr Hutchings passed away in Belfast, the trial heard that Soldier B had fired ‘tracer’ rounds – which have a small pyrotechnic charge – and Mr Hutchings had not. These bullets would have left chemical residue on field dressings applied to wounds at the time, but this evidence is now presumed lost.

His legal team suggested this evidence means investigators could have established which bullets killed Mr Cunningham.

A complaint said: ‘If the police had lost the key evidence by which this could be determined, that should have been disclosed and the case withdrawn.’

Prosecutors claimed Mr Hutchings and a serviceman known as Soldier B – now dead – both fired their weapons, but they could not prove who fired the fatal shots.

This led to the former Life Guards staff sergeant being charged with only attempted murder.

What is the timeline of the Northern Ireland troubles and peace process? 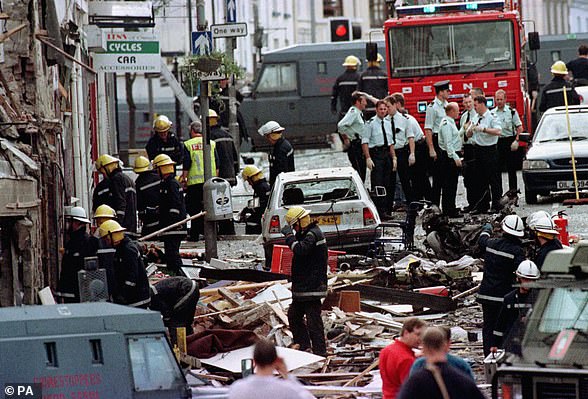 Police officers and firefighters inspecting the damage caused by a bomb explosion in Market Street, Omagh, 1998

On ‘Bloody Sunday’  13 civilians are shot dead by the British Army during a civil rights march in Londonderry.

The Stormont Government is dissolved and direct rule imposed by London.

The IRA begin its bloody campaign of bombings and assassinations in Britain.

Bobby Sands, a republicans on hunger strike in the Maze prison, is elected to Parliament. He dies a month later.

An IRA bomb explodes at the Grand Hotel in Brighton, where Margaret Thatcher is staying during the Tory Party. conference

Margaret Thatcher and then Sir John Major set up a secret back channel with the IRA to start peace talks. The communications was so secret most ministers did not know about it.

Tony Blair helps to broker the Good Friday Agreement, which is hailed as the end of the Troubles.

It establishes the Northern Ireland Assembly with David Trimble as its first minister.

With some exceptions the peace process holds and republican and loyalist paramilitaries decommission their weapons.

The Queen and Prince Philip make a state visit to Ireland, the first since the 1911 tour by George V.

In a hugely symbolic moment, the Queen is pictured shaking hands with Martin McGuinness – a former IRA leader. 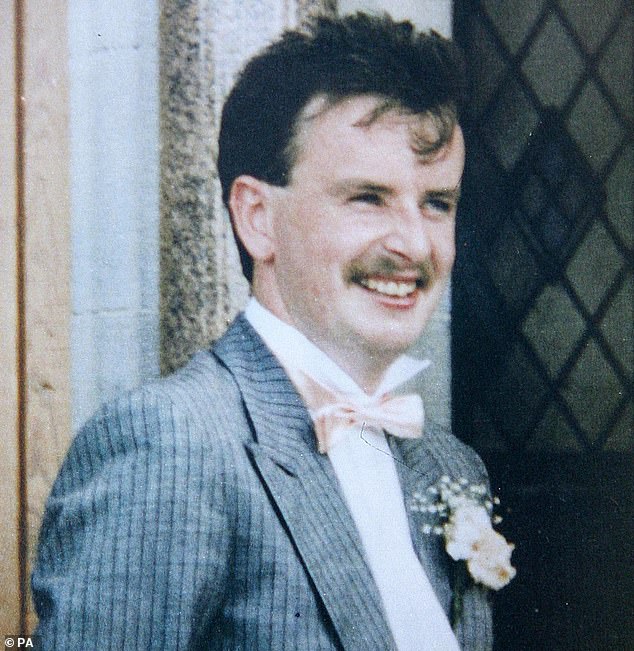 Aidan McAnespie was 23 when he was killed in Aughnacloy, County Tyrone, moments after walking through a border security checkpoint 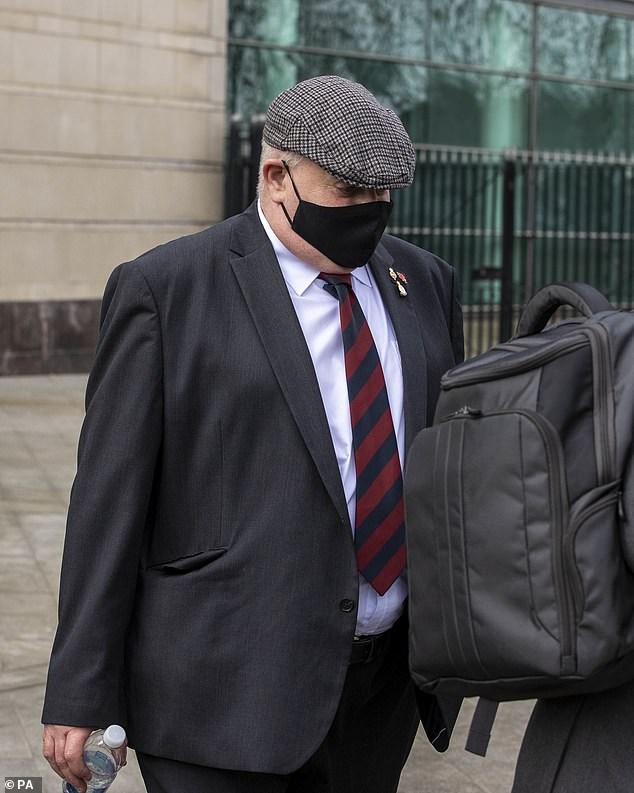 Former Grenadier Guardsman David Holden pictured leaving Laganside Courts in Belfast on March 28, where he is charged with the unlawful killing of Aidan McAnespie, 18, close to a checkpoint in Co Tyrone in 1988

This year, a soldier who shot and killed a man in Northern Ireland during the Troubles is on trial, but insisted in police interviews he accidentally fired.

The 23-year-old was killed after walking through a border checkpoint at Aughnacloy, in County Tyrone. 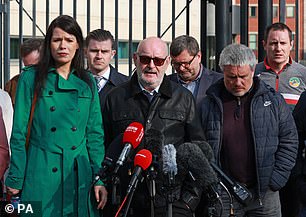 Mr Holden, a former Grenadier Guardsman who is now 52, denies one charge of manslaughter.

In 1988, he admitted responsibility for discharging the GPMG (general-purpose machine gun), but stressed emphatically that he had accidentally squeezed the trigger when moving the gun from right to left in the observation slit.

However, the new Government plans would see trials like this not take place.

But members of Mr McAnespie’s family, supported by Amnesty, said that there should not be an end to Troubles prosecutions.

Speaking outside court in March, Grainne Taggart from Amnesty said: ‘Today represents the due process that the UK Government is seeking to shut down for victims.

‘Their plans to legislate for an effective amnesty would permanently deny justice to other victims.

‘It is imperative that the UK Government heed the opposition to those proposals.’