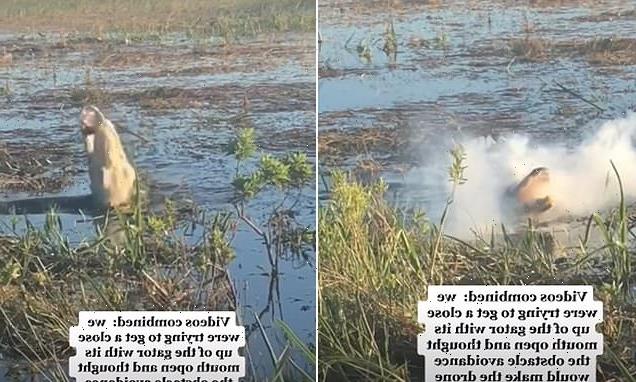 In-flight meal! Moment alligator grabs a drone out of the air and bites through the battery leaving smoke billowing from its mouth

A travel blogger has captured the moment that an alligator took down her drone in midair in the Florida Everglades.

Dev H Langer posted the footage to TikTok, where it have been viewed more than four million times.

The video shows the drone flying over the water as its operator tries to get a close up view of the alligator.

The beast, who the group refers to as George, is seen warily watching the drone as it hovers a foot above its head.

Suddenly the reptile’s head snaps up and the alligator springs out of the water and snaps down on the flying drone.

The group is left in shock as the gator begins chewing on the pricey gizmo.

Someone behind the camera can be heard yelling: ‘Oh my god, he’s eating it!’

After a few big bites, the gator seems to bite through the drone’s battery pack, and smoke erupts from its mouth and billows out in a large cloud. 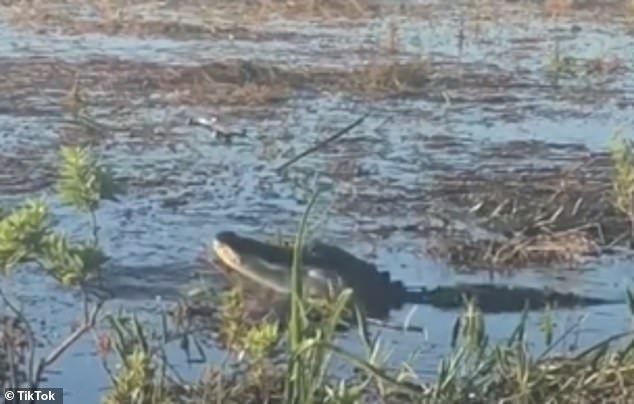 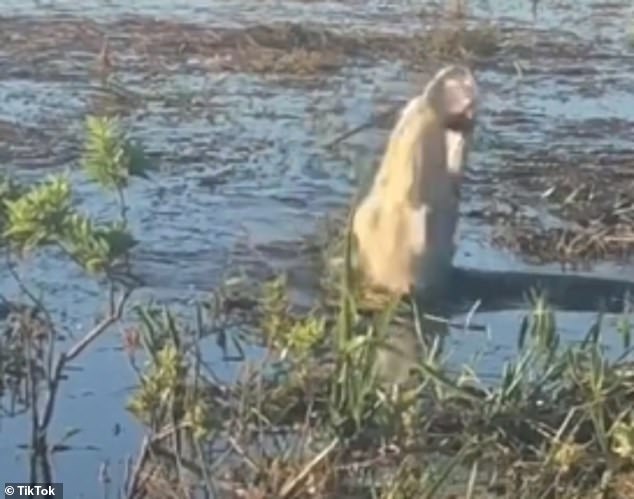 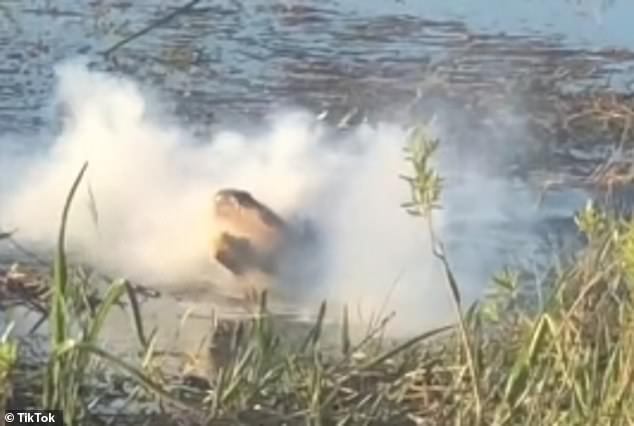 George the alligator took a big bite out of a drone, leaving the device smoking in his mouth as he bit into the battery pack 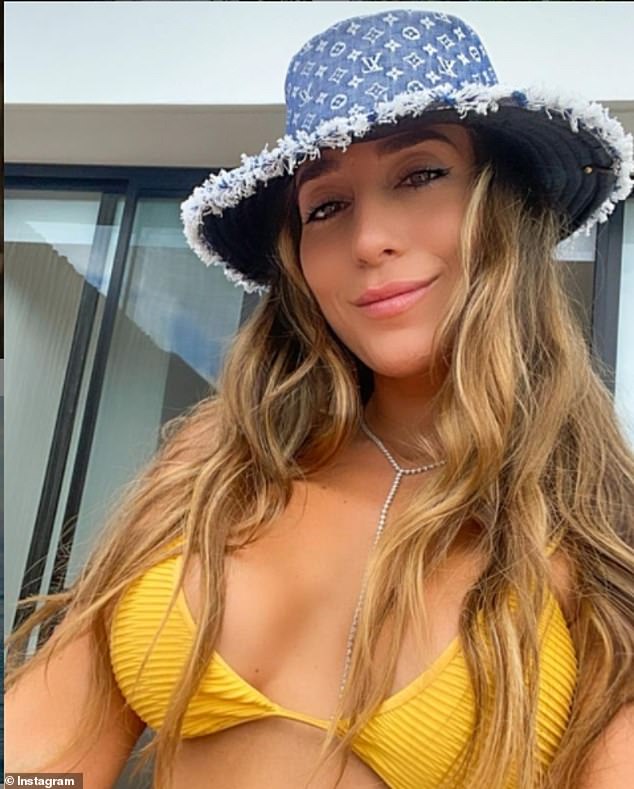 As smoke erupted from the alligator’s mouth, a man can be heard saying: ‘Oh George, no.’

As the gator goes lower underwater, smoke begins to fill the air faster.

The woman can be heard saying: ‘S**t, we gotta get out of here,’ before laughing as she continued to film.

Langer later insisted that the alligator was unharmed by its run-in with the drone, writing on TikTok: ‘George is doing fine and still looked hungry after’.

But commenters on the video were not happy, with one claiming: ‘I hope the game warden sees this.’ 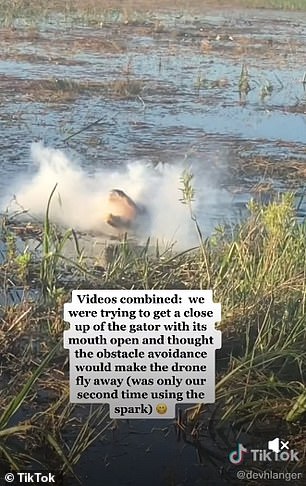 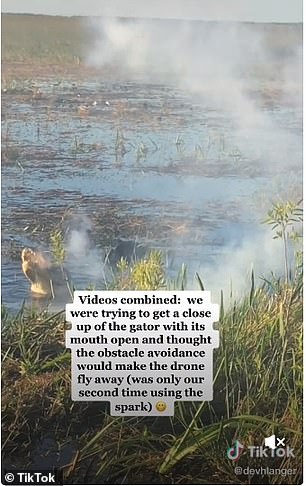 Many TikTok users were angered by the group’s behavior and worried for the animals health and safety. Other users pointed out that it is a Class 3 felony to injury or kill or attempt to injury or kill an alligator in the state of Florida 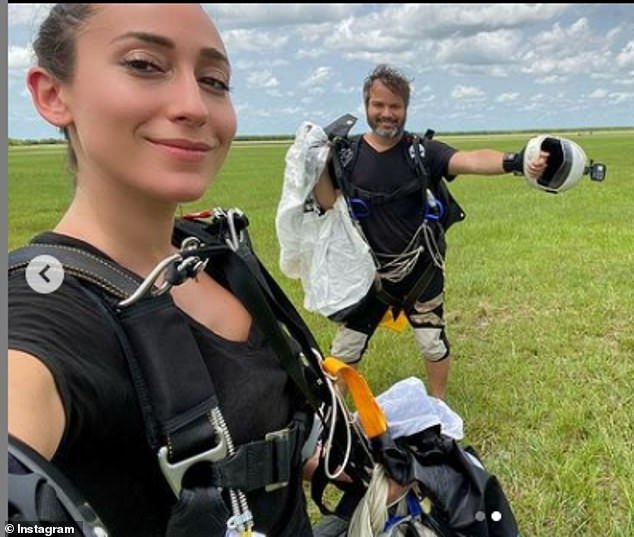 Another user, who claimed to be a Florida Department of Environmental Protection Enforcement Office said: ‘youuu reallly shoudn’t post this. There is a good chance, depending on circumstances, that you could be arrested. –  FDEP Enforcement Officer.’

Langer defended herself in the comment section by writing: ‘1) This is outside national park 2) this is on a tour 3) I’m clearly filming the drone x flying the drone 4) Accidental 5) Direct your anger at the [gator] farms.’

One user pointed out that it’s a felony to endanger an alligator in the state of Florida, writing: ‘In Florida it is a class 3 felony [to] harass or injure alligators.’

Florida law states: ‘It is unlawful to intentionally kill, injure, possess, or capture, or attempt to kill, injure, possess, or capture, an alligator or other crocodilian, or the eggs of an alligator or other crocodilian, unless authorized by the rules of the Fish and Wildlife Conservation Commission. Any person who violates this section is guilty of a felony of the third degree.’

In addition, any weapon or device used in an alligator killing will be confiscated by the Fish and Wildlife Conservation Commission.

A few other users even tagged Discovery in hopes of getting the game warden’s attention.

The Florida Fish and Wildlife Conservation Commission was contacted for a comment, but did not hear back before publication.

Ree Drummond Answers Fan Questions on TikTok: Does She Really Have Red Hair? What Food Does She Hate? 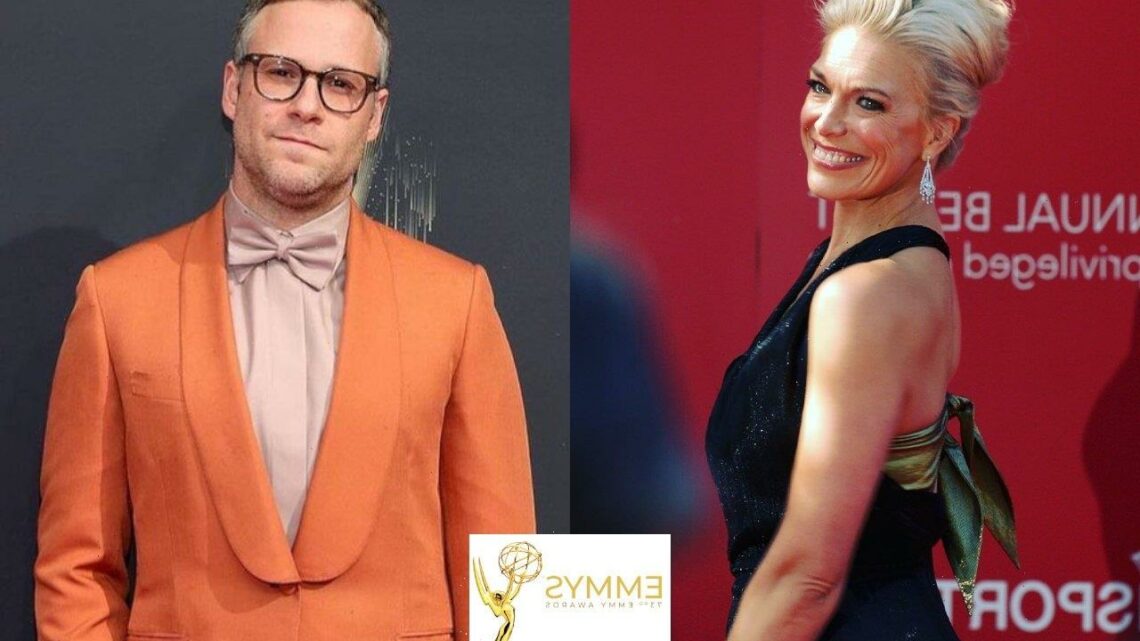 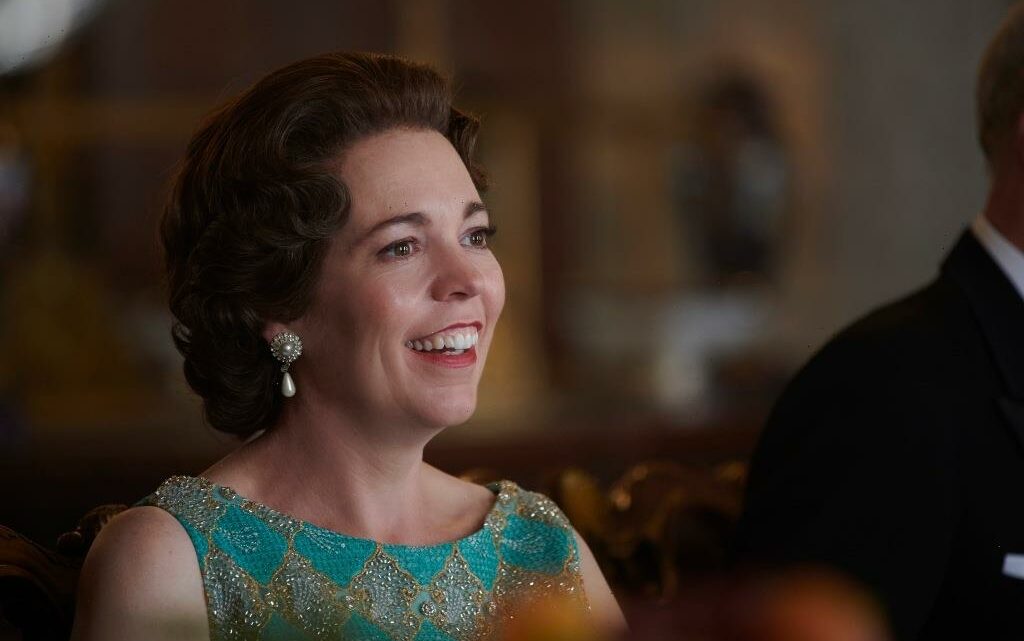