More than 90% of female doctors have faced sexism, report finds

End ‘Carry On Doctor culture’: More than 90% of female doctors have faced sexism at work including unwanted physical contact and being asked to massage male colleagues as medic calls for ‘culture shift’

More than 90 per cent of female doctors have reported experiencing sexism at work, but just a quarter of those who either went through it or witnessed it have raised the issue, a survey has suggested.

The British Medical Association said the statistics are ‘appalling’ and that their report into the problem makes for ‘shocking’ reading.

Their survey of more than 2,000 doctors found that 84 per cent of all respondents felt there was an issue of sexism in the medical profession and almost three-quarters believe sexism acts as a barrier to career progression.

More than half (56 per cent) of female doctors said they had received unwanted verbal conduct relating to their gender and almost a third (31 per cent) experienced unwanted physical conduct in the workplace.

The equivalent figures for men were 28 per cent and 23 per cent respectively.

One female junior doctor told the BMA: ‘I have been asked to massage consultants’ shoulders during surgical multidisciplinary team working.’

More than a quarter (28 per cent) of men who took part in the survey said they have or had more opportunities during training because of their gender, in comparison to just 1 per cent of women respondents.

Dr Patricia Moultrie, the deputy chairwoman of BMA Scotland, said she hoped that ‘shining a light’ on sexist behaviour would lead to a ‘cultural shift’ in the health service. 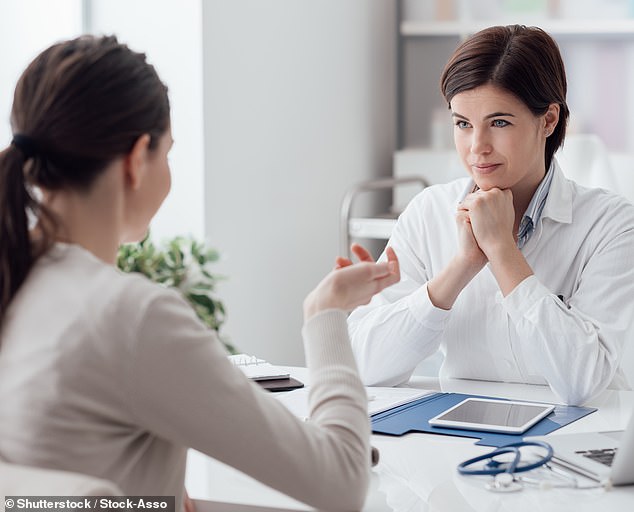 More than 90 per cent of female doctors have reported experiencing sexism at work, but just a quarter of those who either went through it or witnessed it have raised the issue, a survey has suggested

While 9 per cent of women respondents said they had never experienced sexism at work over the past two years, the figure for men was 51 per cent.

The survey and report was prompted by the experiences of a junior doctor Chelcie Jewitt, who said she had been ‘completely ignored’ by a consultant in favour of a male colleague.

She said: ‘I felt humiliated and belittled by the way I was spoken to and even though I knew I was tired after a gruelling set of night shifts, I couldn’t shake the feeling of upset and anger.

‘Two weeks after a consultant completely ignored my contributions in favour of a male doctor while I was handing over after a busy shift, I knew I couldn’t just let it lie.’

Dr Latifa Patel, the acting chair of the BMA’s representative body, said: ‘It is appalling that we are seeing these statistics, hearing these stories and talking about these inequalities in 2021.

‘The report makes for shocking reading and there is no place for sexism in society.

‘If we want to eradicate it, we all have a part to play. It’s going to take a concerted effort and it won’t be quick to fix, but sexism must stop.’

BMA Scotland’s Dr Moultrie said: ‘The Sexism in Medicine report has presented us with the stark reality of what many doctors are living with on a daily basis, gender-based discrimination has no place in our health service and the figures from this recent survey make for challenging and uncomfortable reading for everybody.

‘The report goes some of the way to highlighting the detrimental impact that sexist behaviour is still having on the medical profession, preventing people from entering particular specialties, impacting on their health and wellbeing and discouraging them from living the work life balance they want and need.

‘We can only hope that shining a light on these poor behaviours will allow for a cultural shift to a more equal, diverse and inclusive NHS.’

In a joint statement, Dr Vishal Sharma, the union’s consultants committee chair, and Dr Sarah Hallett, junior doctors committee chair, said: ‘The results of this survey are deeply concerning and show how far we – as a society – have yet to go to stamp out sexism in the workplace once and for all.’

The BMA said it will develop recommendations to address the issues raised in the report.

Overall, 2,458 BMA members responded to the email survey in March.

Of these, 82 per cent of respondents were female and 16 per cent were male while the rest were non-binary, preferred not to say or preferred to self-describe.