Home » World News » Mother, 43, whose home fell off a cliff slams council for lack of help 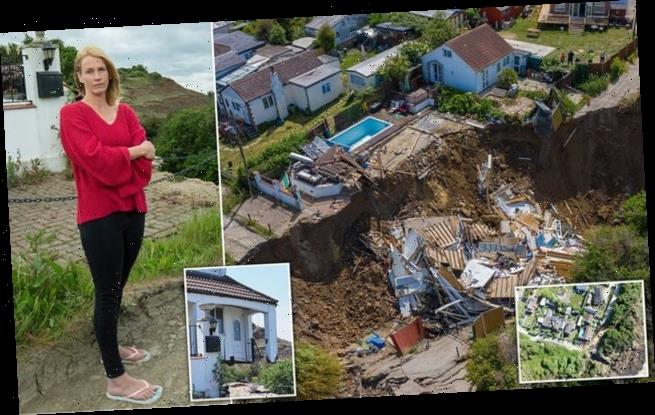 Mother, 43, whose home fell off a cliff slams council for lack of help

Mother-of-five, 43, who lost everything when her family’s £200,000 dream home fell off a cliff is still living in temporary housing five months on as she slams council for lack of help

A mother-of-five who lost everything when her family’s £200,000 dream home fell off a cliff is still living in temporary housing five months later.

Emma Tullett, 43, and her family have been living in the new accommodation since their bungalow, called Cliffhanger, plunged over the edge in June just four days after a section of the cliff collapsed, leaving a 20ft sinkhole in its wake.

Homeowners at Eastchurch’s Surf Crescent in Kent had taken matters into their own hands, working around the clock to consolidate the crumbling cliff and save their properties from suffering the same fate.

But Swale Council issued residents with a notice to stop all work last month due to ‘ecological concerns’. 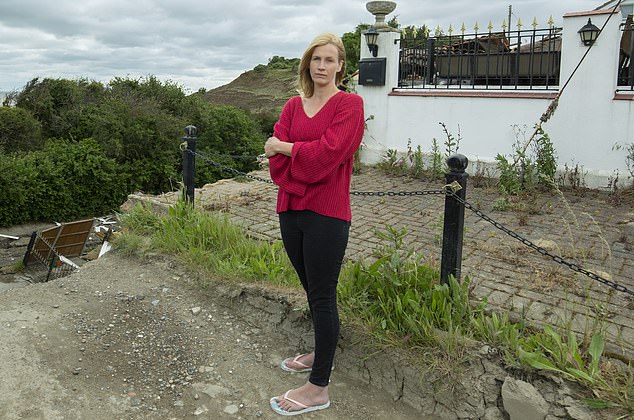 Emma Tullett (pictured above), 43, and her family have been living in the new accommodation since their bungalow in Kent, called Cliffhanger, plunged over the edge in June 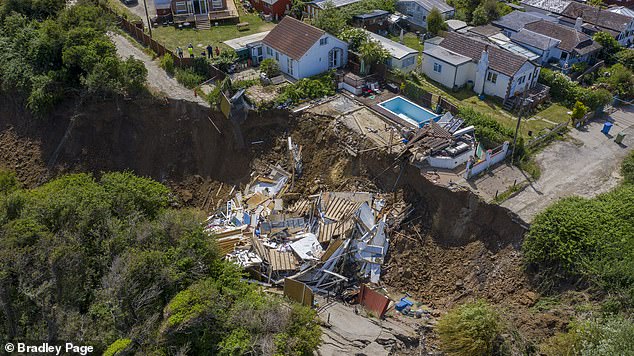 An aerial shot of the collapsed property in Eastchurch on the Isle of Sheppey, Kent, which collapsed over the edge overnight in June after the cliff began to crumble

Ms Tullett said: ‘I want to know what Swale Council plans on doing. I think the council should be doing more to help us all.’

The family have been provided temporary housing in the nearby village of Rushenden, where they have spent the past five months.

Ms Tullett said: ‘We are in a three bed with our dining room being used as a bedroom.

‘We’re here for a maximum of two years, so we need to find somewhere more permanent to live. We have got nothing back from the council or the house.’

The family were evacuated from their seafront home on the Isle of Sheppey on May 29, just four days before it all came crashing down.

Ms Tullett said: ‘That time has flown by really, but in other ways it’s dragged.

‘The one thing that got me that day was that we had noticed these cracks in the road and there was one that was going straight up through my pavement at the front.

‘When I phoned the council, they said it was nothing to do with them because it was an unmade road.

‘I phoned the Environment Agency, they said it was nothing to do with them. He said it was probably because it had been so dry.

‘He gave me a number to call on the Monday – this was the Friday – but obviously by then it was too late.’

She added: ‘Nobody wanted to know when I was trying to say something bad looked like it was going to happen.

‘Now they want to stop us putting it right?’ 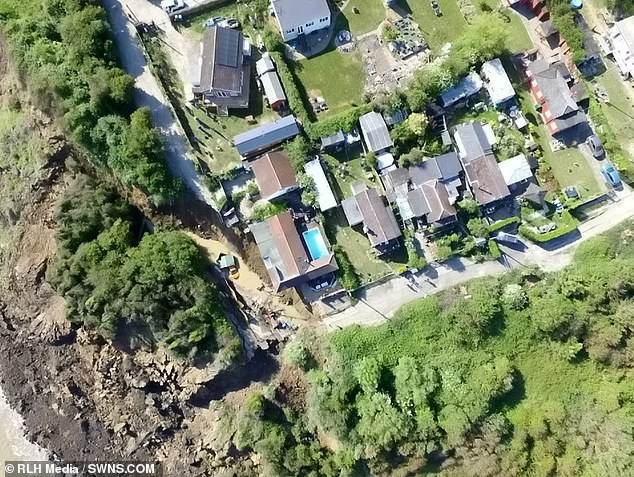 A house pictured teetering on the edge of the cliff in May, after a dramatic collapse forced the evacuation of 20 houses in Eastchurch, Kent 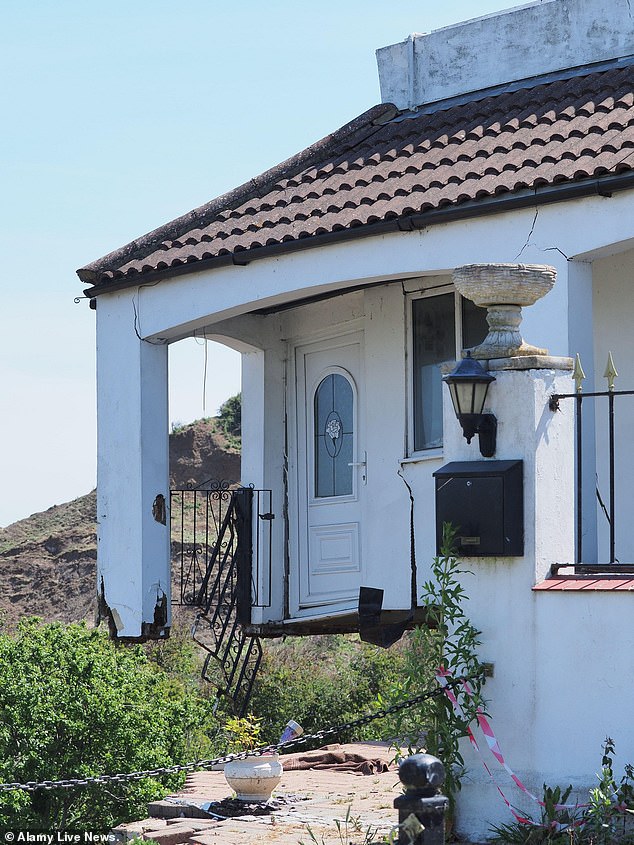 The house pictured on June 1 this year. The family have been provided temporary housing in the nearby village of Rushenden, where they have spent the past five month

The community had begun clearing up the debris, but a temporary stop notice issued by Swale council on October 19 forced them to halt any activity or face a hefty bill in court.

Ms Tullett said she was looking for ‘a fresh start’ when she moved into Cliffhanger with her partner and four children in August 2018.

She bought the property outright for £195,000, which had three bedrooms, an annexe, with two extra bedrooms and a swimming pool.

The 43-year-old, who was living in Surrey at the time, said: ‘I signed up to get emails from estate agents for different houses in Kent and a bit further, and one day I got the email through for this house and I was like oh my god, that’s what I want.

‘The views were absolutely amazing.’

On the evening of the first cliff fall, Ms Tullett was sitting in her living room with a glass of wine and her 17-year-old daughter, Becky, watching Take That’s lockdown show on Youtube.

Ms Tullett said: ‘I could hear little cracks and creaking but, living in a timber framed building, you get that anyway.

‘I didn’t think too much of it. Then the blind on the window behind me fell off the wall, scaring the living doo-das out of us.

‘My partner came in and looked and said we’ve got to go, we have got to get out. The front fence had gone.’

She continued: ‘I started running round trying to grab bits and bobs and the kids. 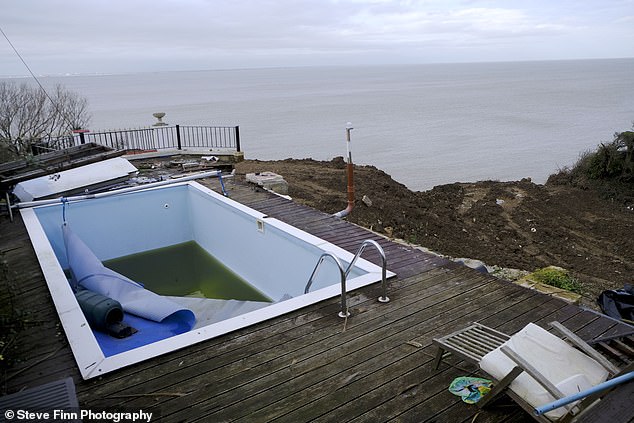 The remains of the family’s pool, which is under threat and is near the home of property owners Julian Green, Ed Cane and Malcom Newell, who all lived next door to Ms Tullett

‘I just turned into a headless chicken for a while. When we got outside, there were bricks all over the place.’

The fire brigade arrived on the scene and evacuated nearby residents after her daughter called 999.

But not knowing if their family home would be saved or not in the coming days was ‘torture’, the family says.

Ms Tullett said: ‘It was quite surreal. It’s hard to explain, but if you had a house fire, you’d have the fire and it all goes.

‘But this was dragged out over the whole weekend. It was like torture, waking up each morning thinking has my house gone yet?

‘We lost everything, our home, belongings and memories. The kids didn’t even have their shoes on.

‘Apart from phones and my bank card, everything went.’

Five months on and the family are still struggling to come to terms with what happened.

Ms Tullett said: ‘It’s still upsetting. One of my next door neighbours sent me a video of the night we were evacuated. That made me cry.’

She added: ‘It is a bit easier now, a bit like a bereavement, a few months down the line. The kids still say they want their home back. We miss summers in the garden, in the pool. 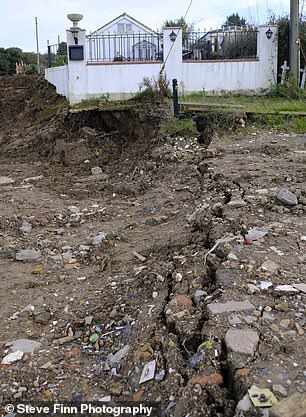 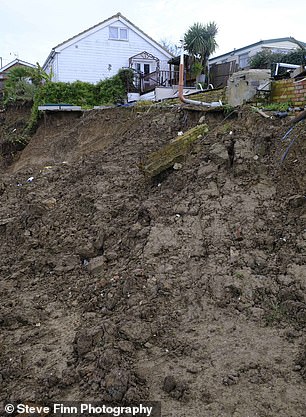 The scene pictured this week, after Swale Council issued residents with a notice to stop all work on consolidating the crumbling cliff last month due to ‘ecological concerns’

‘It was just a different way of life, in the middle of nowhere. It’s the life I wanted for my kids, walks on the beach after school, coming back muddy and no neighbours right on top of us.

The family are hoping to raise £10,000 to pay for professional assistance as they have ‘many unanswered questions’ and their neighbours homes are still at risk.

A crowdfunding page has been set up.

Ms Tullett said: ‘We have sought professional help, but this requires funds.

‘We have put everything we have towards this, cutting costs where we can, but we still need to obtain specialist reports to answer our questions.

Ms Tullett added: ‘We desperately need help to gain the answers we need, we are so close. This could help secure our future and the future of the remaining properties.

‘At the end of the day, all of these agencies knew there was erosion in the area so why didn’t they stop people from selling the houses or buying them.

‘Why are businesses still allowed to market those houses if they are not safe? If they had hazard notices on them a few years earlier, this wouldn’t have happened.

‘Something should have been done.’

A spokesperson for Swale Council said: ‘We have been in contact with the resident and we have been honest on what we can and can’t do for them, and we will continue to liaise with residents affected about potential next steps.

‘It is not for the council to do anything in relation to the lost property but we have housed them based on the our housing responsibilities.

‘The current policy remains the same as it has been for years, with no active intervention in defending the cliff, and we commissioned a specialist report to help inform the residents of what might happen in the future.’