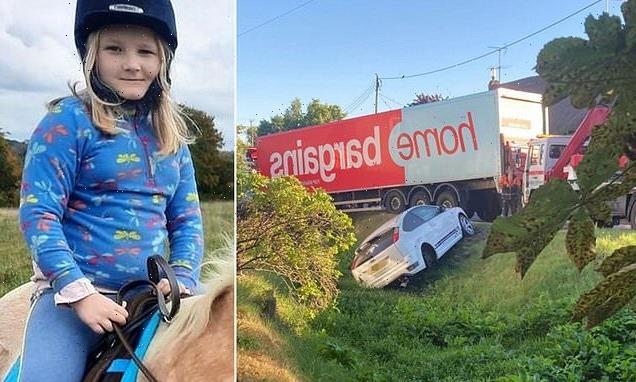 Screaming mother watched as seven-year-old daughter rode her new BMX bike down road and into HGV in crash that killed her, inquest hears

A screaming mother watched as her seven-year-old daughter cycled into a lorry outside her home in a crash that killed her, an inquest has heard.

‘Bubbly’ schoolgirl Eloise Jackson had only just learned to ride when she fatally collided with the wheels of a moving HGV metres outside her front door, a coroner was told.

Her devastated mother Laura Jackson told the hearing how she screamed and ran after Eloise as the youngster pedalled away from her down the hill and into the vehicle, which was loaded with 26 tonnes of plastic.

She said: ‘Eloise hopped on her bike despite me telling her not to. I was yelling and screaming. I went to the end of the road and came face to face with a lady who said ‘I’m so sorry, I’m so sorry’.

‘All the traffic stopped and I started screaming for someone to call an ambulance.’

Earlier this year, the Jackson family decided to leave Collingbourne Ducis in Wiltshire where they had lived for 14 years and relocate to Devizes – amid growing anger about the number of HGVs in their former picturesque village.

Calls to ban articulated lorries from the quiet roads surrounding their home in Collingbourne Ducis escalated following Eloise’s death, with residents and the local MP calling for immediate action. 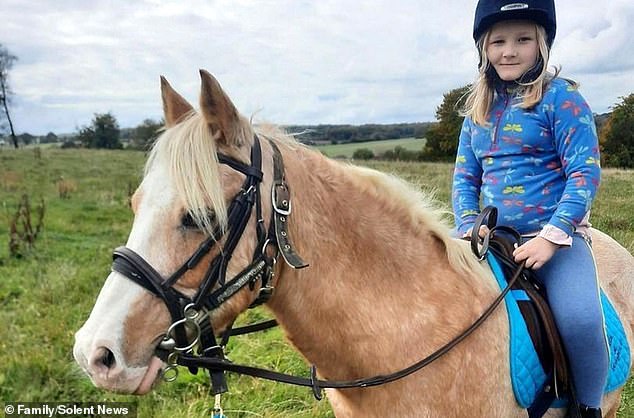 Collingbourne Ducis, which dates back to the Domesday Book and has a population of just 1,000, has seen a rise in recent years in HGVs ‘thundering’ through the tiny roads.

A petition calling for lorry re-routing and a new speed limit to protect the ‘quintessentially chocolate box’ area was launched in the wake of Eloise’s death.

Philip Palmer, a close family friend who represented the Jacksons at the inquest, said the increasing volume of HGV traffic is ‘totally inappropriate’ for the types of roads in the area.

He said: ‘The largest vehicle anticipated when these roads were made was a big horse and cart, not these six axle HGVs.’

He added that the area of road where Eloise died is an ‘accident blackspot’ which has seen other collisions – including a road fatality following a two-car crash in December 2020.

Eloise’s family and friends hope that the new road safety campaign will be ‘one of her legacies’.

Salisbury coroner’s court heard that on the evening of July 13, 2021, Laura Jackson was walking alongside Eloise as she cycled on her green BMX – which she had only recently learned to ride during the Covid pandemic.

The pair were returning home from a recreation ground near their house, where Eloise lived with her mother, her father James, a shipping clerk, and her elder sister Anaiis, 11.

The road on which they lived, Church Street, is part of the A338 which links the A303 with Swindon via Marlborough.

In a statement, Mrs Jackson, who at the time ran her own baking business, told the inquest: ‘The recreation field was just a two-minute walk away from our house. She was so happy riding on the recreation ground.

‘I was always by her side but wanted her to be more independent.’

As the pair walked home, Mrs Jackson told her daughter to avoid cycling ahead – but Eloise pedalled off down the hill.

The hearing was told keen horserider Eloise crashed into the side of a HGV which was driving past the junction directly outside the family’s home.

She was pronounced dead at Salisbury District Hospital later that evening.

PC Stephen Fair, police collision investigator, said that this was a ‘tragic collision’.

He said: ‘The HGV started moving forward before the collision. It was not travelling more than 12 miles per hour.

‘For an unknown reason [Eloise] did not stop. She collided with the wheel and tyre of the vehicle.’

A statement by lorry driver Rodney Motonga, who was not at fault for the accident, was read out.

In it, Mr Motonga said: ‘I to this day do not know how the collision happened.’

Collingbournes Road Safety Working Group is a campaign working to reduce speed and the number of HGVs using the A338 through Collingbourne Ducis and Collingbourne Kingston.

It is supported by Eloise’s Army, a project set up by Mrs Jackson to raise funds, campaign, and honour Eloise’s memory.

Mr Palmer, who is the parish clerk of neighbouring Collingbourne Kingston, described the area as ‘picturesque and quaint’.

He said: ‘We have two main problems – speed and HGV traffic. It’s always been a concern about the volume of traffic but in the last few years, people are more conscious of how many are coming through.’

He added: ‘They are thundering through pretty much constantly. We’ve had four fatalities. It’s just unacceptable.

‘It’s had a big effect on everyone here.’

He added that with a new logistics centre expected to open nearby, the ‘volume of traffic is only going to get worse’.

In another incident, one of the village’s historic thatched cottages had a near miss as recently as July when a Home Bargains lorry crashed into a nearby ditch in the early hours of the morning – hospitalising another driver who reportedly swerved to avoid the vehicle. 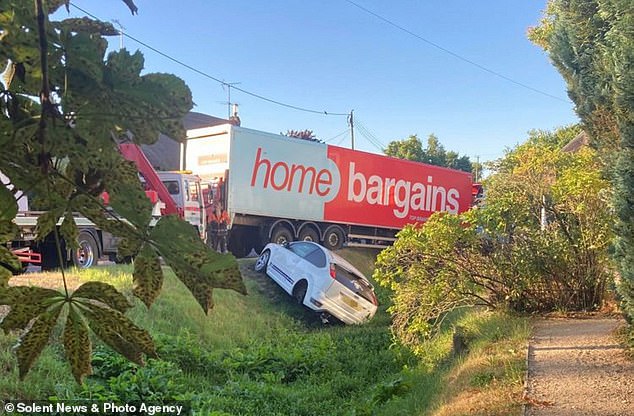 In another incident, a Home Bargains lorry crashed into a ditch in the village in July 2022 – this incident is not linked to Eloise’s

Danny Kruger, MP for Devizes, offered his support to the campaign and asked the government to ban HGVs from using the A338.

In a blog post, Mr Kruger said: ‘There have been enough tragic fatalities on this stretch of road in recent years.

‘This is further evidence of the need to control speeding but also to ensure HGVs use different routes between the M4 and the A303.’

In a Facebook post this summer following the Home Bargains crash, Mrs Jackson, who had a third daughter, Ottilie, in June, wrote: ‘The recent incident with the lorry was very triggering for us, especially being so close to the year anniversary of Eloise’ death.

‘It just shows that absolutely nothing has changed in a year, lorries still continue to pass though the tiny village.

‘The issue was not speed which killed Eloise but many vehicles are speeding through this sleepy village. On this occasion people could have died as a lorry lost control and ploughed into the river Bourne missing a house by inches.

‘Other houses have been hit by vehicles along the whole stretch of the A338 and damaged.

‘We leave Collingbourne with a bitter taste in our mouths sadly but want to thank friends that have supported us and showed compassion and continue to think of Eloise and all that we have endured this past year.’

Strictly’s Fleur East could miss out on Glitterball trophy

Cast of Princess Diana's left hand expected to fetch up to £40,000
Recent Posts