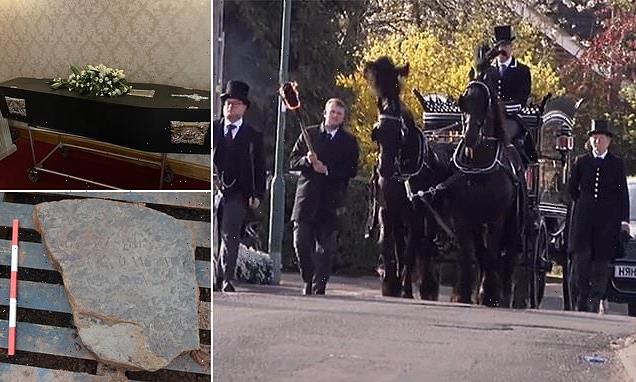 Mystery over sixteen remains that were found in an unmarked grave

The bones of 16 people found in an unmarked grave remain a mystery after experts were unable to figure out their identities despite extensive research.

The human remains were uncovered on land close to the Jaguar Land Rover factory off Damson Parkway in Solihull, West Midlands, last November.

The bones had been unearthed near to where police had been digging for 13-year-old David Spencer and 11-year-old Patrick Warren, known as the ‘Milk Carton Kids’, who disappeared from Chelmsley Wood in 1996.

The force later confirmed these bones, which date back to the 18th century, did not belong to the missing youngsters.

George John Funeral Directors held a funeral for the 16 people in April after being contacted in February about resettling the remains. 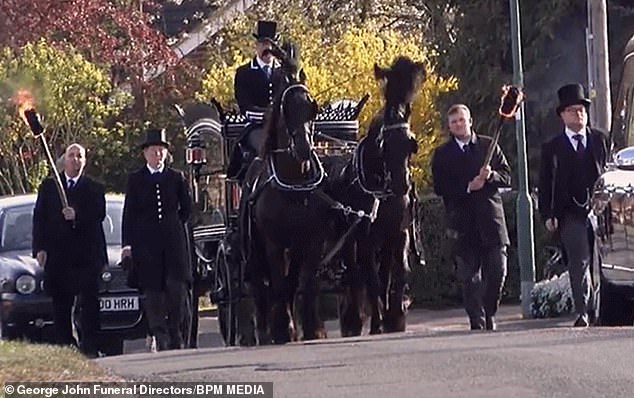 A traditional Victorian funeral being held in April for the 16 people whose remains were found close to a Jaguar Land Rover factory in Solihull, West Midlands, last November

The funeral director’s owner, George Cutler, and his team tried to trace where the bones had come from by dating the coffin handles found in the unmarked grave.

He said: ‘There were no identifiers among the remains apart from part of a headstone.

‘However the parts that we would normally need to ID the remains like the surname and the dates weren’t there.

‘We could see that it said “Sarah, the wife of” so we based our searches on that and started looking at survey maps, however there was never a cemetery in the spot where they were found. It was a bit of a mystery.’

A carbon dating test concluded the bones belonged to people who died some time between the 18th and 20th centuries.

The coffin handles were then dated back to the 1800s.

Using ancestry, old survey maps and repots on headstones in the Elmdon area, researchers surmised that the people had originally been buried in the nearby Elmdon Churchyard.

It remains a mystery as to why they ended up so far away from their intended resting place. 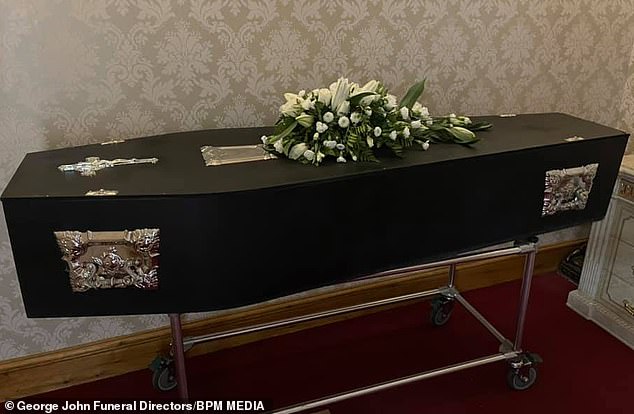 One of the coffins pictured ahead of the funeral in April. A carbon dating test concluded the bones belonged to people who died some time between the 18th and 20th centuries 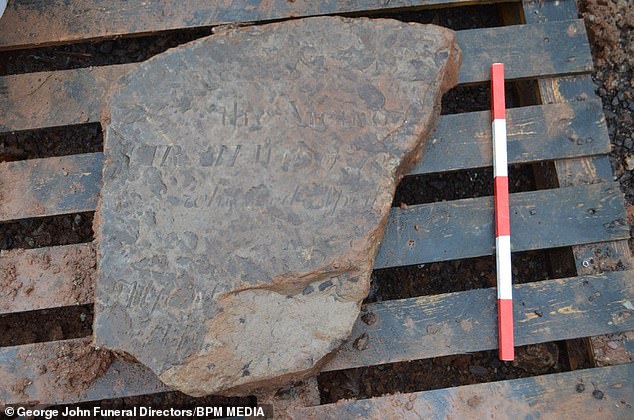 The funeral director’s team retraced the bloodline of ‘Sarah’, the woman whose headstone (above) was found among the remains, but discovered her only daughter had died

Mr Cutler said: ‘The only graveyard near there was the one at the church and when we looked into it, we were able to say that this headstone had definitely been there at some point.

‘We believe that when the church had an extension built over an older part of the graveyard, the instructions were to move these bodies to the other corners of the graveyard.

‘We can’t be 100 per cent sure it’s the same one, but when someone did a survey of the headstones after the extension, this headstone had gone missing.

‘To us, it seems as if these remains were not moved where they were meant to. We don’t know why they were so far away, but probably because it was farmland at the time, whoever did it thought no one would know.’

The team retraced the bloodline of ‘Sarah’, the woman whose headstone was found among the remains, but discovered her only daughter had died. 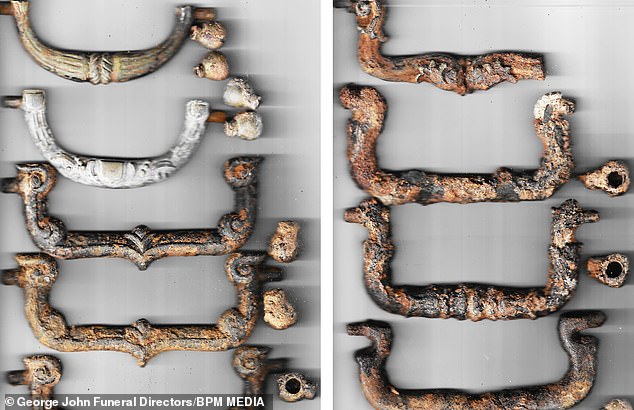 The funeral director’s owner, George Cutler, and his team tried to trace where the bones had come from by dating the coffin handles (above) found in the unmarked grave

The other 15 people could not be identified.

A traditional Victorian funeral was held for the 16 people, with a horse-drawn carriage returning the bones inside a coffin marked ‘unknown persons’ to their original resting place at Elmdon Church.

Mr Cutler added: ‘With their graves having been disturbed and moved, we wanted to put these people to rest in a way they would have been when they died.

‘We agreed with the church to use one of their very old copies of the bible and got hold of some flaming torches, which is what they would have used back then.

‘We wanted the coffin to be suited to that era so we liaised with the Coffin Works in Birmingham and they donated a set of handles too.’

He said a headstone is set to be erected at the graveside in due course.