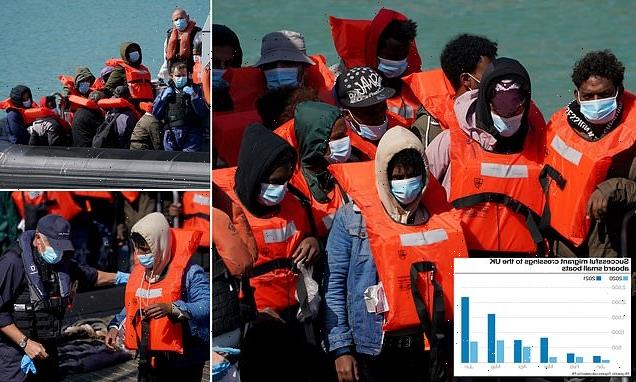 Nearly 6,000 migrants cross the Channel in first six months of 2021

Record numbers of migrants continue to make the trip across the Channel in small boats, with nearly 6,000 reaching the UK in the first six months of 2021.

The total figure for 2020 could be eclipsed within two months if the number of crossings seen in July and August last year are repeated.

The PA news agency, which tracked and analysed crossings for the last 18 months, can report more than 5,900 people have got to the UK on small boats in 2021. 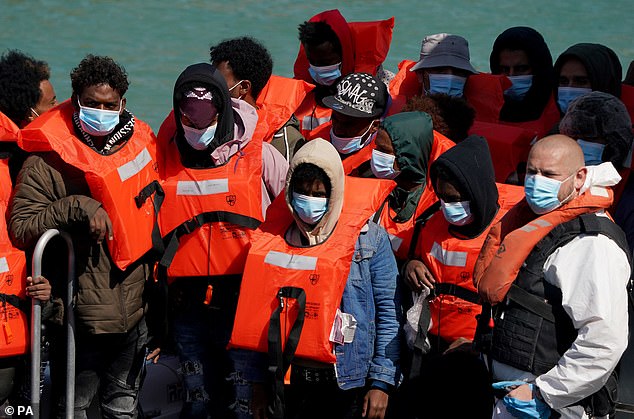 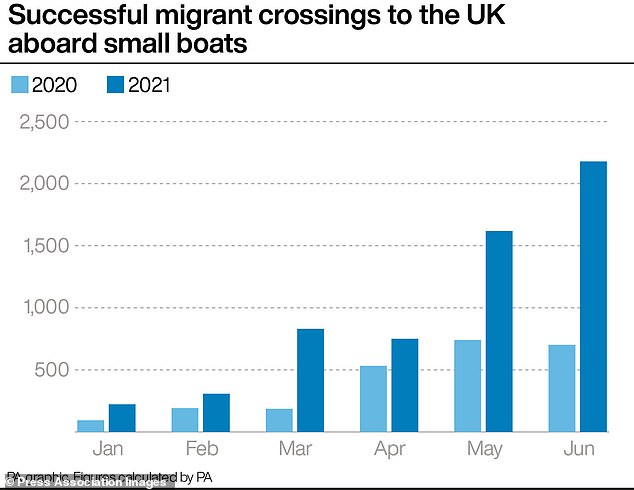 Charities have criticised the Government over the figures, accusing it of creating a ‘people smuggler’s dream’ in its quest to build ‘Fortress Britain’.

The Home Office says the crossings are ‘completely unacceptable’ and said it has ‘redoubled’ efforts with French authorities as summer arrives.

It comes amid reports Ms Patel is considering introducing controversial legislation to enable the Government to send asylum seekers abroad for processing.

Increasing numbers of people making the trip from France aboard small boats come despite the fact the busy shipping lane has claimed several lives.

In October, a Kurdish-Iranian family including small children died when their migrant boat sank off the French coast.

Home Secretary Ms Patel pledged crossings would be an ‘infrequent phenomenon’ by spring 2020.

A Home Office spokesman said: ‘These crossings are completely unacceptable and we have redoubled efforts with French authorities by increasing beach patrols, intelligence sharing and investment in surveillance as we enter the summer months.

‘As a result we have now seen over 5,000 people prevented by the French from making the dangerous crossing so far this year.

‘As organised criminal gangs adapt their approach, so will we. But to truly close this lethal route we must fix the broken system through our New Plan for Immigration, which will be firm on those who abuse the system and fair on those in genuine need of protection.’ 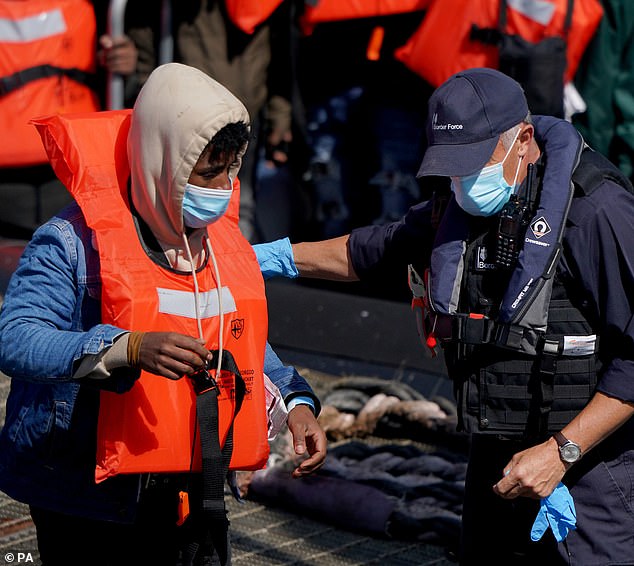 The total figure for 2020 could be eclipsed within two months if the number of crossings seen in July and August last year are repeated. Pictured: today

Despite the sharp rise in people arriving in small boats, asylum applications in the UK fell in 2020 to 29,456.

This was significantly lower than the 93,475 asylum applications made in France and the 121,955 made in Germany.

‘And their planned refugee Bill looks set to be an unworkable, unlawful and expensive disaster that will do nothing to stop refugees risking their lives on the Channel.

‘If ministers want to smash the criminal gangs, they must create more routes to safety, including family reunion schemes, humanitarian visas, and a long-term resettlement programme that welcomes 10,000 refugees a year.’

She added: ‘If she was sincere about ending the chaos she would create a humanitarian visa granting safe passage to the tiny proportion of refugees who arrive at the British border through France.

‘Everything else is fantasy, delusion and denial.’ 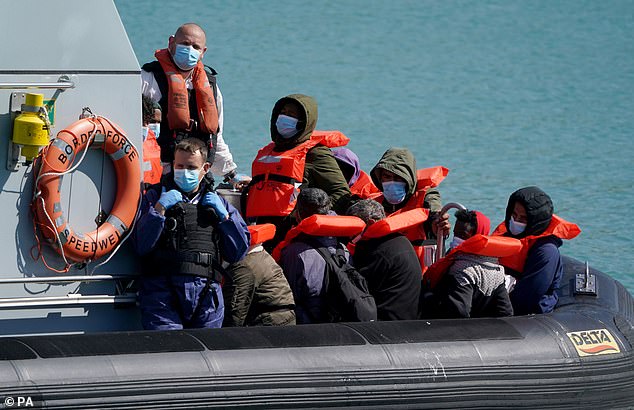 The PA news agency, which tracked and analysed crossings for the last 18 months, can report more than 5,900 people have got to the UK on small boats in 2021. Pictured: Today

Activists claim there is ‘confusion in the minds of the British public’ about who the people living rough in Calais are and why they want to come to the UK.

For years, hundreds of migrants have lived along the French coast as they wait to cross the English Channel concealed in lorries or, increasingly, aboard small boats.

Often living in destitution because of patchy support from the state, men, women and children rely on charities and NGOs for handouts.

Some have fled persecution and torture in faraway countries and seek a better life in the UK.

Tia Bush is a volunteer for humanitarian charity Care4Calais, working on the ground in the French city distributing aid.

She said the situation for the communities there is ‘really hard’, with people being evicted by local authorities on a daily basis.

Ms Bush added: ‘One of the two main settlements doesn’t have any toilets, any access to showers, any water whatsoever that’s not provided by charities and they don’t get any food subsidised by the government either, so again reliant on charities.’

She said people were ‘very much aware’ of the dangers of Covid-19 but there was little they could do about it. 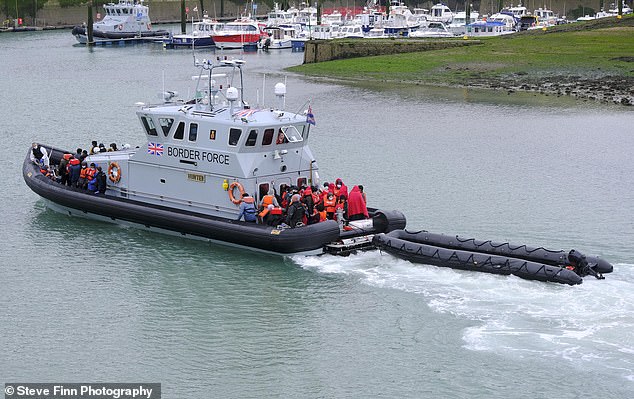 ‘I think people realise and are afraid of it but they’ve got no choice.’ People living in the camps say they have no facilities to self-isolate, Ms Bush said.

And despite the dangers involved, people are still determined to cross the English Channel to the UK, she added.

Ms Bush said: ‘People who are here want to go to Britain because they’ve got family there or because they speak the language or they’ve got other ties to the UK and that’s still as strong as ever I think.

‘Obviously however hard it is here, people have a reason for wanting to get to the UK and they hope that they’ll be safe there.’

She said some people arrive in Calais not knowing how to get to the UK, only realising on arrival that there is no safe route.

‘By boat or by lorry, people are just really scared about it,’ she added.

Care4Calais founder Clare Moseley has long been critical of Ms Patel’s approach to the Channel crossings.

She said: ‘The biggest confusion in the minds of the British public is about who the people in Calais are.

‘We have been working there for years and our absolute overwhelming experience is that they are people coming from the most dangerous countries on the planet having suffered unimaginable horrors and being absolutely deserving of our compassion and our respect.’

She added: ‘Being told that they are anything else is absolutely not true.’