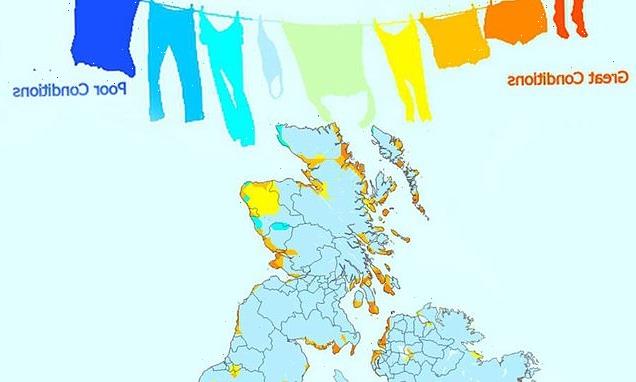 The laundry forecast! Map shows where the best drying conditions for your washing are – as new app is hailed for ‘saving pounds and our planet’

It’s an age-old problem thanks to unpredictable British weather – how do you ensure that laundry hanging out on the line doesn’t get drenched by a sudden downpour?

But technology might now have the answer, with a new app that reveals the likelihood of your washing actually drying outside.

Weather forecast firm MetDesk has launched its ‘laundry drying index’, which has been hailed by users as well as green campaigners for reducing the reliance on tumble-dryers.

The app analyses nationwide temperatures, wind speeds, risk of rain, humidity and cloud cover. A map is then compiled using colour-coding to show where the best drying conditions are.

Orange represents ‘great’ – meaning clothes dry in as little as an hour or two – while blue is ‘poor’, warning of damp conditions.

The map is also explained in a tongue-in-cheek coloured key made up of clothes on a line. 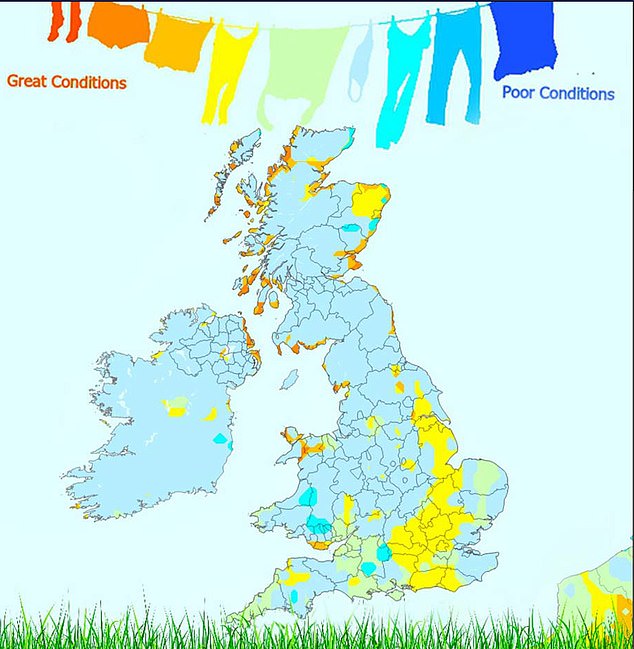 The daily updates are currently being uploaded on to Twitter by MetDesk, based in Wendover, Bucks, but the firm plans to add it to its Home And Dry weather app for Apple devices this summer and roll out an Android version in the near future.

Experts suggest the map could save users between £60 and £100 a year in electricity bills by reducing the amount of wet laundry that ends up in the tumble-dryer.

Tamsin Green, the MetDesk meteorologist who created the laundry index over the past 18 months, said: ‘It’s been well received and we’re planning to put it on the app. It stops your clothes getting wet by combining weather elements, the time of year and complex formulas in a format people can relate to. Energy efficiency was the drive behind it.’

Early users have been impressed. One, Christine Lawrence, tweeted: ‘Love it. Saw it and got two loads done and dried in five hours.’

Catherine McGarry wrote: ‘Absolute genius’, while John Seagrave said the map was ‘so useful for saving pounds and our planet’.

Bob Ward, of the Grantham Research Institute on Climate Change and the Environment, said: ‘Tumble-dryers use a lot of electricity, and using radiators to dry clothes makes them less effective. This sees technology turn complicated weather data into a useful resource.’