NEW Zealand authorities have issued an urgent tsunami warning after a third massive earthquake rocked the country in the space of a few hours.

Residents have been urged to flee inland to safety after the 8.1 magnitude quake struck off the Kermadec Islands in northeastern New Zealand on Friday morning. 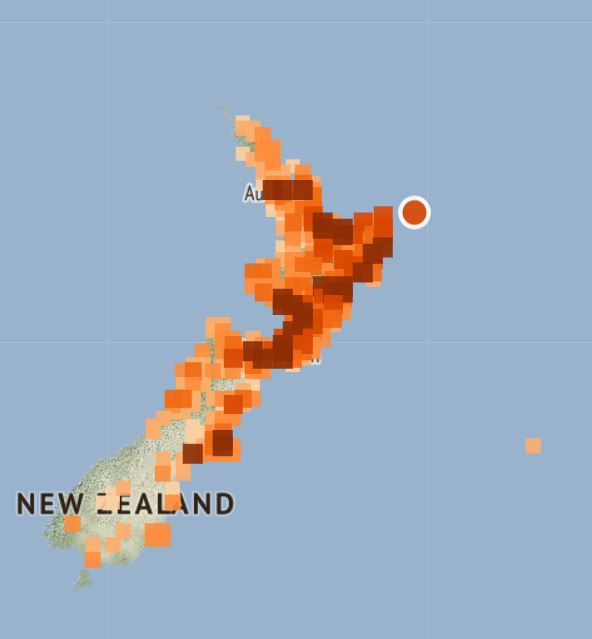 New Zealand's National Emergency Management Agency has issued a tsunami warning after the magnitude 8.1 earthquake struck around 8.29am New Zealand time at a depth of 10 km.

"People in all other areas who felt a LONG or STRONG earthquake that makes it hard to stand up, or lasted longer than a minute, should MOVE IMMEDIATELY to the nearest high ground, out of all tsunami evacuation zones, or as far inland as possible," said New Zealand's civil defence department.

New Zealand authorities have already directed people on the East Coast of the North Island from the Bay of Islands to Whangārei, from Matata to Tolaga Bay including Whakatāne and Opotiki and Great Barrier Island to move immediately to higher ground.

Earlier, residents living on the coast from Cape Runaway to Tologa Bay – a stretch of 158 km – were told to leave the area immediately after a 7.4 magnitude quake at 6:41am New Zealand time.

Authorities said the first waves may have already hit at 3.34am local time.

Waves of up to three metres are expected to strike some coastal areas.

"Coastal inundation (flooding of land areas) is expected in areas under Land and Marine threat," the Civil Defence body said in a tweet.

It added: "People near the coast from CAPE RUNAWAY to TOLAGA BAY should MOVE IMMEDIATELY to the nearest high ground, out of tsunami evacuation zones, or as far inland as possible.

"Do not return until an official all-clear message is given by Civil Defence."

"Stay 2 metres away from others if you can and it is safe to do so," it said.

Authorities said tsunami activity will continue for several hours and the threat must be regarded as real until the warning is cancelled.

"Hope everyone is ok out there – especially on the East Coast who would have felt the full force of that earthquake," Prime Minister Jacinda Ardern said on Instagram. 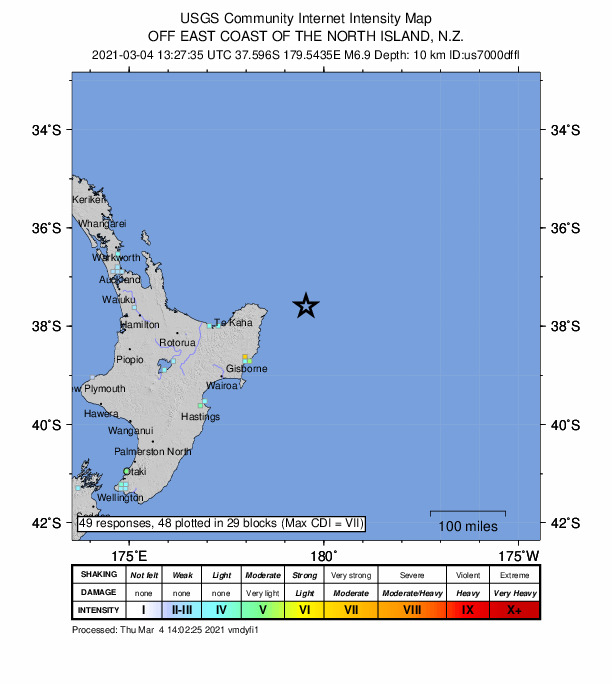 There was no tsunami threat to the capital of Wellington, but civil defence authorities asked residents across the country to stay away from beaches as there could be strong and unusual currents.

"Based on the preliminary earthquake parameters, hazardous tsunami waves are possible for coasts located within 300 kilometres of the earthquake epicentre," the centre said.

Terrified residents said the earthquake was felt more than 1,000 km away in Christchurch.

One person living in the Lower Hutt suburb of Petone in the North Island said: "Medium shake that kept rolling for a while. Woke us up."

A person living in Wellington said the quake "woke me up".

One man in Hawke's Bay – on the west coast of the North Island – said he had already fled to a higher point.

"Waiting on the Napier hill for updates. Stay safe everyone," he said.

Another woman said: "So just delivered a baby and missed a 7.3 earthquake came home to find whole family awake.

"We just drove to higher ground for tsunami evacuation. So it’s a pretty uneventful night."

Others told authorities to "use the sirens" to wake up residents.

A terrified woman said: "Was felt down here in the south island of New Zealand, house shook and was a very loud rumble! My heart is very fluttery after that."

Another man wrote: "I know everyone is very much awake now and most people are getting to high ground.

"This morning has been a rough time it’s going to be hard to see the damages done later on in the morning."

The New Zealand government's seismic monitor Geonet pegged the quake at a magnitude of 7.2 with a depth of 94 km.

More than 60,000 people reported feeling the quake on GeoNet's website, with 282 describing the shaking as "severe" and 75 saying it was "extreme".

Aftershocks were still being recorded in the area, but there were no immediate reports of serious damage or casualties.

The US Geological Survey initially pegged the quake at 7.3, before revising it down to 6.9.

Australia's Bureau of Meteorology has confirmed that there is no tsunami threat to Australia.

A magnitude 6.3 quake hit the city of Christchurch in 2011, killing 185 people and destroying much of its downtown.