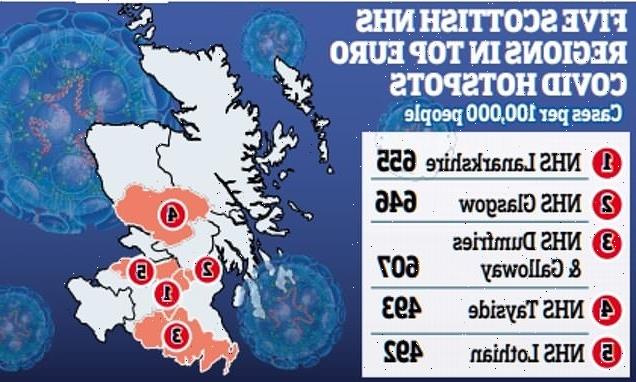 Don’t risk economic recovery with a new lockdown, Nicola Sturgeon is warned as Covid cases in Scotland soar to record high with return of schools

Scotland’s economic recovery could grind to a halt if draconian coronavirus restrictions are brought back, Nicola Sturgeon was warned yesterday.

Despite growth across Scotland’s businesses bouncing back from the pandemic faster than expected, fears were raised that progress will be hampered by ‘devastating’ Covid rules.

The Scottish Fiscal Commission (SFC) said the more optimistic projections, which will see the economy recover from the pandemic two years earlier than expected, depend on there being only ‘minimal’ restrictions in place.

The SFC’s new economic forecasts yesterday projected that gross domestic product (GDP) will rise by 10.5 per cent in the current financial year to the end of March 2022, up from its previous estimate of 7.5 per cent earlier this year. 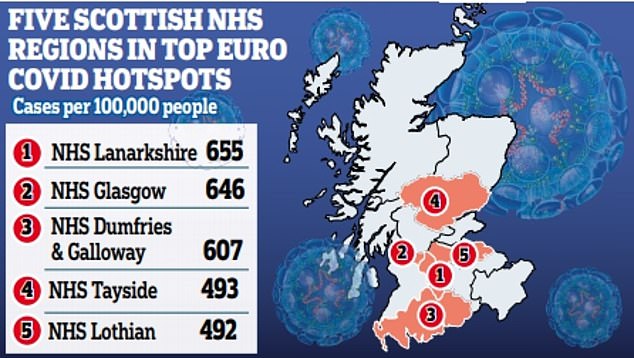 But Miss Sturgeon said she could not rule out reimposing Covid restrictions after confirmed cases rocketed to a record high this week.

Health experts also expect limits on numbers at gatherings, the reintroduction of physical distancing and even a ‘circuit breaker’ lockdown to be considered by ministers as part of efforts to halt the rise in cases.

It comes as Scotland’s five worst Covid regions were named among the 15 areas worst affected in Europe. 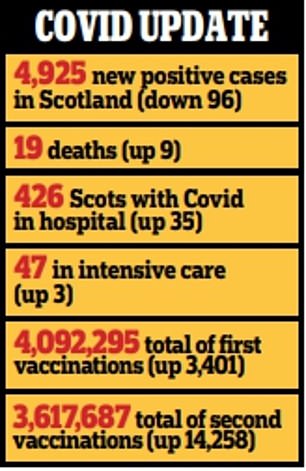 On Wednesday, Scotland reached a record for new cases as numbers soared above 5,000. Yesterday the number of deaths registered in a 24-hour period hit the highest for more than a month. Scottish Conservative leader Douglas Ross said: ‘Nicola Sturgeon should be honest about the Government’s plans and inform people immediately if she is even contemplating a return to the most damaging restrictions.

‘Returning to a strict lockdown in the near future would be devastating. That should not be on the table, now that our vaccine scheme has been so successful.

‘Severe restrictions are unthinkable, without the imminent threat of a new variant. Covid is not overwhelming our NHS, it is under pressure because of the SNP’s poor plans, such as the flimsy PR pamphlet they produced this week.

‘Nicola Sturgeon promised time and again that the vaccine scheme would allow us to move forward without restrictions, yet her Government already seems to be planning for their return.

‘Our fight against Covid should now focus on increasing the pace of the vaccine rollout among younger people and by improving the Test and Protect system, not by returning to damaging restrictions that would crush our economic recovery and impact mental and physical health.’

The SFC, the Scottish Government’s economic forecaster, said its latest prediction shows the economy is rebounding faster than was anticipated in January, and highlights the success of the vaccination programme.

It also forecasts 6.7 per cent growth this calendar year, nearly four times higher than its January forecast of 1.8 per cent in 2021. It says the forecast of 10.5 per cent growth is ‘mainly fuelled by household consumption as it reverts to pre-pandemic levels’. It added: ‘We now expect GDP to reach its pre-Covid-19 level in [second quarter of] 2022, almost two years earlier than forecast previously.’ 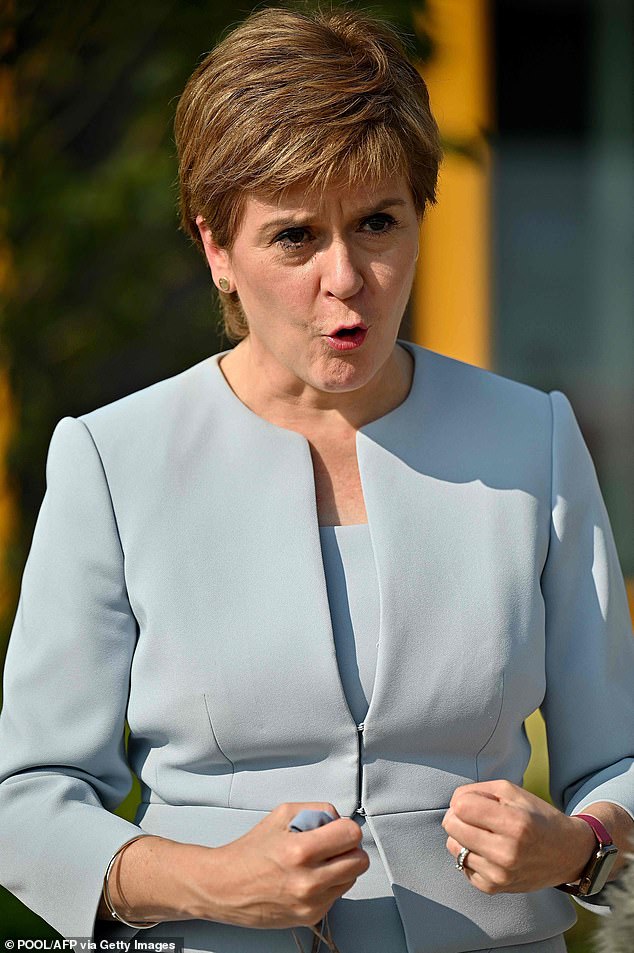 The SFC report says that it has assumed that cases may ‘rise again significantly for periods’ but there will be no future waves of rapidly rising deaths and hospitalisations and that public health restrictions ‘remain minimal’, allowing ‘a more positive outlook compared to our January 2021 forecasts’.

Dame Susan Rice, chairman of the SFC, said: ‘There are still risks to recovery. We are all mindful of the possibilities that the vaccines may not be effective against new variants, or that the protections they offer may wane over time in a way that can’t be countered by a booster programme.

‘The Government is clear that in the event of significant pressures on the NHS they would consider heightened health restrictions, and all that that means for the economy.’

The SFC now estimates employment will rise by 1 per cent this year, earnings by 5.1 per cent and productivity by 0.6 per cent.

Income tax forecasts have been increased by £899million to £13.16billion, while inflation is expected to rise by 4 per cent by the end of the year.

A public health source close to government planning told The Times there are two main options to respond to the rise in cases: a ‘circuit breaker’ lockdown where the economy is shut completely for a period, or moving back through the lockdown framework stages.

But government officials pointed to comments from Miss Sturgeon on Wednesday, when she said: ‘I don’t want to go back to anything like a full lockdown.’

Asked about the likelihood of a ‘circuit breaker’, Christine Tait-Burkard, an infection expert at Edinburgh University, told BBC Radio Scotland’s Lunchtime Live: ‘It is a possibility for really slowing down the spread very fast. We know that that does work.

‘Many people will be wary of the fact that a lot of the circuit breakers have become very permanent, which is a situation that we don’t want to find ourselves in any more because of mental health issues and other consequences.’

She said the next couple of weeks are ‘critical’ and the reopening of Nightingale hospitals and bringing in the Army should be considered to cut the strain on hospital staff.

A Scottish Government spokesman said: ‘There are currently no plans to reintroduce Covid restrictions but it is important that everyone plays their part in suppressing the virus. We are monitoring the situation daily.’