Home » World News » ‘Not being as forthcoming’: Concerns over infectious removalists as apartment building placed in quarantine

‘Not being as forthcoming’: Concerns over infectious removalists as apartment building placed in quarantine

Victorian authorities are concerned two removalists from NSW who dropped off and collected furniture in Melbourne while infectious haven’t provided a complete picture of their movements.

COVID-19 response commander Jeroen Weimar said he expected more information could emerge about the pair, who hadn’t been as “forthcoming” with authorities as he would have liked.

Victoria recorded one new coronavirus case on Tuesday unrelated to the removalists; a member of a family of four in the City of Hume, in Melbourne’s north, who has been in isolation. They were the third person in the family to test positive.

Mr Weimar said there was a permit in place for the removalists. They drove from NSW to Victoria on July 8, dropping off furniture at a home in Craigieburn before heading to Ariele Apartments complex in Maribyrnong, where they collected furniture over a number of hours.

They then drove to the town of Ballan, stopping at a Mobil service station and a McDonald’s. 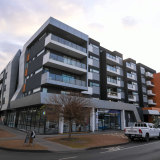 The Ariele Apartments in Maribyrnong.Credit:Eddie Jim

One of the removalists had a shower at the service station and they stayed in Victoria overnight, before driving to Adelaide.

“They’re not being as forthcoming, or their recollection is not as accurate as I would like it to be, the level of information [that] is coming through is not as fulsome as I’d like, and … just the sense of clarity is not emerging as quickly as we would like,” Mr Weimar said.

“There was a permit in place, and the permit has very clear obligations within it.

“What we need people to do though is to comply with the obligations in those permits, which includes you’re in virtual isolation when you’re in Victoria, you need to wear a mask, you need to be socially distant, you need to stay in your cab at all times, and you’re not doing five hours of removalist work in an apartment building.

“So, we’re concerned about that, and that’s part of the conversation we’re having.”

Mr Weimar said he understood one of the two infectious removalists was a primary close contact of another positive coronavirus case in Sydney.

But Mr Weimar stressed that authorities had a “good grip” on the information they’d been provided about the cases so far. He was pleased with authorities’ response to the removalists’ infections, given they’d identified two different families who’d been exposed to them and two places they’d travelled through on their way from Victoria to Adelaide.

Mr Weimar said 21 exposures had been confirmed at the Mobil service station, and 34 at the Ballan McDonald’s.

He said the removalists dealt with only one man while they were at the Maribyrnong home and he had tested negative, as had his family and the Craigieburn family. All were in quarantine. 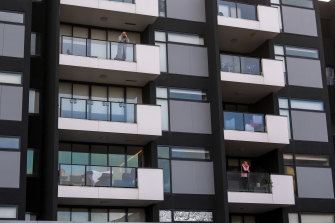 The apartment building in Maribyrnong, in Melbourne’s north-west, that is in lockdown. Credit:Eddie Jim

All 78 apartments in the man’s complex, though, had been put into lockdown, with residents informed on Monday night they had to quarantine for 14 days.

“It is very confronting, of course, to be advised late on a Monday evening that you’re now in 14 days of isolation,” Mr Weimar said.

“We have set aside additional testing capacity at the showgrounds [for the residents] … and we’ll be working with them over their isolation period providing the kind of … wraparound support that you would expect us to do.”

Mr Weimar stressed that nobody at the apartment complex had so far tested positive for coronavirus.

Western Public Health Unit has sent residents of the complex a letter, telling them if they were in the residential part of the complex during the exposure period on July 8 they had to immediately isolate, get a COVID-19 test and quarantine for 14 days.

“The public health assessment has identified a risk of transmission in the apartment complex, and that any person who was inside any residential parts of the building from 1pm on Thursday, July 8, may be at risk of developing COVID-19 infection,” the letter said.

The letter noted the “residential part of the complex” includes the residential foyer or lobby, stairwells, the lift, residential floors and the car park. The removalists would have spent some time in those areas.

Acting Chief Health Officer Dan O’Brien said Victoria had faced outbreaks from interstate before, and they still posed the biggest risk to the state.

“We obviously remain very concerned about our inbound risks from interstate. We’ve now had four incursions from NSW in recent weeks, and our COVID outbreaks in May and June are also linked to interstate incursion.”

Mr Weimar confirmed two people who were meant to be isolating under a red-zone permit after returning from NSW weren’t at home yesterday when health authorities checked in.

Tuesday’s new case, the City of Hume family member, came after three members of the family flew into Melbourne from Sydney on July 4 on a red permit, meaning they were required to self-isolate for 14 days and get tested, while a fourth drove back to Melbourne on July 8.

Health authorities do not believe either the flight or Melbourne Airport is a risk because the three family members tested negative for the virus on July 6, two days after disembarking.

The three family members who tested positive to coronavirus in Victoria have 13 household primary close contacts, all of whom have tested negative, authorities say.

The positive cases – two parents and a child – have been in isolation with a fourth family member.

Mr Weimar said during Tuesday’s COVID update authorities had identified more than 300 contacts of the family through contact tracing. All of those people had been contacted.

“We suspect … the fourth member who is currently negative may also turn positive in the coming days,” Mr Weimar said.

People who didn’t enter the residential part of the building and only went into a commercial space on the ground floor are not classified as having visited an exposure site.

Nearly 23,500 COVID-19 test results were processed in Victoria in the past 24 hours, and nearly 14,400 people received their vaccine doses.