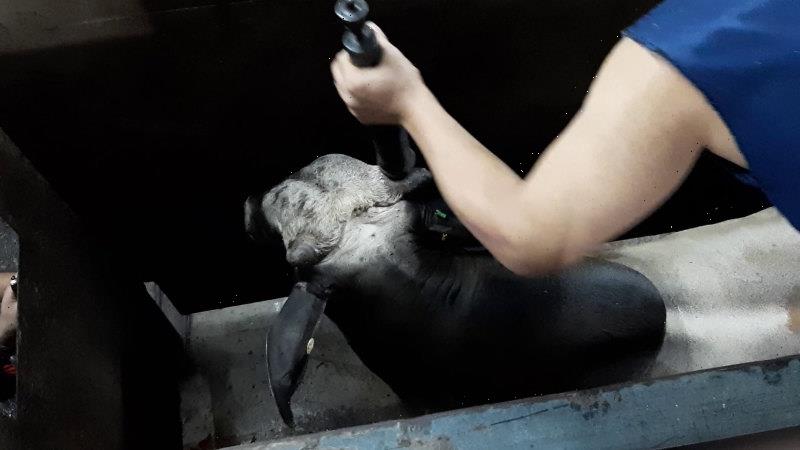 Singapore: Inside an abattoir in Indonesia’s West Java province, a Brahman cross calf is struck twice with a stun gun from above and rolled out onto a concrete platform for slaughter.

A worker approaches to hold its head as it is still kicking and struggling, while another arrives with a knife to cut its throat.

As another dying animal is heard gurgling nearby, the first one begins to bleed out.

Ten minutes later, after it has been dragged on a chain and hoisted by its front legs, a worker begins to hack at it with a knife and it begins kicking powerfully again. It is soon lowered to the floor and workers turn their attention elsewhere. Another four minutes later, it comes to rest after a violent thrashing of limbs.

The incident was filmed by undercover investigators from the Asian arm of People for the Ethical Treatment of Animals at one of seven Indonesian facilities where Australian cattle are received and processed.

This vision, and other footage viewed by The Sydney Morning Herald and The Age, was captured in April and May this year on visits to five abattoirs on Java and two on Sumatra, according to PETA Asia.

The contents have been the subject of an ongoing investigation by Australia’s Department of Agriculture, Water and the Environment since July but not previously revealed.

At another of the slaughterhouses near Jakarta, a steer is jabbed with a metal prod dozens of times and has its tail twisted to the point of breaking, to force it to stand up again after a failed stunning attempt.

At three other facilities, cattle are also shown still kicking up to five minutes after having their throats cut, while at two Sumatran abattoirs, the animals are sliced open without first being shot with a stun gun.

The latter procedure, halal slaughter, is not outlawed under the Australian government’s self-reporting Exporter Supply Chain Assurance Scheme established in the wake of a live export scandal 10 years ago.

But animal welfare experts such as Dr Bidda Jones, the RSPCA’s long-time chief scientist and strategy officer, are adamant that it should be.

“I don’t think there is an argument for continuing to allow unstunned slaughter of Australian cattle in Indonesia,” she said.

Jones has examined the vision collected by PETA and is most concerned by the apparent pattern of ineffective stunning.

“There were signs [cattle] were potentially still conscious during the slaughter process,” she said. 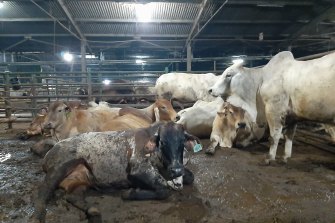 Live cattle exports from Australia accounts for 25 per cent of all beef consumption in Indonesia.Credit:PETA Asia

“[The workers] are not actually checking. They’re not doing the required [check] to make sure that the stun is effective.”

While a degree of unconscious involuntary movement after slaughter is common, she said the animal in the West Java abattoir had shown clear signs of breathing and occasional vocalisation long after its throat was cut.

“We’re talking extreme pain for potentially 10 minutes,” she said. “You’ve got to make sure that doesn’t happen.”

Jones believes the new footage indicates that the unnecessary suffering may be more widespread.

It’s an argument disputed from within the $800 million live-export industry, which was forced to clean up its act following the appalling images taken by Animals Australia in Indonesian facilities and aired by ABC’s Four Corners in 2011.

The operator of the West Java facility told the Herald and The Age that an extensive audit was carried out there after the PETA Asia footage was sent to Canberra this year and “nothing was found”.

The manager of the facility near Jakarta said it had received no complaints.

There are more than 500 approved facilities for housing and slaughtering Australian cattle in Indonesia.Credit:PETA Asia

“It is important when these isolated instances occur, direct and corrective action is taken,” chief executive Mark Harvey-Sutton said in a July statement to which the Herald and The Age was referred.

“Exporters and importers immediately engaged the facilities as to why the handling of the cattle was not up to ESCAS standards and subsequent non-compliance occurred.

“Exporters who have supplied cattle to those abattoirs are working closely with importers to jointly address the individual non-compliances with specific solutions.”

PETA alleges multiple breaches of the Exporter Supply Chain Assurance Scheme standards, which include that “livestock must not be subjected to procedures that cause pain and suffering”, and of the World Organisation for Animal Health code, which forbids violent acts like crushing or breaking tails and states that any animal showing signs of recovering consciousness should be re-stunned.

‘We treat the cattle well. I’m an animal lover myself. I have almost 5000 goats.’

A spokesman for the Department of Agriculture, Water and the Environment said it was still investigating.

“ESCAS requires exporters to have arrangements with supply chain partners in importing countries to provide humane treatment and handling of feeder and slaughter livestock from arrival up to and including the point of slaughter,” the spokesman said.

“Exporters who have failed to comply are required to put in place corrective actions and measures to reduce the risk of recurrence. It is then a decision for the individual exporters whether to choose to export under the required conditions.

“In response to the reported ESCAS non-compliance, the department has required exporters to introduce corrective procedures to prevent re-occurrence, and has applied a higher level of auditing oversight to the implicated facilities.

“The department may take regulatory further action if required, prior to completion of an investigation.”

The department recorded 45 incidents of so-called “critical non-compliance” in the trade between 2015 and 2020, according to a review by Ross Carter, the inspector-general of live animal exports. Eight of them were animal welfare issues.

Indonesia accounted for only 7 per cent of the cases — 30 per cent were in Vietnam — but a rogue abattoir in Aceh province was banned from supply chains last year after vision was captured of cattle having their tails pulled and legs roped, workers sitting and standing on animals’ heads and slaughtering taking place in a car park.

The facility was one of more than 500 approved to house or slaughter Australian cattle in Indonesia.

It is big business. Even though rising prices and the impact of the pandemic drove down the number of Australian cattle imported by Indonesia last year from a peak of nearly 700,000 in 2019, Australian live exports represented 25 per cent of Indonesian beef consumption, said Meat and Livestock Australia.

The value of Australian live cattle exports to Indonesia in 2020-21 was $577 million, more than double that of the $287 million of boxed beef processed in Australia and sent to the archipelago.

However, after years of animal rights groups challenging the legitimacy of Australia exporting livestock, the latest claims of mistreatment in Indonesian facilities are placing new scrutiny on the industry.

It is a decade since then agriculture minister Joe Ludwig announced live cattle exports to Indonesia were halted for six months as he reacted to horrific evidence of cruelty including of animals being hacked to death with blunt knives.

The suspension ultimately lasted closer to six weeks after new regulations were rushed in but the reverberations of the Gillard government’s decision are still being felt, with the Federal Court last year finding the ban was unlawful following a class action led by a cattle station owner in the Northern Territory.

Dr Lynn Simpson, a former veterinarian on live export ships turned industry whistleblower, argues the images taken inside Indonesian slaughterhouses this year demonstrate there is still work to do.

A cattlewoman herself, she said workers “certainly shouldn’t be breaking tails”, and of the post-slaughter movement of cattle she noted that “three to five minutes is a long time”.

Slaughter without stunning should be eradicated, she believes, saying there is no reason it is needed when halal meat is almost always produced in Australia for export and domestic consumption without cattle having to be conscious when their throats are cut.

“Overall, those particular slaughterhouses are operating at what appears to be a higher standard than what was seen [in 2011],” Simpson said after viewing a package of vision from five of the facilities.

“So we’ve made some progress, but there are still breaches being made.”

There are others in the red-meat industry, though, who question why Australia is still exporting live cattle at all, saying it could instead export more domestically processed beef and invest in better refrigeration.

PETA opposes live exports and has called on the Australian government to potentially seek criminal sanctions over the mistreatment of cattle.

“We want to remind the public that this is still happening,” said PETA Asia’s Marcel Tjandraatmadja.

“It’s not necessary. You don’t have to export animals live overseas. I think it is shocking and people need to be reminded.”